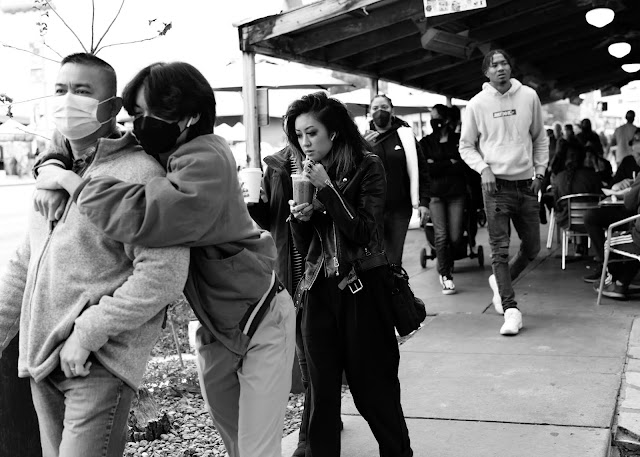 Loving the diagonal.
I spent some quality time walking up and down Austin's current "most popular" tourist area this weekend. That would be South Congress Ave. or, as some locals call it, "SoCo." The street is lined with trendy restaurants, boutique hotels, coffee shops galore and many, many local and national retailers. If the weather is nice the sidewalks are crowded and the outdoor coffee shops even more so.

While I was walking along with my camera it occurred to me on Saturday that I'd been out on that popular walkway for the better part of two hours and in all that time, passing by hundreds and hundreds of people, I had not seen a single person carrying or using a dedicated camera.

Sure; there were plenty of people taking selfies, group shots or photographs of buildings that amused them but not one...single...person carrying a Canon, Nikon, Sony, Leica, etc. Had this same venue existed when I first became interested in photography I can assure you that every second or third person would have had their Pentax, Olympus, Nikon or Canon over one shoulder, usually on a wide strap with colorful embroidery.

Later in the weekend, yesterday, it was beautiful outdoors. The temperatures in the afternoon were barely into the 70s and the sky was post-rain, clean and beautiful blue. Downtown as getting its dose of new Christmas lights and ornaments. Shop windows boasted new displays and the coffee shops were doing good business. But, again, not a single person in the whole of downtown that I walked through had any sort of camera other than what was included with their phone. In the space of a couple of years cameras have vanished. Just vanished.

And it's not like Austin isn't a tourist destination. In 400 yards of walking on Second St. I heard Spanish, French and German spoken by different groups people. And, I think, one of the Scandinavian languages as well... but in all groups from everywhere else --- no cameras. None. Non-existent.

At first I considered that this might be the result of a demographic shift; that younger people were so glued to their phones that any other implementalia would just be a distraction for them. But dashing my assumption was a preponderance of silver-haired tourists. And, again, no cameras. No zoom lenses. Nothing.

You may live in a city that has far more tourist traffic than does Austin and you may still see people out photographing with real cameras but I think Austin is somewhat of a "canary in a coal mine" city that tends to trend out stuff a bit ahead of the rest of the country. And it looks like we're done with cameras.

Personal anecdote: I swim with a number of people who are somewhere around my age or younger. Three of them in the past week have, in an off-hand way, asked me if I'd like to have their cameras. Not an offer to sell, none of them need the money, but an offer to present the cameras to me as a gift; with no strings attached. I demurred and suggested they donate to one of the photo programs at the community colleges. I don't need extra cameras either. But it's telling that, to a person, they told me the cameras hadn't been used since the person acquired some recent generation of smart phone which answers all their needs for photography.

I think we've hit a tipping point and I wonder if it's equally reflected in declining sales from the major camera makers. It's my assumption that, with the exception of people who "need" to use a camera for specific work or art tasks, that we are witnessing the slow but accelerating death of all manner of traditional cameras; mirrorless or DSLR. The grim reaper of old trends isn't differentiating.

Writing this in no way implies that I think we should quit our jobs as photographers or stop enjoying our hobby or passion as photographers. It's just an observation. I intend to go on just as I have been and merrily sporting cameras around town. It's just that I  fear I'm going to start sticking out like a neon brilliant sore thumb in short order...

Electronic Shutters. For those of us who might keep using and buying cameras I think we're about to experience another one of those technology shifts with our gear. First Sony and now Nikon have introduced cameras with electronic shutters that have jumped over the hurdle of working well with flash sync and also reading out information fast enough to combat obvious rolling shutter effects. What was required to let makers eliminate the necessity for mechanical shutters was sensors that can read out tons of information at a deliriously fast pace along with processing components that could handle the torrent of data with equal dispatch. And I think we've hit that spot.

I don't see this as necessarily a big win for buyers and users of the gear. We have cameras now that offer both electronic shutters and mechanical shutters and the ability to switch seamlessly between the two at need. We can have good flash performance and very fast shutter speeds in the same box.

Yes, the images that are taken with fast electronic shutters will now have less rolling shutter effect or motion artifacts but I think few users really experienced problems from these things since the mechanical shutters do a great job right up to 1/8,000th of a second, in most of the popular cameras. Sure, now it's easier to shoot 20 or 30 fps with the electronic shutters but when has that ever been a rational and passionately felt need?

What this really means is that camera makers will be able to remove the very last set of parts that materially affect camera reliability: the actual, mechanical shutters. After the removal of moving mirrors with the introduction of EVFs a few years ago the mechanical shutters became the single most frequent reliability weak spot in all current cameras. They are fragile and all of them, no matter how great and wonderful the camera, eventually just wear out. Some far sooner than others. As the camera manufacturers move to make electronic shutters the only shutter in their cameras they are removing a big headache for themselves. They will reduce the amount of warranty work required by a huge amount. They will eliminate the entire structure of moving parts. In theory, once the investment in fast processors is amortized the cost savings should be profound.

But don't worry. The cost savings will NOT be passed on to consumers. No, I'm betting that camera makers will market the electronic shutter as a new feature and something highly desirable. And you'll pay more for it. Instead of reading advertising about dynamic range or megapixel count get ready to hear breathless accounts from the camera maker's influencer lackeys about how shooting at 20, 30 or 50 fps has changed their lives....how they are able to capture the more perfectly perfect moment in time. The ne plus ultra of fleeting expressions. And be prepared to withstand their condolences for those poor schmucks whose cameras limit them to only 8 or 10 frames per second. A whole swath of users relegated to shooting only things that don't move. At all.

The New Virus. Ah shit. We're back in the middle of the pandemic again. I just ordered another 100 face masks because we tend to go through them as quickly as kitchen paper towels. Once again I'm putting much desired travel plans on hold. Once again I'm anticipating clients extending their work-from-home policies (and no "face to face" photography policies) and once again I'm bracing myself to hear from a bevy of brain dead conspiracy theorists who, if they would just shut up and get their vaccines, could possibly have helped prevent this latest outbreak ..... or at least minimized its consequences.

I'm trying to look on the bright side. Another lockdown means I won't be buying a couple of business class airline tickets to Europe or Japan any time soon. I might as well use that budget for something over the top like a Leica S3 medium format camera and some lenses. I'm not getting any younger waiting around for everything to open up again. Maybe blowing a huge amount of cash will trigger my usual personal consequences. Meaning that the minute I drop twenty or thirty thousand dollars on a camera system I don't need the virus will mysteriously vanish and I'll have to start saving for airfare all over again. I might have to take this path as a community service.... you can thank me later...

So, what are you up to on Monday morning?

Final thought in reading around the usual suspects this morning: Are we of a certain generation condemned to live in the past and endlessly cherish the products and trappings of our youth? Is it ever okay to accept the current state of the art and enjoy it or are we forever joined at the hip with The Beach Boys, Cool Jazz, Bitchin Camaros, and analog? Is that Lady GaGa on my stream? I think so....

ADDED ON FRIDAY MORNING: Someone was foolish enough to disagree  with me about the constitution of users of Facebook. They had a whole song and dance about how Facebook was like a retirement home. I prefer facts over "fake news" so I looked up the age demographic of Facebook on a global scale. Here's screen capture: 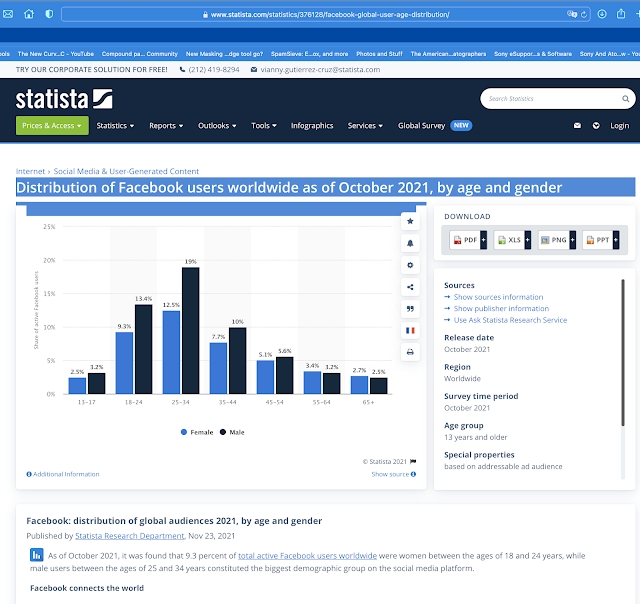 Go to this site for more "real world" information. Not just stuff you thought up over morning coffee...

We Moderate Comments, Yours might not appear right after you hit return. Be patient; I'm usually pretty quick on getting comments up there. Try not to hit return again and again.... If you disagree with something I've written please do so civilly. Be nice or see your comments fly into the void. Anonymous posters are not given special privileges or dispensation. If technology alone requires you to be anonymous your comments will likely pass through moderation if you "sign" them. A new note: Don't tell me how to write or how to blog! I can't make you comment but I don't want to wade through spam!