An interesting product introduction from Leica....Or is it Sigma? No, maybe Leica. Hmmmm. 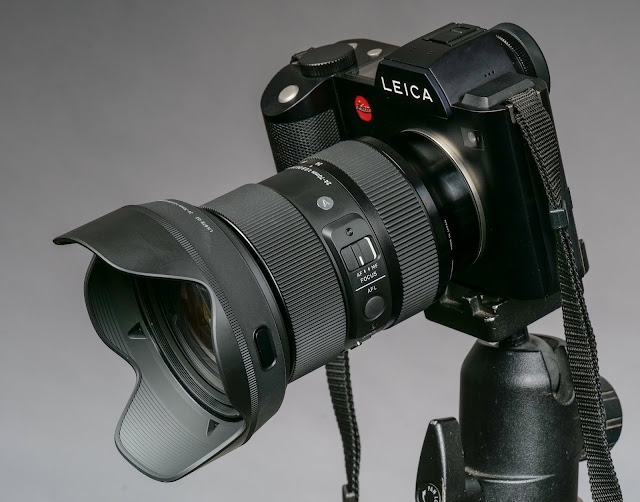 A "made in Japan" lens on a "made in Germany Leica"? Sure. Why not?
It's been done over and over again during the last few decades.
(lens shown is the Sigma...).

Photographers far and wide-flung seem to all crave the 24-70mm f2.8 zoom lenses that promise more bokeh and, hopefully, really good performance. There is also a secondary group that values a bit more reach over that one euphoric stop more. They are more attracted to the 24-105 or the 24-120mm lenses available for nearly all of the major systems.

When Leica first brought out their initial SL camera; called, "the SL", the only "standard" mostly fast standard zoom offered was their 24-90mm f2.8-4.0 model. It's a behemoth. A very sharp and capable lens to be sure but one hampered, in the eyes of non-Leica photographers, by three things: Its weight, its price and the fact that the aperture fades to f4.0 as one zooms towards 90mm. It's also big. And, did I mention pricy? Currently it crushes through credit limits at a frothy $5,500 USD. Leica owners will be less reticent to embrace it believing that in some ways it's superior to the rest. But....yikes! Variable aperture!!!

To better compete in the market Leica decided they needed to offer a real 24-70mm f2.8. But unlike the 24-90mm which was designed and produced completely in Germany they decided they could save a bit of R&D money and time if they collaborated with Sigma (this is conjecture, but pretty obvious to me...) and used the same optical design and ingredients as Sigma's highly successful Art Series 24-70mm f2.8 lens.

Side by side the Leica lens differentiates itself from the Sigma by cloaking it in a different lens barrel and applying their trademark yellow lettering to the lens. The Leica lens is purported to be an all metal construction while the Sigma uses a combination of metal and thermo-plastic miracle stuff. Both are advertised as dust and weather resistant and both are marked, in small letters on the bottom of the lens barrel, "made in Japan."

Most pundits have rushed to spin this as Leica having picked up an existing Sigma lens design that they liked and buying the guts to put into their own outer packaging. Of course, we could give them the benefit of the doubt and mull over the idea that perhaps the two companies collaborated on the optical design from the very outset. I don't know. And I'm not an investigative journalist so I doubt I'll dig around to find out.

From every review I've read the $1,100 USD Sigma lens is an example of one of the best performing, standard, fast zoom lenses in its class. Equal in most ways to the Sony G Master product and at least as good as the Canon and Nikon versions. Sure, there will be small trade offs here and there but, for the most part, a very, very good performer.

The Sigma lens (DG DN version) has been available for the E mount and the L mount cameras for about a year now. So it was surprising when Leica announced their "new" product. They are asking around $2,800 for their lens in its minimalist, stripped down field dress. Or roughly three times the cash compared to the Sigma. I'm sure there are some old Leica hands that will line up to buy the lens for their SL systems if for no other reason than the name on the lens barrel and the (mistaken?) idea that Leica will have done much more quality control on their version, supplied it with some secret, miracle lens coating, or waved a magic Wetzler wand over the finished lenses in order to apply invisible German pixie dust to the glass elements before lovingly placing it in boxes and shipping it out.

But having come face to face with Leica's vaunted quality control in the past I would not be holding my breath.

On the other hand, this is a phenomenal marketing win for Sigma. It basically calls out the Sigma optical design as "good enough" to pass Leica's strict standards for optical systems. And look! You can have your own copy, without the Leica dressing, for a fraction of the price. That's like Bentley car shoppers finding out that the engine in the car they desire is actually made by Toyota and that the same engine is available in a Toyota, with the same performance, for a couple hundred thousand fewer dollars. It would certainly be a winning marketing statement for Toyota. I'd make bank on that if I were their marketing agency....

What's a Leica toting photographer to do? Depends on which side of the wealth curve you occupy. If you actually have to think about purchases and costs (most of us) then you have already sorted out the issue. You go with the Sigma for "same performance/one third the price." If you are dancing around in the 1% you ignore this new Leica lens from Japan and grab a couple of the original, German made  24-90mm Leica lenses. Get a few extra in case you misplace one of them.

I was interested to try one out so I got one from Precision Camera and I'll probably go out tomorrow and put it through its paces on one of the Leica bodies. The cost of the lens at Precision Camera is usually $1100 but they have them on sale in the L mount version this weekend for a paltry $950 USD. If it's as good as all the "experts" claim it would be silly not to snag one.

More to come as I metaphorically crack this lens open and set how it ticks.