Sometimes the camera makers get it right with the first model. Then they change it. The changes might appeal to new buyers but what if you love the old one? 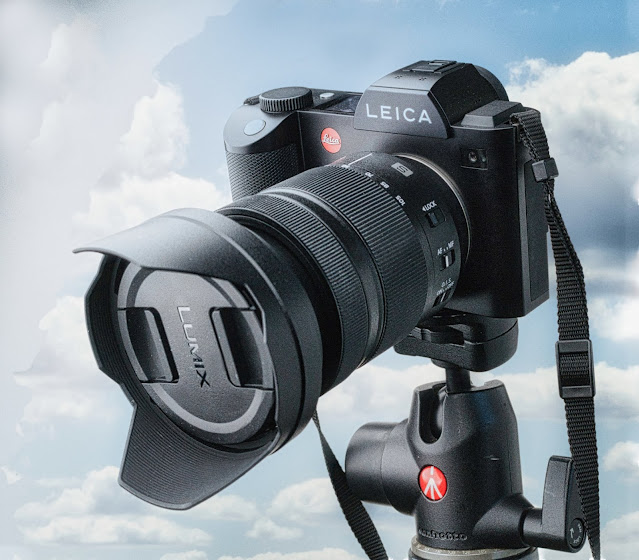 You can start with the presumption that I'm crazy as a rattlesnake on a sun drenched, asphalt road in August but I think there are some things that don't necessarily get better as they are changed and "improved." A case in point for Leica users of a certain type would be the differences between the Leica SL and the newer "much improved" Leica SL2. I prefer the older model. It's more "pure."

The newer camera (and the even newer SL2S ) delivers a higher resolution viewfinder and a faster processor. It also changes the back-of-camera, physical buttons. While the original SL as four unmarked buttons the SL2 has only three main buttons, all of which are labeled. While I have been told that few changes were made to the actual camera body between the SL and the SL2 there are enough differences that stand out to me that I know they are not the same. The SL is a bit more industrial and most of the front of the camera is not wrapped in leather. It also feels thinner than the newer camera and it doesn't have the same indent in the grip area which so many people seem to like. I prefer the less sculpted grip. (who walks around carrying a big camera one-handed, and by the grip?).

When I bought the SL2 the 47 megapixel flagship, I was torn between it and the more video-oriented, 24 megapixel SL2S. But both the bodies are identical, except for the blacked-out logo on the 24 megapixel model (which I think is a huge mistake...).

If one had never used an original SL and acquired first the SL2 they would not understand my assertion that the SL was pretty much perfect by the time its production run ended. While the finder is inarguably better on the newer camera, just by dint of improved EVF screen tech, the new camera seems "softer" and less defined to me. And while the menus are prettier in the SL2 I like the way the menus are accessed and presented in the SL much better. I also like the look of the older camera better too.

There are several design touches that appealed to me on the older body as well. One important feature being the way the strap lugs are incorporated flush to the sides of the camera. On the newer camera they stick out from the body of the camera which is something that will catch on clothes, etc. It also looks cheaper and as though the lugs were tacked on as more of an afterthought.

While the SL2 was far more expensive to buy than a used SL I quickly found that I was keeping the newer camera in the top drawer of my filing cabinet but taking the SL out with me on just about every outing. When I shoot in the studio the SL2 is nice and fine. But for walking around in the streets the industrial aesthetic of the older camera seems more apt.

If I could only choose one Leica mirrorless camera as a professional tool I'd instantly choose the newest SL2S because it's a great 24 megapixel, full frame photography camera and it's also the best of the bunch for video production. But, if I already owned a camera like the Panasonic S1H, which is a wonderful video camera, and just wanted a camera to shoot fun, zany, abrupt street photos, fine art photos and stuff like that I'd be searching for a nice, mint, used SL. There is just something about it that is more magical than its successor.

After a day of shooting with the SL I bought (originally as a back-up camera for the SL2) I fantasized that the perfect way to shoot ART photography, in the streets or in remote locations would be to have two identical camera bodies that are truly amazing fun to shoot with, along with two smaller, prime lenses. I think two Contax/Zeiss lenses would fit the bill nicely, for me. Just a 28mm f2.8 and the 50mm f1.7.

One on each of two identical camera bodies. One over each shoulder. Or perhaps both nestled side by side in an old, battered Domke bag.

Every time I shoot with the SL I come back to my office with a smile on my face, sit down and comb the web, looking for another "perfect" SL body that's available at a reasonable price. A few days ago I came across one that looked interesting and contacted the dealer. The camera has the usual Leica "wear" profile in which the sharp edges start to lose their black paint. But it also just came back from Leica in Germany where the dealer/owner had asked for a full-on CLA (clean, lubricate, adjust) at about $370 US. The camera comes with a one year warranty from Leica.

I couldn't resist and decided that the purchase would be a great way to celebrate the continuation of the VSL blog. I'm sending each of you a partial invoice for the new camera in order to share the cost burden since I'm certain you'll love hearing about these camera in hundreds of posts yet to come.... check your mailboxes. Please send cash!

(For the more literal and less imaginative readers: I am not sending invoices. I am not asking anyone to pay for my latest acquisition. It was meant to be a joke).

I am still making plans for a jaunt out to Roswell, NM. I'm thinking somewhere around the 6th through the 11th. I'm waiting on hearing from several clients with pending projects before I finalize. If not that week then almost certainly the week after. Two Leica SLs, a bag of fun lenses and wads of cash crammed into every pocket. That's the way to have a fun ART vacation. Let's see if I remember how to have fun...

Oh, and someone will certainly ask, "Which of the Leica SL bodies has the best image quality?" Hmmmm. They are all so good that each of the cameras exceeds my ability to discern any differences in quality on my 5K monitor. But the images from the SL are marginally less "perfect" and so have more mojo. And you have to have the mojo.

An interesting take on the original SL by Kristian Dowling: https://www.youtube.com/watch?v=1deP6lY7OXk