Some thoughts about choosing lenses and making square images. In praise of the 65mm... 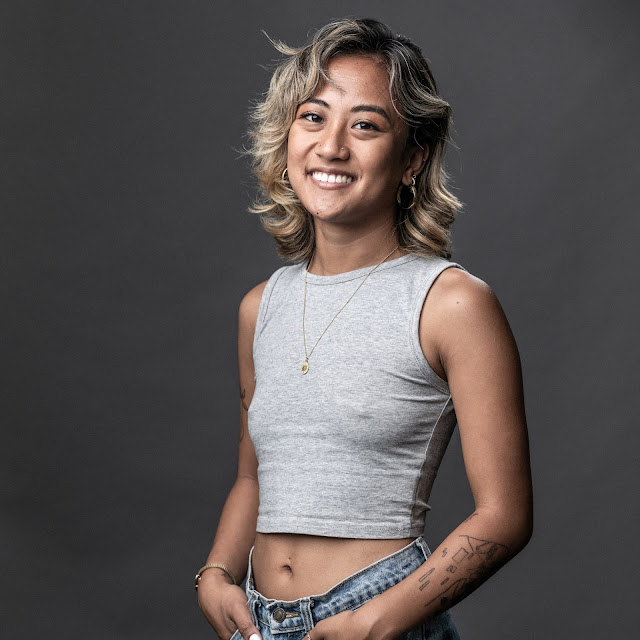 I've always been a bit "old school" about my lens choices for portrait work in a 35mm format. Most of my earlier portrait work in 35mm was done using 105mm to 135mm lenses and lately, when I go back and look at photographs from a certain period I find that faces sometimes look a bit too compressed; too flat. But when I think about how I photographed with medium format cameras, doing the same kind of work, I am aware that most were done using a 150mm lens in a 6x6 cm frame which is something like a 75 to 80mm equivalent re: field of view. I worked closer in with the 150mm in order to fill the frame than I would have with the longer lenses for 35mm.

When I started planning for my session with Catie I knew I wanted to work in a square format. I wanted to get back to the feel of the medium format square even if I was shooting with a smaller format camera. I played around with two or three other focal lengths but found the 135mm, 105mm and even the 85mm too constricting when using the camera with the 1:1 format. The final two lenses I considered were the Sigma 70mm Macro Art lens and the Sigma 65mm f2.8 lens. I liked the angle of view on both lenses but when testing I found the 70mm lens to be a bit too contrasty and analytic for the kind of portraiture I had in mind. The 65mm seemed to be the winner of the lens distillation process. It's wider, by a touch, than I would normally use but with the 31+ megapixels of resolution provided by the Leica SL2 in the square format there was always the potential of cropping the final image.

The 65mm, in conjunction with the cropped frame, turned out to be exactly what I wanted. I could get as close as five feet from Catie and not see too much obvious distortion of her facial geometry. Moving back to eight feet or so I could create a loose frame for a waist up shot.

One of the attributes of the 65mm is a very sharp center core. Even used wide open the lens has good definition and contrast. But it's nicely balanced and doesn't come across as a "harsh" lens. I stopped down and shot mostly at f3.5 and at that stop anything within the depth of field was detailed and clean; but not overly sharp.

Since I was working with continuous lighting and a fairly narrow depth of field manual focusing would have been time consuming and I probably would have lost a number of frames while Catie moved around. Instead I set the SL2 for S-AF and selected face/body detection mode. While some diss the L-mount systems as being bad at autofocusing my experience is that the system locks on quickly and precisely. My failure rate because of focus error was minimal. Maybe 1%, and I'd chalk that up to user error.

Depending on the subject matter and the intention of the portraits I would consider the 65 or 70mm lenses to be the sweet spot for studio portrait work with a square crop in a 35mm format camera. With nearly endless resolution any needed, minor cropping would be invisible as far as image quality is concerned. In  a small studio the 65 or 70mm gives me the opportunity to work a little closer or to get wider shots without having to open the door and step outside to get a frame I want... (that's an attempt at humor as I have never had to exit the studio to stand back far enough for the right composition...).

I liked working a bit closer to my subject because it made my mumbling attempts at communication a bit easier to understand.

When I first started considering the purchase of the Leica SL2 these kinds of studio portraits are exactly what I had in mind. The addition of the 65mm Sigma lens was like flicking on a switch; it made the whole camera and lens package feel perfectly right for my way of seeing.

The camera and lens match up well and there was none of the heavy battery drain that I experienced with older Sigma L lenses on the Leica cameras. The latest firmware is running on both camera and lens and I think the L alliance has gotten power management figured out.

The lens itself is a breath of fresh air in the L mount lens pantheon. Since the aperture is a sensible one (f2.0) Sigma was able to make a lens that's sized well; not gargantuan like the Sigma Art lenses with f1.4 apertures. I also like using the external aperture ring to make quick adjustments. Its all metal construction confers confidence.

Choosing just the right focal length lens is important but it's also important to remember that every lens brings with it its own look, its own way of rendering detail and contrast. You might have two different lenses of the same focal length but each can have much different ways of drawing. A macro lens, designed for high definition, usually brings with it higher contrast which can be detrimental to the intention of making a balanced looking portrait. A lens designed for more general photography might have a different set of optical compromises which make it a nicer solution for portraiture. Only by testing the lenses in the shooting circumstances in which you'll likely be using the lens will you really know which is a more successful choice of gear.

One other thing I've noticed about making portraits lately is that most of the raw files that come into Lightroom using the general Adobe color preset are far too saturated for my taste. Dropping saturation levels seems to open up the look of the files and provide a more natural look. The saturation and color look just right to me in the image above and that was after knocking down saturation by 12-15 steps.