I was both saddened and amused to watch a video wherein a self-described photographer goes on endlessly about the difficulties of large format photography. I wonder if he can use a clutch and a stick shift.... 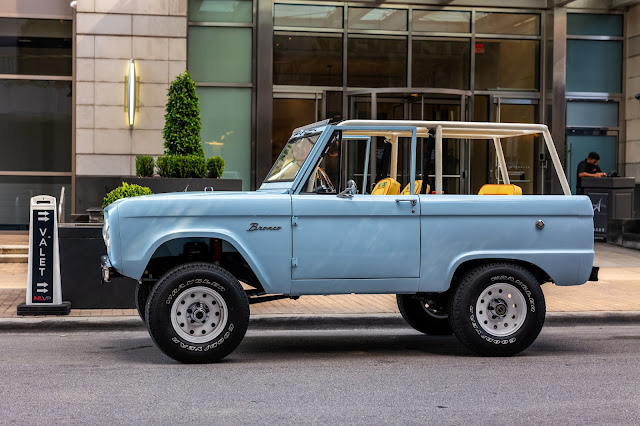 What? No automatic convertible top?!!!
How will we manage?
I won't mention the v-logger by name but a photo-oriented one recently decided that he would, for the first time, round up a 4x5 view camera, put a 150mm lens on it and learn to make large format photographs. To hear him tell his story (and this is a person with purported decades of photography experience) you'd think he was building his own neutron bomb or trying to put together a 64 slice CT Scanner without instructions. He makes working with large format all sound so incredibly difficult. I was appalled at how soft and weak photographers have become and, at the same time, tremendously amused because mastering a view camera seems infinitely easier to me than coming to grips, from a dead start, with the thousands of intricate bits of knowledge one needs to truly master PhotoShop.

Of course, from my perspective, he's doing it all wrong. He got one thing right; he's shooting black and white film, but he got everything else in the "Art" package dead wrong. He's shooting film and then sending it to a lab for processing, and to someone else for scanning. But all the magic, all the stuff that makes a difference between all the other formats and large format, happens in the interpretive stages of darkroom work. You gotta get your hands wet.

He insists he can barely focus his camera, even with the lens wide open (he should get a loupe) and he was surprised that having only two film holders (four frames of film) would be cramping his shooting style. He is using his learning difficulties in the moment as a crutch to rationalize switching to a Fuji MF digital camera and I certainly can't blame him for that since the Fujis are nearly as easy to actually shoot as point and shoot cameras. When you have an EVF, auto focus, and a Program mode and it's pretty hard to go wrong. You then only need two skills to have success with modern cameras; you need to know where to point the camera and when to trigger the shutter.

I learned large format as a teaching assistant at the University of Texas. We taught students in the studio courses using 8x10 cameras which came with 4x5 inch reducing backs. Students weren't likely to be able to afford 8x10 sheet film and we weren't about to stock in limitless supplies of 8x10 Polaroid test materials for them. But they could get by with the "smaller" 4x5 inch format....just barely. $$$

At the end of a semester, after working with all manner and size of cameras, I snagged an assignment from a magazine called, "Early American Life" published in Harrisburg, PA. The assignment was to spend 10 days with an art director/editor in tow going to out to photograph historic homes and plantations in Texas and Louisiana.

The requirements were that I use a 4x5 camera with transparency film and that I be able to light interiors with powerful, studio flash. I had the lights. I just didn't have my own camera. I bought a basic model from Calumet, along with an inexpensive 90mm wide angle and a 150mm f5.6 "normal" lens. At the last minute I borrowed a 240mm f5.6 lens from a friend who seemed flush with large format gear. I spent an evening in the darkroom loading all 28 two-sided film holders I owned with transparency film and stocked in six or seven 20 sheet boxes of Polaroid black and white test materials. I was already conversant with my light meter.

While view cameras demand a slower approach to photographing they are very much the same as all other cameras. You view your image on a rear screen. Sure, it's upside down and backwards but that's just takes a quick span of time getting used to. Most old pros got to the point where they were better at composing upside down because it was easier to see the graphic underpinnings of a composition. The scenes were more abstracted.

I brought along 140 sheets of film and that seems now like far too little film for a multi-day project. I also brought along a torture device called a "changing bag" which was made of layers of black cloth. You stuck film holders into it, inserted your hands through a set of sleeves, and were able to unload and reload sheet film without worrying about it being light struck. Just be sure to include a three part film box inside the changing bag so you have somewhere to secure your spent film.

The very last assignment I did on 4x5 inch sheet film was a profile of the town of Manor, Texas and well over 60% of the photographs I took were environmental portraits taken quickly.

The idea that the camera can be such a tremendous roadblock seems bizarre to me today. I can't  imagine what my mentors would  have to say about the concept that a 4x5 view camera might be more complex to operate than learning to play the piano.

I do agree that learning to work with a view camera in 2021 is just silly. Especially for a flighty dilettante.

Best that the V-Logger class stick with stuff that is automated. It's less embarrassing for everyone. If you aren't willing to put in the time and effort you're just wasting your own money and everyone else's time. That's what happens when you give up too quick. Or choose the wrong project to begin with.

I give view camera lessons for $10,000 per day. Upfront deposit required. Step right up.