I used to spend a lot of time in San Antonio. I saw a lot of fun stuff. 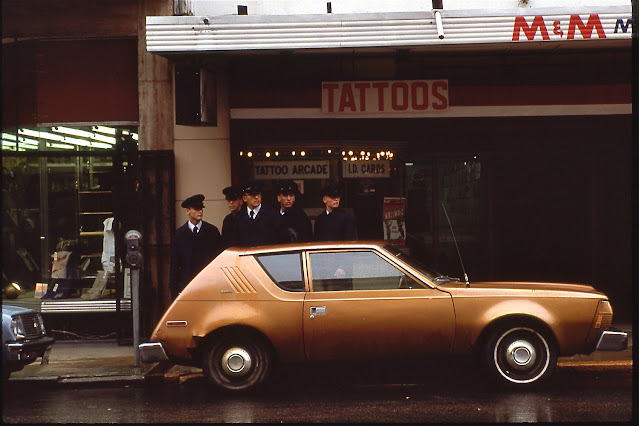 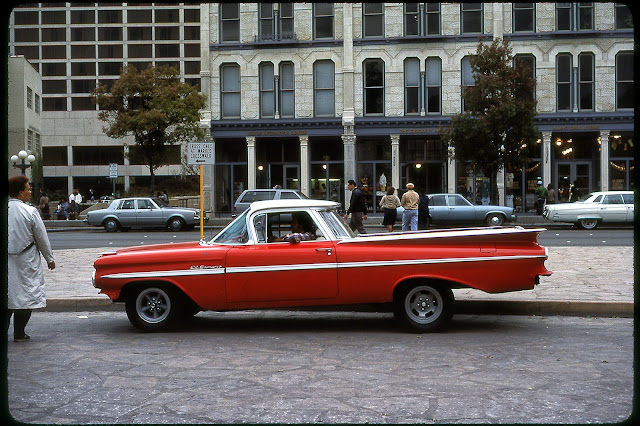 The two images above are scans from color slides. Slides I took back the late 1970's and early 1980's.
I've lived in Austin since 1974 but at the end of that decade and for a few years beyond that I used to get in my car and drive to San Antonio to take photographs. I guess those were my early days as a "street photographer." My friends used to ask me what the attraction to San Antonio in that era really was and I had, at the time, a ready answer.
San Antonio, as a city was much more diverse than Austin. It was also a city with lots of foot traffic downtown, a thirst for tourism, and wonderful old buildings and shops that survived from a time when everything was slower and change happened at a glacial pace. People caught buses, they clustered around street musicians, and a shy photographer could count on a big, boisterous crowd in the outside space of the Mercado on the weekends. Just bring a longer lens and you could "people watch" all day long.
The restaurants had roaming mariachis, the square had conjunto bands and the prices for food and alcohol were affordable. Even by wannabe photographers fresh out of college. Two things I really enjoyed in the downtown space were the giant parades (especially during the week of Fiesta) and the assortment of older cars; some well maintained and some on life support.
I found these two when I was going through some files and thought I'd share them here. I remember the Fall day when I shot these. I came down and stopped by my parents' house and then caught a bus into downtown. That way I didn't have to pay for parking. I shot all day long; mostly with Kodachrome 64 film, and I got a lot of good shots. But no where near the number of keepers I'd get walking through the parades. If you could wangle a press pass then you were golden and no one ever objected to being photographed. It was such a different time.
I usually topped off a trip down to SA with a dinner at Mi Tierra Café and Bakery. A very traditional Tex-Mex restaurant which thrives even now. It's quintessential Tex Mex food and now there are additional attractions such as a painting of Bill Clinton (before his vegan diet) and a giant altar for the music legend, Selena.
The restaurant operates 24 hours a day and seven days a week. And it's amazing who you might run into there at all hours.
But the cars! Some days it's like being on a movie set that spans the decades from the 1950's to the current century. One time I could swear I even saw my family's old Chevy Biscayne, long since traded in on something else, trundling down North Main St. I could swear that little dent in the back left fender was there almost like my signature on the car. And that would have been over a decade since any of us owned it.
San Antonio is growing up quickly. The high tech people have discovered it. And the transplants from California. If want to live in Texas and you can't afford Austin then San Antonio is your next best bet. Just remember, like is too short to live in Dallas. 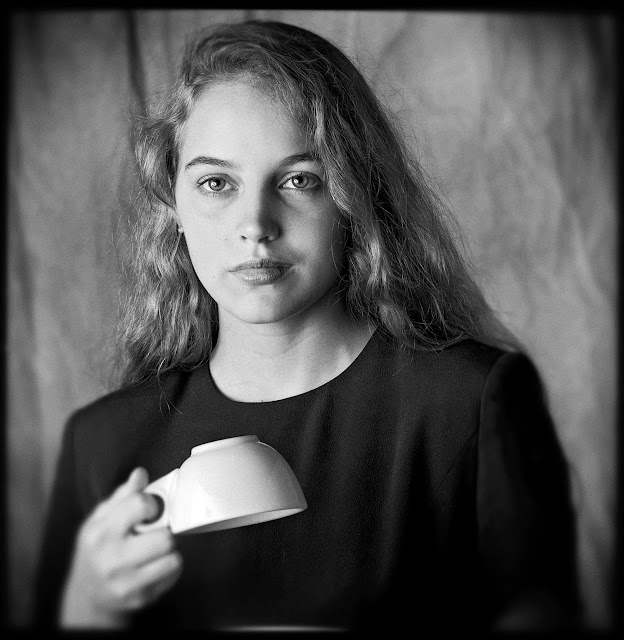 Lou. With inverted coffee cup.
I had some questions about swimming performance and cardiology over the weekend and I decided to go to an expert to get some answers. I had a nice phone conversation with Dr. Caldwell Esselstyn who is a fairly well known expert on heart matters and exercise (he was a gold medal Olympian, after all...) who has had a long tenure at the Cleveland Clinic. We discussed many aspects of diet as they relate to cardiac health and declining performance. I got many great pointers for vastly improving my diet but the thing that was most interesting to me, in the moment, was information he gave me about the role of nitric oxide in coronary artery health and the ability of arteries to dilate effectively.
Apparently the endothelial tissue in arteries makes it's own nitric oxide but, like most good things, it gets progressively reduced by aging. Nasty stuff this aging. But the good news is that by aggressively adding foods rich in nitrates to one's diet the body is quite capable of converting the nitrates to nitric oxide. The advantages are healthier blood flow, less damage to blood vessels from the aches and pains of aging, and because of the increased ability to dilate well, and stably, better endurance for exercise....and life.
The plant with the most nitrates are generally the leafy greens like kale, arugula, Brussel sprouts, and the like. One powerful source is found in beets. Not cooked beets as the cooking changes the bioavailability but in unaltered beet juice. I immediately went to the local Whole Foods to buy more kale and beet juice. The beet juice I like best has added ginger and turmeric which are also very good antioxidants. I've been on the recommended amount of beet juice since yesterday morning and while I'm sure this is somewhat from the placebo effect, but my workout this morning felt a lot less arduous that the same basic workouts I did in the pool through last week.
But what does this have to do with the coffee cup? In the course of our conversation Dr. Esselstyn suggested that coffee isn't that great for you and that by eliminating the caffeine I might have less overall load on my heart while exercising and, well, doing everything else. I thought I should give that a try as well.
I cut out the caffeine on Saturday and after the headaches and lethargy I went through on Sunday I felt better yesterday and back to normal today. I'm drinking a "no buzz" blend of decaf coffee because having coffee with people is part of the structure of my existence. But it's the people in front of me that are important, not necessarily the blend in my cup.
So, today's report is: Beet juice is an acquired taste. Beet juice turns body waste pink. I swam equally fast today but with less effort. My resting pulse is about two beats per minute slower. I want to take a nap.
That's it.
Posted by Kirk Tuck, Photographer/Writer at 16:16 6 comments:

Let's all give Ricoh a rousing round of applause for reinventing a camera that a different company got just right about 43 years ago. 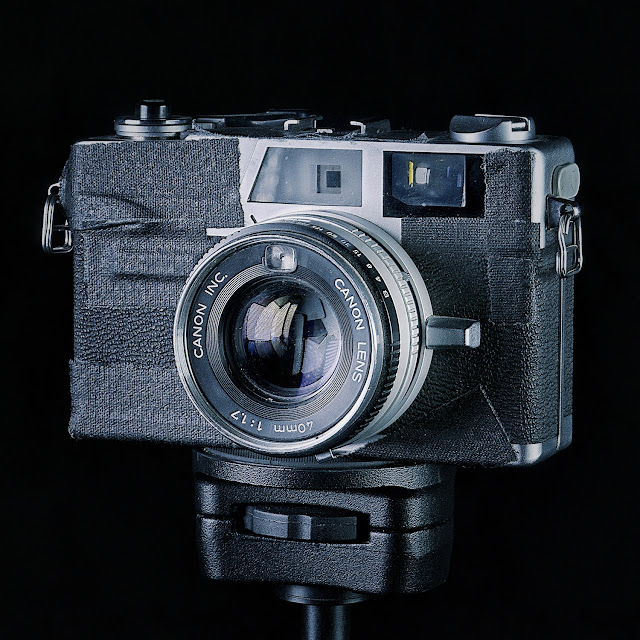 Lots of people seem pretty excited about the launch of the Ricoh GRIIIx. It's a mostly plastic camera with a new, 7 element, 5 group, 26mm lens on the front. Since the lens is mounted on a 24 megapixel, APS-C sensor body it's effective focal length (when compared to a full 35mm frame camera) is that of a 40mm. The fastest stop is f2.8 and the lens stops all the way down to f16.
But what we have here is basically a small, lightweight, plastic version of something like the Leica TL2 but with no option to change lenses. To my eye the Ricoh GRIIIx is a stripped down point and shoot camera without much to recommend it beyond whatever subjective color science mojo Ricoh adds, along with the ability to toss it into a convenient pocket without damaging either your trousers or the camera.
Don't get me wrong. It's nice to have options like this but at the same time it's hardly the groundbreaking introduction that some seem to think. There's no integrated finder. All composing, focusing, and menu diddling has to occur on the moderately sized rear screen. You can buy a small optical finder for the hot shoe but it's an added cost and another thing to strip off the camera before you slide it into the pocket of your Armani jeans.
The final negative point I'll make about the GRIIIx is that the tiny battery it uses gets (according to Ricoh specs...) about 200 actuations. Hmmmm..... Hardly enough for a short afternoon of street shooting for me.
When I read about product introductions like this one I always wonder just why the heck all these advanced camera makers can't come up with a digital version of a great, fixed lens, street shooting miracle like Canon did in the early 1970's with their Canonet QL17mk3.
Like the Ricoh-cam it has a very, very good 40mm lens. But a real 40mm lens, not the 26mm lens as on the GRIIIx. Why the difference? Because the Canonet was/is a full frame camera. And to add insult to injury Canon was able to adorn their flagship compact camera (43+ years ago) with a fully usable f1.7 lens aperture instead of the slower f2.8.
While the ancient Canonet obviously didn't have a rear LCD screen for all the functions needed for photography it one-upped the lone rear screen by providing a very good and very bright coincident rangefinder that also allowed one to view and compose through an optical, glass viewfinder. Oh, and the rangefinder corrected for parallax!
There are batteries in both but the Canonet will still take photos after the battery is long depleted and dead. Why? Mechanical shutter. Mine is still working well after some 40 years of use and abuse. Memorize a small handful of typical exposure settings and you are good to go.
While I'm sure both cameras feature leaf shutters and would allow for high speed flash the Canonet had the advantage of an accessory speed light that linked to the distance and aperture settings of the ancient camera and gave very, very accurate guide number guided flash. Probably better in exposure accuracy than most current $600 TTL flashes. Why? Because the flash shifted to smaller and smaller f-stops as you focused closer. Your duty was to correctly input the film speed. Pretty easy. But nothing like it is available, I guess, in 2021.
The Canonet is the camera that always makes me a bit sad because it was so well built and so perfectly suited to much of the market in the day. That we can't have a simple, indestructible, affordable digital counterpart after so much "technical advancement" is mind-boggling. The current answer being underwhelming cameras like the GRIIIx or insanely expensive and much less capable cameras like the Zeiss ZX1.
My brand new purchase price for the Canonet back in 1976 was $109. I understand that inflation would probably make a new version something like $1,000. But I'd gladly pay for a real rangefinder camera with a full frame sensor, a great lens and an indestructible demeanor over the general collection of crappy, compromised cameras we're presented with today. Wouldn't you?
And, again, I'm sure for the Ricoh is just fine and I'm probably not the target market since I don't value the ability to nestle/ cram a camera next to the car keys in my pocket as an absolute and top priority for camera ownership. I'm just saying we should stop settling and expect better. After all, a luxe, used Leica TL2 can be had for around $1,200 and will work with any L series lens. Put the Sigma 30mm f1.4 on the front and you've got, at least, a nicely structured object with a lot more flexibility. And, without a lens, you can cram it into your Levis with little issue.
Just thought I'd share my opinion on a new product. And an older one.
Posted by Kirk Tuck, Photographer/Writer at 15:54 17 comments: