The first soggy, chilly outing with the Sigma Contemporary 18-50mm f2.8 Lens. Not perfect. Not bad, but not perfect. 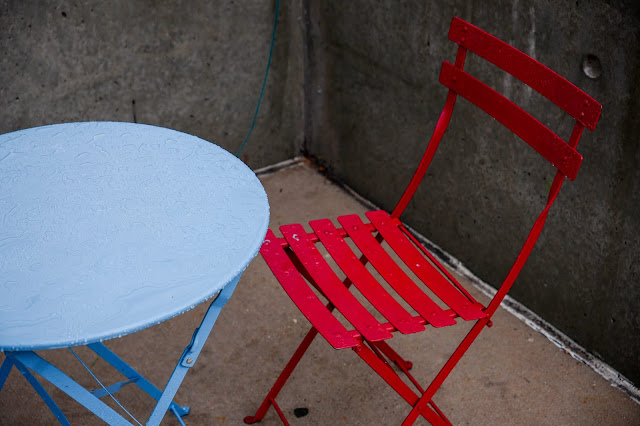 the color and contrast are great.
I was excited to order this particular lens. It's a wide-to-moderate tele zoom lens with a fast aperture (f2.8) that doesn't change with varying focal lengths. It's relatively inexpensive. It covers the APS-C format and I was very happy that it came in both an L mount and E mount. I wanted a zoom with this speed and focal length to use on my Leica CL. The Leica version is around the same range of angles of view but it has a slower and variable variable aperture and while I'm sure it's keenly sharp and possesses some magical Leica pixie dust its price, given a quick feature-to-feature comparison with the Sigma, is a ball buster. The Leica comes in at around $2,000 while the Sigma is an easier to manage $550. As an all-arounder for the second tier system in my studio I think we're fine with it.
I took the Sigma lens out today, on the CL, and walked around the familiar downtown path. I was hampered by a continuous rain and some colder than we're used to temperatures. Very few people were downtown and outside in the rain today. But that's fine. I photographed what I could.
The new lens is not without a few flaws. I wish the focusing ring and the zoom ring positions were switched. I'm used to the focusing ring being at the front of the lens and the zoom ring being nearer the camera body. It's going to take some time to get used to. I also think the zoom ring is set up opposite from most other L mount lenses. On this lens the zoom ring rotates counterclockwise to zoom from wide to tight. My other lenses are reversed.
While the lens is sparky and contrasty when shot wide open it seems to resolve less detail when used at maximum aperture than another lens that I've been using a lot on the camera; that's the Panasonic 20-60mm lens. Once I stop down the Sigma 18/50 to f3.5 everything sharpens right up just fine. Likewise, the lens tends to vignette a lot when used wide open. You'll either have to fix the corner darkening in post or choose a smaller f-stop to prevent vignetting... and that plays against the total usefulness of the fast maximum aperture.
The build quality is a step or two below the Sigma Art lenses I've been using but is on par with others in the Contemporary Series, like the 30mm f1.4, the 16mm f1.4 and the 56mm f1.4. But it doesn't have the same tight and dense feel one gets when handling native Leica lenses for the CL.
I'll give you my opinion right now: The color out of the lens (with the Leica CL) is perfect. Nice and saturated with very good overall contrast. From f3.5 on down to f8.0 there's ample detail and resolution. The handling will take getting used to. The lens isn't built like a Leica or Sigma Art lens but the counterpoint is that this lens is light and easy to carry around all day without much effort. It's a trade off.
Would I buy it again? Yep. It'll make a nice everyday carry lens for the smaller CL system. This lens and a pocket full of batteries is just what the photo doctor ordered for non-stop street shooting, found object shooting, artsy photos and much more. 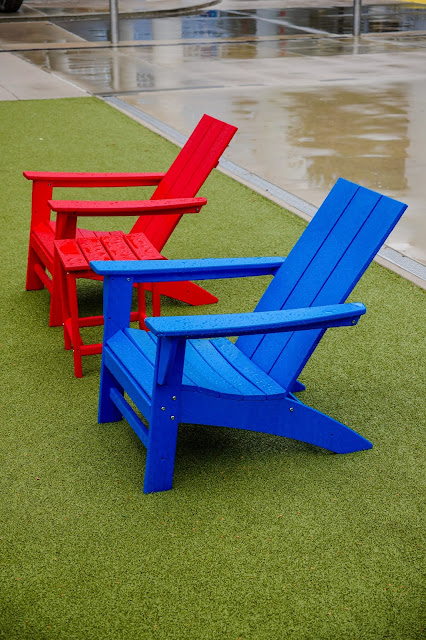 check out the vignetting in the bottom corners.
I double checked to make sure I had the hood on correctly, and no, I
didn't have any filters on the lens. 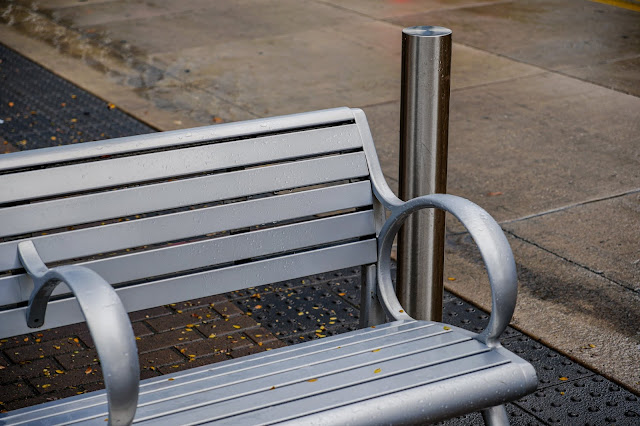 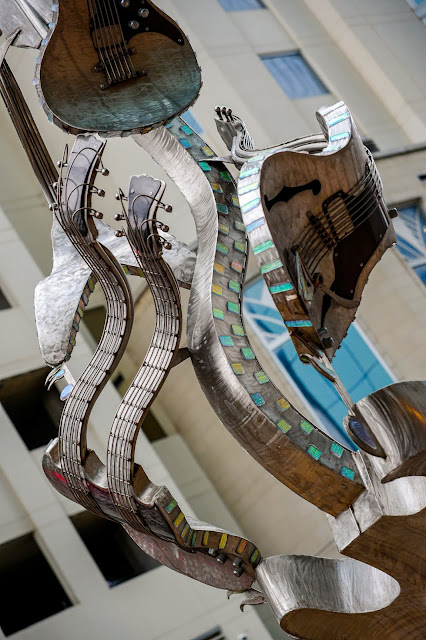 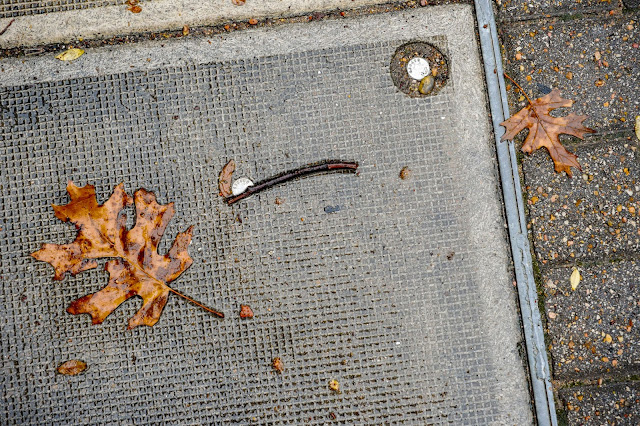 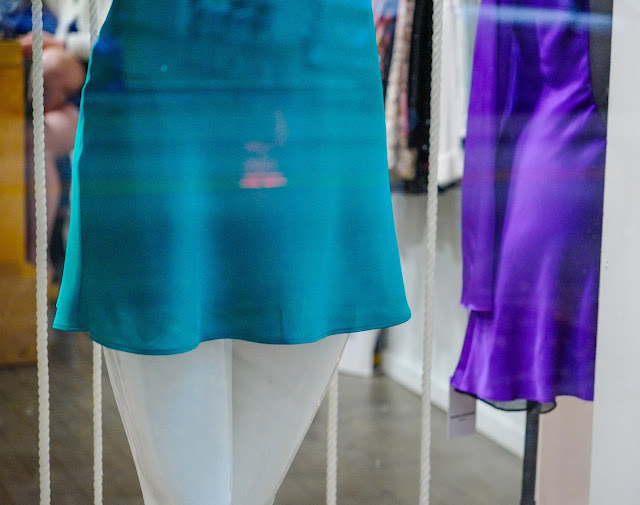 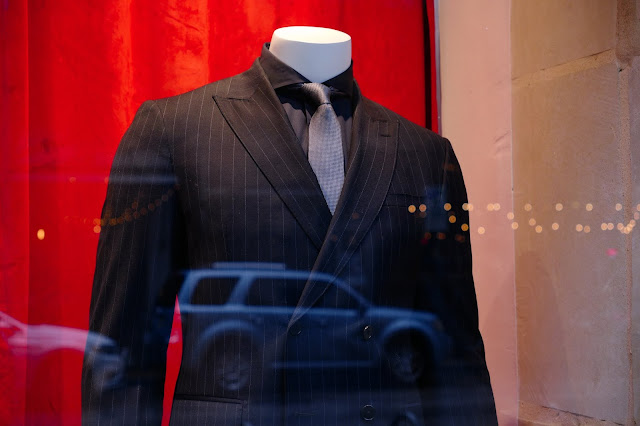 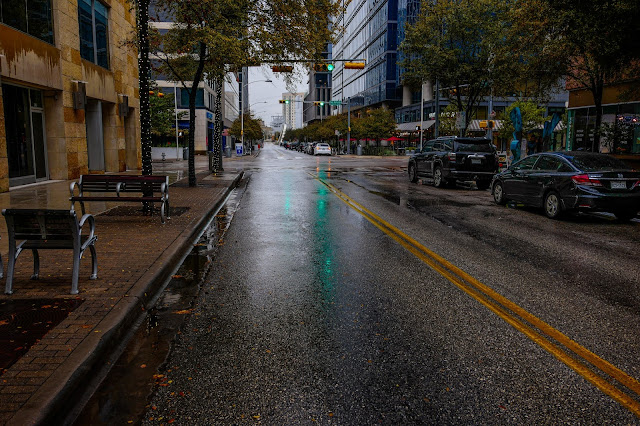 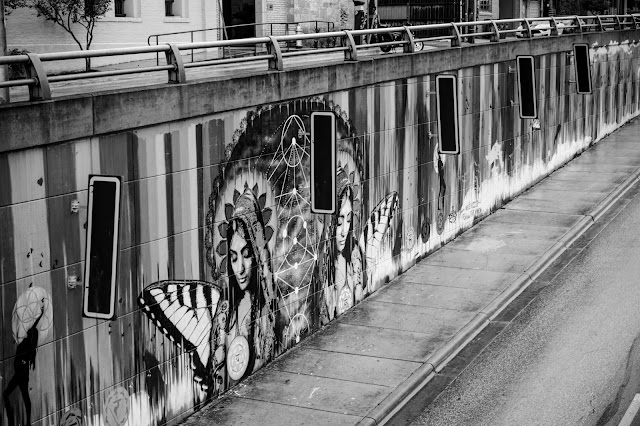 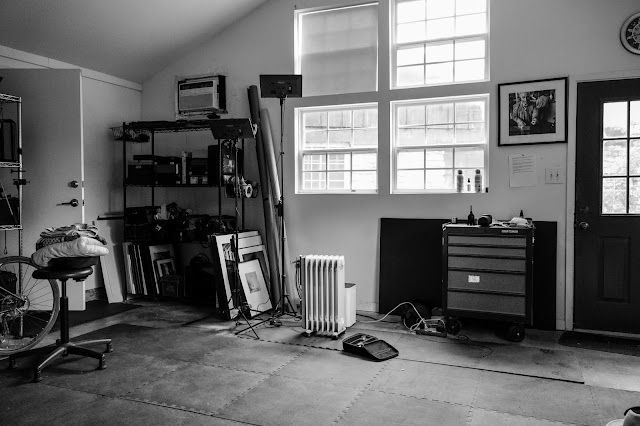 The lens at its widest zoom setting of 18mm. 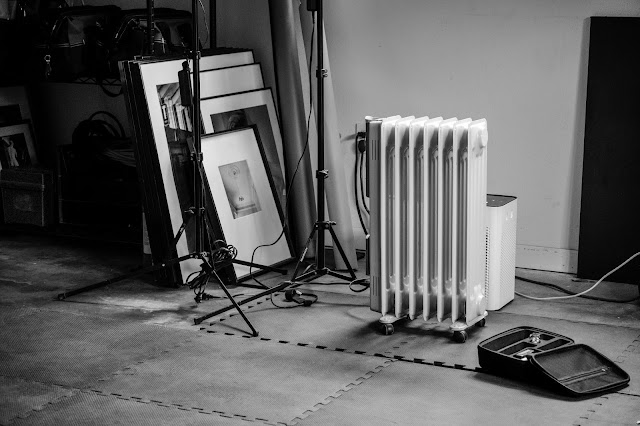 Same camera position but with the zoom at the longest setting of 50mm. 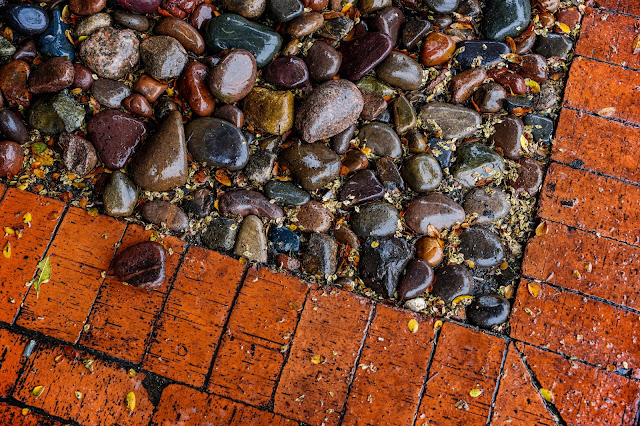 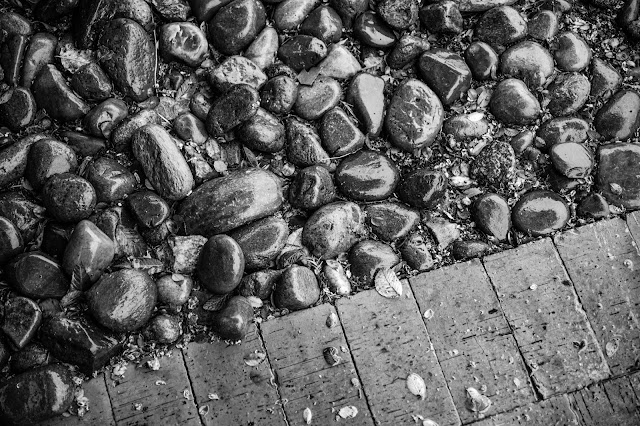 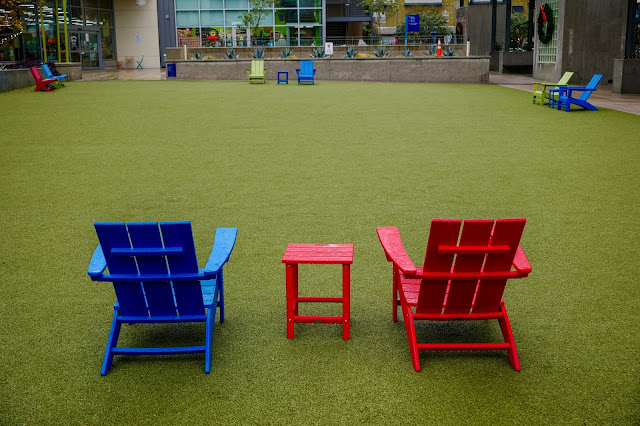 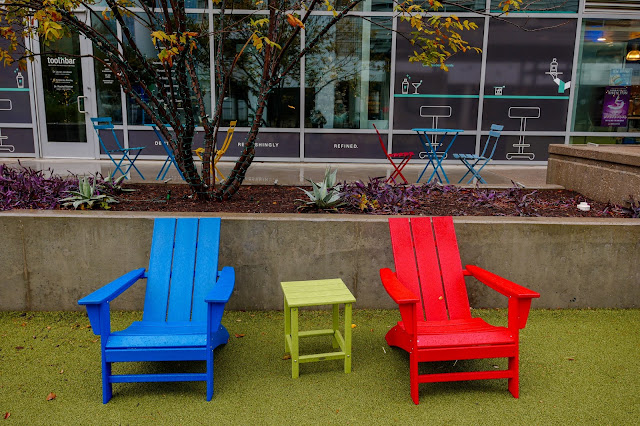 Corners corrected for vignetting in PhotoShop. 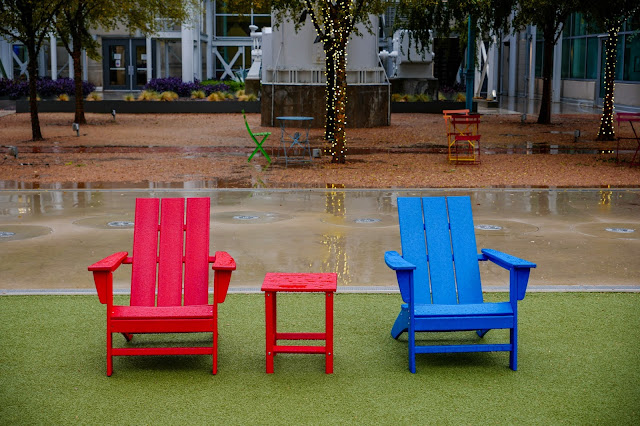 Corners left uncorrected.
The interesting thing to me about the vignetting is that these files are out-of-camera Jpegs and the camera is reading the lens profile so these images should be corrected with in-camera processing. It's entirely possible that the Leica will need to have a new firmware update to properly provide an in-camera correction.
Stuff like that seems to happen all the time now in our interconnected universe.
Bingeing on Netflix and Amazon Prime movies this weekend. Watched Cary Grant and Ingrid Bergman in "Indiscreet"  two nights ago and loved it. In the cue now: "Roman Holiday" and then "Funny Face"; both featuring Audrey Hepburn. And what lazy holiday weekend would be complete without plowing through Fellini's,  "La Dolce Vita" --- subtitled. Never dubbed. Never.
Also liked, "The Holiday", with Kate Winslet. Saving "Love Actually" for closer to Christmas. It's a perennial favorite. And if we feel quite silly we'll watch Chevy Chase in "National Lampoon's: Christmas Vacation." Always love the scenes with Cousin Eddie. Just hilarious.
That's all I've got for now.

After a chaotic journey through FedEx my Sigma lens finally and mysteriously arrived. 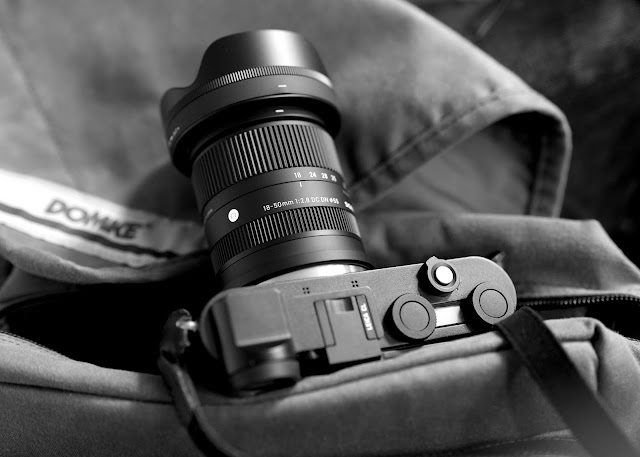 I finally ordered a Sigma Contemporary 18-50mm f2.8 lens for my newish Leica CL on Wednesday, Nov. 24th. I got confirmation almost immediately that my ordered had been received and the merchant sent along information stating that the likely delivery date would be December 1st, via Federal Express. The next day I got an e-mail update from them showing a revised delivery date of Sunday, Nov. 28th. "Nice surprise." I thought.

On Thursday I checked in on the delivery information directly, at FedEx, just to be sure we were really scheduled for a Sunday delivery. But on their site it showed the delivery as scheduled for between 10 a.m. and 3 p.m. on Friday the 23rd. Wow. The timeframe kept shrinking! But then, in the middle of Friday afternoon I got a new note from FedEx telling me they could no longer find my tracking number. It has ceased to exist.

I called their 1-800 service number and got a pleasant operator who assured me that the drop out of information was due to a system wide update and she assured me that the delivery would occur on Sunday the 28th.  Until I got a new message this morning; Saturday the 27th, telling me that the lens was on a truck for home delivery today. I didn't know who to believe at this point so I grabbed a clean towel and my swim bag and headed out into the driving rain and chilly wind to make my way to the pool for the 8 a.m. swim practice.

It was in the mid forties when I got to the pool (which is outside) and the rain was slanting down, driven by a stiff breeze. I changed into my swim gear and walked through the cold rain the 100 yards from the locker rooms to the pool deck. Thankfully, there was steam coming off the water and the water temperature was right where it should be at 80° Fahrenheit. I hoped in and started the warm-up.

Swim practice was fun and hard. We swam good yards and on the main set we established short intervals and a fast pace. It was an hour of pleasant penance for those extra chocolate, bourbon pecan bars I enjoyed. I think I have a few more workouts to get through to arrive back at homeostasis....

I was enjoying a cup of coffee at home around 10 a.m. when there was a knock at the front door. I opened it and greeted the guy from FedEx who handed me a nicely packed cardboard box with my new lens in it. I am still perplexed by the chaotic scheduling and re-scheduling by FedEx but essentially just happy to have my box (and my new lens) half a week sooner than B&H initially promised.

On to the lens. It's incredibly cute. Small and light and the perfect match for the Leica CL camera. I've only shot a few frames around the studio to make sure it's working as it should but I anticipate getting out this afternoon, if the rain stops, and shooting some more critical photographs. It's pretty wonderful to have a small, lightweight zoom lens for the format, complete with a fast, constant aperture, at a price that's reasonable and digestible.

Of all the stuff I've had delivered from a big store this year the Sigma 18-50mm wins the prize for best packaged. Wrapped in bubble wrap and then embedded in more bubble wrap in a large and all encompassing box. No nicked or crushed box corners. No visible scars of handling trauma. Nice. But few stores can match the care that the Leica Store Miami lavishes on their shipping process. Their boxes and internal packing are flawless. I might buy something else from them just to marvel again at their packing...

The camera and lens together seem like a natural pairing. Like brie cheese and red wine. Coffee and a scone.

Speaking of coffee, I think I'll go and find some more...

Are you expecting self-Santa to get you any fun photo gear for the holidays? Always curious....