TTArtisan 21mm f1.4. The one afternoon review. Having fun downtown. 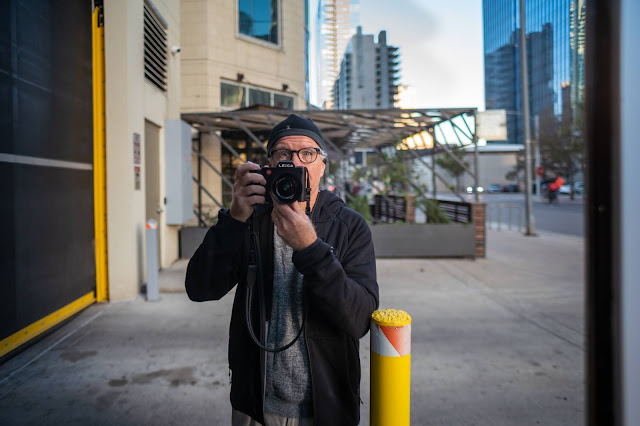 I had a blast today. I photographed my former assistant and good friend, Anne, here in the studio, in the early afternoon. She's terrific. She abandoned photography to go into nursing, got her master's degree and is now out to save the world. I photographed her with the Leica SL2 and that absolutely adorable Sigma 90mm f2.8 i-Series lens. Everything worked perfectly together.

After Anne left I found a package left by the front door. It was the lens I'd ordered a few days ago from B&H Photo. The TTArtisans 21mm f1.4 lens in an L mount configuration. I had a few hours before sunset so I put the lens on a favorite SL body, put on the wide, cool hood and drove downtown to see the holiday market at Republic Square. Live music, lots of food and a wide variety of vendors. A nice venue at which to test a new lens. 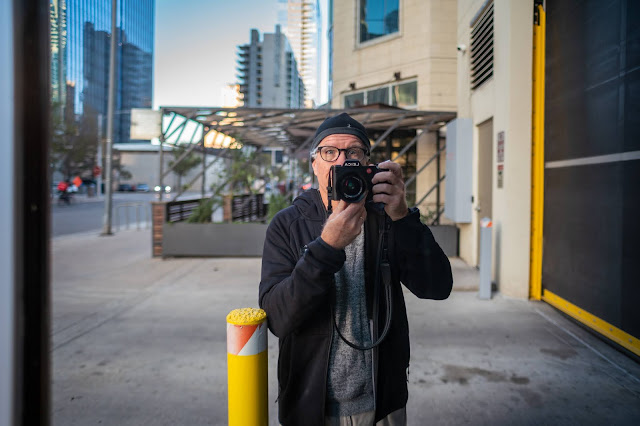 the artist unreversed.
The 21mm f1.4 from TTArtisan is not very expensive. It's widely available at just under $240. At that price I'm think most people would not expect much but I think many of these images rival the output from lenses I've owned that cost a lot more. Tons more. Most of the photography I did today didn't really push the boundaries because I was more interested in shooting the lens the way I'd use it in real life instead of trying to trip it up at f1.4. But everything I shot at f4.0, f5.6 and f8.0 was really very nice. There's some distortion that I did not correct but it's certainly no worse than what you'll find with many name brand lenses before the computer generated corrections kick in.
I won't say more about this small, light, well made and fun to shoot lens until I've had the chance to use it for a couple of weeks but I will say how much I enjoyed being outside this afternoon with nothing more pressing than walking through the park and photographing with a new lens.
I ran into Ian and Mariana who were hard at work selling their incredible book about Mexican cuisine. It's destined to be a classic of the genre and I'll be reviewing it sometime next week. Ian is one of my favorite food photographers and his wife, Mariana, is an incredibly talented chef and food stylist. What a great combination. The book is a jaw dropping jewel...and everyone I've gifted a copy to has been very impressed.
I also ran into my favorite, Austin-based, fine art painter, Catie Lewis. You probably saw the portraits I did of Catie earlier this year in the studio. Her work is wonderful and she's so bright for such a young artist. She had a booth and was showing  and selling her art as well. It was so nice to catch up!
On the way back to my car I ran into one of Austin's legends, Patricia Bauer-Slate. She's owned a number of top notch restaurants. She owned a bakery that was so good it made food reviewers at the New York Times swoon. And fly to Texas to taste her amazing creations. We'd lost touch for a while because of the pandemic but we were able to reconnect and we're planning a dinner right after the 25th. I spent many, many mornings sitting on one of the benches outside her bakery enjoying some of the finest cups of coffee ever produced and savoring my favorite pastries, done perfectly in the traditional fashion. The editors of of Larousse would be so proud... I'm happy to be in contact with a legendary chef once again!!! 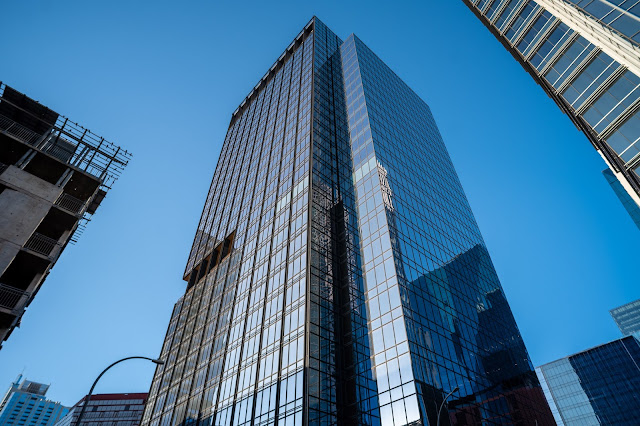 I'm always a bit surprised when the end of the year sneaks up on me so quickly. I feel like we've barely gotten started and all of a sudden another year is largely in the rearview mirrors. How did that happen? 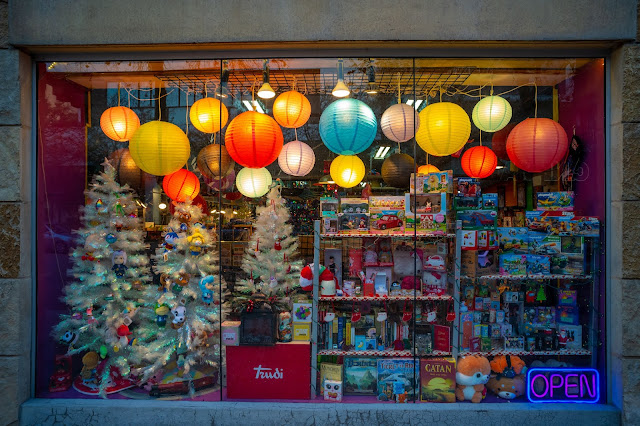 Yeah. Okay. You can see the barrel distortion but it's pretty easy to correct.
Create a profile once and you're done. 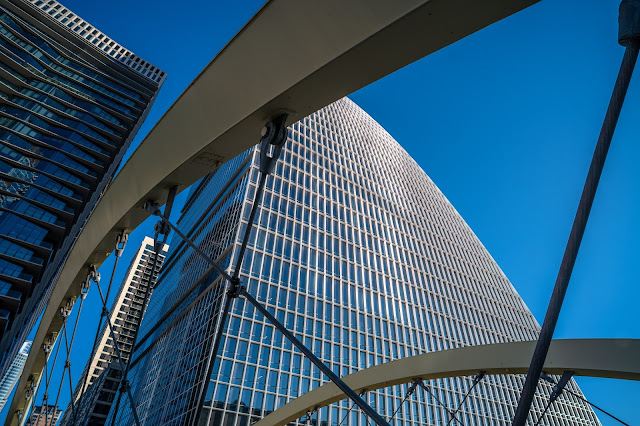 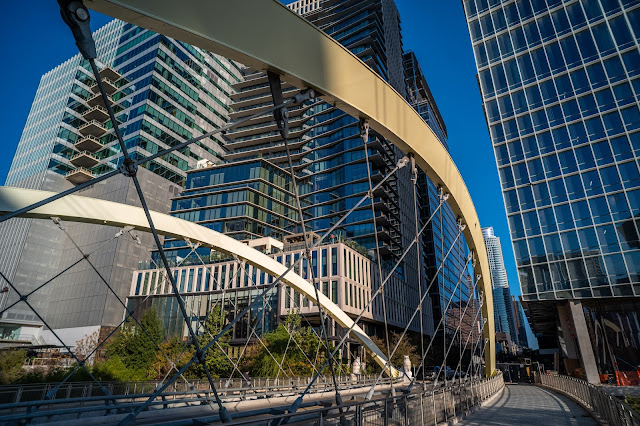 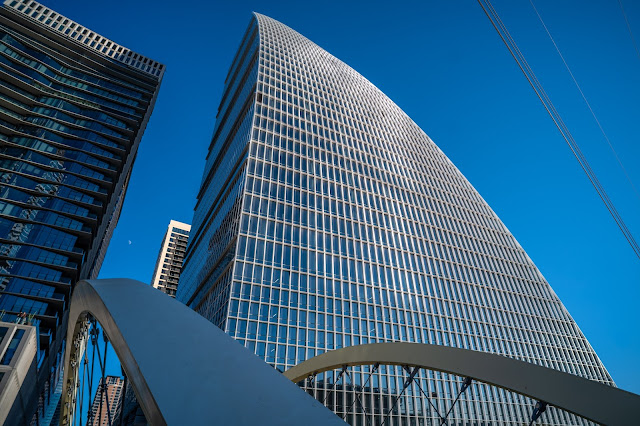 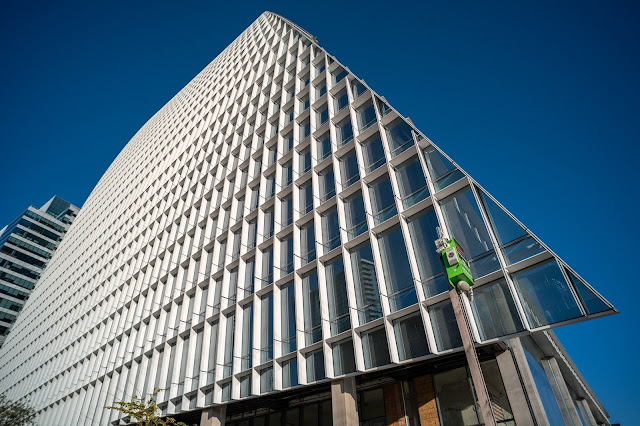 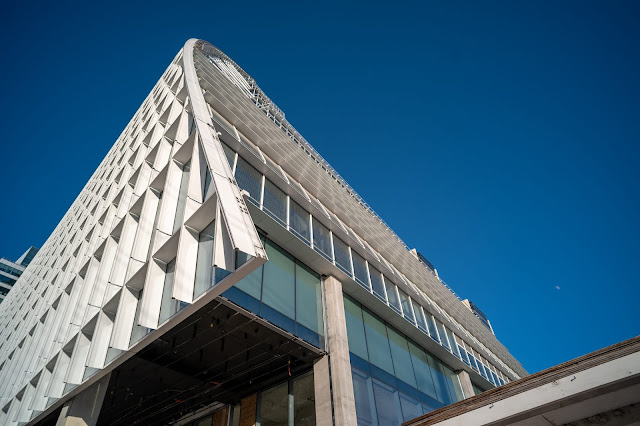 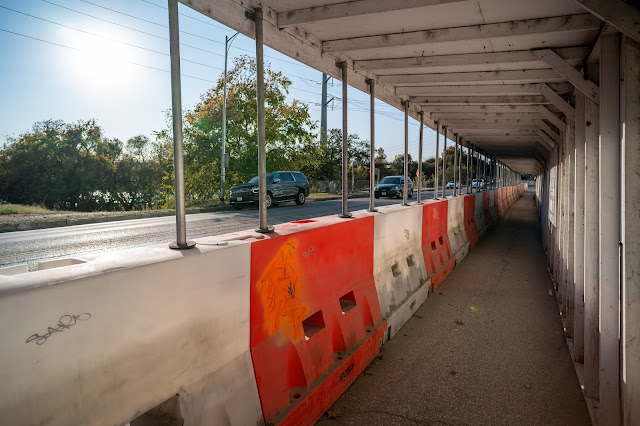 Hey! Look! Direct sun in the frame and no problems with veiling flare or lowered contrast.
Is this really from a $240 lens? Hmmmm. 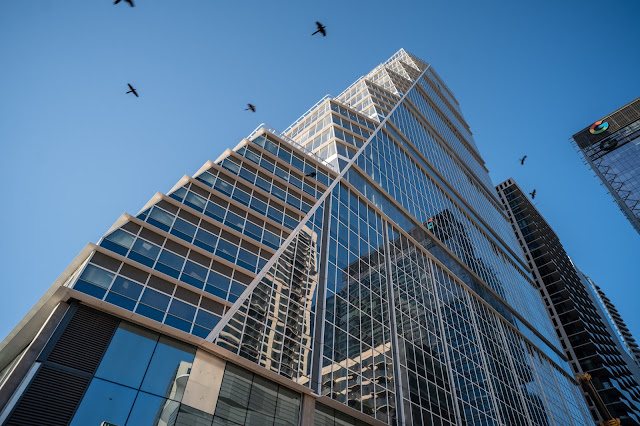 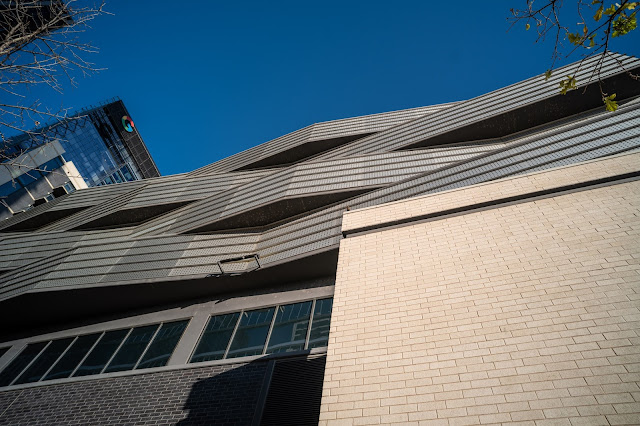 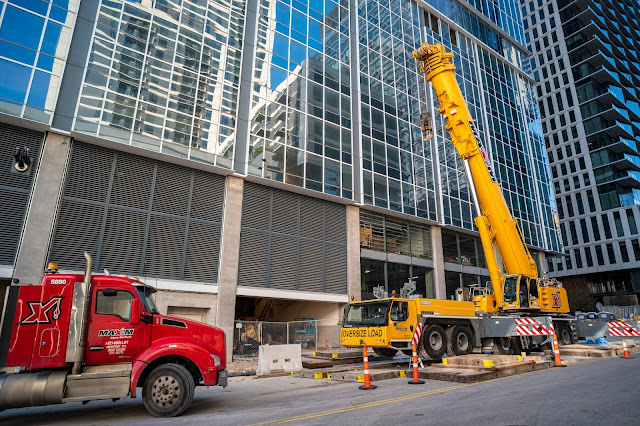 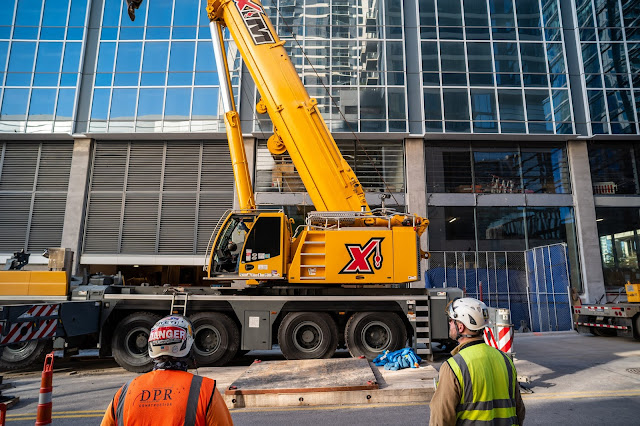 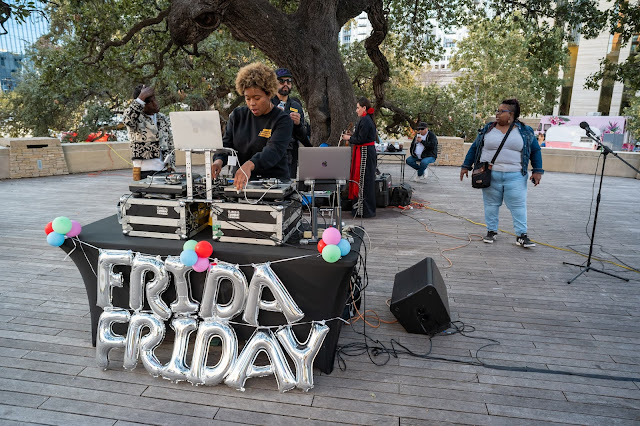 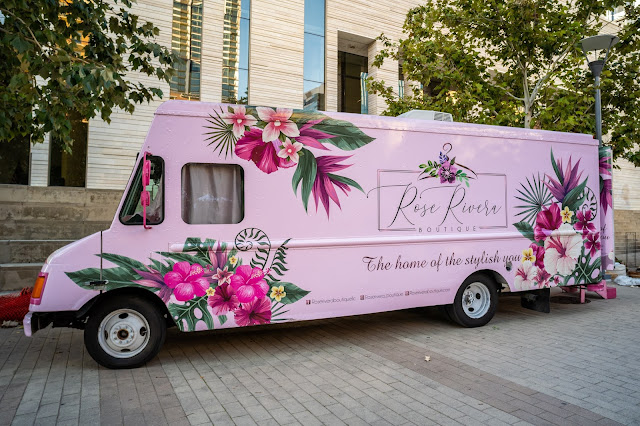 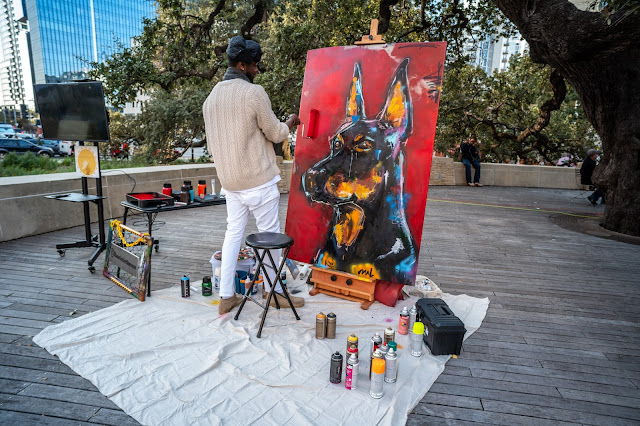 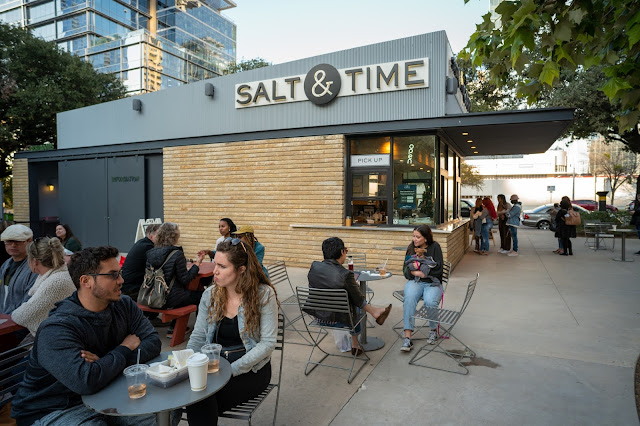 My newest downtown hang out.
Until the winter weather hits hard. 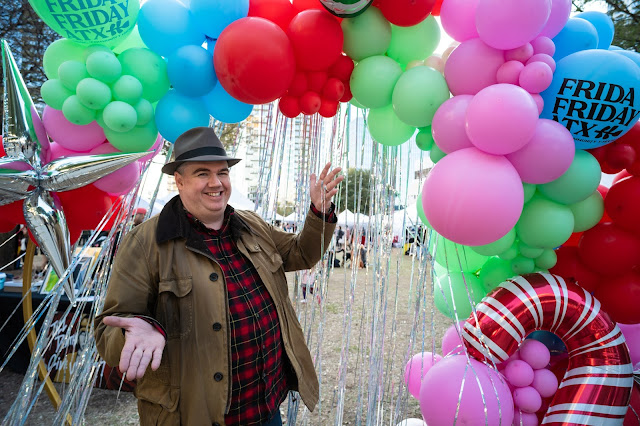 this is my friend, Ian McEnroe. He's an incredible food photographer.
He's married to a great chef who is a bonafide expert on
Mexican cuisine. He helps test recipes.
Lucky guy!!! 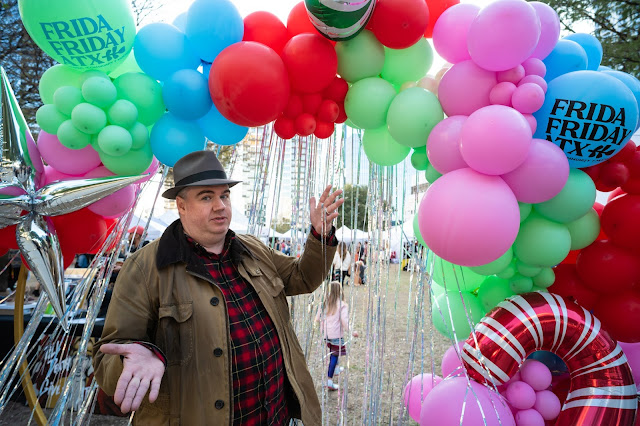 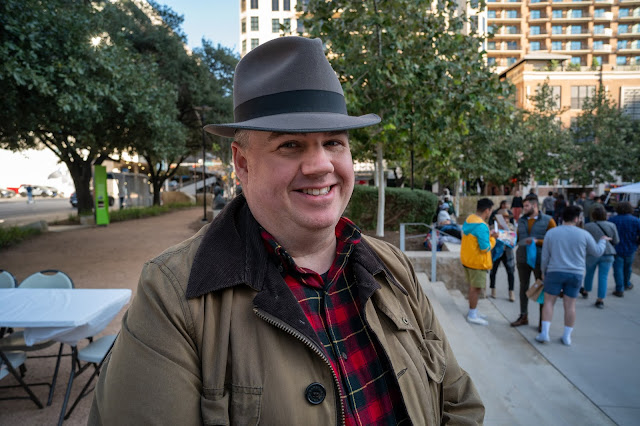 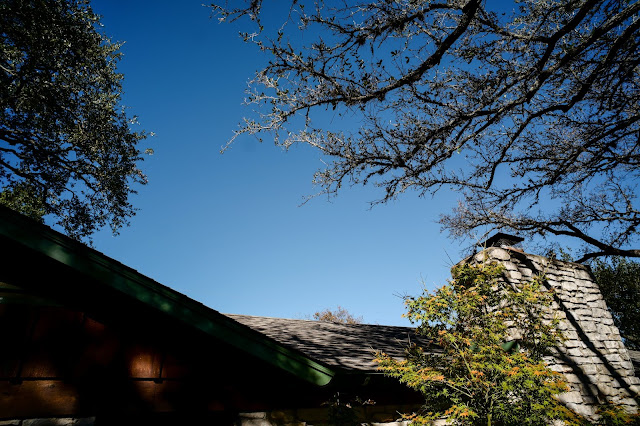 This is the first image I made with the 21mm lens.
It's the view from the front door of my office.
That's the chimney of my house in the lower right corner.
The lens, at f7.1 seems pretty sharp just about everywhere.
More later....
Posted by Kirk Tuck, Photographer/Writer at 19:07 3 comments:

A Follow On to our Discussion of Photographing People in the Street. And Irrational Fear. 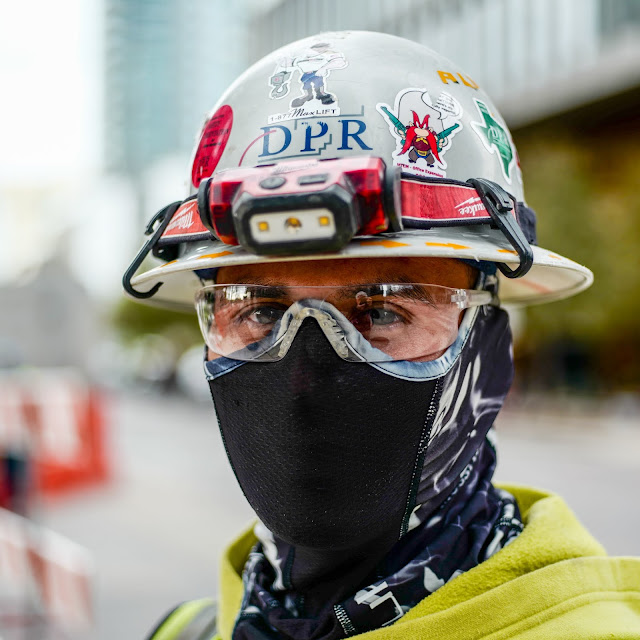 It's also a chance to share another nice example of how the Leica 50mm Summicron R renders images when shot near wide open. I believe this was taken at f2.0, the widest aperture on the lens.

The idea that people on the street are acutely aware of, and hostile to, your every movement in public when you aim a camera at them is misguided. While I often hear or read that someone was treated with hostility while pointing a camera at a stranger in "real life" I find that reaction is pretty rare. (copy edited on Sunday evening = in reference/deference to Mike R.'s comment below).

Most people are oblivious to much of what goes on around them. And I'm talking about what goes on within ten or twenty feet of a typical person on the street. They generally have much more important things on their mind than unraveling the intentions of a slow moving photographer who is far outside their area of operation.

On the other hand, if you walk right up to a person on the street or on a job, ask him about his job, and make a polite request to take his portrait, you will have entered his "safe zone" while opening yourself up to the same  uncertainty, and potential rebuff, but you might actually get to make an image that you like and that seems good.

I'm only 66 years old and have really only been photographing in earnest for about 47 years. I've worked in many different countries (with a camera) and navigated streets with people from very different cultures all around me. I count on the fingers of one hand the number of times I've met with any sort of hostility or threat. That's a damn good batting average and I have to admit that I'm not doing anything special. I have not magic fairy dust. No special armor that protects my tender ego. I do, however, understand statistics. And the more often you ask, or shoot, the better and more comfortable you get at the process. And the social interaction that sometimes goes with it. People may decline to be photographed but a gentle demure is a long way from aggression...

I find that most people are good natured and accepting of others. There are plenty of people on the streets with mental health issues and I routinely get yelled at when I walk by them (camera or not). Some are very bombastic. But most of them seem quite cognizant of where the limits of combative behavior are and the consequences of stepping over the lines.

I was almost robbed in a back alley, after twilight, in St. Petersburg, Russia, in the dead of winter, back in 1995. Just after the collapse of the Soviet Union, but that's a different story for a different time. It's a true "Henry White" episode. But that was on me for taking too many chances and not paying attention. But on a typical street in middle class America? Not so much.

If a disturbed person demands money, or my camera, I just say, "No." and walk away. So far it's always worked. But construction workers hardly fall into this category. In my experience... never.

There are rules on both sides of the photographer/street subject territory. You ask, or gesture, or take your best shot unannounced. If the subject says yes you turn your new acquaintance into a collaborator and proceed to make your art. If they say "no" you say, "no sweat, but thanks anyway." And you walk on to the next potentially good shot.

I think shared stories of imagined, fearful encounters and inflated threats aren't healthy instruction for younger, less experienced photographers who are trying to find their way in the craft. For every horror story you hear about a confrontation in the street there are thousands, probably millions of stories of people who are enjoying the fun and challenges of street photography unscathed and better for it.

Being out and immersed in your own culture brings a healthy and sometimes compassionate understanding of how you fit in and how a society functions. Let's not make life seem bleaker than it already can be.

Just practice being a nice human and hope that your example attracts reciprocity.