On Politically and Legal Safe Ground. My review of the Nikon F... 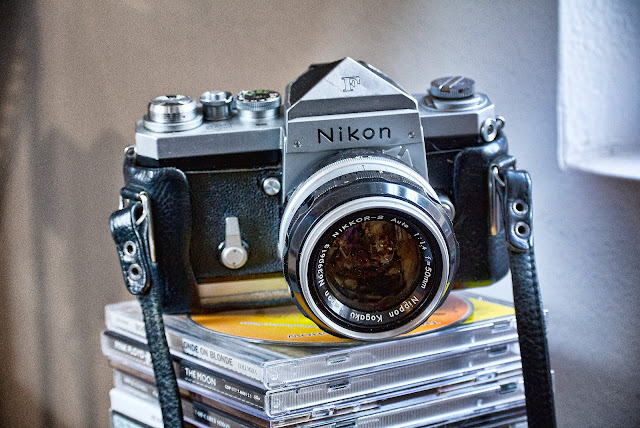 The Nikon F.  Image by Kirk Tuck ©2012 Kirk Tuck.  This image has been post processed.
We were ready to be impressed by this one from Nikon.  It had gotten such good previous press.  And there are things we like about it but let's get the less positive stuff out of the way first.  This camera is not digital.  It only takes physical film but it does operate in a semi-open system architecture.  You can use any brand of spooled, perforated 35mm film, available from a wide (but ever diminishing) circle of suppliers.
We were horrified to find that instead of a bad, dim, dark rear LCD screen that requires the viewer to keep his or her eye centered behind it to see it properly, Nikon have left the screen off altogether.  We'll presume that this was an attempt to keep manufacturing costs down but...we at VSL feel like that's just one step too far.  Of course, LCD's may not have been available at the time of design but surely they could have put a little cathode ray tube back there, just to, you know, preview stuff.
Which brings us to our next criticism.  No Menus.  None? Nope.  Astounding.  I fiddled with the damn thing for nearly an hour, trying to find a way to auto bracket or to fine tune exposure.  I couldn't even find a color space setting.  Now that's primitive.  In frustration I sent the camera to our fully equipped and space age lab for further analysis.  Within days they had researched, poked and prodded and found the source of the design defect.  In a word: battery.  The camera maker had forgotten to include a battery in the package.  Or a place to put a battery.  It was all so mysterious.
We did some more research and consulted with a very, very old photographer (over 40!!!!) and he let us know that this Nikon F body was actually designed that way.  He showed us how to read a meter that lives outside the camera (but be careful, you'll have to choose a film first) and how to set the few controls available. And we were off and running.  Kinda.
We stepped outdoors, put a slight pressure on the shutter button and ..... nada.  No focusing.  Defective lens?  Not according to our consultant.  The lenses were meant to be focused by hand, like the Zeiss lenses currently on the market.  We tried turning the lens barrel, as instructed, and were rewarded with improved focus.  But even though we looked everywhere we were unable to find the diopter.  With our eyes and that old screen we'd be lucky to get 50% of the stuff we shoot in focus, and that's outside in good light!
The buffer in the camera is pitiful.  No matter how much time we waited between shots the camera would always stop at 36 frames and not budge.  At one point we even left it "on" overnight to see if the buffer would clear but, no.  And it's apparently WORM  (write once, read many) technology because once you've hit the buffer you actually have to introduce new memory.  And that's not cheap.
The top shutter speed is a dismal 1/1000th of a second and the shortest timed exposure is 1 second.
Here's our executive summary:
While we were anxious to buy into the hype surrounding this camera we knew at the outset that we'd been sold a "pig in a poke."  When attempting to first load "film" memory in the camera the entire bottom fell off.  Right onto the ground.  The camera lacks even the barest degree of customization ability and it shoots only as quickly as you can push a lever 120 degrees with your thumb.
On the other hand, the non-battery lasted forever and the lens was fast, sharp and well corrected.  Our recommendation?  If you're into fast shooting, extreme sports, quick work, total control or.... just about any metric you can imagine then this camera is definitely not for you.  So, how are they positioning it in the market?  Would you believe they are trying to position it for professionals?  Our prediction?  They'll need a lot of marketing (and just the right kind) if they are going to make any head way with this one.
See our gallery of 4x6 inch prints on the refrigerator....
Here are the specs:
Big.
Heavy.
Slow.
Construction:  Metal on metal and more metal.  With metal.  Everywhere.
Positives:  We were unable to destroy it in any fashion.  We even used it to chock  the wheels of a large school bus on a perilous incline.  We liked the noise it makes when we push the button.
Stayed tuned. Next month we'll be reviewing the Canonet QL17.  Camera, Icon or Ruse?
Posted by Kirk Tuck, Photographer/Writer at 17:47 38 comments:

Dis-attachment-ism. My new religion. Works for just about everything. 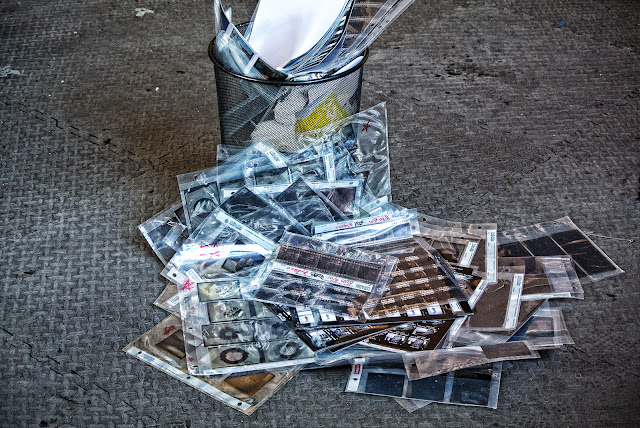 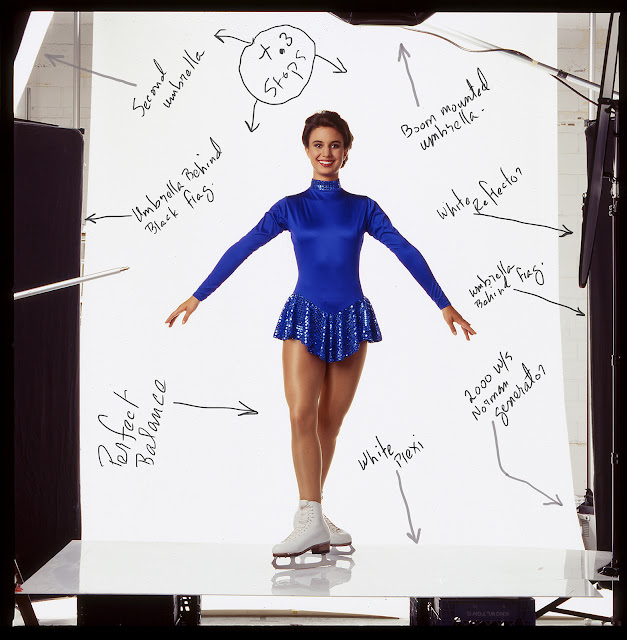 Ad shot from the 1990's.  A Quick and clean revisiting of White Background Lighting Techniques from the film days. (ie: before you could just cut stuff out in PhotoShop).


If there's one subject that comes up again and again on lighting forums it is: "What is the correct way to light and prep for a white drop out background?"  Time and time again the bold rush in to suggest everything from blasting the background with one huge flash to shooting against black and just cutting it out with Gimp Tools XP10.  But there is actually a method that used to be taught in all the photo schools or learned at the feet of the guys who did it before you.  And it made sense back then.


I thought I'd put this up for three reasons:  I like the image of the skater.  I was playing with the pen tool I've had for ten years and remembered how much I like to scrawl things across photos.  And finally, a younger photographer, who will have to do many, many of these kinds of shots asked me to.

In the shot above I'm starting by rolling out a nine foot wide seamless backdrop of Super White paper.  I roll it so that the front end (right behind the skater) is at least 12 feet from the plane of the hanging paper in the far background.  This allows me put an even light on all of the background but leaves me enough room to scrim the background light off the skater with black panels.

I'm using five lights on the background.  There are two flash heads on either side of the set and all four of them have white umbrellas with black backings on them.  They are aimed at the opposite sides of the seamless so the light feathers across the surface.  I've also added a center light, high up to both clean up the middle of the background and also provide additional light (via careful feathering) to the paper that's spread across the floor behind our model.  I always attempt to light the backgrounds so that every surface that shows to the camera is within a 1/3 stop of everything else.  Having too much light in a spot is just as bad as not having enough when you don't have the luxury of hands-on post processing.

In front of the background paper I've placed four sturdy milk carton holders to elevate my model's platform.  I've placed a stout piece of plywood under the shiny, white Pleixglas for support.  Having the platform raised means that, at the angle I want to shoot my dancer and the focal length I'll use, I'm actually seeing the far end of the white paper at her foot level instead of the part of the paper nearest the camera.  This is pure white and gives me a great reflection back on the shiny plexiglas surface which works to obliterate detail and go as white as possible.  It also gives me a nice reflection of the skater's blades and shoes right in front of her.

The one boom arm you see coming into the frame on the left hand side is tightly secured to a solid tether and it there so the skater can reach out and steady herself if she starts to lose her balance.

I'm using a large (54 by 72 inch) Chimera softbox from about 45 degrees to the left, in front of the skater and just far enough away so that it won't show in camera.  The only other source of illumination is a white fill reflector from the opposite side.

I meter (with an incident meter) the background and get a reading.  In this case it was probably f11 and 1/3 stops.  I then meter while adjusting the distance of the softbox to the model until I get a reading that's one third of a stop darker on the model.  In this way I am assured that the background will go pure white but I'm equally assured that the least amount of light will spill forward from the background lighting to contaminate (and lower the contrast of) the model at the front of the set.  In this situation all we left for the color separator was to clean up the area around the model's feet.

Even in the zenith of our digital days I can think of several reasons (all lighting and lens oriented) to maintain the same lighting practice.  Less spill means less veiling flare.  And, as I've written, less unwanted contamination on the subject.  The even-ness of the background means that, even though you will be using the selection tool in Photoshop you'll have less issues to deal with and will spend less time with "refine edge."  Finally, if you get used to doing it correctly you'll see that it also works just as well for video.  And it's easier than "green screening" everything and fixing it all up in post...

I won't get into the argument about "incident meter versus reflected" or exactly how to hold your light meter.  I think that's too personal to talk about on a public blog.  And I do think you'll figure out your own technique.  After all, you can see the results right away now.  But can you see 1/3 stop above white, on your camera's histogram?  Meters are still relevant.

We took the day off today.  Back tomorrow to discuss portfolios for the new age of screen dominance.  Maybe.
Posted by Kirk Tuck, Photographer/Writer at 16:51 8 comments: