Quick and easy light in a very small space. 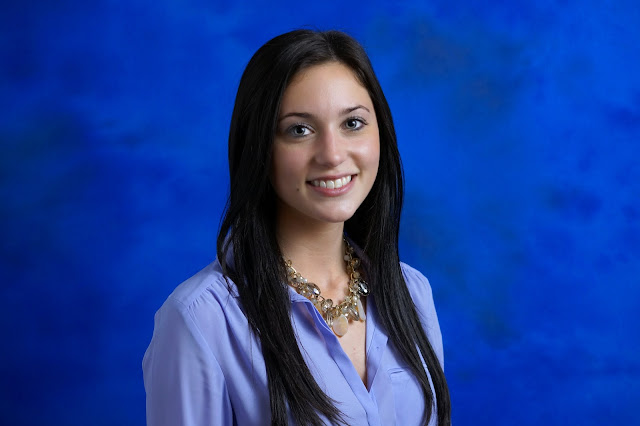 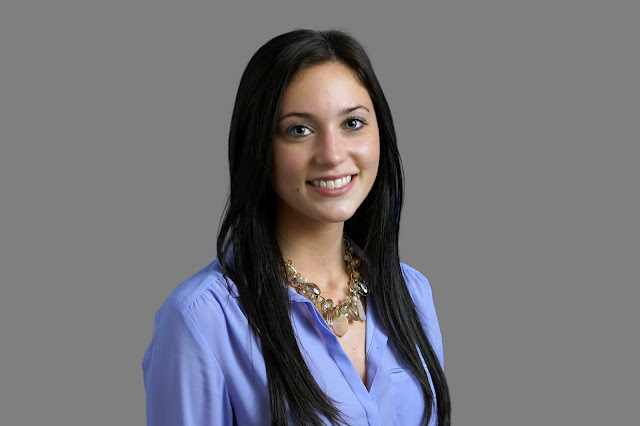 Added 12/09/2012: Background dropped out. No color corrections other than lightening Lauren, overall. I'm not sure what background the designer will finally use on the web but taking the blue out totally changes my perception of flesh tone, etc.

I often end up shooting quick portraits in tight places. For most of my career I carried around heavy monolights or pack and head flash systems for even the simplest of shoots because that's how we did it. Six or seven years ago we started doing smaller shoots in smaller places with portable, battery powered camera strobes but even that is more complicated than it needs to be. You've got to have flash triggers and a modeling light to be able to really see what you are doing.

Today I needed to go back to a company I'd worked with last month to photograph the last few people for their website. These were folks whose schedules precluded them from being at the first shoot. I'm using this garish, blue background because we'll be dropping out the background altogether and putting a solid color in behind the person, so we just needed some color to separate the subject from the background.

This is a one light set up. I have a 60 inch softlighter umbrella set up over to the right hand side of the frame. I was originally going to use a flash to do this shoot and I brought a Fotodiox 312 AS LED panel along to use in the dimly lit room we were put in as modeling light or set light. I stuck it on the light stand with the umbrella for some extra illumination while I was setting up. But when I looked at the quality of the light from the panel, bouncing off the umbrella, I decided to forego the flash altogether and use the light as I had it set up.

I filled the light from the LED panel and umbrella with a white reflector just out of the frame on the opposite side from the light. Two technical things make this work for me. One is that I brought along a tripod. That let me go as low as I wanted to in order to get a good exposure without any camera movement. The second technical thing, which I'm concentrating on more these days, is making a custom white balance.  Once my one light was set up and positioned I pulled my white diffuser into the frame and made a custom white balance measurement directly from the white fabric. The camera set a value of 4300K temperature and +2 M (which is a very, very small adjustment away from neutral to compensate for the very, very slight shift to green caused by the LED light profile). I did not use any sort of color correction filter on the light or the camera.

I used a custom white balance because I am becoming more aware that changing WB in raw has the effect of subsequently changing the exposure of the image file. If I had the perfect exposure with the wrong WB I would then have to compromise exposure and fiddle more with the basic parameters of the image to get back to neutral. The proof is in the tasting of the pudding. The file above has no color correction or exposure correction applied, and it is a jpeg.  To my eye the file is just a little bit "cold" but I think when I drop out the blue my perception of the skin tones will change.

That the scene was lit by a $149, battery powered LED panel still fascinates me. Everything is a trade off but this set up is one I'm happy to take. Every piece of gear I used was hand carried in one trip from the car.

I used a pop up background on a single, centered stand. The reflector was on a small stand with a clamp. I shot with my Sony Nex 6 set to Jpeg fine/large. The creative style was set to "portrait." ISO 800. Exposure setting f2.8 at 1/30th. I photographed six people with this set up this afternoon and the batteries in the LED panel, after over 150 exposures, still showed 75% full. And remember, I could shoot as fast as I wanted to without concern for recycle times because the LED panel kicks out continuous light.

I used Sony's 50mm 1.8 OSS lens and since I was on a really good tripod I turned off the image stabilization. I think the lens is great. It's sharp enough but has a nice look to the out-of-focus area of the background. After looking at the files I decided I needed to order just one more panel from Fotodiox so that's on the way.

Below is how I have the LED panel set on the umbrella.

Had I been using the a99 I might have shot at ISO 1600 or even 3200 and used a higher shutter speed. Not that it would have mattered much. It's so much easier to focus and see in a darker space when you add a good continuous light as opposed to trying to do it all with small flashes. The LED panels are perfect for applications like this. And they've become much more color neutral even within just the last year.

Thanks to Lauren at the Spa for graciously allowing me to use her image in the blog. 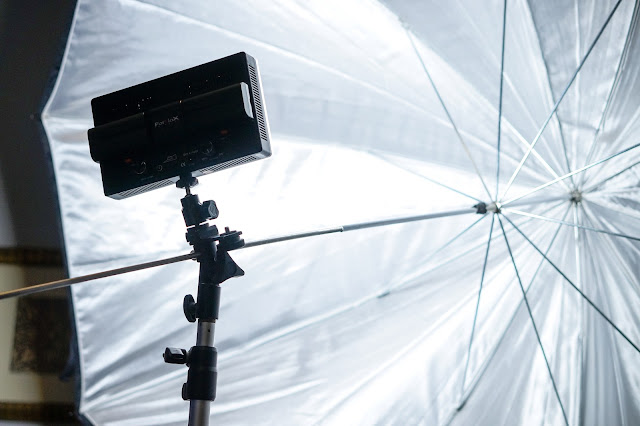 But is the Sony Nex 7 sharp? I mean, really sharp? 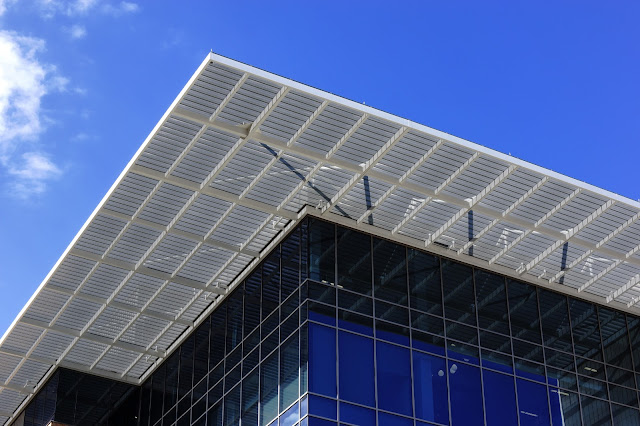 It was a nice, brisk day in Austin in late November. I needed to deliver some image files to the college of Petroleum Engineering at the University of Texas. Good luck finding parking anywhere near the side of campus that contains the Petro complex, with 50,000+ students looking for parking every day you may as well be looking for $20 bills scattered on the ground. I used to teach at UT so I know the drill: Take the first open space on your journey in that coincides with your comfortable ability to walk. But when you walk a mile to your final destination be sure to bring along a camera in case you see anything that you need to photograph.

I had a Sony Nex-7 with me and it had an adapter that let me use "A" lenses from my bigger DSLT Sony cameras. I had on one of the cheap Sony 50mm f1.8 DT lenses because I anticipated doing some casual portraits later in the day. With a 75mm equivalent focal length it wasn't quite the "standard" lens for shooting a bit of architecture.  But as artists, sometimes we have to make due.

After I delivered my flash memory stick to the right person I turned around and headed back towards the car. I walked down a street called Speedway and I was amazed at how many new buildings had popped up since my last walk through campus. Some of them looked quite striking so I set the camera the way I wanted it for a sunny day and started snapping away.

I was using the sharpest, middle apertures of the lens and trying to hold everything steady. I think the files are fun and that the Nex 7 is really a sharp camera when used correctly. While the kit zoom is reasonably good prime lenses are even better. 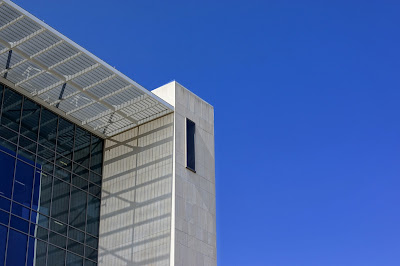 I'm equally happy with the performance I'm getting out of the Nex-6. So yesterday I spent some time packing a small Nex kit to use for most of my fun work. It consists of a Nex-6, a Nex-7,  the kit zoom (mostly for the widest angle), the Sigma 19mm, the Sigma 30mm, the Sony 50mm 1.8 OSS and the lens adapter for Sony "A" lenses. I've also added a Metz 36 flash, dedicated to the weird and proprietary Sony hot shoe. I've got four extra camera batteries and four extra 16 Gigabyte Transcend SD cards packed as well.  All in all it seems like the perfect little travel system when it's all packed in the little moss green Tenba backpack I bought earlier this year.

When everything is packed together I can just grab it and go. It's the counterpoint to a more extensive system I'll be using most of next week... 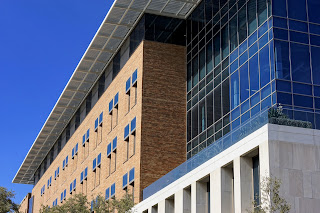 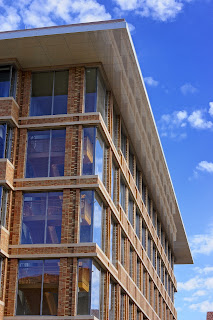 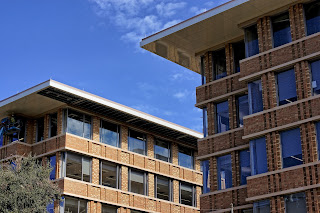 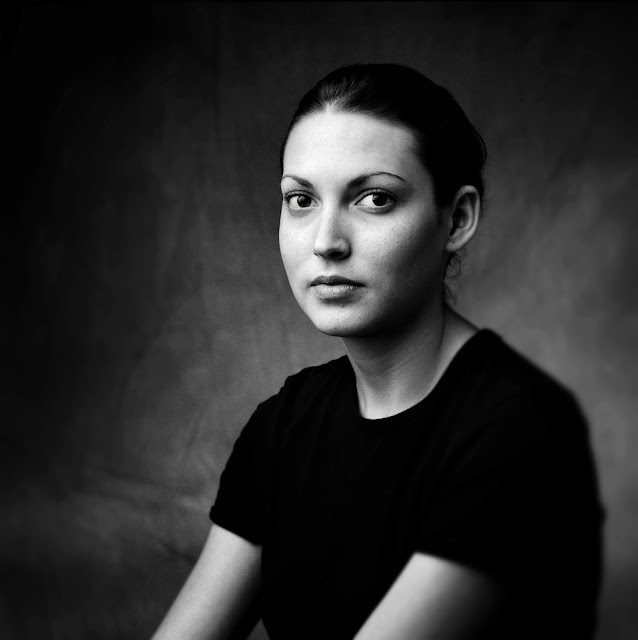 I love to make portraits. I love that not all of my subjects are required to smile. I love that we can spend time talking about life while we're making portraits. I love to work in black and white but I don't fear color. I love light that can be both dramatic and flattering. I love the contrast of dark shirts against light skin. I love longish lenses and continuous lights. I love going back and looking at old contact sheets to look at the "paths" not taken and then re-scanning and reprinting to see if my tastes have grown or changed since we last peeked into the contact sheets and made our choices.

I love feeling the day slip away outside my windows while the slow and comfortable process of making a portrait unfolds. I love to hear the snap (with miniature Mercedes Benz door closing sound added in) of the shutter and feel the waft of photons fly through the room.

But the part of the portrait experience I like best is what I did half an hour ago. I sat down with a stack of contact sheets and went slowly through them, looking at every frame. And then I found something I'd never really seen or paid attention to before and I zero'd in on it and scanned the negative and worked the file.  And now, regardless of whoever else likes the image I have made a little gem of art for myself. Something special and intimate and non-repeatable.

I count myself lucky that I can still make a living doing the work that I love. Not every client wants to step outside of tradition and popular taste and embrace a distinct style, and that's okay because I can switch gears and become a traditionalist for at least the duration of a shoot. But there are enough people out in the brave big world who like new, different and bette and they are the bread and butter of what we do.

While I guess it helps to learn  how we did it in the bad old days I think we should embrace our own vision and press it forcefully into the world of commerce. How else will the paradigms change?
Posted by Kirk Tuck, Photographer/Writer at 15:11 5 comments: