Did you ever stop to think that maybe you became a photographer for a reason that you never really thought of before? 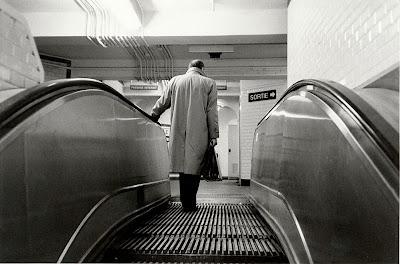 For as long as I can remember I've been in love with the process of writing. One of my early heros was Vladimir Nabokov. He wrote beautiful sentences. He wrote wonderfully visual descriptions. And he wrote with an incredible ear for narrative. Many years ago I got a degree in English Literature from the University of Texas at Austin and started a career as a copywriter in the advertising industry. Sometime in the whole mess of becoming a real, dues paying, adult I got seduced by the promise of photography= that one could make art with less fuss and commitment.

Even though I consider myself to be a "middle of the road" photographer I've been able to make a living at it for a variety of reasons. Early on there were enough barriers to entry in the field so that you actually had to know what you were doing and how you were going to do it to make photographs. I picked up enough marketing smarts early on to be able to sell the sizzle instead of the dektol. I made enough friends in the business who needed fairly straightforward work from a reliable source and I rode the reliability horse for years without ever falling off.

But as I put my fourth book for Amherst Media in the Fedex last Thurs and the went out to celebrate over margharitas with Belinda it finally dawned on me what the allure is for me. It's note taking at its most immediate. Looking back over fascinating trips to Russia or Maui it's not the photographs I want to share when I get back home, it's the stories. I spent a week in Monte Carlo several years ago and I don't think any of my friends saw any of my photos. I sent what I needed to over to the client and got well paid but for me the thrill was in sharing the stories. I was the first American to set foot in the Alexander Palace in Pushkin, Russia a while back but I would rather regale my friends with stories about sneaking off to use the Czar's toilet than wave prints of the Catherine Palace Golden Ballroom in my friend's faces.

I suspect many of us were lured into photography for reasons that have never been clear to us. It was interesting to have this epiphany. Now I see the interconnection between the two crafts; writing and photographing. It's clearer to me than every before. It's all about the storytelling.

The image above is from one of the last Metro stations in Paris to still have wooden slat escalators. It was taken back in the mid 1990's with an old M3 and a 50mm. Great gear for preserving the feel of history and the flow of life.
Posted by Kirk Tuck, Photographer/Writer at 23:37 6 comments: