A trip to the Blanton Museum to see "Matisse as Printmaker". 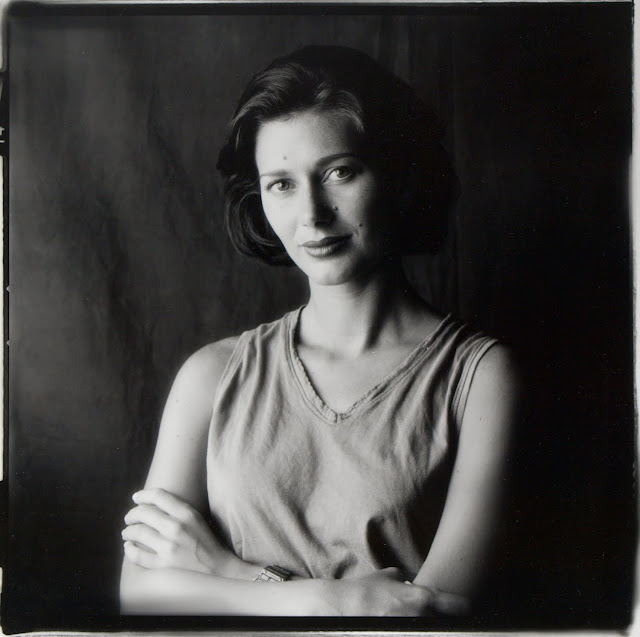 Once again, this photograph has very little to do with the post itself.  It's here because I like to look at it.  Michelle in the studio.  film.  paper.  scanned.

Belinda and I dropped the boy at the swim club and headed over to see the Matisse exhibit at the Blanton Museum today.  I am famous for putting things off to the last and, as you might guess, the show closes tomorrow.  I unabashedly love the Blanton.  Their eclectic collections are usually just provocative and quixotic enough to intrigue and entertain.

Let's start at the top.  This was a well curated collection of Matisse's lithographs, woodcuts, sketches, linoleum engravings and other kinds of prints.  While the show displayed only a few hundred pieces it's interesting to know that Matisse had completed well over ten thousand pieces by the time of his death.  And judging by the show and the information in the catalog the overwhelming majority of his works incorporated nude or nearly nude women.  So,  practice makes fluid and beauty is addictive.

Let's talk about the quantity first.  It takes practice to get to the point where an artist can create a fluid line that, in one brief flicker, that belongs, without question, to that artist.  Matisse used iteration after iteration to distill his vision.  To hone his craft until he was able to create a fully realized work with a radical economy of line.  Like the hauntingly simple melody from the first line of Gershwin's "Rhapsody in Blue".  Hear it once and you're not likely to forget it.  See the sure course of a Matisse pencil line and you're not likely to forget that either.

While he was alive Matisse was constantly experimenting with his vision and his style, not just in painting but also in sculpture and prints of all kinds.  But his subject matter stayed focused on the female form,  it's design, it's display and, very much, the sense of gesture.  I believe that it was the constancy of his practice that pushed his art to prominence.

And he chose a subject matter that's been a major driving force of art since the dawn of man.  Female beauty.  While I looked carefully at the show I was reminded of a philosophy professor who once told me that all men are motivated by two things,  The sensual and mysterious allure of women and the power of money.  He further explained that men were drawn to the power of money in order to better attract sensual and alluring women.  I told him that it was really only one thing then.  He smiled a small smile and said, "Exactly."

To bring this all back around to photography I have several observations to make.  I am certain that some of them won't be very popular but I guess we're not holding a contest.

My first observation is that truly influential artists do their work to the exclusion of everything else.  While a few famous poets could work as doctors or publishing and insurance executives (William Carlos Williams, T.S. Elliot,  Wallace Stevens......) and still be successful, people in the plastic arts need to be absolutely immersed and engaged to rise to the highest levels.  Picasso is another artist who, like Matisse, was amazingly prolific.  People who do photography as a hobby, with full time employment in other fields, do not want to hear this.  But they've made a trade for other intangibles and it's not my intention to judge their circumstances or their choices.  Wanna be a world famous photographer?  Quit your day job.

My second observation is my own law called the "parabola of achievement and success".   It goes something like this:  If you fire a gun up into the air the bullet will follow a parabola or a curve.  The angle at which you fire the gun determines how far the bullet travels, linearly, away from you.  (Not its total distance travelled).  If you aim a gun nearly straight up the bullet will speed up and then come down and it may only land a few inches in front of you (depending on the trajectory, which is mostly influenced by the angle of the gun when fired.)  If you chart the success of most companies, fads, trends, styles and artists on a piece of paper you'll find that some catch on quickly and rocket to success.  On a graph they are a curve that heads north very quickly.  Some build slowly and organically.  Think of a company like IBM that took decades and decades to become the biggest IT company in the world.

Here's my law:  The faster the rise (the steeper the trajectory) the equally quickly they will decay and fall. The slower the rise the slower the fall.  Die at the peak and all bets are off.

The photographers that tend to become hot "over night" tend to fall into two categories.  The first category are the artists who've worked in relative obscurity before being systematically discovered by the cognoscenti of the art/photo world.  They paid their dues and worked the long curve.  The other over night successes are people who were launched into the market at a much steeper incline. Their launch corresponded with a hot style in which they worked on the sharp edge.   The law, "the parabola of achievement and success" predicts that their fame will be short lived and their notoriety extinguished like the appeal of white tasseled loafers.  Some of the overnight successes will build on their instant success to establish a new trajectory. But for most, the laws remain.  But in the end all artists grow old and die.  And when they are dead the only people who really care about the integrity of their trajectory are the ones who inherit their estates or have collected their work.

If it's all for naught then why even bother?  I have no idea.  Really, these kinds of questions are all tied up in the trauma and triumph of early childhood and how you respond to Rorschach tests and other bits and pieces best dealt with by mental health researchers.  But I do know that if I gave my life in service to art I would follow the examples of Matisse, Rodin and Jeff Dumas and try to photograph, sketch or paint as many beautiful nudes as possible.  You can have the landscapes............
Posted by Kirk, Photographer/Writer at 17:50 12 comments: