Sunday a day off? Naw. It's a day to pack and organize. 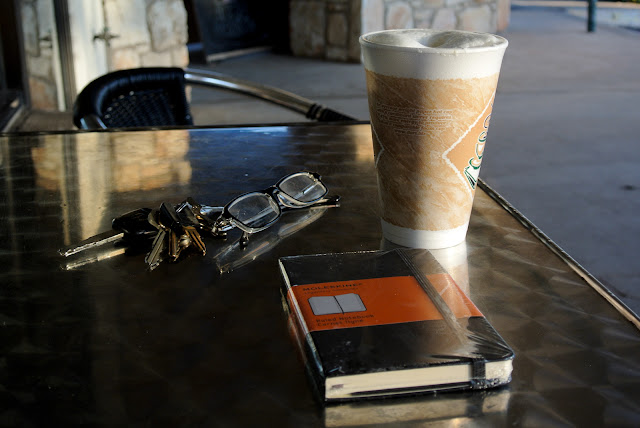 Let's get the crazy stuff out of the way first.  Yes?  Since I picked up the little Nikon V1 I've developed a cup fetish.  I can't stop photographing various cups.  At first I thought it was only cups that contained the creative elixir of the gods: coffee.  The above was shot with the 10-30mm at 18.xmm in the late afternoon, at Trianon Coffee Shop, in west Austin.  The cup contains an extra foamy, double cappuccino.  I thought I'd gotten it all out of my system but we went to lunch the next day at P.Terry's Hamburger joint and the magnetic pull of the cups on V1 was undeniable.  Even on the Catsup Cup.  That little paper remnant of time past. 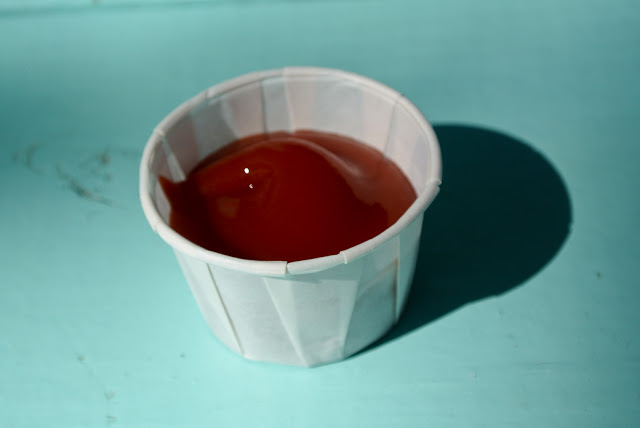 I meditated and prayed but nothing seems to have helped.  Even strong narcotics haven't lessened the grip of the cup/camera interface.  I thought healthy exercise would heal me but even after swimming thousands of yards on Saturday morning, there they were again.  The holiday cups at Starbucks. 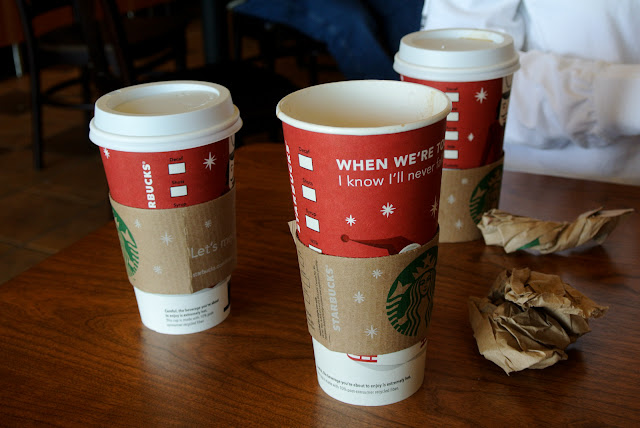 But I think there's light at the end of the caffeine coated tunnel.  I had a coffee this morning and I didn't have the V1 with me, only a Canon 1ds mk2.  I reached for the withering bulk of my professional tool but the magic wasn't there.  The camera seemed to sneer at my weakness for cup-o-graphy.  To taunt me for glorifying mere containers.  And so I've moved on.  It seems that, if I keep the V1 away from cups, and restaurants in general, I can keep this strange attraction at bay.  But.......maybe you should look closer....maybe I'm really on to something here. 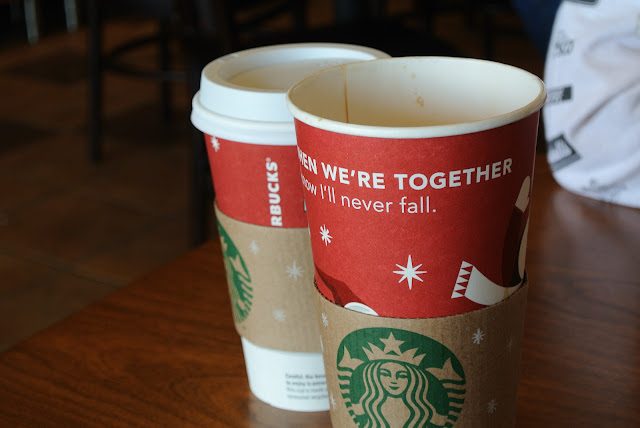 I mean, the P.Terry's cup, loaded with Dublin Dr. Pepper seems like modern art to me....Could it just be a case of misplaced Warhol-ism? 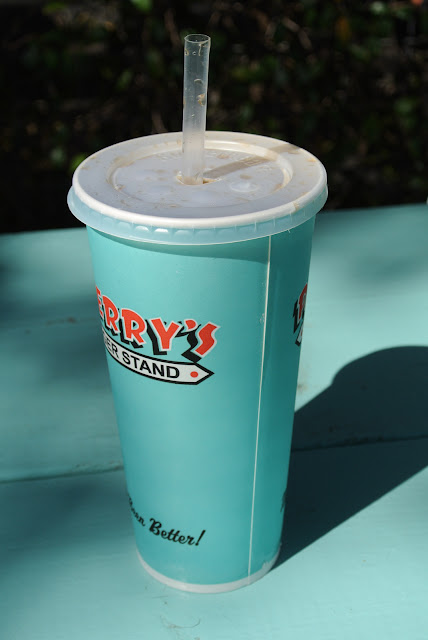 Leaving the cups behind let's get down to the real topic of the blog today: Organizing for a busy week ahead.  On paper, my week doesn't look very daunting but when I break it apart into discreet, granular chunks I wonder how I'll get it all done and still have time to swim and pursue my dalliance with coffee.  The short answer is:  I won't.
Here's the deal.  I start a conference project this afternoon at 4pm at the Barton Creek Conference Center.  I shoot until around 9:30 this evening.  Tomorrow and Tues. the conference continues.  I'll be photographing speakers and dignitaries from around the world.  It's dark suits and ties for me for the next three days.  I've even shined two pairs of shoes....
But a bigger consideration is "what to bring?"
I think I've got it figured out so all the batteries are on the chargers and I'm packing up memory cards.
Here's what I'm taking:  Canon 5Dmk2, 1ds mk2,  1D mk2N, 35, 50 and 85mm Zeiss single focal lengths.  Canon 24-105 and 70-200.  I'm also packing the Nikon V1 and the 10, 10-30 and 30-110mm zooms.  I'll stash a Canon 580 ex2 in the bag as well as a 430 ex2 as a back up.  Since I'm shooting raw I'll take 8 - 16gb CF cards and 10 - 8gb SD cards just in case.  I'll spend most of the time shooting presenters under stage lighting but I'll also need to shoot small group shots from time to time.  We did the same event last year and shot around 1800 images, total.  I'm trying to compress that a bit this year and aim for 1500.
I'm also bringing a 13 inch MacBook Pro and a dozen or so flash drives to I can share photos with the production crew.  Every once in a while a speaker's head shot will go astray and we'll need to provide a quick replacement.
The conference goes long on Monday and starts early on Tues.  We'll wrap around 5pm on Tues. evening and I'll come straight back to the studio to download cards and start processing in Lightroom.  I hate to get behind.
The next morning I'm headed into a recording studio to do a day of "behind-the-scenes" photos with an up-and-coming vocalist and her band.  From the recording studio I'll head directly to the Hilton Hotel on Fifth St. for the Boy Scouts of America, central Texas awards banquet.  It's a big fund raiser and my art director friend, Greg, always buys a table and invites me.  Also a suit and tie function.  The dry cleaners will be happy to see me the following Monday.......  Once the banquet wraps up I'll be in the Honda heading for San Antonio.  I'm booked there on Thurs. and Fri. shooting at a new Hospital.  People, property, professionals and whatever else is on the long shot list...  I'll need to pack three more flashes and some radio triggers for that......
I'll be back in Austin Friday evening putting the finishing touches on my LED Portrait presentations for Saturday and Sunday, the 12th and 13th.  I'm a speaker/presenter at the Austin Photo Expo and I'm planning on doing a live demo of my method of lighting a portrait with LED lights.  It would be good form to both figure out what I'm going to say and do, as well as finding the right model.  It's two presentations a day.
When I finish my last presentation at 5pm on Sunday I'll be rushing to pack up and get out because we're (the family) all going to an awards banquet at the High School for Ben's cross country team.  Starts at 6pm.  No suit or tie required.... 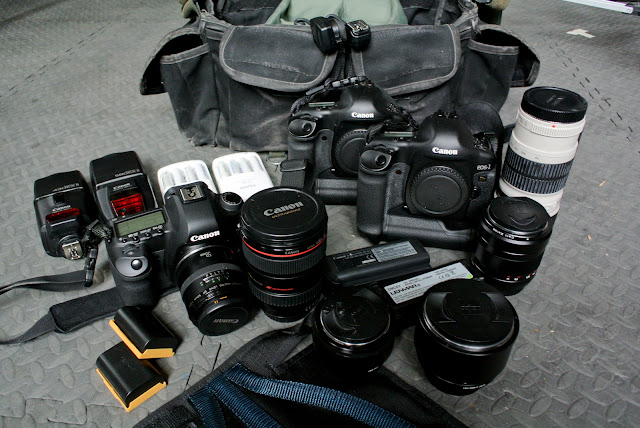 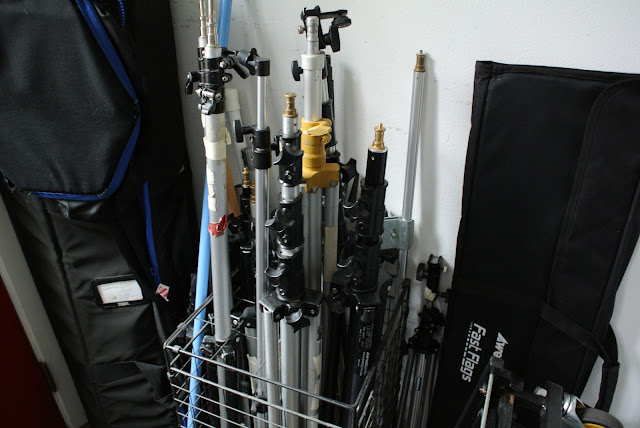 But once the demos are over and the equipment is cleaned up and packed away there will still be several days of post production for the three major projects of the previous week.  No one talks about the prep time or the post time but it's at least equal to the time spent on location and it's at least as important.  You get most of the stuff figured out while you're packing.  That leaves your shooting time mentally clear.  If it's not in the bag you're not going to use it.  A great incentive to pack smart. 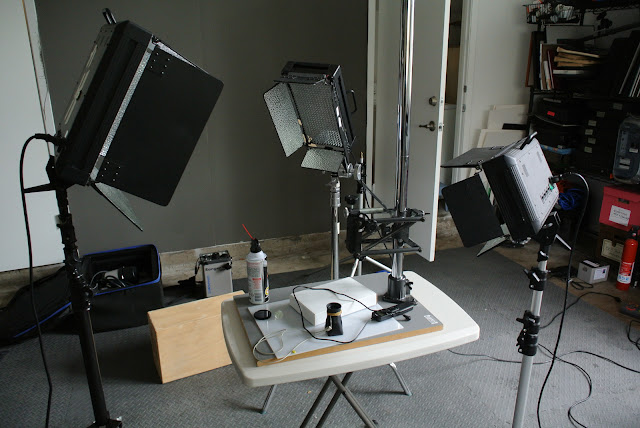 So things will have to wait until the following week to get taken care of.  For instance, the semiconductor shoot from last week.  The images have all been delivered but the three LED lights need to be taken down and packed away.  The stands put back in their place and the copy stand disassembled. 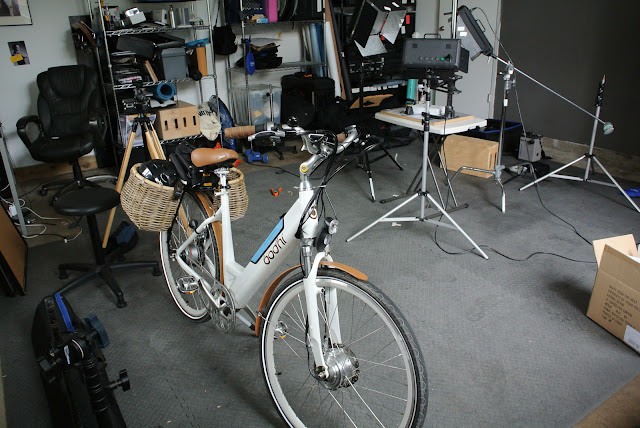 And then there's the office in general.  It could use a new coat of paint, a thorough cleaning and some re-organization.  Maybe we'll get to that after Thanksgiving.   But only if nothing better comes along.
(In the foreground is my Bodhi Electric Bike.)
There's so much more than photography that needs to be planned.  Since Belinda is working on a big project downtown I've hired a dog sitter to come in and assuage the pack separation for Tulip the wonder dog, and Ben will have to walk home from school.  The delivery service will get the disks from last Thursday's shoot over to the client sometime monday morning.  We'll get billing done at night.  The transition between my different jobs means different packing and different lists of gear.  Any free time means more work on the presentations for the Austin Photo Expo.  And somewhere in all this I'd like to get in four long swims during the week.  Might have to head to UT for the 5:30 am swims, yikes!!....
I know what they say on the news about the economy but it's sure starting to feel "Pre-2006" around here.....and I love it.
Posted by Kirk Tuck, Photographer/Writer at 13:25 20 comments: