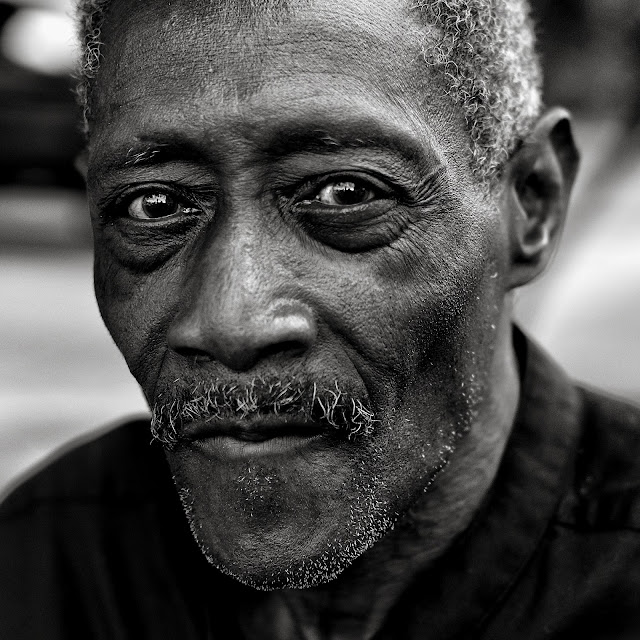 I was walking along Congress Ave. with my friend, Frank.  We'd just crossed Third St. and we were heading north.  This man was at the intersection and he caught my eye and I caught his.  We smiled at each other while Frank and I walked by.  Five steps later I turned around and approached him.  "How's it going?" I asked.  "Pretty good." was  the reply.  I asked him if I could make his portrait and he smiled and gave me his permission.  I directed him a little bit.  I asked him to look right into the lens of my camera.  He did.  I clicked off a few frames, thanked him and shook his hand.

Then he hesitantly asked me if I could trade him one or two dollar bills for the change he had in his pocket.  I didn't need the change but I had spare ones. We wished each other well and Frank and I continued north on our walk through downtown.  It was a nice encounter.  His face is wonderful and his handshake was expressive.  It made me happy to be a photographer.

I spent today with my camera in the "black and white" mode.  That's a setting on the picture styles dial.  I shot the largest size, extra fine Jpegs.  I was using a Sony a77 camera and this portrait was done with a 50mm 1,4 Sony lens that I picked up used recently for a couple hundred dollars.  I was shooting at ISO 400, 1/1250th of a second, f2.8.  I added a little contrast and warmth to the file in post processing.

I'm very happy with the series photographs this man gave me and consider it a small sign from the universe that I'm on the right track.
Posted by Kirk, Photographer/Writer at 18:23 11 comments:

Email ThisBlogThis!Share to TwitterShare to FacebookShare to Pinterest
Labels: Sony a77 portrait

Swimming with a Jet Pack on.... 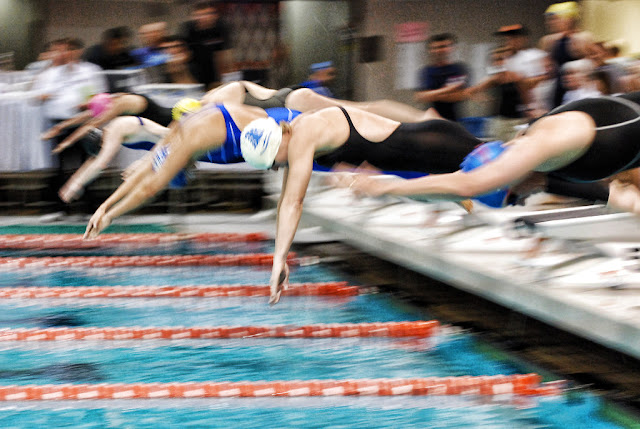 Over at the Online Photographer last week there was yet another discussion about the film vs. digital wars.  The film people (in a nutshell) are saying that the switch over:  1. Caused the mystery (and magic) of photographing to be killed.  Like telling everyone the surprise ending of a suspenseful movie while they are standing in line for tickets.  2. That people no longer have any real skin in the game because the process changed to become "too" easy.  And that, 3.  Since digital makes it all so easy people just shoot with mindless abandon and create a virtual landfill of fatuous crap.

One the other side of the coin the total converts (wholesale converts always being the most zealous and rabid extremists) to digital pronounce the nostalgia  or supposed superiority of film to be bullshit.  Many  (a good proportion self professed techno geeks) argue that the previous cost and rigor of film (Drop it off at a lab?  That's too tough?) were so daunting that they would never have considered taking up the hobby if "free to use" digital had not come along.  They also point to the fact that you get to have instant feedback, via your rear of camera LCD screen (now an OLED screen on my Sony's) and it helps them learn quicker.  They further add that with the crumbling of film infrastructure the battle for film is already lost....

I'm often caught between the two sides in my daily role as a professional photographer.  I can see clearly that the boundaries offered/demanded by film did require people to be much, much better visual technicians than they are now.  But I am also pushed relentlessly by clients who want to reduce cost and reduce turnaround time.  And it's all swirled around in the cosmic blender with the primary ingredient that drives most business transactions: The balance between dirt cheap and good enough.


Anyone can (and will) argue with me but I come down firmly on the side that says knowing and practicing within the formal boundaries of film use makes better photographers, even when they incorporate digital cameras.  Knowing the vital workings of a craft translates a fluidity to every corner of the craft.  To know how to do something well and know why you need to know how opens the doors of consciousness and intentional creativity.  Depending on a button that says "P" and then hours of post processing silliness (disguised as serious "art") breeds a "spray and pray" shooting philosophy that rewards random quantity over diligent pursuit.

Yes, yes, I know that you personally are a super human who can bring the same rigor to either side of the track.  You are the master of your tools.  And you like to call them "tools" because to label them as such allows you to feel a sense of mastery over them and your new process.  You are probably the same kind of person who can wade through the on-line septic tanks of image sharing sites without even getting your trousers wet because you have this wonderful ability to ignore the things that don't interest you and focus only on the "gold" you find scattered throughout the dreck.

But the rest of us are not so super human.  We use our brains in the way evolution molded them.  We look through the total stack to find patterns.  We analyze and reject or accept.  And we try to fit all the pieces together like working an immense jigsaw puzzle.  That's how nature and evolution worked to make our current brains.  And that's why each of us is conflicted about the sea change from film to digital.  The delivery methods and quantity overwhelm our processing facilities.

Am I saying that digital is bad and film is good?  Hardly.  I think they both do pretty much the same job in the end.  I'm saying that we should be careful what we wish for when we make the tools so easy.  Everything that's easy to do and free to undertake gets boring and devalued over time.  If you could eat all the good caviar you wanted, or have all the sex you wanted, all the time, both would cease to captivate you.  That's the nature of our attention spans.

As work becomes easier and easier to do with a camera (or phone) the intrinsic value in the by product seems to unceasingly drop.  The perception of selective value can be shored up by inferring that the creator has some special magic (ala the power of celebrity)  to add but, for the most part, it's all show and marketing.

I pondered all of this as I read the article on TOP and the many quick responses.  And a mental image came to me.  It was a swim race.  All the swimmers were lined up on the starting blocks.  One or two swimmers had jet packs strapped to their backs.  The starting pistol fired and everyone dove into the water to race.  The race was between a number of high level swimmers.  People who'd been perfecting their athletic skills and mental skills for years and years.  Hundreds of thousands of yards of practice.  The winner of the race was one of the new jet pack swimmers.  He wasn't even winded.  In fact, he was entered in every race of the day.  And from that day on, once the jet packs were allowed in, all the records were followed by an asterisk.  And one day one of the highly acclaimed, new and better,  jet pack swimmers tried swimming out to the middle of a local lake.  But he wanted to try it "old school", without depending on the machine for once. Halfway out he ran out of energy, endurance and mental toughness (the things that come from diligent practice) and he drowned.  He couldn't do the art of swimming without his jet pack.  Or at least a pair of water wings.

So, I know that mechanically I can take just as good a photograph with a digital camera as I can with a film camera.  No argument.  You can measure it all for yourself.  (and most people who don't believe in magic or chance or the fine arts believe in measurement as the top qualification).  And you'll see that the files from the two types of cameras can compete side by side.

But some little glitch in my artist mind tells me that they are different.  I've talked about some cameras having a soul and some which don't.  People didn't like that.  But I recently read  a piece in the New York Times (thanks, Jim) that discussed how people change when they are given different talismans or trappings of a profession.  In short, when a person dons on the white coat of a doctor their scores for a number of psychological performance metrics soar.  When they put on the coat of a housepainter there is no improvement.  This points to empowerment via the Placebo Effect.  I would suggest that the same kind of transformation takes place when people pick up different kinds of cameras.  And I would further suggest that it's not just a "film versus digital" distinction but that there are further demarcations based on feel and size and structure; even amongst digital cameras.  I submit that we have a subconscious reaction to various types of artistic tools.  And we respond accordingly when we make art with them.  Even the super-men among us who will claim that no machine can sway their indomitable will...

Art history is a vicious bitch.  I hear a lot of people talk about how much better their work is with digital cameras and workflows but I personally don't see this trend reflected in art.  The images that art culture still talks about are mostly done on film.  Prove me wrong.  Show me work being collected into major shows and museums that is digitally based now.  Point me to the treasure trove of new stuff that is universally and critically acclaimed.  I'd love to see it. Other readers would like to see it. It might be happening somewhere but all the news on the digital front is about how cool the technology is.  Or about how quickly you can degrade and share a captured image.  We all love Gregory Crewdson, right?  All the stuff we know of his is from 8x10 film.

What about Steve McCurry?  Oh, right.  He used 35mm film for all of his iconic work.  Dan Winters? Oh no, that would be 4x5 inch film.

When we see a great (but ephemeral) fashion shot in a magazine it might not be on film but will almost certainly have been shot on a medium format camera.  So there are levels and stages.

We're in the early days of digital and we haven't found our footing yet.  This whole past decade will be our asterisk decade.  Eventually it will all get sorted out and people will make great art with the new cameras.  It's probably happening right now.  But I'd like to see it first before I pronounce its success.  Right now we're more enchanted with the jet pack than the art.  I see this reality everywhere I look...

Note:  This is being presented as an opinion, my opinion, catalyzed by an article I read on another site. It's not a declaration of science and fact.  You may have different experiences and see different results. No need to pop a vein in your head if you disagree....

Posted by Kirk, Photographer/Writer at 12:01 7 comments: 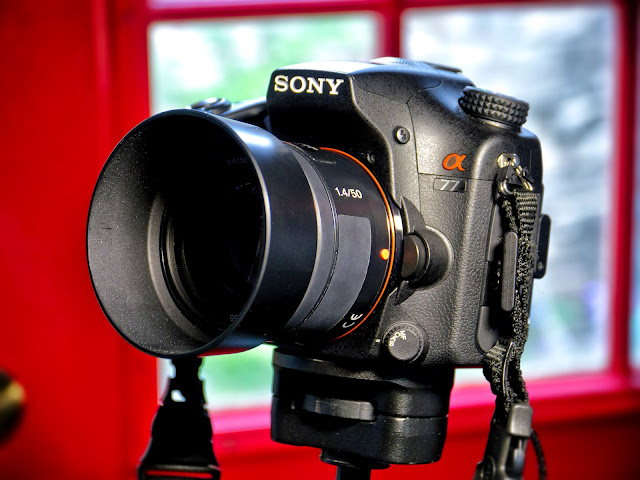 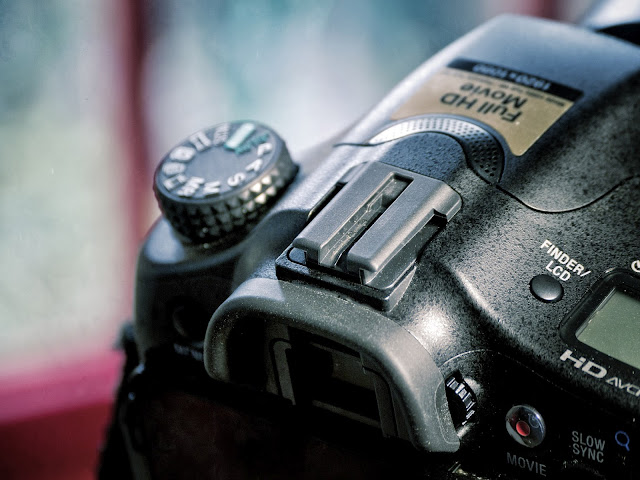