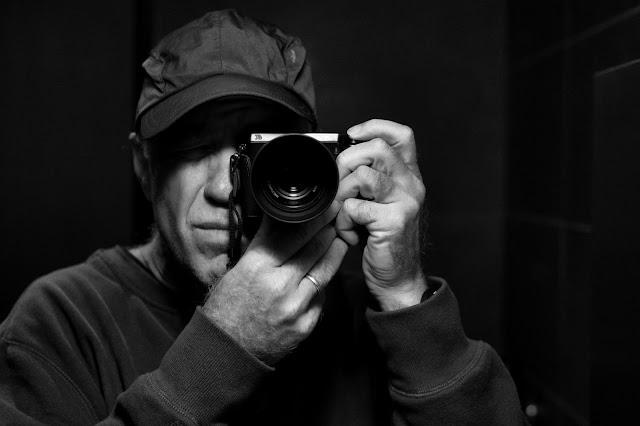 Me shooting a Nex 7 into a mirror at Caffe Medici on Congress Ave.

It's Sunday and the first really cold, wonderfully Fall like day we've seen in Austin so far. At 6 am everyone should be tucked into their warm beds, fast asleep and enjoying a temporary and happy state of short term hibernation. That would not be my fate. The alarm clock on my cellphone chirped and prodded me awake and I stumbled into the bathroom to brush my teeth and splash cold water over my face. The dog looked up from her comfortable chair across the room from my warm bed and then put her head back down with a look that said, "Too early even for dogs." She promptly went back to sleep.  We haven't turned the heater on yet but the temperature last night got all the way down to 43 degrees (f). I noticed, as I left the bedroom, that my dog still had, as a blanket, the old black sweatshirt I'd gotten up to cover her with in the middle of the night.  She seemed cozy and warm.

I padded down the long hallway and looked out the windows at the moonlit landscape. I sat in the dining room and put on my socks and shoes. Then I headed out to the studio to print off a finalized shot list for today's adventure. I didn't bother to turn on the overhead lights, a motion sensor turned on a small LED panel that illuminated the path to my desk.  After the list came off the printer I headed to the car.  I had loaded it last night. Three monolights with all the trimmings, large umbrellas, a trio of stout light stands, the old, wooden tripod and a case of cameras and lenses. Safe enough in the driveway. Safe enough behind the rock wall that divides the front yard from the street.

As I opened the door to the car and the interior lights jumped on I noticed an armadillo lumbering away from my front yard. He'd already dug enough holes looking for grubs and it was time to head back to his hidden lair. In my neighbor's front yard nine deer, from tiny spotted babies to horn bedraggled bucks, stood around eating grass and ornamental plants.

I drove off to get a cup of coffee and something to eat at Starbuck's to help me on my journey to my Sunday project; a photo shoot for a Spa out near Lake Travis. Hot whole wheat bagel with low fat cream cheese and a half caffeine, half regular grande coffee in the new and unstained cup holder of the studio Honda and I was ready to drive the curvy, four lane strand we call Bee Caves Rd.

At 7 am on the button I switched off NPR and got out of the car and stretched my legs. The cold air was so novel and bracing that I just stood and soaked it in for a few minutes, then I started to load up my little luggage trolley with equipment and headed into the Spa.

The owner was there and a cleaning person. We got to work arranging flowers and moving equipment. I set up a small studio in one of the treatment rooms and I would use a simple process green background, one light in a big 60 inch umbrella and round, silver reflector to create portraits of all the employees as they dropped by the spa all during the day. I dedicated a Sony Nex7 and the seductive 50mm 1.8 Nex lens just for that recurring task. With a Wein infra-red trigger wedged in the adapter in the hot shoe it was so easy to just pick up the whole package and shoot.  We did a dozen+ portraits over the course of the next nine hours. Just simple images for the web. I shot against the green background so the art director or I could easily drop the background out and paste in simple pastel colors and use the images on a newly designed website. We shot the portraits in between the main events.

When the art director showed up we started shooting interior scenes in earnest. I used a Sony a77, set to raw and sporting either the 16-50 2.8 Sony lens or the 10-20mm Sigma lens to create wide tableaus of the public spaces. It was past dawn by then and the soft morning light from the west trickled through the windows and curved around the furniture and flower arrangements. I used the camera on a wooden tripod so I could shoot at low ISO's and still use f5.6 or f8.  Every now and then I'd need to add some fill to an area, light up the far recessed of a hallway or spill light out of an open down. I'd grab an LED panel, one that has color temperature controls and continuously variable power control and simply place it where it was needed and visually match the colors to the existing light. Amazingly simple and elegant. A wonderfully efficient way to finish off the construction of static, architectural shots. Amazingly, the colors match very well.  I carried around two of the Fotodiox 312 AS panels I've often written about. After today's shoot I'm ordering two more and pressing them into more and more situations where I'm not at the mercy of the sheer, overwhelming power of direct sunlight. It makes shooting in interiors to easy. And fun.

After shooting half a dozen unpeopled interiors our staff and models started to show up and we proceeded with greater dispatch. We had a full dance card and I had every intention of not just checking shots off a list but of creating some art that would bring smiles to the faces of the spa owner and the members of the ad agency who would be working with my photographs.

We shot a couple getting massages. We shot them separately and together. We propped with flowers and candles and perfect little accessories. We shot people getting manicures and pedicures and facials and stuff I don't even understand.  And all the while we worked to make sure that the images we took would work in the constraints of a 16:9 format that was the template for the revolving "hero" shots on the homepage of the new website, under construction.

With the monolight in a small room for portraits the rest of our interior work was lit with one or two of the small panels. We were lucky that the Spa faces out over a golf course and indirect daylight flowed in and mixed effectively with the well designed interior light coming from interesting fixtures and well placed spots.

Late morning we headed outside onto an expansive deck and shot couples lounging, an impromptu catered lunch for five woman and lots and lots of images of the clear, deep blue Texas sky, cleared of haze and hesitation by the cold north winds that swept through only hours ago.  On the deck and under the covered portion of the deck I used powerful monolights with Varistar modifiers to fill in and bring the scenes into striking range with the radiant sunlight splashing over the backgrounds.  We worked the deck hard. We took a lot of images with variations and variations. I'll toss the ones I don't like in the edit but it's going to be a hard edit because there's so much to choose from.

I worked a with longer lenses on the patio so I could put the far backgrounds out of focus. My favorite two lenses for this kind of work were the Sony 85mm 2.8 (which is nicely sharp wide open) and the slightly shorter but equally snappy and sharp Sigma 70mm 2.8 macro.

It's never enough just to shoot the wide scenes and the establishing stuff, good coverage also calls for ample details that help give the flavor of a place. The flower arrangement on the painted, weathered chair, a plate full of macaroons and chocolate tarts,  half drunk bottles of white wine against crisp white tablecloths and the little clusters of dark grapes next to irregular shapes of chocolate on small, elegant bread plates.  They all add up to a feeling and a texture that feels like the last stages of an event you've just stumbled upon.

We break for lunch to eat and drink our morning props and consider the list of afternoon images.

Now we're back indoors shooting wide panoramas with models having their hair combed out or blow dried, LED panels pushing accents of light into the parts of the scene where I want eyes to wander. The camera's large LCD screen pre-chimping, via live view, what we'll see in the final shots.  Today I decided not to trust autofocus but to use the power of Sony's pre-chimping live view to magnify my target subjects in each set up and painstakingly set the best focus. It felt like I was wrestling back control from the machine and from the relentless inertia that pushes us to abdicate the use of our brains in this process and just depend utterly and unwittingly on the caprice of our cameras focusing systems, even though we've all been let down by them from time to time. No? Then you are either very lucky or lying your butt off.

Around 3 pm our art director left, exhausted. The lure of family and a few hours of recreation before hitting the office tomorrow called hard. The client and I soldiered on looking to augment our initial list and push for more.

At one point I knew we were both in the zone when we decided we wanted to show the spray of a shower, lit from below. Lights on the floor of the shower.  Being drenched by the powerful spray. Undaunted we put the LED panels into clear, plastic trash bags and put them, face up, on the floor of the shower, directly in the spray. The streams from the shower head were back lit and bottom lit and looked like serene science fiction. I wiped off the exterior of the bags and checked the LED panels. No harm done. We went off in search of more water features with which to tempt our LED's fates.

Finally, we done everything we could think of, had filled three eight gigabyte SD cards with images and done things with lights that most people never think of.  Around 5 pm I packed the gear into the car and headed back to the studio. The envelope with cards is locked in the filing cabinet and is in line, after two other clusters of cards, to be ingested tomorrow. I'll edit them over the course of this busy week and have a nice set of images on a Smugmug web gallery later in the week.

I was happy to work on Sunday, it opened up my schedule for a trip to Abilene this coming Tues. and Weds. The maiden long voyage (comparatively) for the new studio car. Apparently new studio cars bring their own sandwiches. Just thought I'd share a different kind of Sunday story.

Hope your week looks fun and productive. Nice to be swamped and challenged.

Posted by Kirk, Photographer/Writer at 22:15 9 comments: