Another food photograph from two weeks ago. 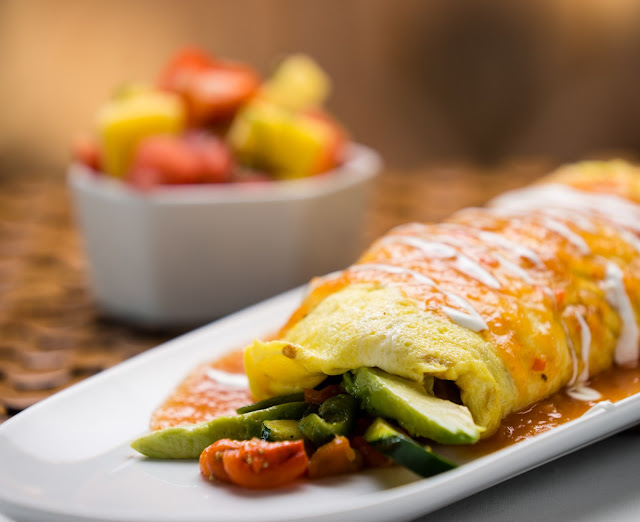 An Omelette with fresh vegetables from Garrido's Restaurant. Fresh fruit on the side.

Here's a quick way to kill a photography blog: Just show actual, commercial photographs and talk about how they were done. When I post some rambling article about my vague and contradictory feelings about being a photographer we get lots of pithy and even encouraging comments and feed back. When we talk about cameras, particularly mirror-less Olympus cameras, there's a crowd waiting to chip in with commentary, critiques and full blooded denial. Open up a can of EVF versus OVF and watch the sparks fly. But talk about the making of photographs seems to peel off the number of readers the way showing Alan Alda movies peels off male audiences.

Being the contrarian I am I'll just go ahead and post one more blog killing actual assignment photo post and see if I can save Google and Blogger some bandwidth.

Wednesday, a week and a half ago, my art director client, Lane, and I were making images of various entreés and appetitizers at David Garrido's restaurant on Third Street. I hauled in an assortment of older, first generation LED panels and set up a traditional beautiful food lighting design. 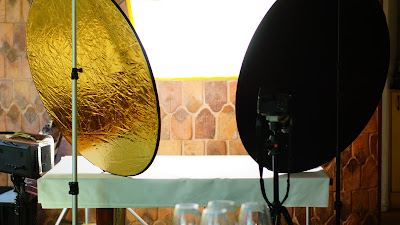 Here is the scene from the front. I'm using two big, pop-up reflectors to bounce light from the rear lights onto the food. In this image I haven't set up the main lighting yet. Most of the light will come from behind and above the food and the reflectors will fill in the front areas of the food. You could use foamcore panels, or just about anything else white or silver to reflect back in.  The beauty of using reflectors instead of actual light sources for the fill in is that they don't create secondary shadows and are easy to move in toward the food and back out again as needed. Some stuff needs less fill while some stuff needs more fill. 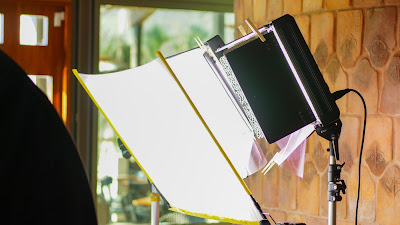 The image above shots two 1,000 LED bulb fixtures right up next to the back wall of tile you see in the first set up shot. The fixtures are both covered with 1/4 strength magenta gels to mitigate the green spike that dogged the first generation LED panels. The magenta filter gets the lights much closer to neutral and makes it an easy custom white balance for the current generation of professional digital cameras. The lights are both aimed through a 1.5 stop silk diffusion screen to soften the light and flatten out specular highlights. The screen is held in place with a grip head that allows me to rotate the panel into a more horizontal or vertical position, depending on the needs of a particular dish. This is something you do to taste by looking at the results in camera. 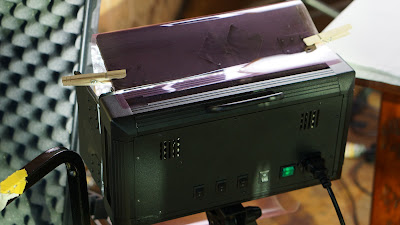 The image directly above shows a 500 bulb, first generation, LED panel pointed directly at the tiled wall that shows directly behind the food. This gives me a consistent color and value to the background. Note the 1/4 value magenta gel filter clamped onto the barn doors of the fixture with clothespins. It matches the color values of the main lights described above. I did not need to diffuse or modify the output of this panel. I judged the needed strength by observing the whole scene from the camera position. A back light can be critical to create lively separation between the front and back of the scene and also serves to add the appearance of depth to a photograph. 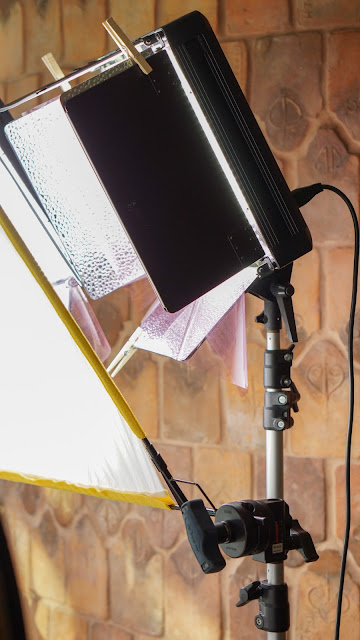 Why use LEDs to do food photography like this? The constant WYSIWYG nature of the light makes the set up and positioning of food much, much easier than the relentless shoot/chimp/shoot/chimp method required by flash while the lack of heat on the food (and on the photographer and crew) trumps the potentially higher output of tungsten lighting.  I've stopped using florescents altogether because the tubes are too fragile for travel (at least the way I do it) and most florescents are harder to color match to daylight.

We worked quickly on this shoot and as soon as we saw what we liked with the stand in plate we had the chef make our hero plate. Careful attention is paid to making sure the food is fresh from the kitchen and plated so that juices from meats or vegetables or sauces doesn't run or pool before we shoot it.

It's important to note that most food photography like this is done to create a mood that subliminally describes both the atmosphere of the restaurant and the visceral pleasure of the food. It's never meant to be an exacting catalog image of the food. The only need for those kinds of images might be for kitchen staff to use in order to understand how each dish should look and how it should be plated. Our job is to make the food look delicious and appealing, not to make it clinically descriptive. If you can see the entire scene in sharp focus instead of having the eye guided by focus and color then you've missed the mark in today's style of food photography presentation.

For this restaurant we shot the food both on a wooden mat (as above) and also on white only. The graphic designer who works on the website will have two options for every dish. This also makes for easier re-use in ads and other applications.

When we photograph food we go in with the idea of pleasuring our visual senses. Everything else is secondary.

People always ask me if we get to eat the food after we shoot it. Answer: We're snacking all the way through. Usually we are just curious to taste the food and see what it's like. We're never really interested in sitting down and making a meal of it. That would interfere with the work. We honor our chef/customers by coming back without our cameras in hand and really experiencing their great food as attentive diners. That's more fun.

If you live in Austin you might want to try the happy hours at Garrido's. Selected appetizers and their amazing street tacos are available at great prices and it's a lovely introduction to their cuisine and atmosphere. It's on my "A" list for good food downtown.