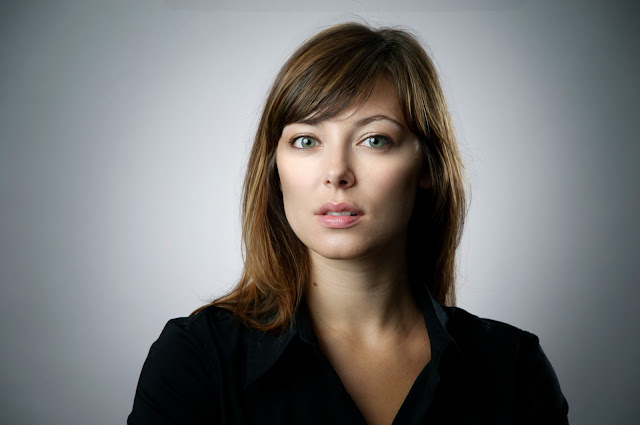 I loved photographing Heidi. She came to my studio at the suggestion of my assistant, Amy. We were doing a book project and we needed a beautiful person to photograph so we could illustrate what I was writing about lighting. I lit her in what I've come to know as "my style" of lighting. It's a really big umbrella (could be a softbox if you prefer) used over to one side and fairly close. The other side gets a black blocking card to control the depth of the shadows. The little glimmer of backlit hits the top of Heidi's check and adds and inference of shaping to that side of her face. The grid spot on the background creates a vignette effect on the background.

We were using an Leaf/Rollei Aptus 7 back in the studio at the time but I found that I preferred a regular Nikon DSLR and a medium telephoto zoom lens instead. The files on the bigger camera might have been easier to work with but the smaller camera was 95% there on the quality and much more fluid with which to work. A variation of the image above appeared in the second book; the one about studio lighting.

I came across this image because I'm preparing to give three day, concentrated workshop on portrait lighting and portrait creation for a private company. I've looked through over 900 digital portraits I've made in the last decade with nearly 40 different digital cameras. My take away? All the files look nearly the same as artifacts because lighting and aesthetic attention trump the somewhat benign differences in cameras. Shop all you want but whatever you shoot with you shoot with your own brain first. Hard to overcome that hurdle, if you consider it to be a hurdle. On the other hand it certainly speaks to a triumph of purpose. Go with your flow and you'll drag whatever camera along with you....

Happy monday. Hope the week treats us all well.

Posted by Kirk, Photographer/Writer at 21:34 2 comments:

The Return of the "Hot" Walk. Burning up with a camera in your hands. 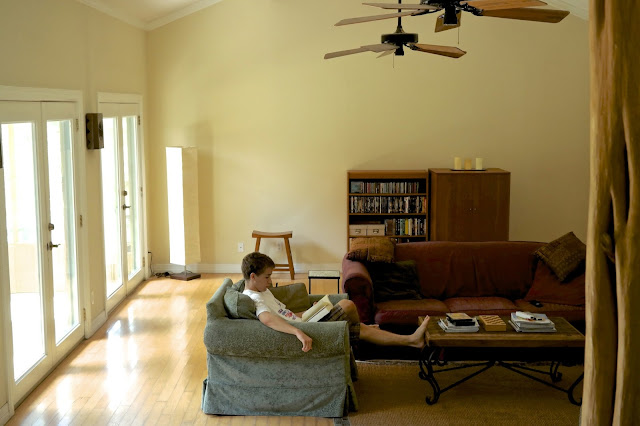 After a fairly mild Spring and a calm Summer yesterday felt like a reprise from the Summer of 2011 when we suffered through 105 straight days of over 100 degrees. Many of the days pegged out over 110. Although we don't hit the desert temperatures we're more like the Houston ship canal in the Summer where the high temperatures are leavened with ample humidity. Yesterday we heard the weather forecast telling us that the high temperature for the day would be around 109 (f) while in the heat sink of downtown we could expect a few degrees more. What a perfect afternoon to take a compact camera out for a walk and see how it would handle outside of its stated operating parameters...

I baselined the test with a shot of Ben sitting, motionless, in a comfortable chair with the ambient interior temperature hoving around 78 degrees. Even at 640 ISO there's little discernible noise. In a nod to the heat I found a light colored and thin ball cap and drank a glass of water before I walked out the door and steered the sprightly studio vehicle toward downtown. I had my trusty NX300, a Hoodman Loupe (I don't care how great your eyes are none of those rear screens is in its element at EV 21...). Ever the Boy Scout I tossed an extra battery in the pocket and tossed on a pair of non-polarized sunglasses.

A moment to discuss sunglasses: Anyone who works outside and anyone who wants to keep their vision intact to their old age should wear good, optically rigorous sunglasses which block both UV and IR energy. Keep those retinas and corneas happy. But....don't go out for your photo walk with a pair of polarized sunglasses because the random interference patterns will obscure parts of the screen, which is also polarized. Also, polarized glasses greatly increased the dark tones in the skies making the clouds stand out dramatically. Unfortunately you won't see the same effect in your camera files unless you put a polarizer on the front of the camera too. I like polarized sunglasses when I drive but not when I shoot. Too much disparity between my human perception and the camera perception. 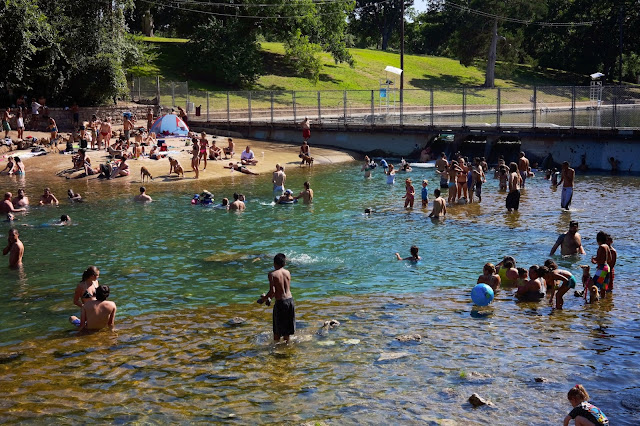 I presumed that the general population of Austin would wither and hide from the heat in cool, little caves, in malls and theaters. Naw. The soccer fields were jammed with people kicking the balls around in the direct sun. Barton Springs and Lady Bird Lake were both filled with splashers and paddle boarders and kayakers and swimmers. No different than a mild day. 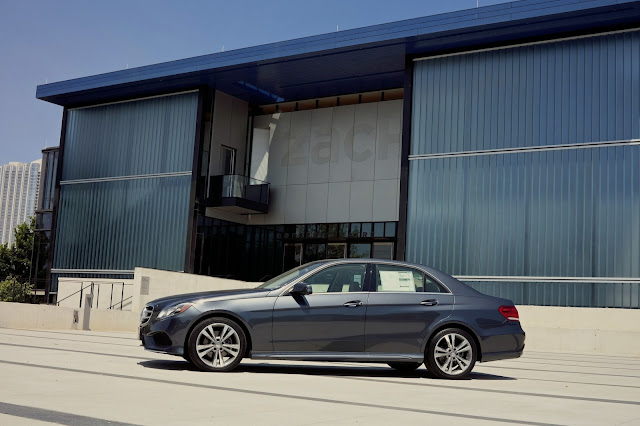 I recently received a 30mm f2, pancake lens for my Samsung NX 300. Their public relations agency sent it out to me and I decided that it would be my only lens for the heat walk. It is nice not to have to make decisions in the heat or to change lenses with sweaty hands.  I put the lens at f7.1  and left it there for the rest of the day. It worked well with one exception: I got a tiny bit of magenta discoloration on one side of the frame. I've had the same problem with wider and legacy lenses on the Sony NEX 7. I saw it mostly on side lit images and it may be the very beginning of flare just jumping in there.

When I walked from Barton Springs to Zachary Scott Theatre and I found this Mercedes sedan parked out on the "quad" in front of the new Topfer theater. Kinda bizarre, like a commercial that doesn't move. Or have sound. I put my knee down on the concrete in anticipation of kneeling to make a low angle shot and I quickly stood up because the surface was burning me. Instead I flipped the screen out, popped the loupe on and shot low that way. No weird magenta cast on this one. When I look at this shot bigger the detail is wonderful, deep and compelling. Even better than the detail I see in files from my 20 megapixel Sony a58. 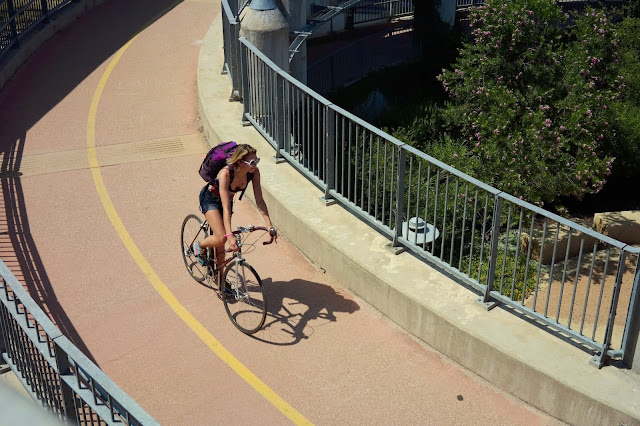 I was amazed at the number of Austin cyclists tooling around in
the downtown heat wave. The heat didn't seem to faze them... 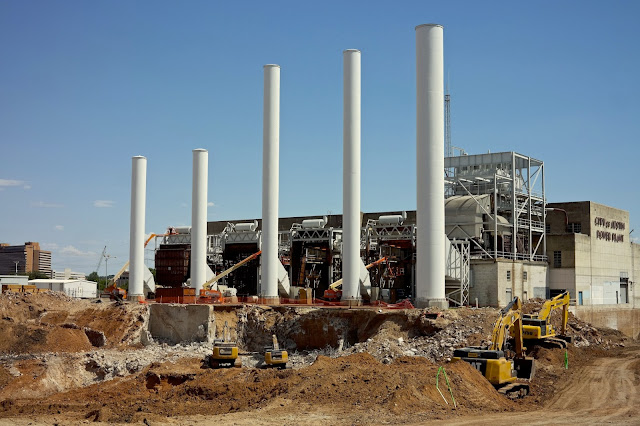 I'm very happy with the focal length of the pancake lens. It's like a 45 or 47mm lens on a full frame camera and that's what I cut my teeth on back when I bought my first cameras. My Canon Canonet sported a 40mm 1.7, my Canon TX came with a 50mm 1.8 lens and my Rolleiflex TLR was in the same ballpark.

This giant pit in front of the old power plant will be the home of Austin's new downtown library. We're collectively going to spend several hundred million dollars to build it and I wonder if someone missed the memo about books becoming digital and almost instantly available...

As I walked from the pedestrian bridge, through the construction alley of new buildings, and over the railroad tracks I turned east toward downtown and wandered past Garrido's and the W Hotel before coming to temporary rest at Caffe Medici. Once refreshed I headed up the street and photographed several buildings, including the Littlefield Building, which, because of the heat, I envisioned in black and white. Or, as my trendy art friends say, "monochrome." 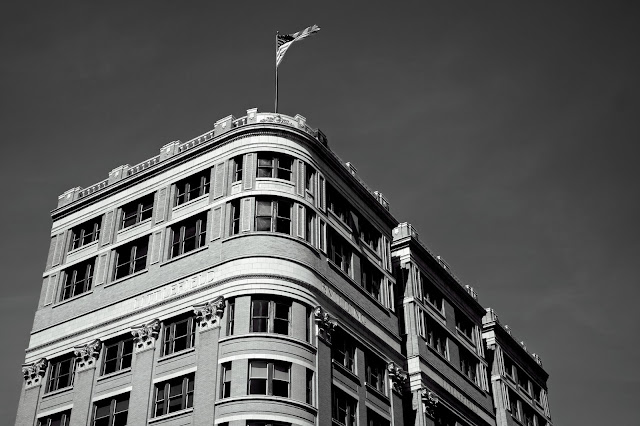 The corner of 6th and Congress Ave.

I've become very agile in using the eyelevel-finderless camera with a big Hoodman Loupe. It makes my process of photography more controlled and more easily reviewed. But I did have an epiphany yesterday ( or heat stroke ). I thought that young people and hipsters used the screens on the backs of their cameras and phones because they didn't understand the advantages of an eye level finder and a diopter optical system for framing and reviewing.  I kinda thought they were... stupid. But I've finally realized that the generation in question are early adopters of what I've been preaching all along: They are choosing live view. They want to see how the image will look as they implement changes, etc. and, since most cut their teeth on cellphone cameras, the back screen was the only option and they became habituated to it.

Not a reason to get rid of the EVF but a defense of that group's disregard for the better method. They were foiled and truncated early on by the dumb optical finders. Funny how heat changes your mind. 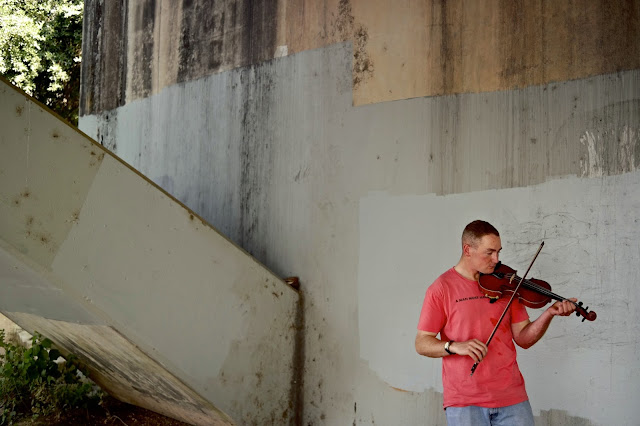 After walking through downtown and dousing my hat from time to time with cool water from one resource or another I set my internal GPS to Whole Foods and spent a few minutes wandering through the meat, seafood and dairy sections of the store where the temperature felt almost arctic. Re-refreshed I took the last lap and headed back over the bridge to regain my car. I intentionally took the hike and bike trail to photograph the reflections of the lake's water on the underside of the old Lamar bridge. It was here that I bumped into the violinist, above. He was playing for a small group of people who'd gathered under the bridge to temporarily escape the heat. It was wonderful and seemed somehow organic in the sense that this is how people lived before the age of air conditioning made us soft and prone to collapsing under even the slightest duress.... 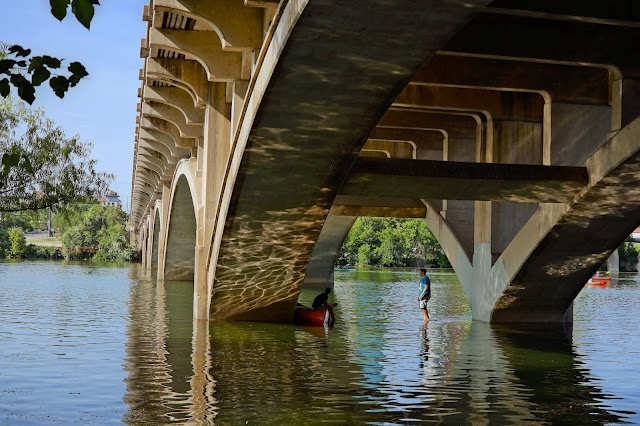 It was a fine walk. It was a long and happy walk. And at the end I felt cool and satisfied and somehow more integrated into the energy of Austin. Home for a lentil, apple and spinach salad and two glasses of a very nice, Argentinian Cabernet Savignon. And a couple glasses of water...

As you can see, the camera performed perfectly. No extra noise from heat. Not like my Kodak DCS 760 which starts to make happy colored sparkles the relative size of marbles whenever the temperature exceeds 104f. Works for me.

Posted by Kirk, Photographer/Writer at 18:18 4 comments: