Two shots from my Sunday walk, juxtaposed for color contrast. 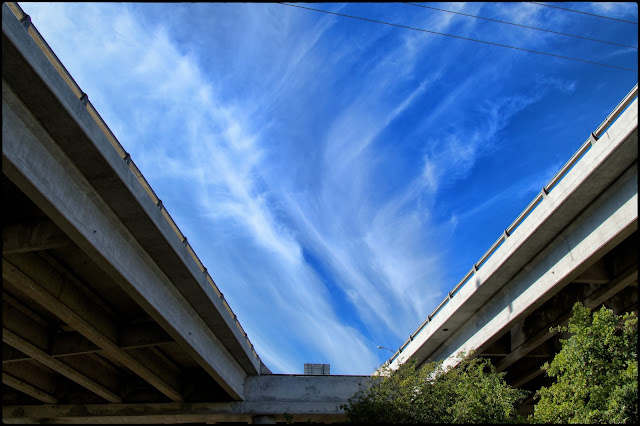 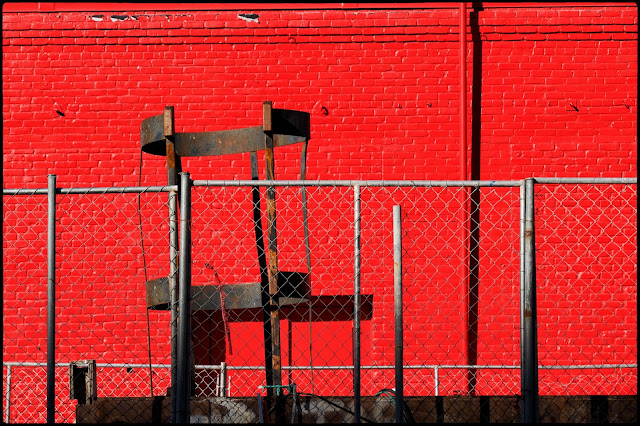 Okay. So in my usual hyperbolic enthusiasm I got carried away with the fz 1000. Then, on corporate shoot I figured out that the camera does have a few limitations. But then I picked it up today and realized that it's still as fun to shoot as I first imagined. It can be wickedly sharp and at the same time subversively understated.

I have been using it as a single focal length camera. Let me explain. There's a setting in the menu that allows you to set the camera's zooming mechanism to stop at each marked focal length. Additionally you can program the camera to return to the last zoomed focal length when you turn it on. I can set the camera at a 50mm equivalent, turn the power off, and then five minutes or five hours later, come back and turn the camera on and it will go straight to 50mm. Or whatever you last shot.

I like all this and think it's very cool.  I have also turned the LCD finder around to face the body so I don't both pre-chimp and post chimp. That's a time and attention saver, to be sure.

The camera shoots a bit flash and a bit low on saturation. I like to think it's doing some fancy and very beneficial S-Log thing like the S-Log my video friends rave about in their professional video cameras. Whatever the reality is a few minutes of play in SnapSeed and I end up with files that I love. And files that look like they have significant dynamic range.

I might have mentioned that I initially liked the fz 1000 so much I bought a second one. Now I'm glad I did because I'm going to pack it for a road trip and its twin IS the perfect backup.


Posted by Kirk, Photographer/Writer at 21:25 4 comments:

And here we are again, packing for tomorrow's shoot. It's all about lighting again. 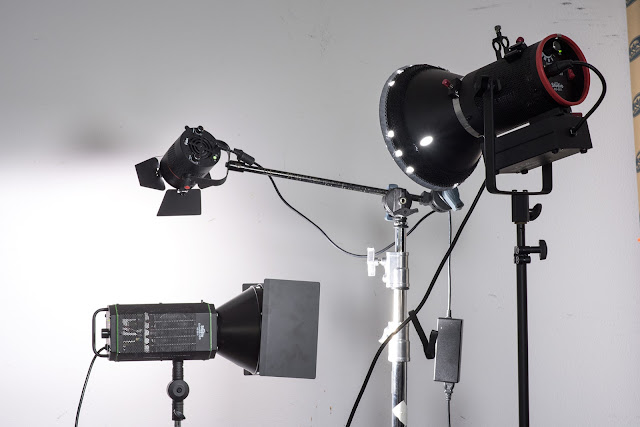 Tomorrow is a continuation of a project I started for a downtown law firm about a month ago. We are photographing all of the partners and associates, and so far we've gotten through about 24 people. Midday tomorrow we'll set up in two locations and photograph 4 more people. I'm doing a style that depends on shallow depth of field and I'll be leveraging the ambient light in the location along with my main and fill lights which will set the lighting style, and the balance, all the other sources. I'll be using black flags to block ugly light from compact fluorescents shining down from the ceiling, and I'll be counting on lots of clean, cool daylight flooding in from floor to ceiling windows, bouncing through frosted glass walls and helping me to add depth to each shot.

On our first shoot, last month, we used three different LED lights for most of the illumination. The larger light in the bottom left corner of the image above is a RPS CoolED 100. It's pretty bright and the light is very well color balanced when compared to daylight. I'd peg it at 5400 with a very, very slight green cast. The light in the top right corner, closest to camera, is the younger brother of the CoolED 100; it's the CoolED 50 and, wouldn't you know it, it half the power or one stop less than its big brother.

The third light, which gets used a lot as an accent or hair or background light, is the Fiilex P360 which is an absolutely darling little light. Where the two RPS lights are just daylight balanced the Fiilex allows me to control the color temperature from 2900 to 5500, steplessly.

My only concern in the last shoot was not having enough power to shoot toward a window. I was about a stop down from the outdoor light with my main light used through my standard diffusion scrim. Since then I bought a second 100 light and will gang them together when I need the extra oomph! I also want to use the two bigger lights together so I can add a second layer of diffusion (separated by about 1/4" from each other) to smooth out the light even more.

To people who always shoot with flash the fascination with continuous light sources must seem a bit crazy. I always remember though, an interview I read a long time ago with Arnold Newman (who used lots and lots of hot lights over the years), he suggested that having people sit for portraits, done with hot lights, sometimes demanded that they stay very still for up to a full second. He conjectured that the very act of breathing at these longer exposures added something ephemeral to the look of the sitters; a softness within the sharpness that made the faces and the surfaces seem more real.

It is interesting to look closely at his image of Igor Stravinsky at the Piano, which was done with a single 1000W light. The exposure is something like f16 at 1 second but the overall image is something so different from what we see in the results of most portrait lighting today.

I firmly believe that the immediacy of feedback one gets from continuous lighting allows many very positive benefits for photographers; not least of which is being able to see IN REAL TIME the exact effect that blending different light sources has on the image. The blending of light sources is also much easier to effect since you can see the effect on the tonal balances as you turn each light up or down.

I'll be photographing again with the D750 and either the 85mm f1.8 G lens or the older, 105mm f2.5 ais lens. I set the aperture I want for the depth of field I want and then I set the shutter speed to give me the correct exposure. I start out with the lowest ISO I feel I can get away with (camera and subject movement limits) and, if I start getting down to 1/30th of s second I stop there and start raising the ISO until it's all dialed in. I know with the 105mm's aperture set at f4.0 the lens is just about as perfect a lens as one could hope for in the 5 to 10 foot range; if one is framing a horizontal with the subject cropped from just above the top of the head to a bit above the waist.

My goal with these portraits is to make them look great as horizontal compositions but also have enough "air" around them so that art directors and website designers can also crop a really good vertical from the same selected files.

Working with continuous lighting is more like lighting a movie set than traditional softbox/flash portrait photography. I use tools like 4x4 foot diffusion scrims, nets -- which pull down light levels without introducing shadows or shadow edges, and a host of light blockers to control what hits the subject and what doesn't. That control, along with total control of depth of field, makes the projects seem more cinematic; almost like scenes from movies frozen into single frames.

The bottom line is that the light is just an element of the portrait mix. The photographer will have to make so many other decisions. The distance from the subject to the camera is determined by how large you would like to have the subject appear in the final image. That also depends on the focal length of the lens. But an aesthetic consideration is also how far do you want the subject to be from the background. Too far from the background and you risk losing any detail in the far image plane, and that means you risk losing the feeling of real depth. Too close to the background and you risk objects coming too much into focus which ultimately robs some of the viewer's attention from your main subject. It gives viewer too many spots on which to linger.

But all of those considerations are meaningless if you can't work with the subject to get to a collaboration in which they are comfortable giving you an expression and the energy that their friends and families will recognize as "genuine" and "engaging." Get all the other stuff right and then flub this and you've failed. Getting a priceless expression while not getting the technical stuff perfect isn't nearly as bad. You can cover up a lot of shooting incompetence with a bunch of PhotoShop skill. Get both sides of the equation  right and you might just be able to earn a living doing portraits. Even in 2015.

I'm loving the LED lights again. This time around I have the tonal control AND perfect color right out of the box. I can hardly wait to drag my cart, overloaded with gear, into the service elevator and get started. 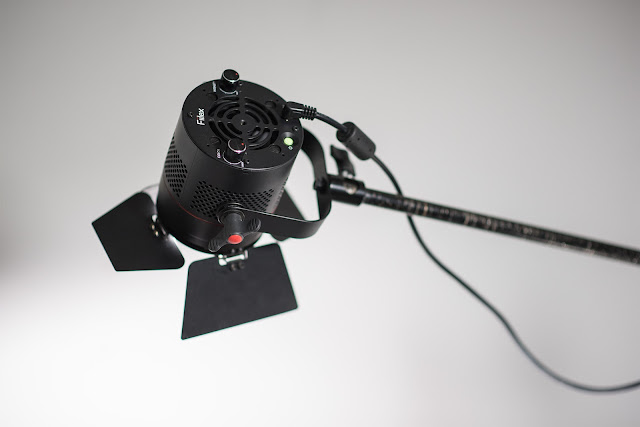