Several things I did last night that made my video much, much better. And nicer to watch. 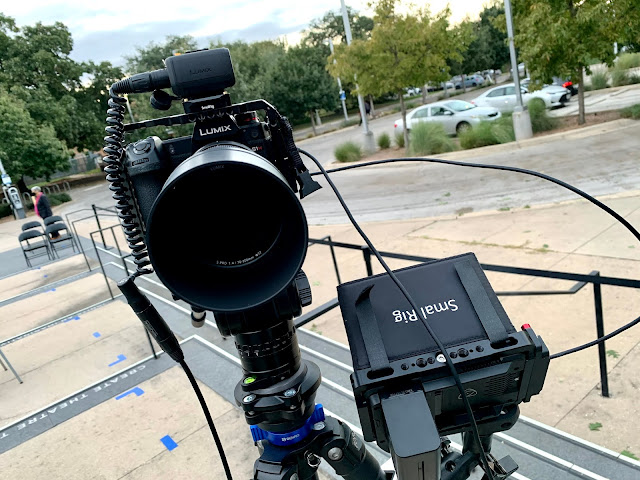 If you read the manual hard enough you can actually learn stuff with benefits. And if you pay attention to physics you can be steadier as well.

We've been shooting live, outdoor concerts for Zach Theatre. Last week was our first foray into doing a three camera show documentation and while the client was pleased I saw lots and lots of room for technical improvements with our long lens, follow camera. The one from which we'll pull 85-90% of the imagery.

I won't get too far in the weeds but I'll admit some humbling observations.

First off, last week I used my Atomos Ninja V monitor on top of the camera cage which put the center of gravity for everything sitting on top of the tripod head much further up than it could have been. With that much weight sitting up so high it accentuated every vibration from touching the camera or lens (and it hurt to crane my neck up to look at the monitor for an hour and a half).

The biggest issues came when I needed to loosen the tilt control to tilt up or down when compensating for a performer changing position. The top heavy camera and monitor would answer the calls of gravity quickly and gracelessly and I wasn't always able to adequately dampen the movements. Partially, this was because the load on the head was poorly balanced but mostly because the monitor and its battery became a long lever for the forces of physics to exert themselves.

I started over from scratch this week and my first step was to put the video tripod head on the biggest, heaviest and strongest tripod I own. The second thing I did was to move the monitor from the top of the cage off the tripod head assemblage altogether. I used a clamp and a stand adapter to attach the monitor to one of the tripod legs so I could operate the touch screen without any vibration to the camera rig. That was a major good move in the right direction. It was also much more comfortable to look at.

Next I gave very close attention to balancing the camera and lens on the tripod head. I moved the tripod mount on the lens forward and backward in the quick release until I hit a neutral point where the whole set-up would balance without me having to lock down the tilt controls. To say it made a big improvement over an hour and a half of hands-on operation is a profound understatement.

Next I fixed a major issue with focusing. I was so impressed that my L series S-Pro lens have a clutch that allows manual focusing with hard stops at both infinity and the close focus point that I felt compelled on the previous week to use them. But that was just stupid. It would have been great if I was looking for rehearsed repeatability but the manual focusing rings is non-linear and has a relatively short throw. That meant that fine focusing the lens when used wide open and racked all the way out to 300mm (APS-C mode) was a nightmare. The short throw made it almost impossible to nail very specific point. I had to rack the focusing ring back and forth to get an exact and satisfying fine focus point. The barest touch would put you in front or behind the point of highest sharpness. It was a frustrating evening.

I could see the focus point go in and out on the monitor. It was very obvious where the focus "should" have been but the short throw just made the process endlessly glitchy.

A more thorough study of the S1H camera manual reminded me that all of the S1 cameras allow one to choose how they want the electronic focusing ring to work (not the manual ring!). You can choose between a linear or a non-linear focus throw and you definitely want a linear throw for video! Then you can select how many degrees of rotation you'd like between the closest focusing of the lens and the infinity focus. 90° is too short. Even 180° feels short with a long lens. I settled in at 270 degrees ant this generous amount of throw gave me much more controllable discrimination in focusing. Things didn't "jump" into sharp focus, instead you could see a long smooth transition into sharp focus. It made hitting the mark so much easier and the technique so much less obvious to any audience. It felt like you were given 10 times the control of the manual focusing process. And it was all right there in the camera.

Finally, with a bright set of stage lights and a very dark background it's not always obvious how to set exposure. Waveforms are great on controlled shoots but when people are moving in an out of lights it's great to have a different method of figuring out if you have faces exposed correctly. I started using "false color" on the shoot last night. Each tonality on a scale is given a different color. On the Atomos monitors average flesh tones/skin values fall into a green color. This is something you can see in real time if you are referencing an external monitor.

Last night was a bit of a triumph for me. I conquered my long lens focus glitches (while shooting video) and took 99% of the camera bounciness out of the shoot. My exposures were tighter and more accurate. In all, I count a week's worth of study and trial and error to be successful.

Some of you seasoned video pros are probably chuckling at this having long ago conquered most of these impediments to good production. But I would counter that, at least, I have the thrill of learning it all for the first time.

so, how did the cameras perform? All three of the cameras (S1H, S1 and GH5) ran without any issues or glitches. No thermal warnings. No dropped frames. All were running in 4K, 10 bit, 4:2:2, Long Gop. All ran for an hour and fifteen minutes. While I didn't bother to check the GH5 I did notice that both of the S1 series cameras had over 50% battery power left at the end of the long session. It was interesting since the S1 had image stabilization turned off while the S1H has I.S. turned on. The battery life at the end point was indentical. I guess I.S. on a tripod isn't as much of a "battery suck" as I imagined.

I just finished transferring files to my hard drives and the made a copy on a third HD to deliver to the client. 300+ Gigabytes of content seems like a good night's work. And, bonus! I don't have to edit it. 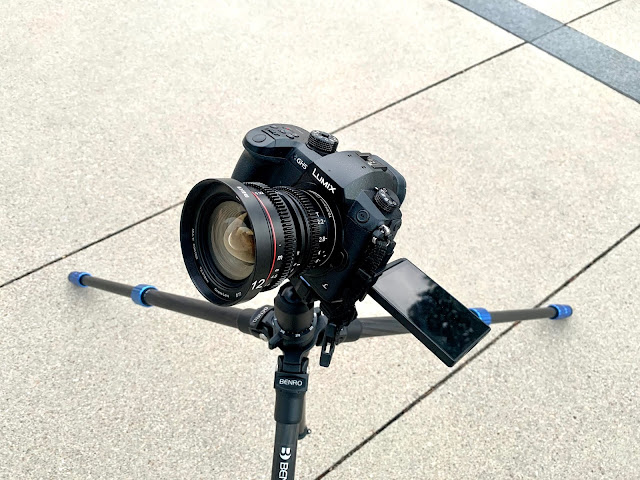 the GH5. Last night's "set it and forget it" champion.
That's the Meike 12mm lens on the front.

Posted by Kirk, Photographer/Writer at 12:37 6 comments: