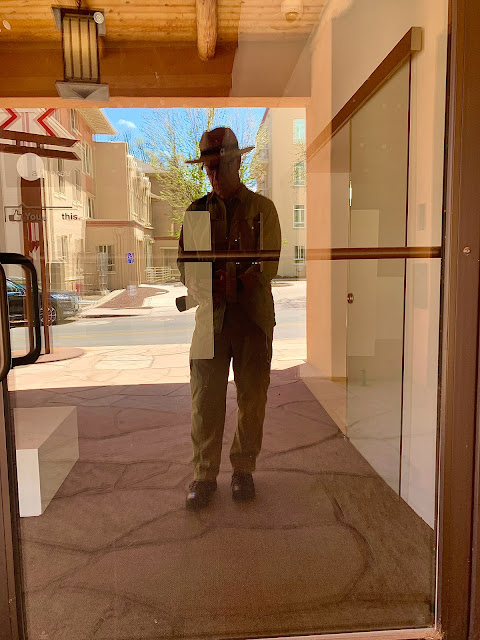 You'll not be out of place in Santa Fe with a wide brim hat.
And if you are 66 you'll probably be one of the youngest visitors
they've had in a while.
Just for the record I walked around diligently over the course of four days and
saw only TWO people with actual cameras. The paucity of
actual cameras was notable. Phones? Yes.
DSLRs or Mirrorless cameras. Not so much.
It was a long drive from Lubbock to Austin. I won't talk myself into doing a trip like that by car again until far in the future when my memory becomes faulty. It was a mistake to drive to Santa Fe. It wasn't a mistake to go to Santa Fe....just the driving part. There's nothing particularly redeeming about six hours a day of mindless driving through a flat, brownish, endless space. Sorry. No glamor there.

I found little that would encourage me to return to Lubbock any time soon either. I did score three pairs of discounted trousers from one of my favorite brands, English Laundry. They always seem to fit just right. I could order them from Amazon for around $49 but it doesn't make sense when you can source them at Costco for $15 (an instant discount from the normal Costco price of $19). I also got to look around at a 5.11 store. Don't know about 5.11? It's for folks who want to play at being soldiers by dressing in rugged looking clothes and carrying heavy backpacks with built in holsters for your concealed weaponry. Didn't see anything I needed and they didn't have a bag big enough for my 50 caliber Barret M82 sniper rifle so why bother?

If you are really looking for a bargain then it's back to Costco for the footlong hotdog with a soft drink for $1.50 USD. Or the $3.55 per gallon gas. Sorry...couldn't find the tactical hotdogs.

I almost hesitate to write this next part about my trip. It will probably make me sound dumb. Or clueless. Or whatever. But I'm going to do it anyway.

Compared to shooting with my new GH6 or my year old Panasonic S5 my Leica SL2 just plain sucked for walking around Santa Fe. I've pulled some nice images out of the big, now $7,000 Leica body but in nearly every instance those were done under controlled circumstances or with my own style of lighting. I brought along the Leica SL2 and a bag full of the Sigma Contemporary lenses with the thought that I'd shoot that system when I wasn't on the corporate clock. A way of making a demarcation between work and play.

First of all I seem to have lost much of my long time preference for prime lenses. Or what might be better classified as "single focal length" lenses. If I had on the 24mm I found myself wishing it was the 65mm. But when I took the 65mm out of a walk I seemed only to discover potential images that would have been rendered perfectly with something like a 35mm lens. And after years of walking around with only one lens and one camera I was not about to lug around a Domke bag filled with various focal lengths. I was working hard enough already.

In comparison to the other cameras I brought the SL2 seemed ponderous and slow. And even though the finder is supposed to be much better than the EVFs in the other cameras it seemed.....vague to me on this trip.

This might just be sour grapes because I packed too much and complicated my photo life with too many disparate choices on this trip. Between the two m4:3 bodies, the S5, the SL2 and ten different lenses it's a wonder I could keep anything straight much less focus on fine-tuning technique while bouncing back and forth between cameras.

The S5 was far and away my favorite work camera and the lens choice there was right on the nose. But my favorite "walking around" set up was the GH6 paired with the new Olympus 12-45mm lens. A 24mm to 90mm full frame equivalent angle of view range. The lens is sharp and the camera does really nice colors.

I'll put the SL2 to better use on Tuesday. I'm booked to photograph two attorneys on location. Camera on a tripod, lights at hand. I'm guessing it's much closer to the optimum use profile for that camera. Lots of detail and lots and lots of dynamic range but more methodical. More attention to each step.

It's been a banner month around here for the m4:3rd cameras. I've really enjoyed using both of them. Might need just one more lens....

health note: I mentioned a blood oxygen reading from my Apple Watch on Friday afternoon that was pretty low. It was 92. Several people suggested I take a Covid test. I took two and both were negative. I've been closely monitoring during the past two days and after that one reading all the rest have been 96 or higher, even at altitude. I called my concierge doc and ran all this by him as well. He suggested that the combination of bad air quality, altitude and the same kind of work schedule I adhere to here in Austin were probably to blame. Since Friday and since coming down from the upper reaches most of my readings are in the 98 and 99 zone. Maybe with a good night's sleep here at HQ, aided along by a nice glass of Stag's Leap Cab I'll be back at 100% tomorrow. I'm fine.

And...not to worry. I am my favorite hypochondriac. I head in to see my physician at the drop of a hat. Sometimes it's a contest to see which one of us can discover something first. I beat him to the punch with the squamous cancer imbroglio....

Posted by Kirk, Photographer/Writer at 19:01 18 comments: