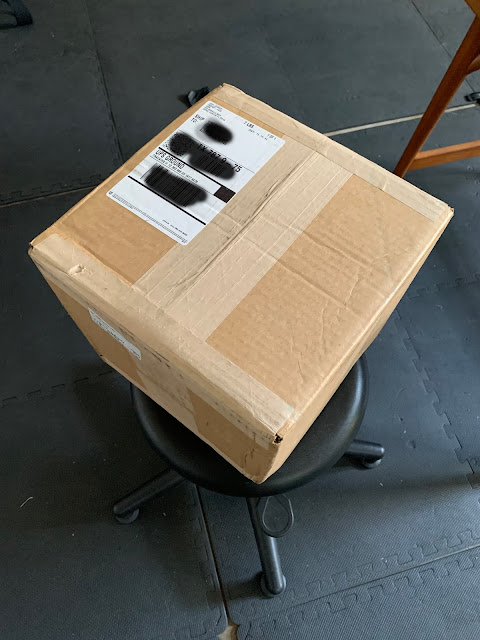 This is the second Leica CL camera that I have purchased from the Leica Store Miami. The cameras they've sent me so far exceeded my expectations for condition on each transaction.  Both cameras came impeccably packaged. I've blacked out the bar codes and addresses on the outer to preserve what little privacy I have left on the web. Disclaimer: I pay full price for the cameras and have no affiliation (other than admiration for their business model) with the store.
The box was stout and well taped at every spot and juncture. I wish every other vendor could learn to pack as well... 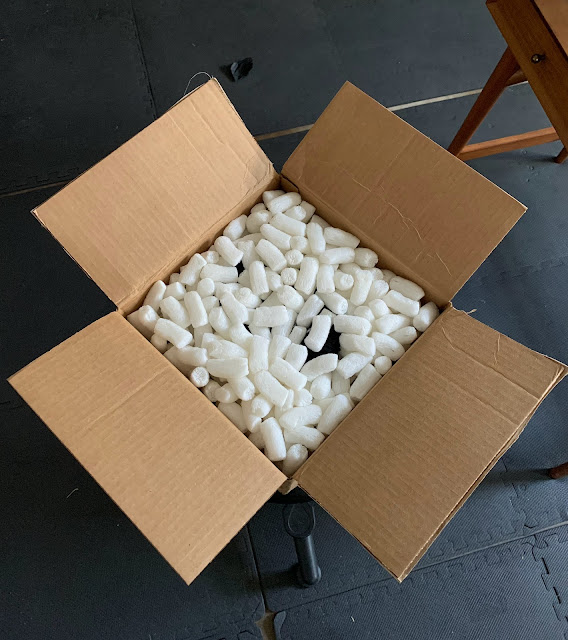 The styrofoam noodles aren't just tossed on top of the box situated inside. In fact, it seems as though LSM has perfected some technique by which the noodles are equally distributed on every side of the internal boxes which is obviously better protection than just tossing a handful of cushioning in at random. I've had delicate stuff shipped to me by other vendors where the product is lodged directly against two sides of a box and it seemed as though the styro-peanuts were casually tossed in on another side as packaging theater of the worst kind. 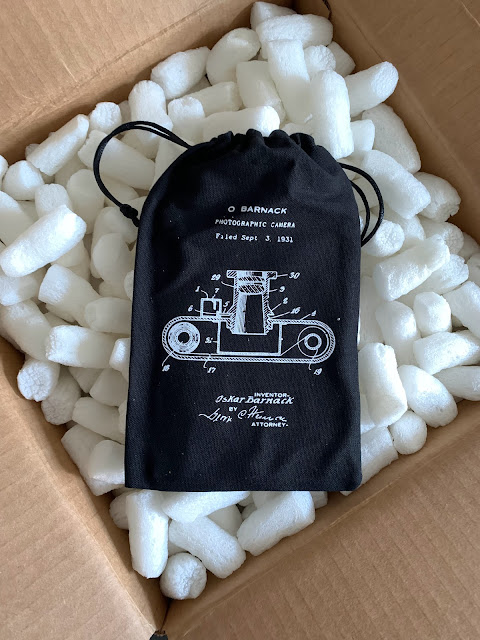 Just under the top layer of styrofoam-noodles there is a black, cloth bag with drawstrings and a white line rendering of the Barnack original Leica camera technical drawing on it. Inside the bag is the printed receipt for the camera and a small assortment of Leica themed postcards. It's a wonderful way to envelope something as banal as a sales bill. 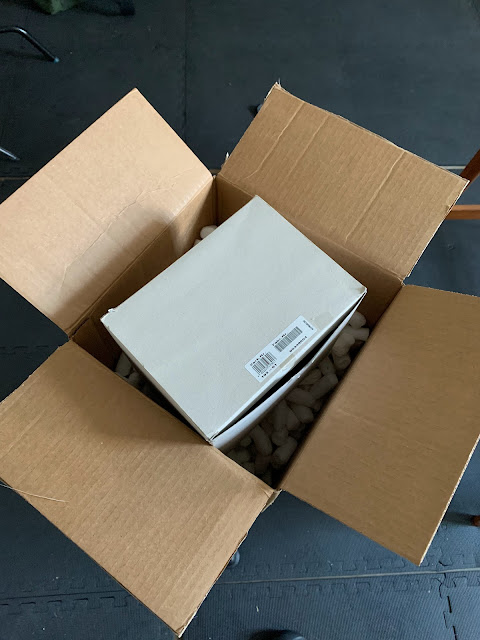 In the nest of styro-noodles there is a plain, cardboard box which serves to protect the inner product box from abrasion and handling. 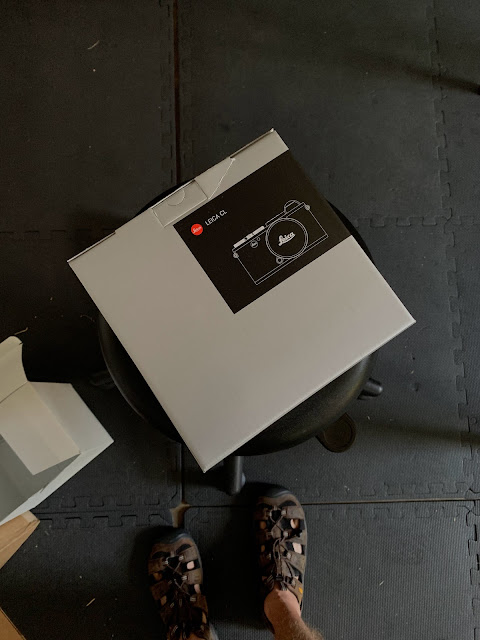 Inside the plain cardboard box is the actual Leica product box and it's very big considering how small the actual camera body is. Sorry that this image is a bit dark. It was shot with another camera maker's camera... kidding, just kidding... 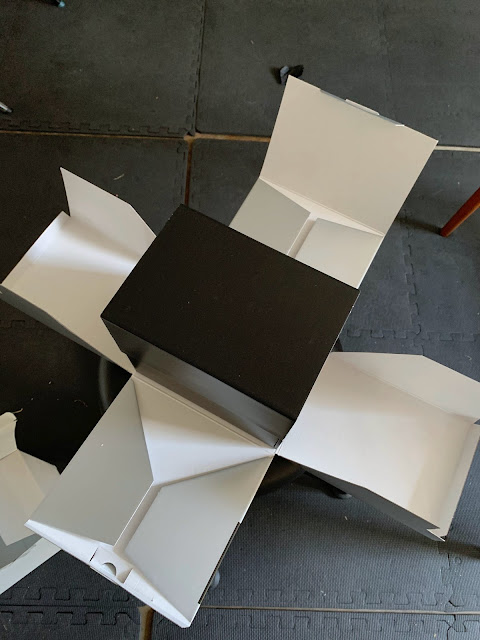 The silver outer box opens up to reveal a black box which contains all the pieces associated with the camera. But each group of parts has a "drawer" within the black box to keep everything neat and tidy. 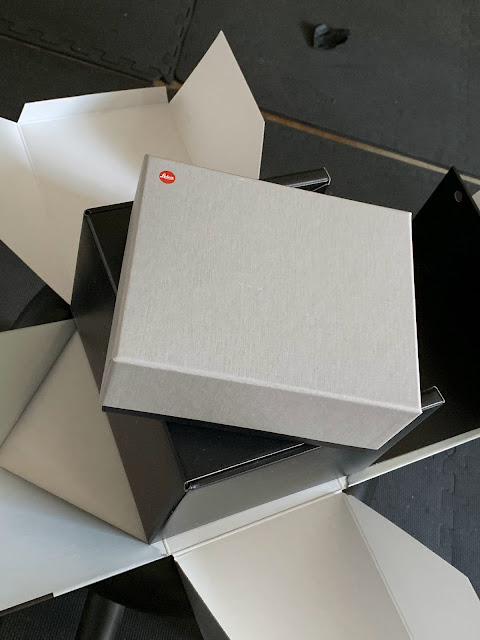 I pulled the box just above out of the top drawer of the black box/assembly and it contained the actual camera body nestled securely in protective high density foam. Considering all the layers of protection I would be amazed at just how destructive a shipper would have to be to break one of these cameras in transit. I guess you could cause some damage if you were to toss it out of an airplane at 30,000 feet... 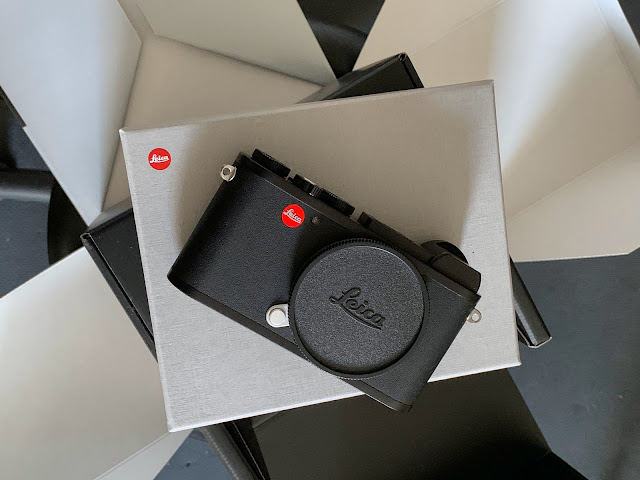 And just above the camera is revealed. I looked over every square inch and I have to say that this one appears just as a new one in an previously unopened box might. To add to that feeling the folks at Leica Store Miami wipe the previous user's info out of the camera memory, update the firmware to the most current rev. and deliver a camera that plays the original greeting screen and requires me to set the date, time and zone.
The team in Miami go out of their way to make the purchase of even an older, retired camera model that was never the flagship of the maker, feel very special and very valuable. It's so rare to find this level of attention to both packaging and to describing the camera in our pre-purchase discussion. Wow!
Another nice thing is the e-mailed notices that come at every juncture. Confirmation of shipping. Confirmation of UPS transfers. Confirmation of "out for delivery" along with an accurate estimation of the delivery window. And a delivery confirmation e-mail that came minutes after I accepted the package from the UPS driver. At every step of the way I've been so impressed by their service. Perhaps that's why this was the fifth time I've bought a used Leica camera from these guys in a little more than a year.
I've put the original strap on, put in a freshly charged battery, put the shipped battery on the charger, formatted an SD card and run through the menus. We're good to go here. And I'm happy. 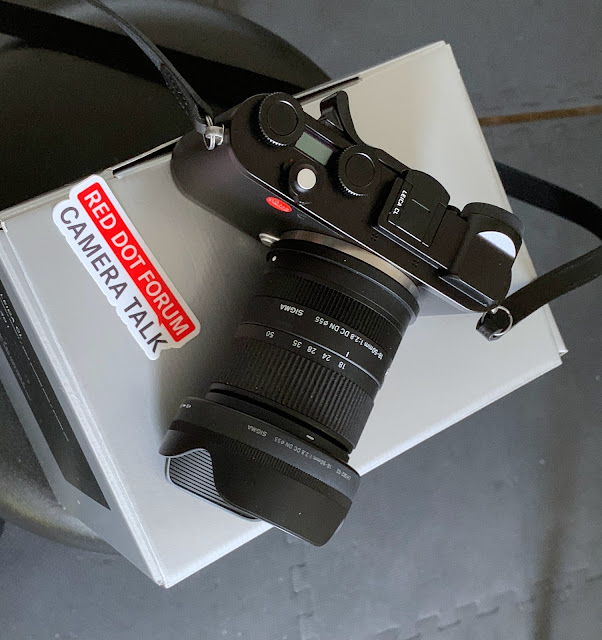 Of course no one "needs" a second CL. For that matter, given the state of the industry and the economy, no one needs much more than a good phone to do current photo business. But it's fun and nice and I'll take my small system with me when I want to travel light but still be able to charge people for the work.
Most photo enthusiasts or pros won't care much about the packaging and services offered by the Leica Store Miami unless they are interested already in Leica cameras and products. Why? Because that's the only kind of camera their store sells. You can't get a Sony there. You can't even get a Panasonic there. But if you want great information about Leica and then great service during a purchase I can't imagine a better photo/retail experience via long distance. Just amazing.
Thanks to David and Josh.
Posted by Kirk, Photographer/Writer at 17:35

Because there are no longer any Leica dealers in the fly-over country that is Colorado, it is my dealer of choice.

There is a Leica dealer in Austin and I did buy my new SL2 from them but they don't get very much Leica trade-in and don't have the meticulous approach to vetting used cameras that Leica Store Miami appears to. So....I don't know if central Texas is considered "fly over" country but there it is.

Currently my local Leica dealer stocks and has displays of the SL2, the SL2-S, the Q2 and the M10. Not sure about the M11 as I wasn't looking for one last time I was in...

I finally broke down and ordered a CL from the Leica Store Miami, Kirk. It was nice that they gave me a phone call to see if I had any questions before shipping. The camera even still has a Leica warranty until late 2023. It should arrive in a few days. I opted not to buy the Leica 18mm f/2.8 pancake that is often paired with the CL - even though it looks great on that body. I'm sure my Sigma 24mm f/3.5 will be my go-to lens for a while. Perhaps I'll add the Sigma 18-50mm f/2.8 zoom later. You seem to be pleased with yours. Cheap and cheerful TTArtisan manual focus glass is always an option, too.

Hi Biro, The 24mm Sigma is a great match. I really enjoy using mine and the files look super.

Good luck with your new camera!

It's hard to believe, but I received my used/new to me CL from Leica Los Angles on June 30th as well. They said it was mint+ but it looks new. It even has the hot shoe cover. It looks like it's never been touched. I had to run through the menu to set it up as well. Then I installed a fresh battery, formatted a new SD card attached a Sigma 45 f2.8 and off I went.

I must say it's a very sweet camera, and goes hand in hand with my FP.

Hi Roger, Congratulations on your newest acquisition. I still use the FP as well but I love the size and the fit of the CL for mobile photography. It's a good package to bring with me anywhere and the files are lovely.

You can update any L mount lens with your CL you just need to download the latest firmware, attach the lens and turn on the camera. It should alert you to the fact that it's updating and ask you to wait. It goes quick.

Have a blast shooting with it.