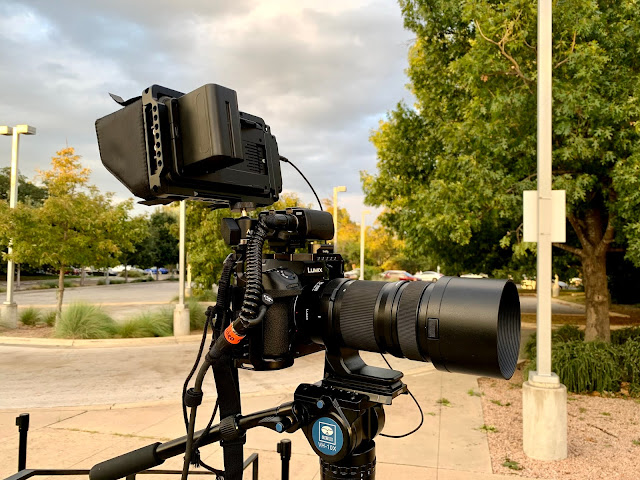 I'm always hopeful that we'll get an evening where the temperatures drop into the high 50's and we feel as though a nice, light jacket would be welcome. Instead it was a typical Austin October evening with temps touching 80 and lots of humidity in the air. Better though than our recent theater videography sessions in 105 degrees.

I had a really good idea of what the shooting conditions (lighting, sight lines) at the plaza would be like since we photographed the same show there just this past Wednesday. The concert, with two singers and a three person band, started at 7:30 pm so the sun had fully set. The production folks built a stage just outside the front doors of the main theater but after a few rehearsals they decided to have the performers spend parts of the show out on an elevated walkway in front of the audience; just to add some motion and change to the hour long show. It was a good call for the audience but it meant we would need three video cameras to do an acceptable documentation of the show. We needed at least two views on each stage for editing purposes.

I arrived at 6 pm so I could set up the three cameras while it was still light enough to see. My main camera looked like some sort of "Rube Goldberg" science experiment. We had the DMW audio interface in the hot shoe with a big XLR cable running into socket #1 from the sound board that our engineer was overseeing, about 50 feet from my camera location. Just to the right of the audio interface my Atomos Ninja V was attached to the SmallRig cage. On the other side of the camera I had a headphone cable out, a full size HDMI cable from the Ninja running in, and a USB-C cable for quickly attaching a power bank (just in case) plugged in and ready. The power bank hung just below the camera in case our camera battery ran unexpectedly dry.

All of this sat on top of the new Sirui fluid tripod head. It's a nice head and very smooth but I think my rig was too heavy and totally out of balance. Next week I think I'll rig the Atomos to a tripod leg to take the weight off the top of the camera. I'll also do a better job balancing the weight forward and backward. The 70-200mm f4.0 weighs a lot. I can't imagine trying to balance the whole collection with the f2.8 version mounted on the camera.....

I had the camera set up to shoot 4K in the APS-C crop configuration. It's nice and crisp and turns the long end of the lens into a 300mm with no hit to the aperture. But a long lens, used wide open on moving subjects is very dependent on having that Atomos monitor fired up and working. It's impossible to really tell, by looking at the rear screen of the camera, when you have achieved really sharp focus. Maybe it's my old eyes but that last bit of tweak that provides the real "bite" in a well focused image is beyond my abilities without the aid of some screen tech.

The Atomos screen is bigger and brighter to begin with. That helps. But while you can't use image magnification while recording on the camera you have no such limitation with the external monitor. I could punch in to 1:1 or even 2:1 to see very clearly exactly where the plane of sharp focus should be. And I could fix focusing errors while watching the enlarged screen while the whole time keeping the full frame on the camera's rear screen for composition/framing. The long lens, follow camera footage would be a mess if not for the Ninja V monitor. Truly a lifesaver. I've even started using the monitor routinely in the studio. It's a pleasant way to work with manually focused lenses.

At this point I should mention that I tested out the autofocus with video at the long end of the lens and it's just too hit-and-miss. At least with manual focus once you are well focused and the actors are in a certain spot for a whole song there's none of the hunting that even the best systems are plagued with from time to time.

I monitored the audio coming off the sound board with headphones. We nailed the levels during rehearsal and the audio is flawless on the main camera.There's just scratch audio on the two stationary wide cameras. 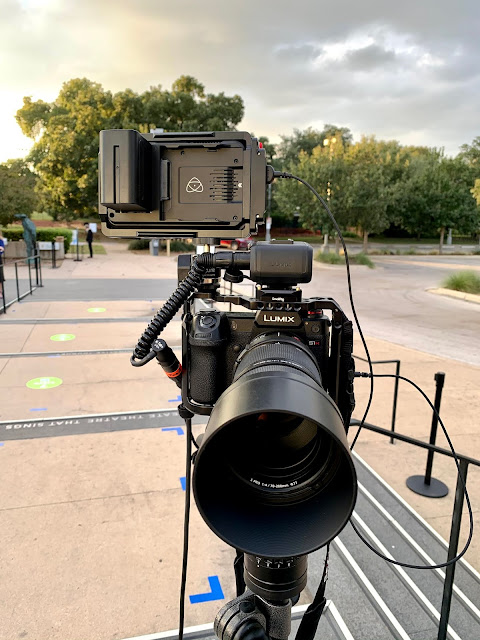 My biggest issue last night was just the fatigue of having to pay attention for an hour and fifteen minutes to every movement and every nuance of tripod management. How far to lock down the tilt. How much resistance was just right in the pan control. How to smoothly disengage the tilt lock to start a new move. And I made the mistake of wearing a pair of dress shoes I found in my closet. They looked so good but they obviously weren't engineered to be comfortable for hours of standing in one place...

There's not much to say about the second two cameras. I had an S1 set up to cover the front stage from side to side and then a GH5 to cover the secondary "stage." Someone asked earlier about the run time of the S1 camera in 4K thinking that it was 29.9 minutes but with the V-Log upgrade package from Panasonic for that camera you now get unlimited record times. Well, at least until the memory card runs out. You can attach a battery bank and charge while shooting so the battery isn't an issue.

And these cameras are actually "Pro" cameras. Unlike the Canons and Sonys none of the four models of cameras we've used from Panasonic over the last two months has ever overheated. Never shown an overheat warning. Barely gotten warm to the touch. And we're not out shooting these in a Canadian snow storm, they work well right up to the 105 degree zone, and beyond. I'll gladly trade off small advantages in continuous AF for robust and bulletproof operational performance. Any Day.

The third camera was the GH5 I purchased a few weeks ago. I put a Meike 25mm cine lens on it and set it up on a small tripod covering the "live" space on the secondary stage. This camera was also shooting 4K and ran for an hour and fifteen minutes, ending up with at least 50% battery power left over. No drama, no acting out. Just a good, solid working camera. Why oh why did I ever sell off the first batch?

All the of the cameras were loaded for bear when it came to memory. I had twin/matched 128 GB, V90 UHS-II cards in the GH5 and the S1H (both have two slots, both of which accept SD cards) while in the S1 I had a 128GB Sony CFexpress card backed up by a 128 GB V90 SD card. All the cameras were set for relay recording to the cards, just in case the show went long. I should not have worried, the show timed out with enough space left over on the cards for another 30 or 40 minutes of run time.

A while back I donated a Panasonic FZ2500 to the theater for day-to-day captures and quick interviews for the web. One of staff (Joshua; who has the task of editing all of this footage together...) used that camera to sweep up a bunch of b-roll while I was shooting the main stages. He got crowd shots, reaction shots, gear shots and wild side angles. Yes. I know. There can never be too much b-roll.

We have three more weeks of shows. Each week features a new set of performers singing totally different shows. We'll be there to document each one of the shows. So, at least I know what I'll be doing (and how I'll do it) for the next three Saturdays. And unlike recent donations they theatre is actually paying me for these.

It's fun to problem solve so many different kinds of projects. From small and intimate to big and boisterous. It's also nice to have cameras in my hands for so long and so often. It gives you a feeling of being totally conversant and comfortable with your equipment. That makes every move and every decision a bit more fluid. It's a great way to learn the ins and outs of a camera system. Everyone should try it. Before they review their first camera....

Hope your weekend was fun and comfy. More to come. 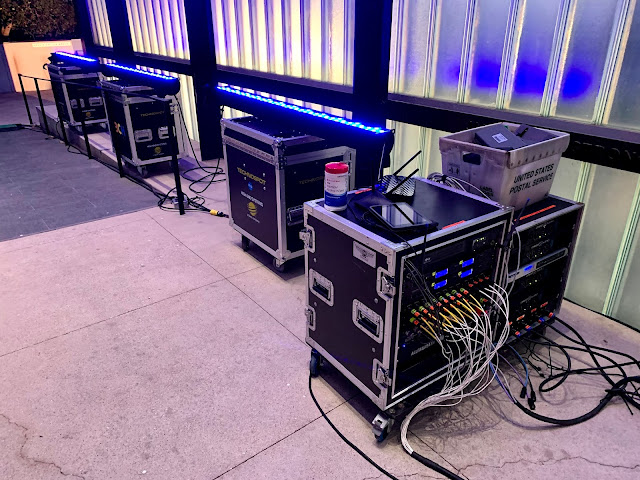 Posted by Kirk, Photographer/Writer at 10:15 6 comments: