The Weekend Walk. A Chance to Look at Stuff and a Chance to Get Re-Acquainted with an "Old Friend." 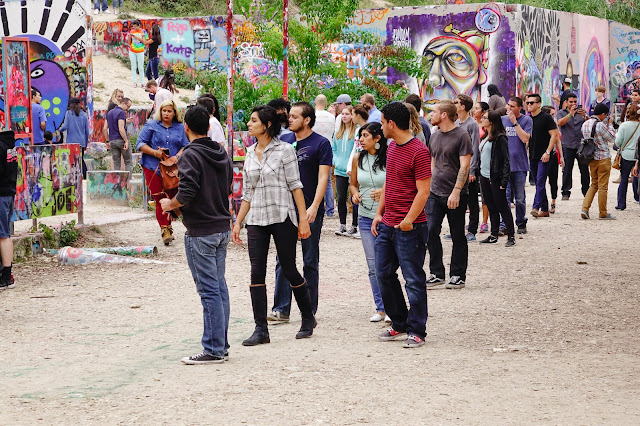 As the pursuit of photography changes more and more I find myself drawn, intellectually and emotionally, to a different class of cameras than I would have in the past. Gone is the idea that every image I take needs to be absolutely technically perfect, or that it needs to come squirting out of the highest resolution, most advanced camera on the market. I've written many times in the past that our collective obsession with the "idea" that all images we take are somehow destined to be printing on huge inkjet printers, at sizes that dwarf life size, and that our viewers will be gallery goers who are hellbent on looking close enough at the work to see the individual ink drops, is nothing but nonsense.

While we might, from time to time, bring together some favorite images and print them for a show, photographic sharing has moved from the walls to screens and, a new gold standard, to personal books. With that firmly in mind the almost perverse pursuit of near infinite resolution in our cameras is veering toward compulsive behavior. At my daily work as a commercial photographer my Sony A7Rii is the most capable camera I own --- but it almost always takes a backseat to the redoubtable Sony A7ii because the 24 megapixel files are big enough for nearly every client request and the economy of shooting, and the relative affordability of purchase, makes the less exacting A7ii my "all-terrain vehicle" of choice for almost everything.

When I head out the door to shoot for myself and share photographs as graphical representations of ideas and as social documentation, my needs are different. Like everyone else I am tired of bringing the preciousness of the "view camera work aesthetic" into situations where it is counter-productive, counter-intuitive and burdensome. I want a camera that is fast, fluid, functional, fun and easy to carry with me everywhere. Few things look more dated to me now that seeing a middle aged photographer, out walking with his family, carrying a big, professional caliber DSLR over his shoulder on a Black Rapid Strap, complete with the almost obligatory "professional zoom", along with a fat and tacky camera bag weighing down the other shoulder.

For sensible walking around, shooting during the daylight hours, having a wide range of focal lengths at one's fingertips, and enjoying the actual experiences of seeing and interpreting life, very few cameras will give one more pleasure than a manageable bridge camera with a fast, wide ranging lens. With all that in mind I stuffed all the other cameras I own into a drawer and grabbed my Sony RX10ii. Not the iii but the ii.

It's relatively small, much lighter than the newer model. and the level of imaging capability per ounce and per dollar is off the charts.

When I go to make images at the Graffiti Wall these days I'm trying to be less like a sports photographer who is isolating some peak of action with super narrow depth of field and more like what I see in Josef Koudelka's work: Scenes of deep focus with lots of data rich detail. Images with multiple object relationships.

When I look at images I am either drawn toward the peculiar and previously unseen and unknown subject or I am drawn into deciphering layers and layers of action and symbols swirling through a frame. Either the tightly rendered face of a person who is interesting because of their uniqueness or a broad, Hieronymus Bosch landscape of social interplay. Of course it is never so binary. It's human nature to want to cover every contingency. Photographers are no different. But with the current, smaller cameras and their increased potential, it's easier to leave the house unencumbered but ready.

I find the Graffiti Wall in Austin interesting for many reasons. One is that artists (and there are good artists who show up occasionally) must be willing to do art that is totally transient. It may live on in their cellphone camera documentation but it will, now, almost invariably be covered with mindless word messages in a matter of hours. At best, in a few days. I find the wide variety of people the "Wall" attracts to be interesting. People from almost every social and economic milieu show up. The only exceptions are the desperately poor who have neither the time or transportation to drop by, and the desperately wealthy who seem to lack an interest in this particular urban phenomenon. All other groups are well represented. For some it's a curiosity and for others it's a cost effective weekend "stay-cation" with no cost for admission and few rules.

People in wife beater t-shirts, covered with tattoos, are walking through the crowd along with the families of West Austin doctors, lawyers and business owners. One group is intent on joining in the spray-fun while the other group seems to have extended to this venue the passive tourism of being on a photo safari or a continental river boat cruise with this being one of the "interesting" stops on the way in route to a nice dinner, with linen napkins and fine china.

When I go I see myself as a photo-anthropologist but I know I am just another gawker. I'm there to see people doing foolish things or playing out their fantasy of being outlaw artists, even though they are breaking no laws here by participating. The young people in the crowd want to climb up the steep sides of the abandoned project while the older people are content to stay on flat land, close to their cars.

I went yesterday hoping to find large swaths of new and interesting art bookended by exotic and beautiful people. That's always my anticipation. And always, when I get there I see a mix of people that's wide ranging and of the moment but not particularly social outliers.

With all of this in play the ability to shoot wide, shoot tight, shoot silent and to do it all with a camera that has an un-intimidating profile is priceless.

I still haven't gotten my head around the need to instantly propel the images onto Instagram or Facebook. I always like to curate images in a more thoughtful and focused way. I'm sure I'll come around to the new world order of mandatory instant sharing, given time. After all, my first experiences shooting at the wall were done with husky and bulky Nikons  with their lenses as fat as my arm... See how much we've changed. 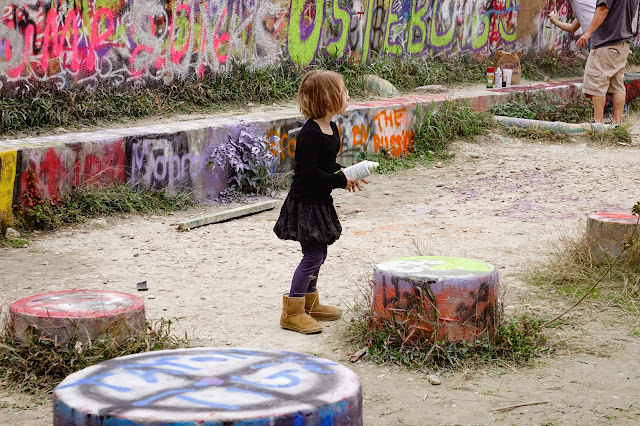 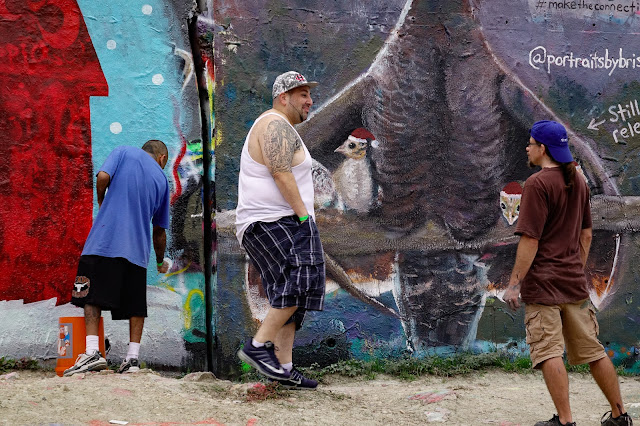 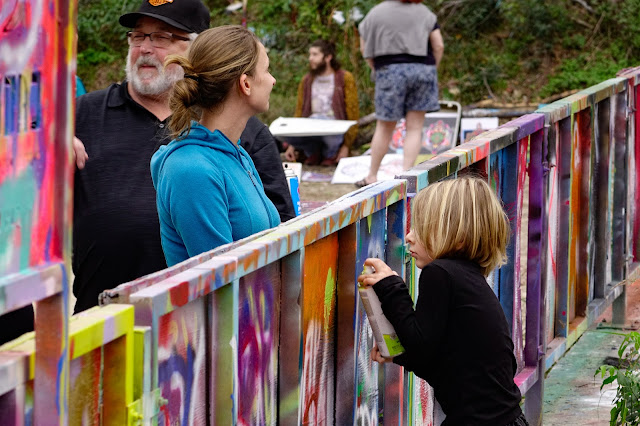 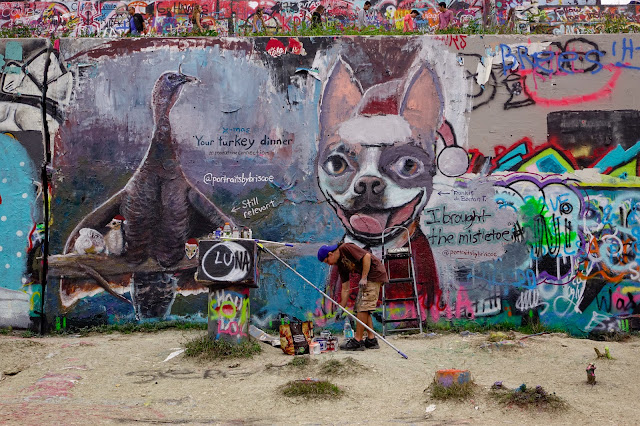 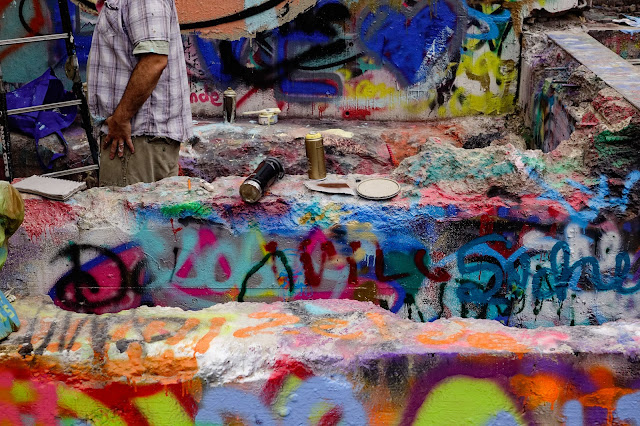 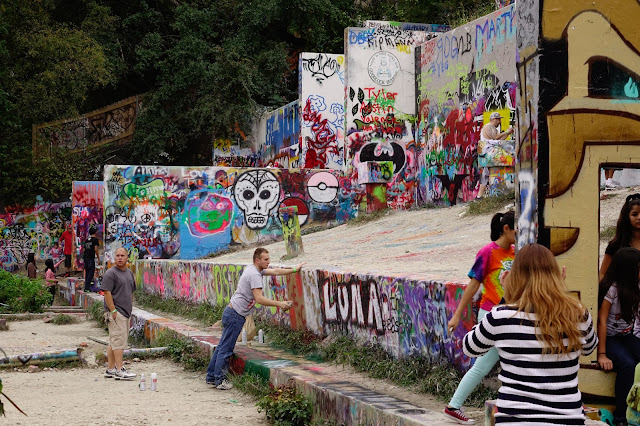 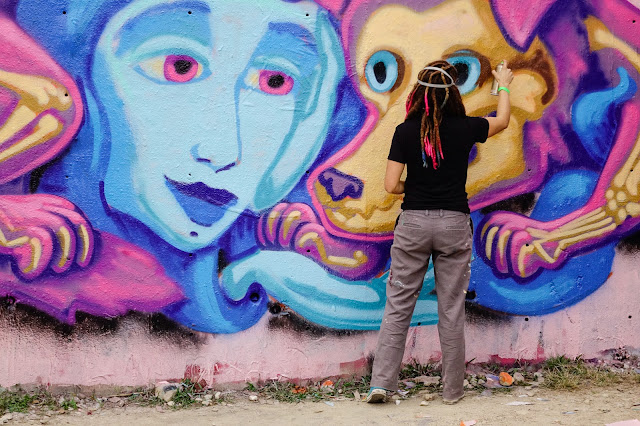 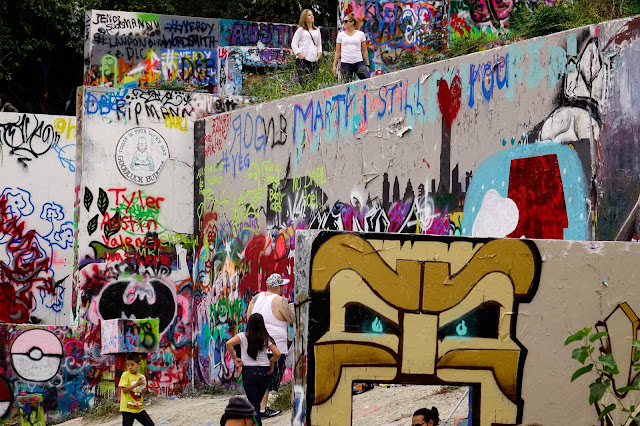 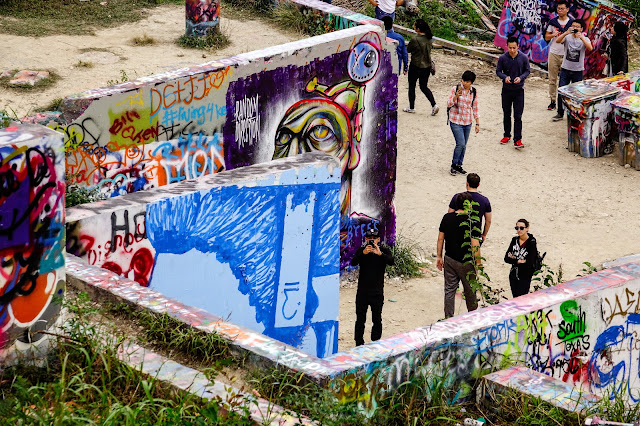 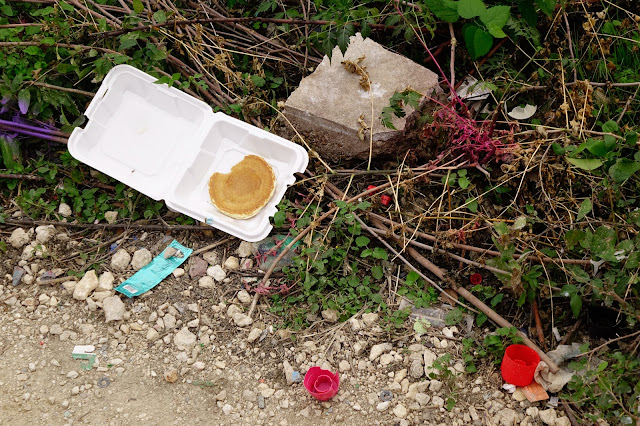 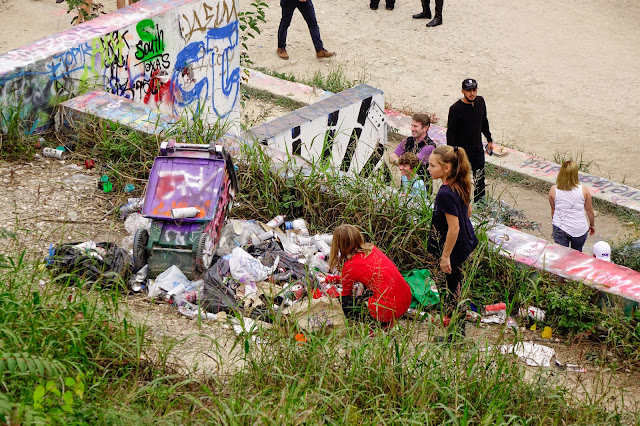 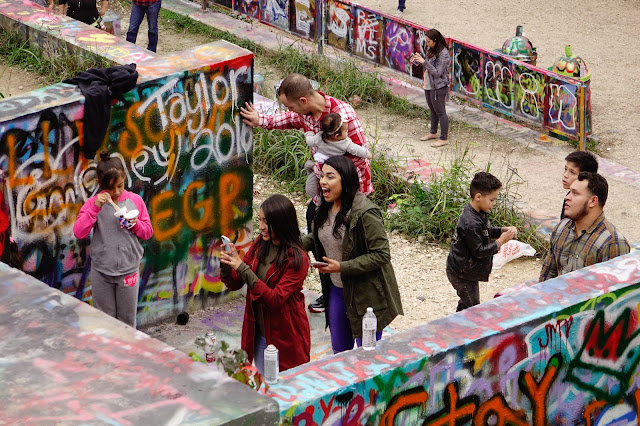 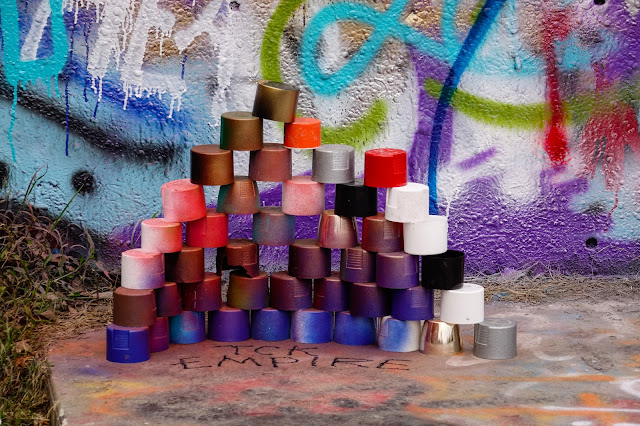 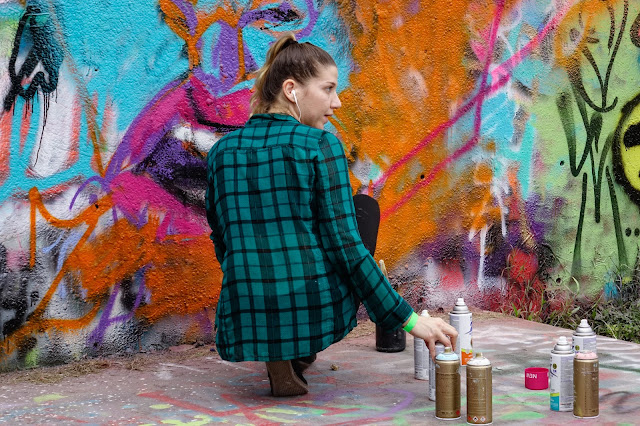 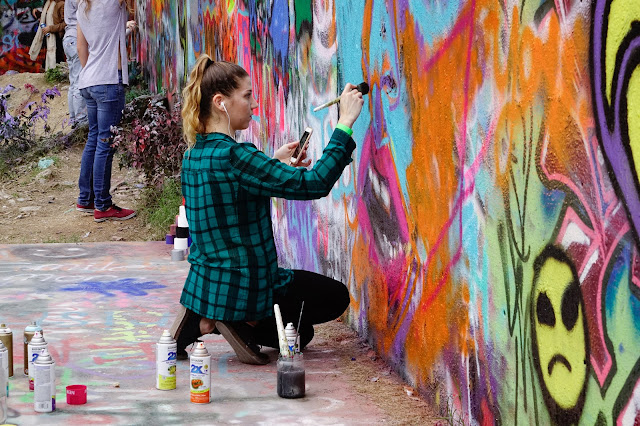 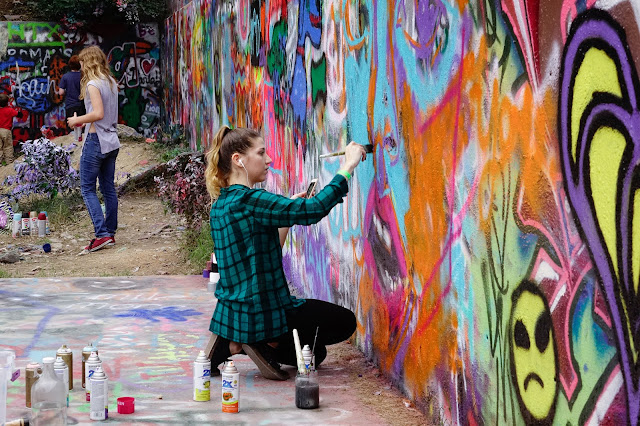 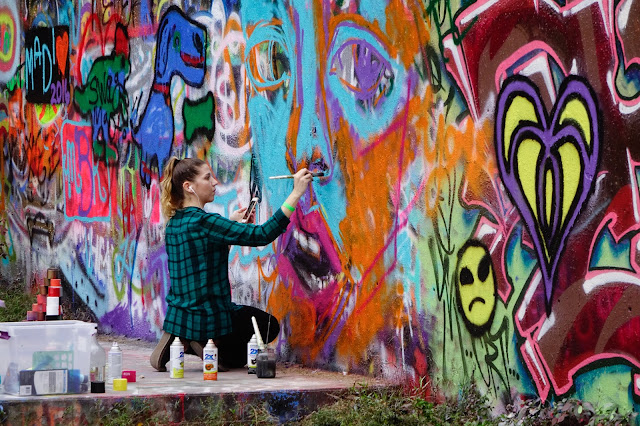 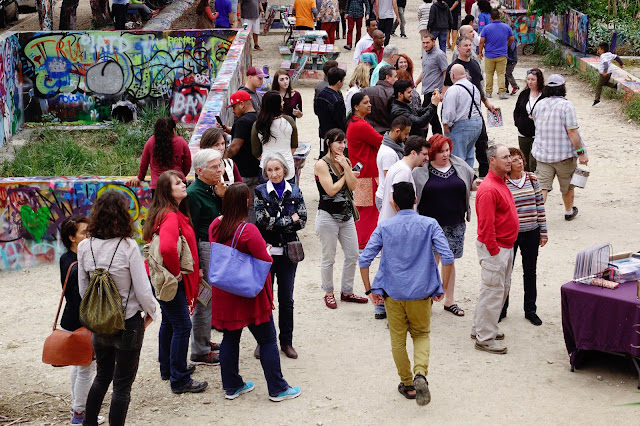 Visitation of the Patricians. 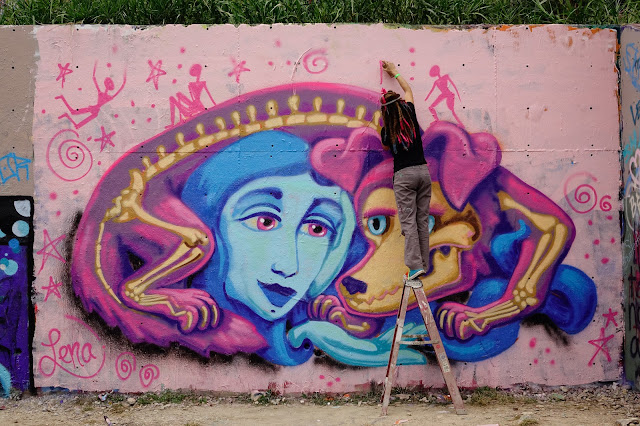 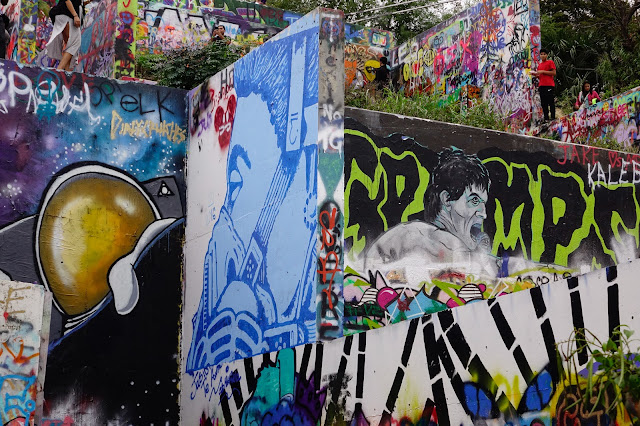 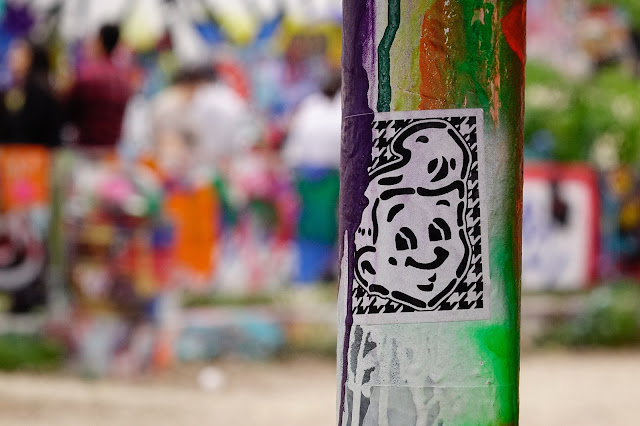 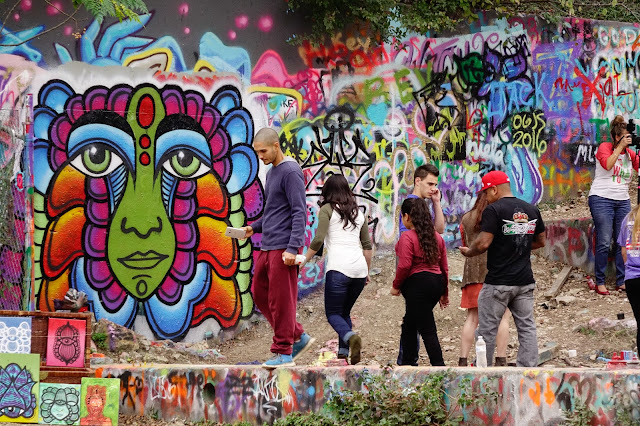 Posted by Kirk, Photographer/Writer at 12:35 8 comments: 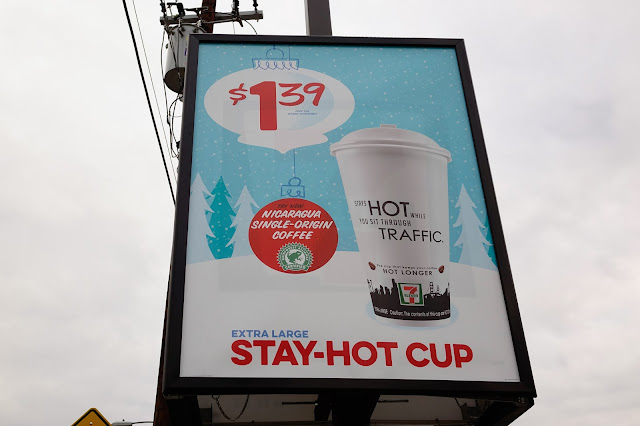 This is a large, illuminated sign on the edge of the parking lot for a 7-11 store on
North Lamar. Blvd. The "sell" is for the cup, the "closer" is the
description of the coffee.

There was a time in Austin when the best cup of coffee in town was at an all night diner called, Holiday House. The large and dowdy restaurant was just on the edge of the UT campus and served as a respite from days and days of bland, dormitory/cafeteria food. At least at the Holiday House you could get reliable eggs and pancakes. The coffee was more or less the American standard at the time: almost "see through" and with all the punch of a loofa. The nice thing about American coffee in the 1970's is that one needed to drink lots and lots of it to get any sort of adrenal buzz and that prodigious intake kept most college students well hydrated... But the real reason it was "the best cup of coffee in town" is that it was the only cup of coffee in town. At least at the odd hours of the day.

Since that woeful decade we've mourned the demolition of the Holiday House and most diners in our town but we've seen a blossoming of coffee shops, coffee houses and coffee kiosks everywhere. In my neighborhood there are two Starbucks facilities in one shopping center. And both are always busy serving increasingly strange coffee drinks that are moving further and further away from the pure idea of coffee as I know it. They offer a wide assortment of sugar-rush caloric time bombs, laced with espresso coffee shots. Where Starbucks fails mightily is in their interpretation of drip coffee. Traditional coffee. They've developed a new science of consumer coffee addiction. They roast their beans for their primary drip coffee offerings for too long. The "burnt" beans increase the flavor load to the tongue (and not in a good way) while actually decreasing the caffeine content of dark roast coffees. The lower dosage of caffeine builds traffic and sales as the serious coffee drinker must ingest more and more coffee to get the same attentive buzz we got from more artistically roasted beans.

Most of the coffee shops provide a good service; a place to park and relax while compulsively checking e-mail and one's favorite websites. I see them as rest stops for the trendy and consumers who believe they are buying a more sophisticated and higher quality cup of coffee.

In my same state of anthropological delusion I always thought of Starbucks as being the coffee of pretension and relative affluence and, in constrast, always thought of coffee served at 7-11's, convenience stores in general, gas stations and McDonalds to be the coffee of the working class. People who, by necessity or choice, wanted decent coffee but at a more affordable price. I presume that this segment of the buying population were habituated to the taste of a more traditional, American style coffee. But now my universe of imagined, coffee drinking gerrymandering has been turned upside down by this sign I stumbled across yesterday.

The cup is nice, I am sure. It's good to keep coffee hot. Most addicted coffee drinkers prefer it that way. But I fail to understand where styrofoam has failed in that endeavor. The real story is contained in that round ornament just to the left of the cup. "Nicaragua Single Origin Coffee." And its additional message conveyed in the green logo at the bottom of the ornament: "Rain Forest Alliance Certified."

Since when did "budget/convenience" coffee drinkers become discriminating about the source of their coffee? Since when did mainstreamers develop a realization about single origin coffees? What is next, Kona coffee at McDonalds? Jamaican Blue Mountain coffee at Exxon? Have we hit a tipping point at which we, as a nation, are hellbent on upping everyone's game when it comes to coffee?

I'm curious to know if this is trending in other regions. I understand that most places have a wild surplus of coffee shops and most cities of any size have somewhere within their borders that just nails good coffee, but is an elevated coffee awareness becoming as universal as the cellphone?

Please report sightings of coffee appreciation mutation in your region. Document it, if possible.

What will Starbucks do when they lose their "hipster/trendy/first arrival" status? Their latest remodels have made the stores louder, meaner, less well lit and less comfortable (the LED pinlighting is egregious...) and I wonder if this will push customers toward more welcoming competitors.

I think Michael Johnston has the right idea. Become your own master brewer. At home. But it's kind of nice to see that, when on the road, there are more and more chances that a good cup of coffee is on the route.

Posted by Kirk, Photographer/Writer at 11:27 19 comments: