First Perfect Use Case I've Ever Seen with a Drone. Wow!

I had to post this one. Even though I found it on the world's biggest photo site.

Posted by Kirk, Photographer/Writer at 18:29 6 comments:

Jeez. What a weird time I had from 4:00 a.m. till about 11:00 a.m. this morning. And this is totally off topic if you are looking for something about photography... 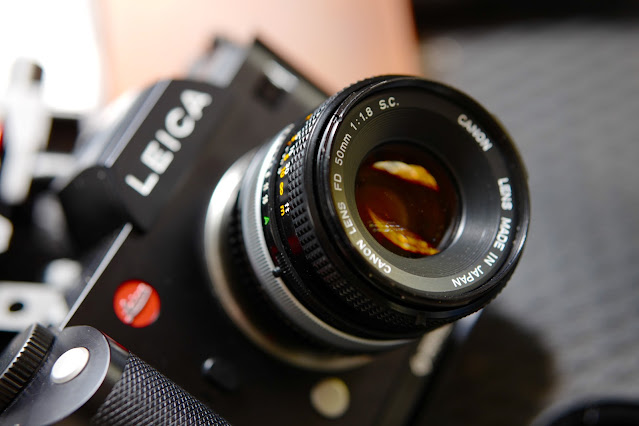 this is currently my favorite shooting combo. It's so illogical and counter-intuitive. An "ancient" camera body from the 2015 era coupled with a lens from the early 1970s. And not a "collectible" cult lens or amazing powerhouse lens. Nope. It's all just comfortable stuff that feels like the cameras I learned on but still has enough technical prowess to make decent photographs. No doubt that your mileage will vary otherwise we'd all be shooting with this combo, we'd all be married to B., We'd all swim more and we'd all complain more....

My day started around 4:20 a.m. today. The early wake-up certainly wasn't by design. I had the alarm clock set for 7 a.m. with every intention of sleeping right up to the edge of the clock's precision and then, fully rested, leaping out of bed and heading over to the pool for the early Sunday masters swim practice. Yep. That was the plan. And that's how it usually goes in my little section of paradise. But not this weekend...

One of my least favorite parts of living and working in Austin is our seeming, collective addiction to mass attendance outdoor music festivals. I love live music in concert halls, small clubs, The Continental Club on Congress Ave. Even solo works at places like The Elephant Lounge. I've seen great concerts at the Bass Recital Hall at UT and on the stages of three or four live theaters sprinkled around town. But the joy of sitting in large dusty or  (weather intruding) muddy field surrounded and hemmed in by chain link fences, being sold $12 dollar Cokes, using nasty Portable Potties strung out on the periphery of a hot field has always eluded me.

The music never has the polish of a indoor venue for many practical, acoustic reasons. And out of any crowd you'll have about 10% of people who are bad actors, or just plain obnoxious. So, at a concert with 100 people at a club you just need to deal with ten people. At a concert outdoors with 100,000 you'll need to be on guard for about 10,000 rude, surly, loud and inconsiderate people. Same 10%. Just feels a lot different when events scale up...

Our next door neighbors made the gamble to rent out their beautiful $3.25 million dollar house (currently on the market, if you are interested) for the weekend via AirBnB. Their house has multi-level pools on a well landscaped deck. Lots of bedrooms and bathrooms, and this weekend the house also had an infestation of 4 hard rocking, sociopathic couples. I had the suspicion there would be trouble when they first showed up and one woman in the group stood on the back deck, facing my house, and screamed over and over again, "This is just fucking incredible." I will give her points for the power of her voice and its range. While 150 feet away she sounded like she was right there in my backyard, standing right next to me.

Not a big deal in the moment. Just a precursor of things to come.

The whole group went off to sit in the dirt and damage their hearing at the concert. When they got back at 10:30 p.m. they started to party....hard. On the pool deck. Right across from my house. The yelling was prodigious. The hoots and yelps were sustained and feral and all of it prohibited by the rules laid out by AirBnB and the home owners (who had escaped to a hotel on the town's periphery). At 2 pm I'd had enough. Even with all the triple-paned windows in the world every scream and every bass note came though into my bedroom loud and clear. I texted the home owners who texted the "guests" who wound down the party at 2:30 and crawled off to sleep. (Rules from neighborhood, home owners and AirBnB: No parties, no noise after 10 pm).

They were gone again all of Saturday. The homeowners apologized to B. and me profusely. Claimed to have made the rules "very, very clear" to the renters. "It would not happen again..." Etc. And, amazingly, the evening progressed well. The group was out on the town. All quiet even at our late bedtime. Ah, the miracle of sleep...

Until the group got back to their temporary base next door and ramped up a thumping good party back on the pool deck complete with ugly people skinny dipping, loud conversations, excited screams and whoops, and lots and lots of music from the sound system. I woke up immediately from a deep and wonderful sleep and looked at my watch. It was f-ing 4:10 a.m. in the morning. They were in a quiet, family-centric, residential neighborhood blithely tossing away any semblance of empathy or restraint and hitting it hard.

I pulled on a pair of pants, walked over and asked/told them to turn off the music and take the noise inside. They mostly ignored me so I walked back over and texted the home owners. Again. At 4:20 in the morning. Calls were made. I assume the renters were threatened with being delisted from AirBnB. They finally shut their party down.

But if you are like me and you get shocked awake in the middle of the night, and then have a confrontation with a bunch of drunk and disorderly "young adults" there's no way you'll ever get back to sleep. I lay in bed thinking of all the most violent chapters in "The Gray Man" series of novels by Mark Greaney. I fantasized about shooting a Javelin missile through the patio doors of the house next door. I sent another volley of texts to the homeowners instead.

Then, since sleep was elusive,  I got up, made a cup of Chamomile tea, tried to meditate about peacefulness and letting go of bad energy, and then (metaphorically) dragged myself to the first swim practice of the day at our club pool.

I usually brag here about my incredible swim performances but not today. All I can say is that rocks could swim better than me today. Two nights in a row of deeply disrupted sleep tend to take a toll. Being royally pissed off takes a toll. I moved down three lanes at practice. From pretty fast to just creeping along. It was my lamest swim workout of the year. But I consoled myself with the fact that I showed up and I finished the workout. That counts for something in my book.

When I got home there were more profuse apologies on my text string and the owners were next door in the process of evicting their renters. I didn't have even a milli-second of second thoughts. And anyone who calls out, "NIMBY" or "Get Off my Lawn" in response can go dig a hole and sit in it and meditate on all the ways that they are way out of touch.

Last I heard from the home owners the entire house smells of pot and cigarettes smoke. (Also forbidden by the rules). They've tallied up a couple thousand dollars of physical damage to their house. They've collected six bags of strewn about garbage. They're pretty furious as well. And they are not ancient men and women. They are right in the middle of the Gen X generation.

This was the second weekend of the big, loud, inconvenient music festival. I hope my neighbors have learned something valuable. I hope they sell the house very quickly to a nice retired couple with very young grandchildren and no desire to leverage their own homestead for some quick cash.

Working photographers really do need their sleep. We get absolutely feisty without it.

Now, who do I sue? The neighbors? The renters? AirBnB? All of them? Letting this one go, I guess. The neighbors are actually pretty sweet. But....that's strike one and two....

Photo news: big purchase on the agenda tomorrow. I need to buy one or two more sandbags. It's for the outdoor video shoot on Tuesday. Might be contending with some breezes.... Big, exciting purchase. More sandbags are never enough.

Posted by Kirk, Photographer/Writer at 15:30 6 comments: