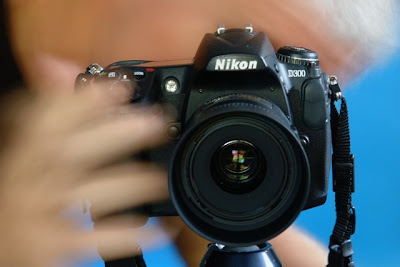 My favorite street shooting combo.  D300+35mm 1.8
The tool and the intention.  Why do I like some cameras and why do others leave me cold?  It's because good images come when the camera becomes invisible and you can concentrate on reacting to whatever is in front of you.  My latest nomination for the best street shooting tool? That would be a Nikon D300 with the new 35mm 1.8 (here's Nikon's official info...) scrunched on to the front.  Why?  If you've read my previous blog about 50mm lenses  you know that the angle of view on this lens has immediate appeal to me.  With 8 elements in 6 groups, and one aspheric element, the resolution and contrast should be just right.  But the real reason I like the combo is that it works well together as a small, light package.  The D300 is overshadowed by the D700 and D3 but is a great imaging machine in it's own right with fast focus, great metering and a really good imaging sensor.  I bought my lens from Precision Camera here in Austin for around $209.
The primary reason I gravitate to the D300 over the D700 for my own personal use has more to do with the overall feel of the cameras.  The smaller shutter and mirror in the D300 means the camera is quieter in operation with a very sweet shutter sound.  The 700 has a more abrasive mirror snap and a harsher shutter run sound.  It's like the old hi-fi analogy of "tubes versus transistors".
The lower physical profile of the d300 with the 35 mm 1.8, along with the noticeably quieter sonic profile makes for a less intrusive candid shooting tool.  The D300/35mm 1.8 is absolutely the most ergonomic digital camera I've shot with so far.  And at $1,000 less than it's full frame cousin.
This is not intended as a criticism of the D700.  I love that camera in commercial shoots because of its low noise and because of its full frame sensor.  It's just not my first choice for personal art. 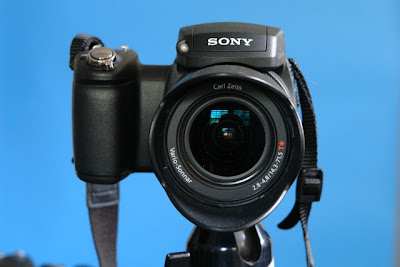 The runner up camera in this race to put together features, handling and quality have to go to one of my all time favorites, the Sony R1.  First, let me tell you everything that's wrong with it: The electronic viewfinder could be lots better (but it works).  The raw file processing time could be much faster (but it barely works).  The autofocus could be much quicker when shooting indoors.  But none of this really matters to me because the camera is so much fun to shoot with. 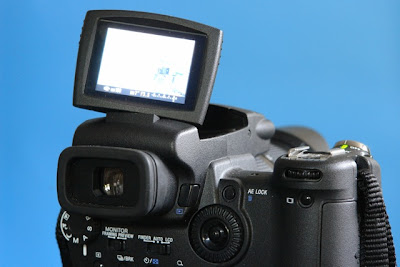 You may not have noticed but a lot of people like point and shoot cameras because of the ease of composition they get with the live view screen on the back of the camera.  Well, the Sony R1 has a really nice live LCD that can be viewed from a number of different angles, including flat on the top of the camera just like a waist level finder.
Couple that with two other vital features and you've got a camera to be reckoned with:  An aps sized sensor (same size as the sensor in the Nikon DX cameras) that shares alot of attributes with the very sharp and very well regarded sensor in the Nikon D2xs.  A real, Carl Zeiss zoom lens that is sharp, contrasty and sharp.
When the R1 first came out people didn't know how to classify it.  The $1900 purchase price and the slow focusing drove off many people for whom this camera would have been perfect! After a while Sony did a rambling discontinuation that was official in some countries and unacknowledged in other countries and then, eventually, the R1 was remaindered in the U.S. market for somewhere around $600.  Since it's zoom lens goes from 24 to 120 (35mm equivalents) and the 24 has very little distortion, I use it as my primary architecture shooting rig and it has passed the critical inspection of several very savvy art directors. 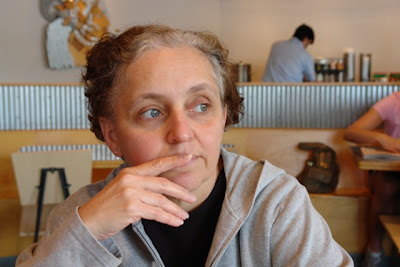 If you see one of these used you might want to pick one up.  They are still highly competitive for many uses such as studio still life, landscape and other slow moving genres.  Here's what they say about it at DPReview:  Sony R1 Review at DP
And here's what Michael Reichmann says about it at Luminous-Landscape.com:  LL Review
Now,  on to my traditional Sunday Rant:  "The Cream of the Crap".  I read this quote in an article about the pleasures of still shooting film.  The whole idea is that the film shooter goes into battle with a plan and conserves his resources (which include not only film but also creative energy) and chooses his targets with forethought and discretion while the digital shooter rushes in a napalms several square miles (hundreds of digital frames) then searches through the ruble to see what he was able to bring down.
I loved the line but I'm not sure I totally agree with the premise.  I think brilliant artists need to constantly experiment and make lots of mistakes to come up their share of good stuff.  Kierkegaard believed that genius and creativity were much like farming in that fields needed to be rotated in order to yield good crops.  And that's what creative experimentation is all about. Be like my friend, Keith.  Choose your targets.  Shoot till you know you've got the shot and then stop.  He's the first guy I've seen with a D3 who can actually shot 10 shots instead of 200 and know when to stop!
(short rant over.  now on to real Art!)
Do you really like good photography?  Really?  Then you must see Wyatt McSpadden's book, Texas Barbecue.  Two reasons why:  Wyatt is a master of natural light and his portraits and images are astoundingly good.  Really astounding.  Secondly,  his work is not that crappy, precious "cutting edge" manipulated crap you see everywhere else.  He's the real deal.  He's not trying to sell you on a style or a new set of Nikon flashes.  He's not flinging around his credentials (but has em if you need em....).  He's just one of the smartest, best shooting photographers who's work I've ever seen.  See it here at Amazon:  Wyatt's Incredible Book!
Here's Wyatt's website:  BBQ Rocks!
Finally, on the subject of books.  If you have an interest in studio lighting and you haven't done a lot of it you might want to snag a copy of my new book:  Minimalist Lighting: Professional Techniques for Studio Photography.  If you need more info check my site:  kirk's site.  Thanks for reading.  Please invite photographers and other people you know who may be interested in our blog.
Have a great week!  Kirk
Posted by Kirk Tuck, Photographer/Writer at 14:11 2 comments: