OT: A Saturday afternoon with the cameras left at home. Enjoying an event camera-naked. 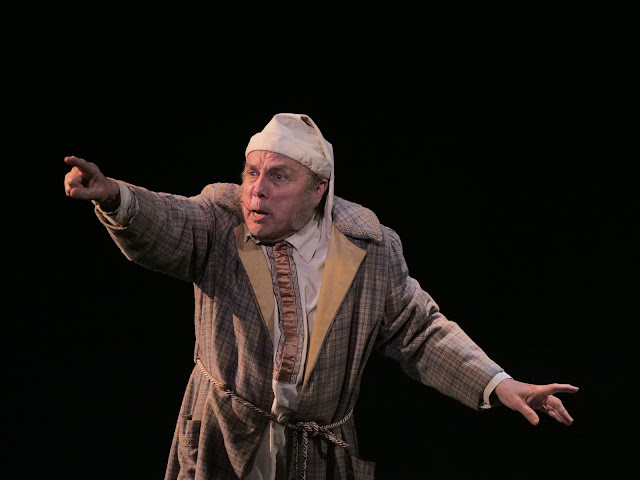 Zach Theatre produces the best "Christmas Carol" I could ever imagine. No hostage to anything but the barest framework of Dicken's holiday tale, Zach Theatre uses contemporary music, lavish doses of humor and pop choreography to get audiences on their feet and then, minutes later to get them quietly pulling out their handkerchiefs to wipe away tears of (alternately) joy or painful empathy. How much more could one expect from live theater? But here's the sad reality of my involvement over the last few years....

...I get booked to photograph the dress rehearsal and I also request attendance, with camera in hand, at the tech rehearsal, a few days before. The play is the same as what the one the audience will experience later in the week but I have the freedom to roam the theater, anticipating the best angles from which to photograph and getting myself in place to take advantage of them. But I don't experience the emotion, the heartfelt catharsis, or the message of the play as keenly or as deeply. I'm doing my job. Almost second by second I'm analyzing changes in the stage lights or iteratively repositioning myself for a better angle; a better composition. I'm deciding whether to continue with the long zoom lens or to let that camera and lens drop on its strap to my side and grab the second camera, with the wide-to-short standard zoom, in order to get some "air" around my compositions. In other words I'm processing too much work process to let the play connect with me in any real way that will affect me and interfere with getting the photographs the theatre needs to fill the seats. Kind of sad, if you think about it. In the middle of everything but not affected by it...

By the time I've shot the play twice (usually bringing Belinda along to enjoy the last dress rehearsal before we get a full audience...) and have processed the thousand or fifteen hundred images I've created I'm burned out in the moment and ready for a break. The photography for this production, since it's a holiday play, is usually right after Thanksgiving and in the heart of those weeks in which all other clients are making up for lost time and piling onto my assignment calendar.

I always have every intention of getting back to see the play and soak up the energy and happiness it delivers but I never get around to it. I'm always distracted by the next shiny object...

I meant to get back and see one of the final shows last year but my mother passed away over the holidays and that was a whole different world.

This year we did the same routine, capturing the dress rehearsal and the tech rehearsal. Life sped up. Assignments cropped up. The holidays delivered a full calendar and yet, I really felt like I'd missed the boat on some level. That I'd forgotten to enjoy something really special. I could always feel the energy of Zach's "Christmas Carol", from the soulful rendition of "Halo" by a young high school prodigy to the wonderful solos that Chanel delivers; like ephemeral but existential gold...

I missed the showtime on Friday evening. Other plans, other plans. But after swim practice and lunch on Saturday I put on my official Zach name badge and headed over to the theater for the 2:30pm matinee. 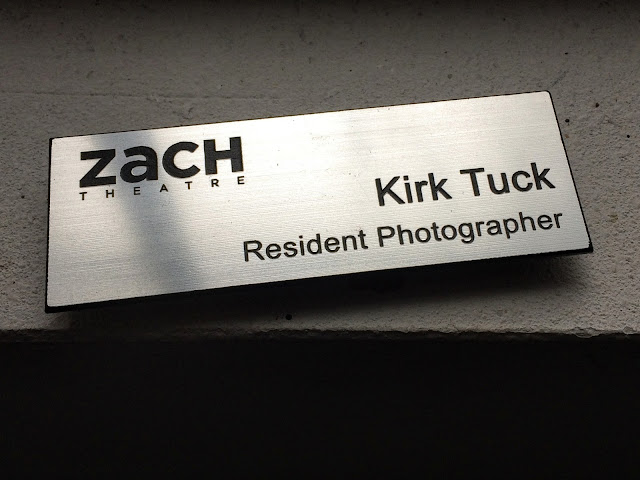 I was surprised to see the parking lots and the front entrance so busy, so filled with families and couples. I walked in and saw so many familiar faces in every corner of the lobby. I asked the people at the box office if there was an extra seat. Of course there was...

Here I was, in a theater in which I've shot dozens and dozens of stage shows and, in which I'd shot at least a dozen video productions, and I was in the middle of the audience with no camera bag by my side, no camera in front of my face. No calculations to make. No side-tracked attention.

The show was perfect. I "saw" so much more of this show than I ever have with a camera in front of my face. I'd given my "analytic" brain the afternoon off. I let my emotional brain take over. I laughed with joy at the fun stuff. I marveled at the way the production had come together since I first saw it. The delivery was beyond script and memory and had, for the actors, sprung into life. Every sentence, every utterance and every lyric felt so fluid, so natural and so honest.

When the Ghost of Christmas Future showed Tiny Tim's grave to Scrooge, I had to pull out a lens cleaning cloth from my pocket to wipe away the tears streaming down my face. When Francene Bayola sang a soulful, "Halo" as a musical eulogy for Tiny Tim, surrounded by his family, I was overwhelmed with the beauty, sadness and emotion of the scene and the performance. I pulled out a second lens cleaning cloth to catch the tears. It was one of the most powerful moments I've experienced in any of the (over 500) live performances I've seen.

And moments later the rush of joy as Scrooge wakes up and is redeemed and set on the path of love for his fellow humans infected me with a happiness and upbeat spirit that's still sparking and speaking to me a day later. (Thank you, Jaston!!!)  I hope it's a feeling I can savor and share all year long.

When the whole cast joins together to sing a rousing, Zach version of Andy Grammer's, "Good to Be Alive Right About Now" the audience jumped to their feet to cheer and deliver the most heartfelt standing ovation I've seen in, well, a long time.

The afterglow was amazing for me. I left the crowds and went downstairs to the dressing rooms. I found my friend Kenny Williams who plays many parts in the production but is an absolutely stand out in the role of The Ghost of Christmas Past. He and I worked this Fall on making the art for his newly released CD of music: Kenny Williams Sings.  Check out the link --- I love the way he used the photos!!! He handed me advance copies of his CD. His energy was amazing. And he still had a second show to do a few hours later!

I was stunned by how much I had missed when in my usual role of photographer. The real power of live theater is only open to you when you bring your full attention. Your intention to soak up every moment, every speech and every move.

Sorry, I am usually cynical and sarcastic but my experience at yesterday's show was transformative. I left believing that we really can change the world ..... if we can figure out how to get past our differences and embrace our better natures. It may be as simple as: Reject fear. Embrace love.

At least that's what I think I learned when I went to the theater without a camera in my hands... 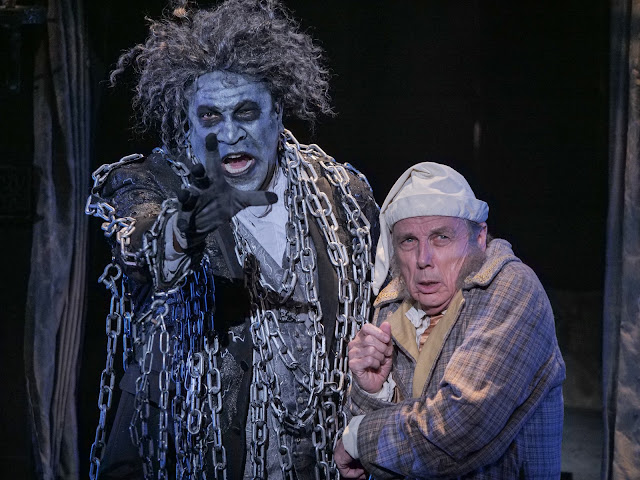 Roderick Sanford's rendition of "Money" is was an amazing
injection of pop culture at its finest.... 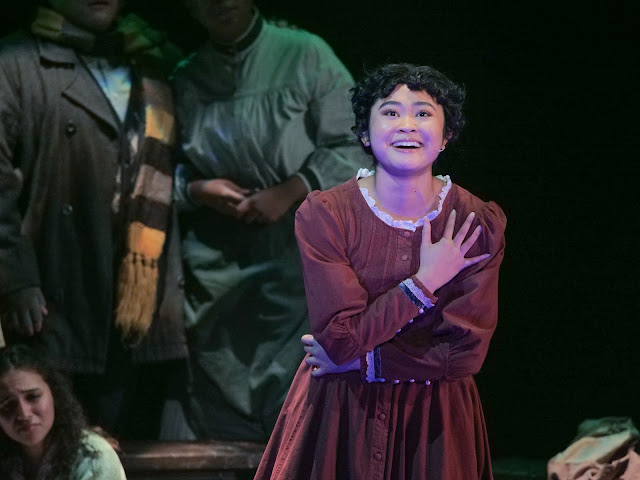 Francene Bayola as "Martha Cratchitt" broke my heart
with her amazing rendition of Beyonce's, "Halo." 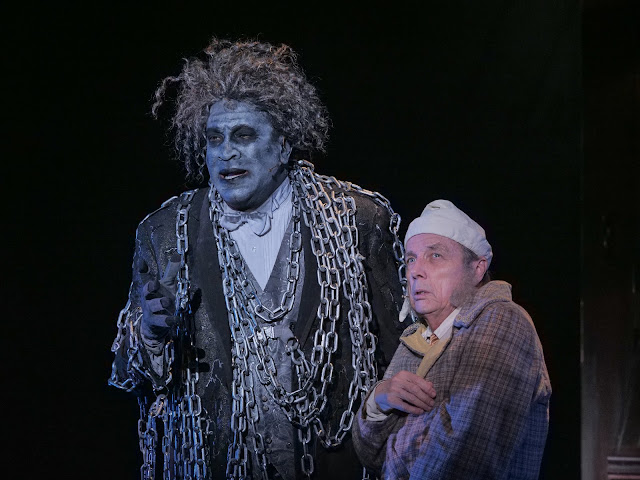 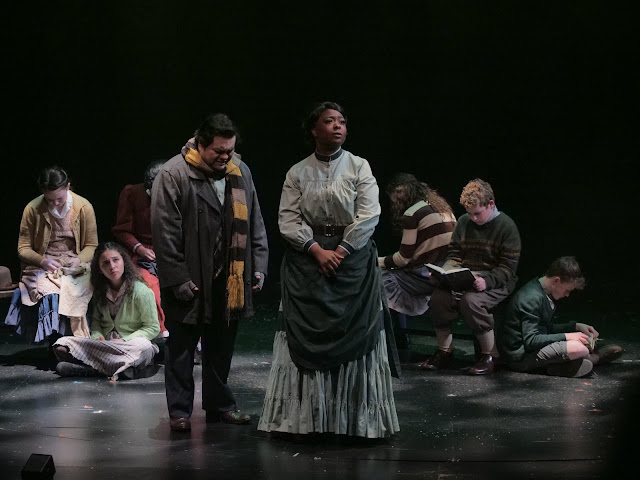 Paul Sanchez and Michelle Alexander were so uniquely perfect as
Mr. and Mrs. Cratchitt, with their adopted family. 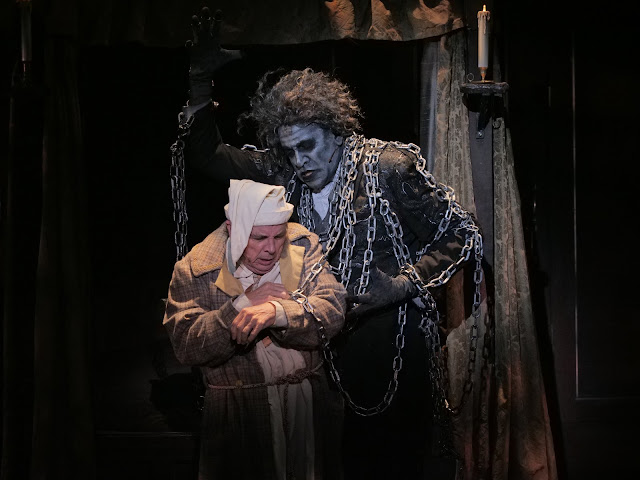 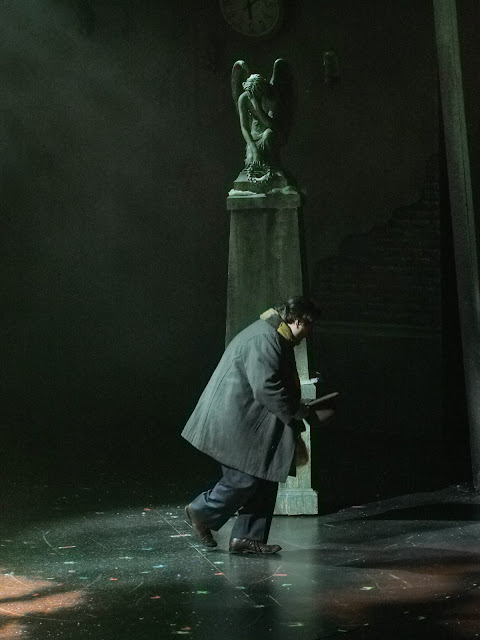 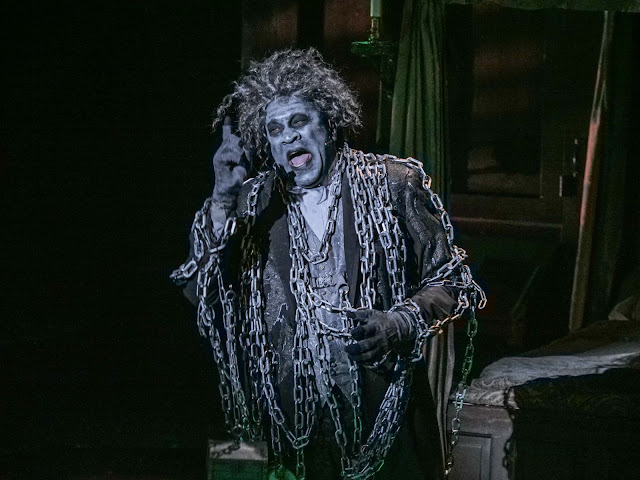 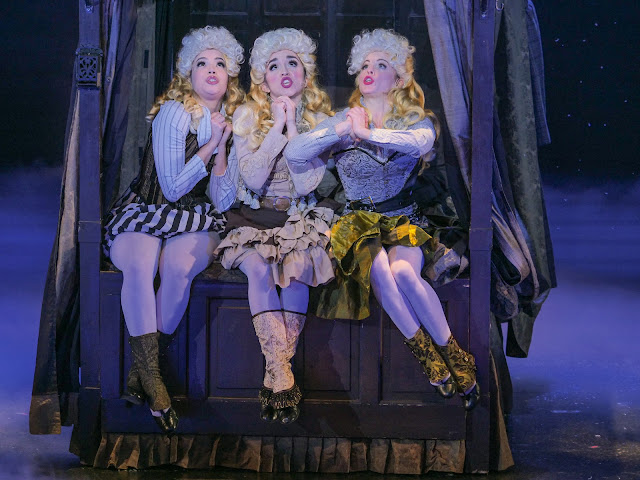 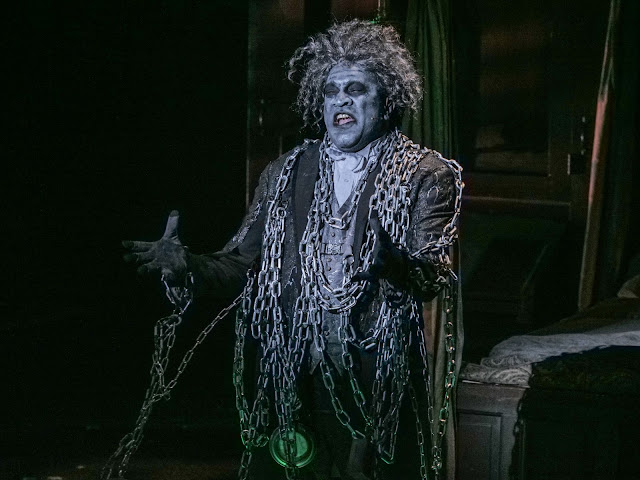 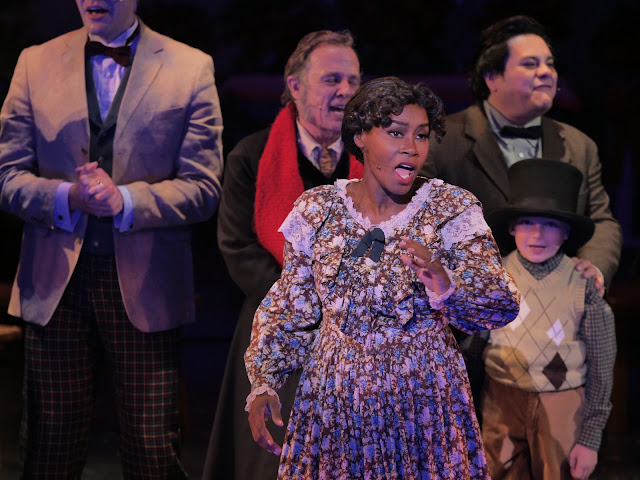 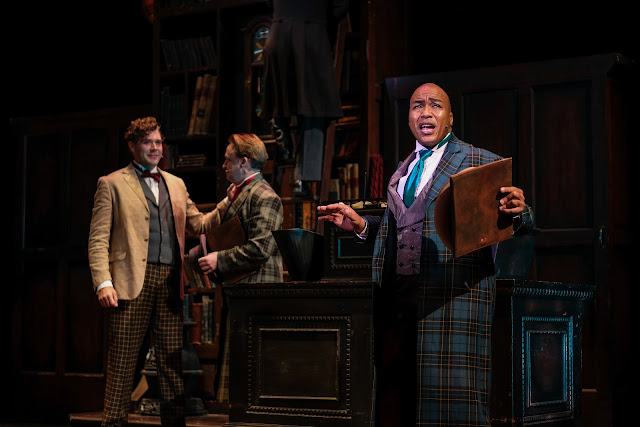 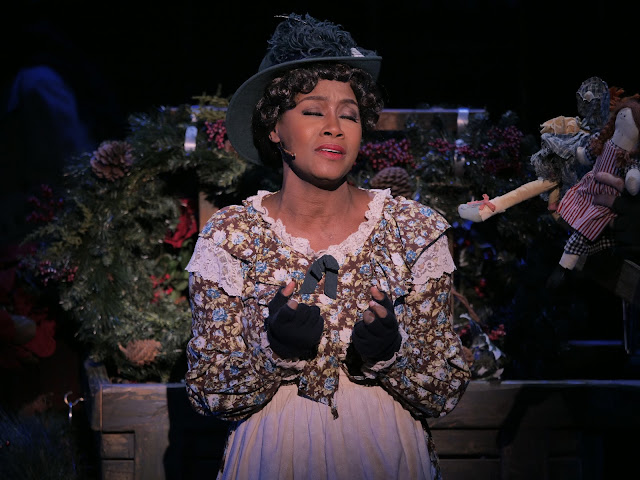 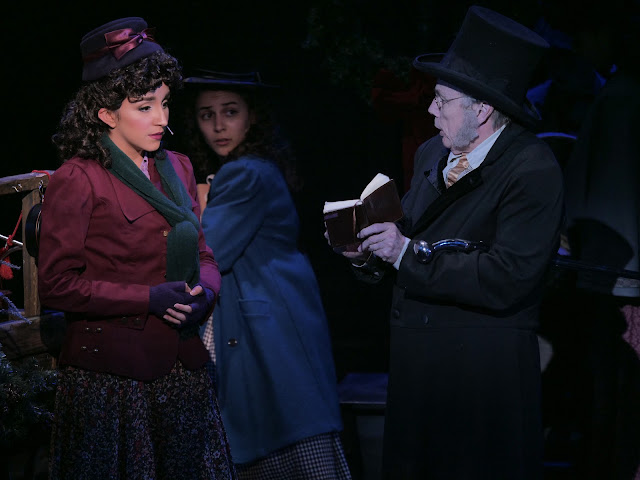 The moment when you catch the perfect expression in the background. 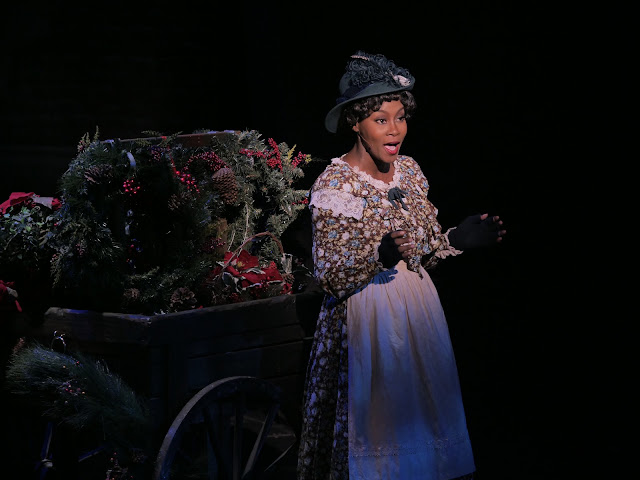 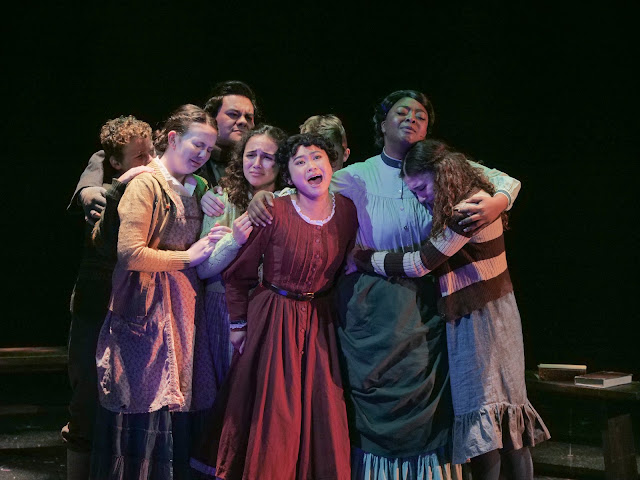 Wanna make a full grown, cynical, seen it all, photographer cry like a baby?
Just have Fracene Bayola (center) sing her version of "Halo."
Box of Kleenex please to seat M 204.....

I hope that each and everyone of my readers had some sort of wonderful, heartfelt, transformative moment in 2018 which changed your idea of life for the better. And I hope it wasn't just a new camera.

Tiny Tim: "And God bless us everyone."

Special thanks to Dave Steakley and Abe Reybold for bringing Christmas to life for me...