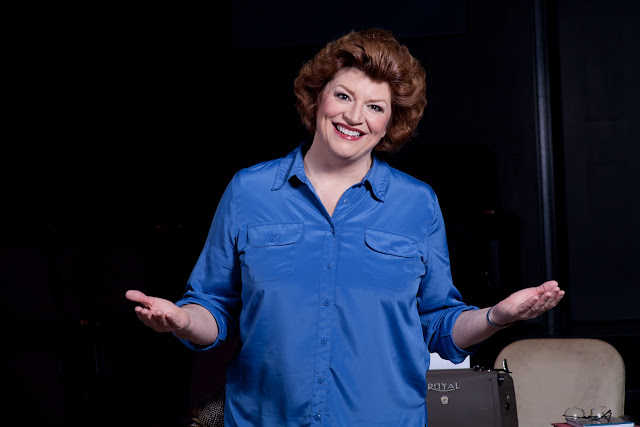 
We shot images for the opening of Red Hot Patriot earlier this year when it debuted on the Wisenhut stage at Zach Scott.  Because Molly Ivins is such a larger than life character in the history of Austin the play is being brought back for a longer run in the Zach Scott Arena stage.  We wanted new images to re-launch the Fall run.

I headed over this afternoon with a simple kit in the car:  Two small Interfit monolights with supplied reflectors, two shoot thru, white umbrellas, two light stands and a bag with a camera and three Zeiss lenses.  I set up a classic portrait light for the above frame.  One light from camera right positioned above and 45 degrees to the side, the other light from camera left, a little closer to the camera axis and set at one quarter the power of the first light.

We took an hour to set up and shoot about 300 different frames.  Barbara, the consummate pro, gave us a range of looks and expressions.  We got in at three, I was packed and heading home by four.  Some work is really straightforward.  It works best that way for everyone.

Why the 1Dmk2?  I have a split screen in there that works really well with manual focus lenses.  And I like the noise the shutter makes when it fires.....

Another hot week coming up.  Hope everyone around central Texas stays hydrated and cool.  Not a good week for a mid-afternoon run.
Posted by Kirk, Photographer/Writer at 18:22 3 comments: 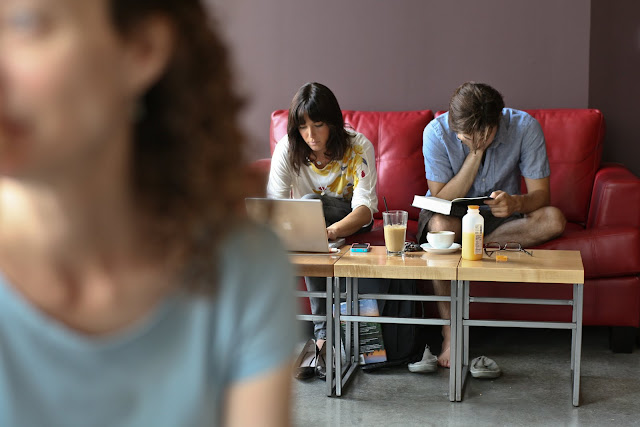 Don't waste time reading this if you aren't interested in the commercial side of photography.
We're in a stage two water rationing situation here in Austin, Texas.  That means we can only legally water our lawns once a week and only during proscribed hours.  And that makes a certain amount of sense given the extreme drought conditions we're living with.  My lawn couldn't make it on once a week waterings and, when we had a week of sustained high temperatures over 105 degrees with wind and no humidity large swaths of green gave up the ghost, lost the very last almost invisible remnants of green hue and....expired to light brown.  But today is my ordained watering day and I set up the sprinkler and doused the yard one more time.  A vague, irrational yet optimistic hope that the grass would be resurrected.  A Sunday miracle.

And while I was driving back from getting some coffee I started thinking about the logic and emotion of watering dead grass.  And I realized that's what commercial photographers have done for the last three years.  We've been watering dead grass.  Some of us having been hanging on to the original, profitable paradigm of photography by dint of sheer momentum and will power. Just when we're ready to hang it all up and get a real job (as opposed to owning a photo business) a project comes in and we move the can forward a few more feet.  But it would take a blind and deaf photographer not to realize that someone came in, stomped on our cheese and then scooped it up with a shovel and tossed it away.  And, unwilling to believe that markets can change so profoundly, we've been watering the dead grass.

Why do I say this?  Because I'm tired of giving pep talks to my peers (of all ages) about the idea that our markets will recover.  That a day will come when we'll saddle up and ride off to an exotic location with a juicy assignment and we'll send in our images while resting on our patios adjacent to our suites at a Four Seasons Hotel.   Better to face facts and move forward with a new plan than to play a waiting game with market inertia.  I talk to many, many photographers and what I hear back is this:  We're seeing more jobs coming our way in 2011 than we did in 2010 and 2009 but they are for much lower budgets.  And almost every job that comes my way comes with a demand for "all rights."  Clients have a million, no, make that billions of options, if their perceive that our prices are too high.  And most of those options live on the web and come with an ever declining price tag as the stock agencies rush to the bottom of the pricing barrel.  With real unemployment at around 16% more and more people have the leisure time to ooze into the business based on hours, days and weeks of trial and error to get a decent shot.  And with many on unemployment they rationalize that they have zero overhead and that any sale for any amount is a win.  And clients have no moral imperative to use us instead of stock or amateur work.  They answer only to their own CFO's and, ultimately, their clients.

So how have photographers continued to make a living?  Let's be frank.  There are still pockets of need for assignment photos.  CEO's still need to be photographed as do new products that come to market.  Pundits always point to niches like this to imply that, if only we worked harder at marketing we could all be filling these niches, but what's really gone is the vast foundational structure of entry level jobs and cash flow sustaining jobs that were part of a heathy industry.  Now, to make real money, you must be in one of two or three photo healthy cities, have a track record and a phenomenal portfolio and be mining a very narrow set of niches.  Or you diversify into related fields.  You teach workshops, write books, run digital printing labs, find a community college teaching job, learn to make coffee....

I personally know a number of photographers who worked for prestigious magazines like National Geographic and did six figure ad photography campaigns for national clients who know struggle to line up enough $300 headshots to pay for groceries.  These aren't people who needed to "up their game."  Their "game" is already higher than their closest competitors and still way over the heads of the rest of the market.  It's the clients who pulled the plugs.  It's the markets that surged in a different direction.  "Good enough and cheap enough" is the current credo.  Yes.  There are exceptions.

And for the last three years the consultants have been encouraging us to advertise.  To hire them for insightful consultations.  To send out the postcards.  To heave endless e-mail campaigns (assaults) over the transom.  And mostly to go out and do what we did when money was NOT a scarce commodity and clients were professional and appreciated good work at a fair price.  In short, they've been begging us to water the dead grass because they live on the run off.

I got an e-mail from the ASMP last week.  Instead of telling me about some new way to leverage my copyright they were informing me about a new workshop sponsored by the ASMP and presented by Blake Discher.  The basic message of the e-mail is that the workshop is about how to stop whining about your situation and go out and make the most of it. You could save the money and get a Nike t-shirt that says, "Just do it."  But that would be too easy.  The ASMP board seems to have a method for dealing with the recession and the stumble of our photo markets and that's to sponsor past and present board members in an endless series of workshops.  Basically they are joining the chorus nudging people to water the dead grass.  Blake has so far been the ASMP's expert on SEO, web marketing and now whining cessation.  He stays busy travelling from ASMP city to ASMP city with the message that all can be healed if we can just market smart enough and aggressively.  Good advice in healthy market.  But for huge swaths of the country?  Just watering the dead grass.  And what purpose does the workshop serve?  It's a Potemkin Village for the ASMP.   Like a doctor with a terminal patient trying to look as if they're doing something constructive.

If we remain in this holding pattern the most we can expect is a further dilution and fragmentation of the imaging industry.  The real secret is that our country has to get back to work.  We have to start inventing, making, marketing and selling products again.  We have to put people back to work.  We have to give retailers a reason to advertise in print and other media.  We have to stop believing idiots who would have us all working for free. We have to pull together and educate the kids coming up behind us in basic business so they understand the tremendous value a customer can derive from an artful image, well used.  We have to understand the value we add to advertising budgets.  We need to start positioning ourselves as creative partners, not photo day laborers for hire.  We have to help everyone understand the real costs of being in business and of doing business.

Only then will our marketing efforts be anything more than watering the dead grass.


So, what to do while the ground lies fallow and waits for a break in the drought?  And we have no way of knowing whether or not the rain will come again.  Or if our landscape will return to desert.

There are no guarantees in life.  No one promised that our jobs would maintain their form and value through a lifetime.  We'll scramble to find the niches.  We'll broaden our offerings.  (although I still remember the disastrous attempts of hordes of photojournalists to jump into the, at the time burgeoning, wedding market and survive a radical course change) and broaden the demographics of our offers. And we'll start building up other skills.  I'm lucky.  I can write books.  I have a book on LED lights coming out soon from a traditional publisher (Amherst Media) and I'm putting the finishing touches on my first e-book.  I write presentations.  I write scripts.  I've been modestly successful in investing.  But I know I'm not betting my future on a stupendous recovery of the traditional photo industry.

A note directly to working photographers:  Watering the dead grass is a waste of time.  If you're going to spend the time and money watering you'd better make sure you've planted some new grass seeds.  And that means thinking of new markets and new customers.  Anything else creates mud.
Posted by Kirk, Photographer/Writer at 14:29 17 comments:

What I learned in my DSLR video workshop yesterday. 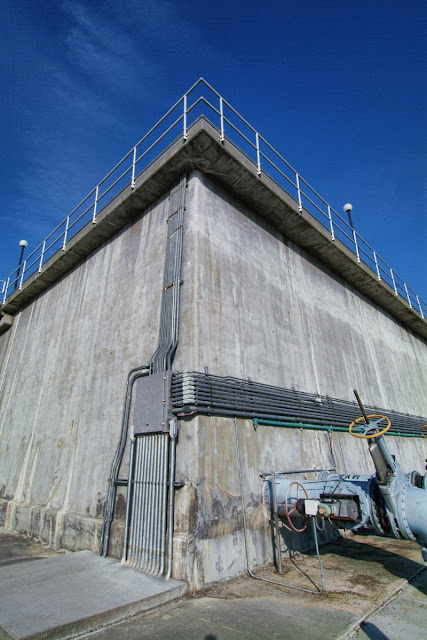 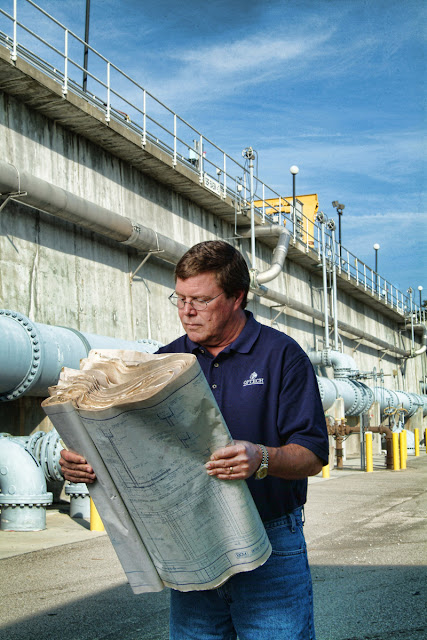 Having a plan and a script keeps you out of the #1 tank. 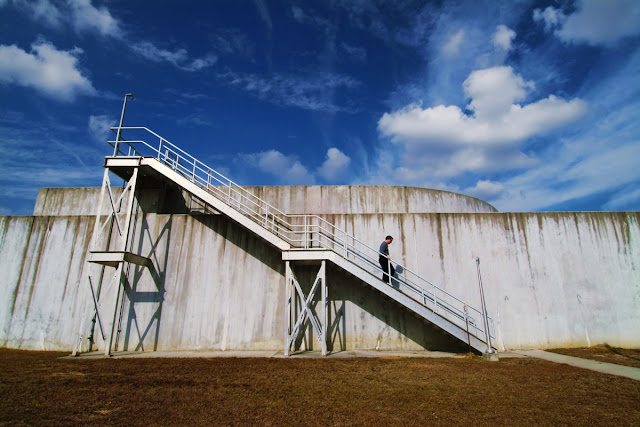 Posted by Kirk, Photographer/Writer at 13:26 7 comments: