A review of a recently unearthed 35mm lens that I have re-evlauated and added back into active service.

Back in the early days of my Panasonic S1 system purchases I bought three different Sigma Art lenses. I knew I wanted a fast and sharp 85mm. I thought I could get a long of use out of a fast and sharp 35mm, and I presumed I'd want or need a 20mm lens and there was one in the Art series that seemed like the best choice for optical performance. It was the hefty 20mm 1.4 Art lens.

The one thing all three lenses shared was a far above average size and weight. And most would say, slow autofocusing. The original 85mm 1.4 was replaced this last year by a new version that is 50% smaller and lighter and so I traded up immediately. The new version is also a very high performance lens and delivers great images, even when used wide open. I don't have nostalgia for its predecessor.

The 20mm lens was big and ponderous and I ended up using it on a commercial assignment once. Used wide open the amount of vignetting was beyond amazing.  I just don't shoot much super-wide and I thought I could do as well, for the kinds of work I need to do with a very wide angle lens (inside industrial plants, weird landscapes) with the more recent, small and light, 20-60mm Lumix zoom lens. And, as a side note, the 20-60mm is not a bad "walking around" lens. The performance at 20mm when stopped down to f5.6 or f8.0 is absolutely fine for those times when I think I might need to be super wide and it's easy to handle. Having some good range coupled with a big resolution camera means it can often be a solo lens, if the intention of the day is specific to the angles of view on tap.

That left the Sigma 35mm f1.4 Art lens as the odd man out. It's the lens (and focal length) I've had trouble warming up to until now. It's bigger, heavier and bulkier than the slower 35mm lenses I've used in the past so I put it in a drawer and moved on to trying other solutions. I have a 28mm f2.8 Contax/Zeiss lens that I like a lot but it's sometimes too wide for the way I see things; especially when photographing anthropologically, on the streets. I have three different zooms lenses that also include the 35mm focal length in their range and I'm sure any one of the these would work adequately well if stopped down a little bit. But lately I've been missing the crispness of the Sigma 35mm f1.4. It's really sharp in the center of the frame when used wide open but when stopped down to f4.0 it's astonishingly good all across the frame and it delivers a level of detail that I just don't see when using any of my zoom lenses at that focal range.

Recently I saw a video with the lens designer for Leica and he extolled the virtues of his company's lenses (as we knew he would), but under persistent questioning he acknowledged that their 35mm f2.0 SL Summicron was the best of the best. I started thinking about that lens, but was slowed down from purchasing it by two things: The nosebleed pricing of $5,000+ USD and the idea of spending so much on a lens that is less interesting to me than other focal lengths. I wondered just how much use I would get out of a lens with that price tag. And I daydreamed about retiring and ending up with only the 50mm f2.0 SL lens and the SL2 camera --- for everything!

Fortunately, I have a friend who is not constrained by ideas of budget and is also the owner of much recent Leica inventory. I asked him if he had an SL35 and (un)amazingly, he did. I borrowed it for a day and shot with it in a testing sort of way. Trying to discern how it might be better than the lens I already had sitting in the tool cabinet. It's a beautifully made lens but it's also nearly as large and maybe just as heavy as the Sigma 35mm f1.4.

But here's what I found on the optical front when using each lens on the 47+ megapixel Leica SL2, anchored on a big tripod:

There is a look to a 35mm frame when shot at f1.4 that is unique. When used close in the fall off in focus is striking and a look I haven't appreciated enough in the past. You can get a similar look at f2.0 but it's not quite the same and sometimes the subtle differences are important to a photographer's way of seeing.

When both lenses are used at f2.0 the Leica does a better job keeping the corners and edges of the frame critically sharp. I conjecture that the lens is better corrected for field curvature and so doesn't appear to degrade at the periphery in the same way. The Sigma Art lens is just as sharp in the center of the frame and, if you move away from my old school, center focusing methods and move the focusing square over something closer to the edge of the frame the lens is actually sharp there as well; it's just that you can't presume focusing in one plane will include sharpness for both the edges and the center.

By f4.0, where I usually end up working the most, I couldn't really tell a noticeable difference between the lenses. The Leica was a bit contrastier which gave the files from it the appearance of more acutance but when adding contrast to the Sigma I could get the looks pretty close. This is where the logic of spending an extra $4400 dollars fell off the rails. If the lenses were close enough to be considered within the margins of user error at the most used settings was there any logic at all to parting with ever more money?

The one area in which the Leica lens was noticeably better had nothing to do with its imaging performance and everything to do with focusing. In both single AF and continuous AF, in video and regular photography, the Leica's focusing was much quicker and locked on tighter. If AF performance is a higher priority than price, and it makes a difference in your day to day work, then a case could certainly be made that the Leica was worth the spend. Especially when used on a Leica body.

I work in much the same way no matter which camera I use. I set the camera to S-AF, I set the AF mode to either center square of center zone, I point the camera at an object or person I want to photograph, press the shutter button halfway down, lock focus and then push all the way down to actuate. I don't do "back button." I don't do "AFL" or any other permutation of button oriented control. If I need to lock in focus I turn the camera or lens to "MF" and fine tune. I know it's not the way everyone else works but it's my methodology.

Once I thought about all this it became clear to me that I needed to come to grips with my thoughts about the Sigma. It's a very powerful imaging tool in a very valuable focal length. And it's actually quite affordable for what it is. Sigma also produces a new, i-Series 35mm f2.0 and I've considered buying one of those and selling the Sigma Art but I have a sneaking suspicion that the trade off for lighter weight and smaller size is a compromise of overall optical performance. It's interesting that right now one can buy the 35mm f2.0 for about $639 or the Art lens for $799. The compromises are straightforward.

In the moment I lean more towards the less compromising overall performance of the Art lens. But take that with a grain of salt. I'm waiting for my local camera store to get in their shipment of the i-Series 35mm lens so I can try one out and compare it. If the visual differences are negligible I'll trade the speed for the smaller profile and reduced weight. But as it is I newly enjoying taking the Art lens out for a spin. It's really very good as far as its ability to produce really snappy and detailed images. And it's not as if clients are falling all over themselves to have photos made at the highest end of possible production quality.

I'm happy to have the 35mm Art lens for another reason; I think Sigma pushed to bounds of design and craft to make the original Art series lenses and created optical systems that are as relevant and near perfect as this lens was at its introduction in 2012 (the family of, not this particular mount). It's a bit of a classic and in the future we'll have different choices such as stepping up to the Art 35mm f1.2 or stepping down to the i-Series. The 1.4 will have its own distinctive look and it's possible that it's a look I'll like better than what I'm offered in the future.

I'm off for a walk with a Leica SL and the 35mm f1.4 Art. I just updated the lens firmware so the power consumption vis-a-vis the battery reads correctly to the camera. I guess I'll see if I ever get comfortable with the 35mm focal length. It's a struggle. 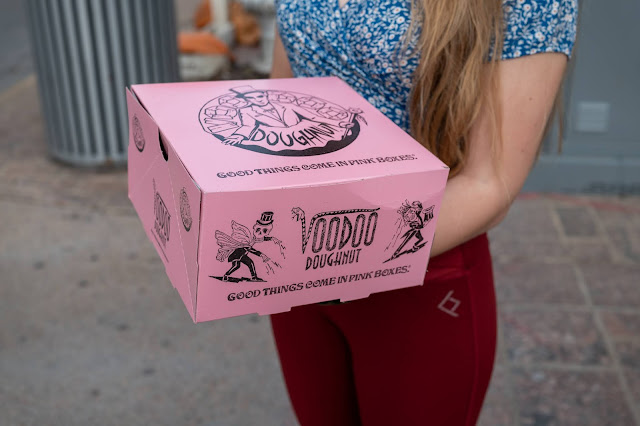 Photo taken with the Leica SL and the Sigma 45mm f2.8.
mmmmmm. Donuts.

Just a thought: Panasonic did announce a 35mm f1.8 on their most recent roadmap. That makes for another contender is the leisurely contest of 35mm lenses for the L-mount.

Posted by Kirk, Photographer/Writer at 16:01 5 comments: