Staying on message is important. For readers and for writers. Here we write about photography. Let me know if you need me to start a swim blog... 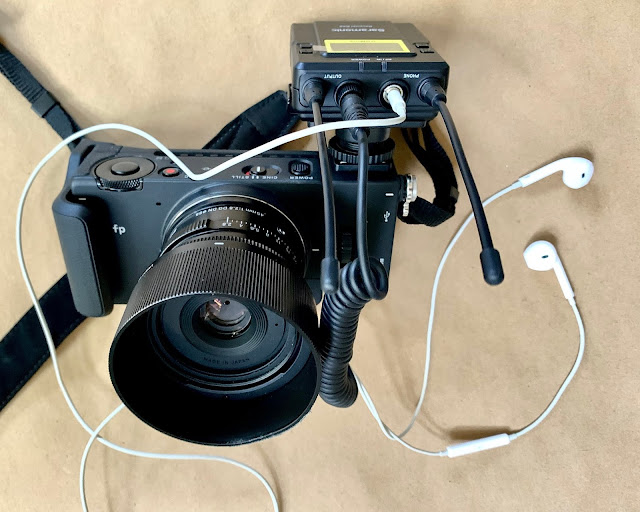 Confession. I was going to go a bit off topic today and write about grandmother Tuck's incredible method for making ham salad. I was going to reminisce about visiting my grandparents in the small town in central Pennsylvania where they lived, and go into detail about their house; even sharing details of their big television set in the living room, with the ceramic sculpture of a black panther sitting on top. The panther had a dial midway down its torso and one used that to change the orientation of the rooftop antenna mounted three stories up on the roof of the house. Using the panther belly mounted control you could fine tune broadcast reception! That one feature made such an impression on me...

Before getting into the secrets of grandmother's ham sandwich I was going to regale readers with fragmented stories about my father and his father sitting in the living room of the house, listening to the radio for the live broadcasts of the Pittsburgh Pirate's baseball games. And then maybe segue into a delightful and nuanced story about my sister sitting at the oh so expansive dining room table making toothpick sculptures, which would lead, of course, into a story about my older brother sitting in a nicely upholstered chair in his bedroom (while visiting) on the third floor of the house, reading the earliest issues of the Marvel Spiderman comic books...

But instead I'll hew to my new resolve and try to stay, at least obliquely, on the subject of photography ---and by extension --- a bit of video production thrown in for good measure.

But I don't want to leave you hanging so I'll give you the TL:DR for the ham salad. The secret was peanuts. She added peanuts to her ham salad and that savory addition made for the best ham salad sandwiches I've ever had during my full and happy life. End of story. Oh, and the toothpick sculpture turned out well, the Pirates lost (as usual, which generated salty language) and my brother lost his copy of Spiderman #1 long before they started trading for upwards of $100,000 (in mint condition).

Which brings us to the Sigma fp, once again. I was happy to find a weird review of the Sigma fp as a cinema camera in an interview with an award-winning cinematographer and underwater camera engineering expert with deep experience in media such as IMAX. The guy is a member of the Australian Cinematographers Society and an inveterate camera and lens tester. The actual interviewer is goofy but Pawel is pretty rock solid and has some amazing things to say about the video capabilities of the tiny camera. See it here. And here is the take-away quote from the cinematographer:  "When I say I like this camera, it's as if it cost $60k, I would have still bought it."

Added: Here's a review by a very smart and talented photographer who I've known since our college days in Austin: Ellis reviews the FP.

I think those of us who took a chance on the Sigma fp have ripped through a lot of words to try and explain what it is about the camera that endears it to us. It's obviously got less gingerbread and comfort features than cameras like the Sony A7iii and the Panasonic Lumix S1, and as far as photography goes there are some drawbacks to use, but across both video and still imaging there are several consistent features that make the camera well worth the "paltry" $1800 price tag for those who appreciate those features in spite of not having the  cupholders, automatic transmissions and heated seats of most current higher end cameras.

The first is something that can be measured objectively. The Sigma fp has some of the very highest color accuracy of any production camera on the market. In Pawel Achtel's tests the Sigma fp seems to slightly outperform the Sony Venice cine camera ($42,000, body only) in this regard, as well as the Red Ranger Monstro 8K  ($59,950 body only).

The second point that Mr. Achtel makes in the camera's favor (and here he is making the statement about video output) is that the camera's high ISO is amazingly noise free. He suggests that it is nearly noise free to 10,000 ISO and usable at 25,000, with a bit of noise reduction tossed in.

I'm maybe a bit more conservative when it comes to noise but I'd use the camera at ISO 6400 without much worry for stills; as long as I was careful to get the exposure just right. As for color accuracy, I don't have a way to accurately measure it but I have to say that the files that come out of the camera, both as photographs and also cinema DNG video, are some of the best I've ever seen.

So, No. It's not a good, all around snapshot camera. It's a horrible, just horrible sports camera. It's not a good camera for shooting active dress rehearsals in the theater (I tried once with lots of sweat and gritted teeth). But when it comes to shooting as one would with a movie camera or with an old Hasselblad it delivers amazing files and a similar workflow.

Yesterday I put on a wireless mike set-up and gave the camera a video spin as a "snapshot video camera" using 8 bit .Mov files with the camera set to 4K UHD All-I at 29.97 fps. It was great. The audio is fine as long as I pay attention to the meters and never let them clip. (It's one of the few cameras I think I'd prefer to use in a dual sound video set up just because the meters are small and the control interface a bit buried...).  It's a small package and since it doesn't have mechanical image stabilization built in I cheated by using the fluid head on a monopod.

While there are a lot of great photography and video camera out on the market this Sigma fp really speaks to people who love to tinker with their files and are willing to sacrifice ease of use for more visual perfection. More cowbell...

This morning I saw a video posted on DP Review that showed some footage shot in .Mov with the Sigma fp camera. The "cinematographer" listed as a shortcoming of the fp that there was no flat profile. But that's because it features uncompressed raw files which are much, much, much more color gradable and contrast adjustable than Log profiles (which can be added downstream from a raw file import, in post). The camera just needed to be set up to use the raw DNG files and to write them to an external SSD. (added:) In fairness the writer did say that he missed having the Log profile in the .Mov mode.  I contend that you would know whether or not the camera has a Log profile when you do your research before buying.   He also suggested that the color settings (might be called profiles...) such as 'cinema' 'orange and teal' etc. were too intense or overdone. And I would agree with him if each profile was not widely adjustable. You can decrease the effect of the color settings all the way from a plus 5 to minus 5 with the use of a menu item, for each color setting. You can also adjust the contrast, sharpness and saturation of each look in +/- five steps as well. That makes it perfectly adjustable for just about anything you'd want to do. You can even make .Mov files as flat as a pancake, if you want to by also using the "Tone" control in conjunction with the "Color" control.  The article seemed to short change the fp when much of the problem was a lack of experience with the camera...

So, we're still staying at home but that doesn't mean we can't test, shoot, evaluate and vet our results.

Sorry, no chat about swimming. It just didn't come up.

Added note: Richard Butler got in touch with me and we e-mailed back and forth. He directed my attention to the line where he (correctly) went into the color profile sub-menu to change the strength of the profile but was still not able to set a low enough contrast for his uses. I missed that. I apologize.

I do agree with him to his point that a nice, flat profile like Fuji's Eterna would be a welcome addition for shooting in .Mov.

Posted by Kirk, Photographer/Writer at 17:46 9 comments: