A week in the rearview mirror. Camera at my side. Baffled by much of life. 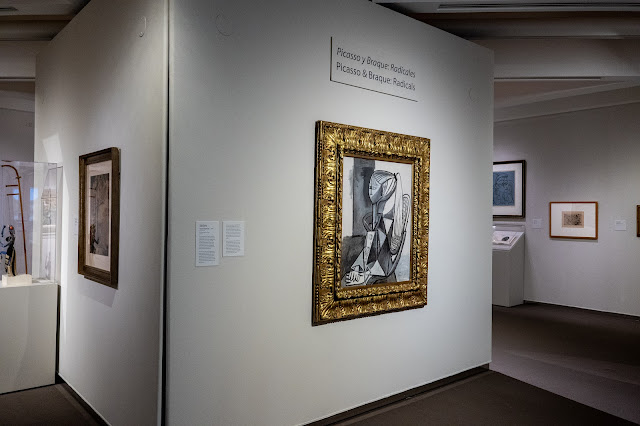 An exhibit of Picasso and Braque works at the wonderful McNay Museum in San Antonio.
I like quick trips to see museums, family and friends and to eat great Tex-Mex food in San Antonio. But I only really enjoy my time when I plan for it. Sadly, this week B. and I had to go there for a funeral. My sister-in-law's father passed away at the good age of 94. My sister and her husband flew in from the east coast and my brother's grown children came in from...everywhere.
Funerals are never fun but the silver lining was being able to see everyone again for the first time since the start of the pandemic.
Since my parents have both been gone for a while and since I sold their property a few years ago we had to stay in a hotel which felt odd since San Antonio had been "home base" for so long.
One happy part of our trip was the opportunity later in the day to visit what might just be the finest art museum in Texas; the McNay. Unpretentious and yet filled with endless and recognizable masterpieces of the 20th century the museum is also augmenting their collection with contemporary (as in "right now" ) art and one exhibit of large street photography images from San Antonio's largely latino west side was juxtaposed with works by Van Gogh, Matisse, Pascin and Renoir. It was a fun pairing...
Since photography was NOT a priority for something as somber as a funeral I didn't take a camera with me to the mass or the cemetery but I did pack a camera for our stroll through the museum and also just to keep my hands busy during the mellow parts of the two days we were there.
My choice was easy. I took the Leica CL and the Sigma 18-50mm f2.8 lens. It's a small package and it works very well for just about everything. All these images are from that camera and lens combination. 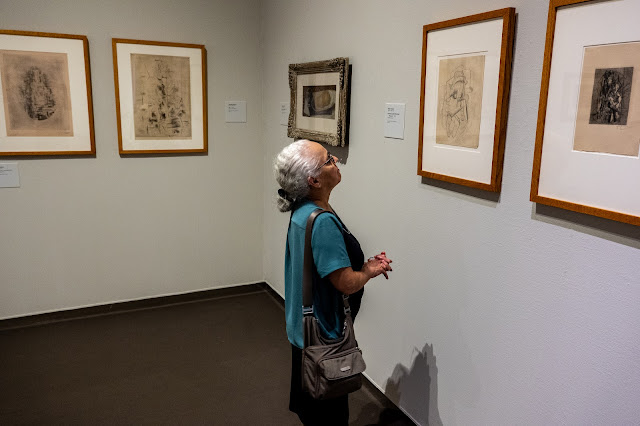 B. Ponders the Picasso/Braque show. 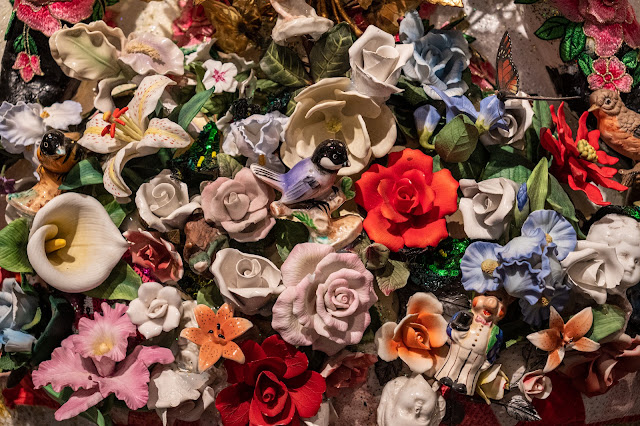 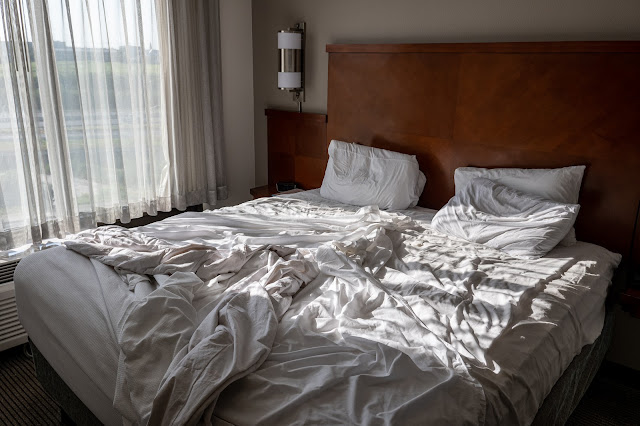 We stayed at a Hyatt Hotel near my old stomping grounds.
Everything about the room was just fine except of the air conditioning which was far too loud when doing its job. I finally got up at 3 in the morning to find a set of earplugs in my camera bag. 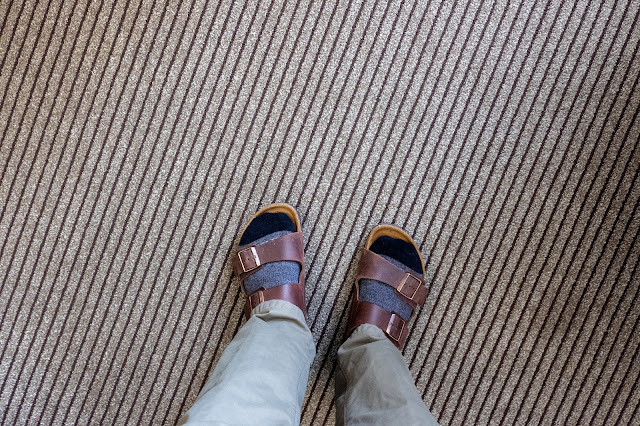 I spent most of the day on Wednesday standing on my feet.
I was wearing pair of dress shoes that "fashion better than they feel".
By late afternoon my feet hurt and they were cross with me for
my selection of style over comfort. I tried to make amends by sticking
my long suffering feet in my Birkenstocks for the rest of the day
which seemed to make them happier. Grudgingly.... 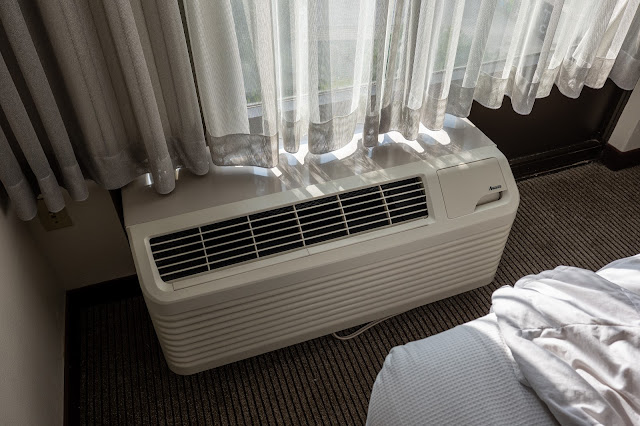 I've come to dislike every permutation of these air conditioners.
They are basically window units. They are located too close to most
hotel beds and as a result the noise is exacerbated.
The alternative, in San Antonio in the Summer, is to turn
yours off and eventually swelter in the heat. 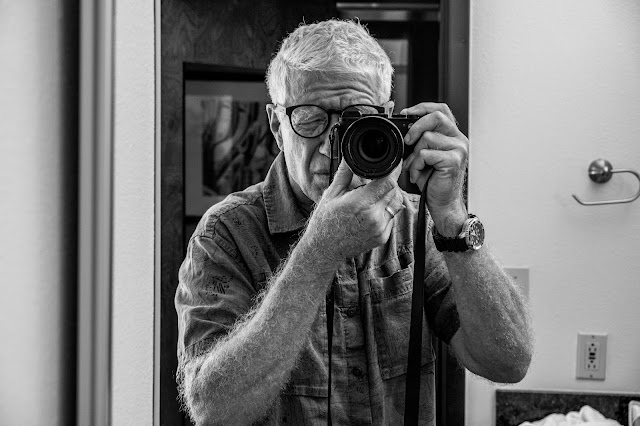 Ah. the obligatory selfie in the mirror shot in the hotel room
bathroom. Proof of existence, I guess.
That man has hairy arms...
Another high point of our quick trip was a fun meal with my sister and brother-in-law at our favorite S.A. restaurant; La Fonda. But in S.A. you have to designate which of the many La Fonda's, all owned by different people and sprinkled across the city, you mean by saying: "You know. The La Fonda on Broadway. Not the one on North Main..." I guess it's like Ray's Pizza in NYC. There's: Ray's Original, Original Ray's, The Ray's Original....etc.
I can only say that if you have not had a puffy taco, and especially the puffy tacos at La Fonda on Broadway (actually a few blocks east on Loop 410) you haven't had one of the absolute treasures of the cuisine.
I had not made the trip between Austin and San Antonio since the lockdowns had been lifted though I used to drive it once a week when my father was still alive. The traffic on the leg coming back home to Austin was insane at 10 a.m. Huge trucks, tons of speeding, engorged pick-up trucks all interwoven with deteriorating sedans crawling along with white knuckle drivers behind the wheels.
Once we made it back to Austin we unloaded our overnight stuff had a bit of lunch and I headed out for a much needed long walk and some quality time with the camera. The same camera and lens I'd been toting around without much satisfaction for the previous two days. The CL and the 18/50mm Sigma. It's such a nice, small, unassuming combination. I sure hope Leica or Panasonic make a new version so I can get another one when I wear this one out. 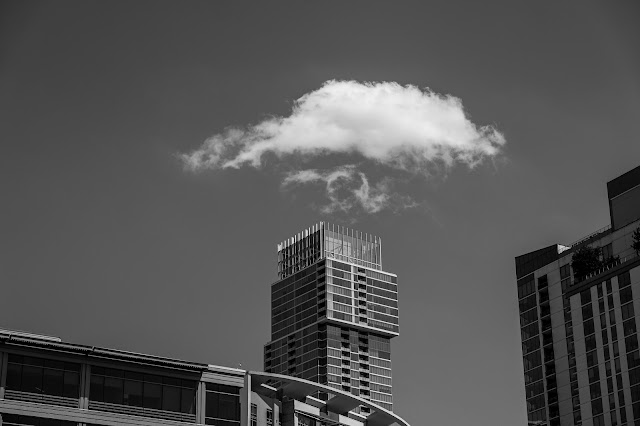 I stopped immediately and photographed this because it looked as if the building was letting off steam.
For some reason Blogger refused to upload the color version. I was going to put them here together but now that I see this one solo I'm happy with happenstance.
Here are some contemporary shots from around Austin. 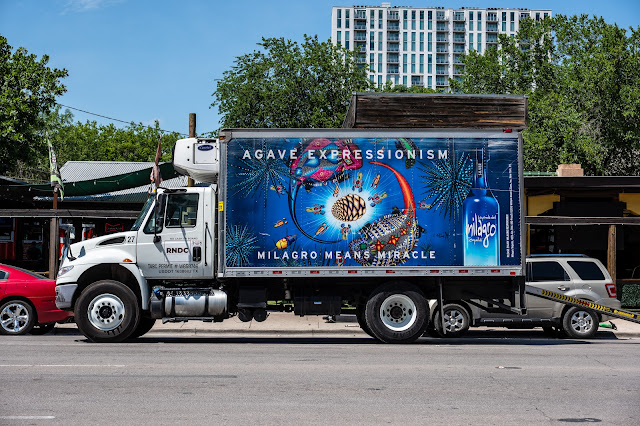 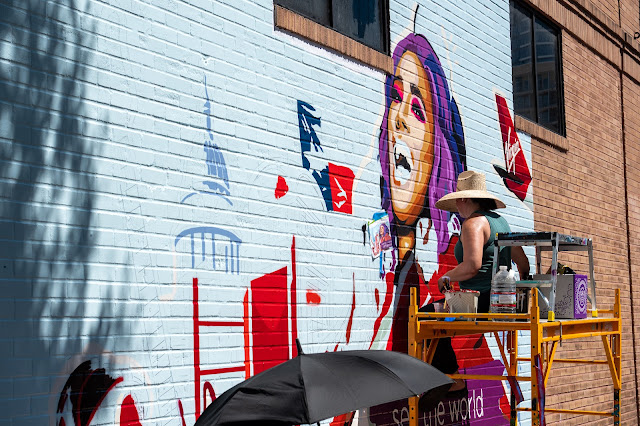 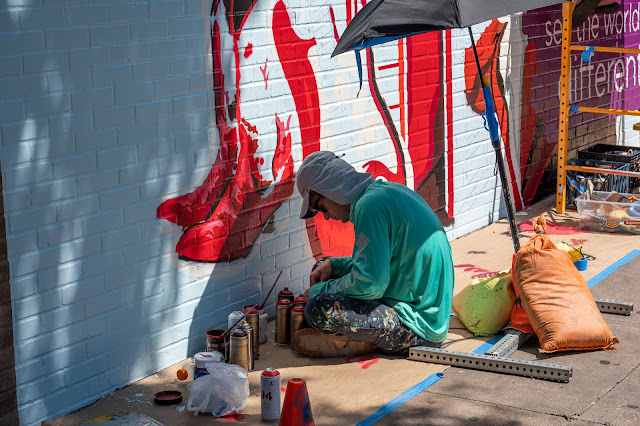 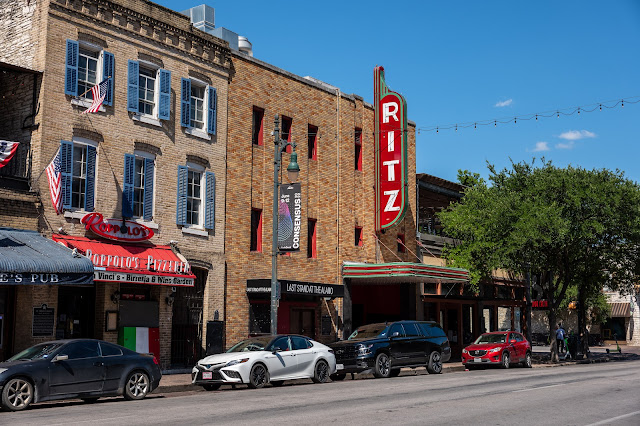 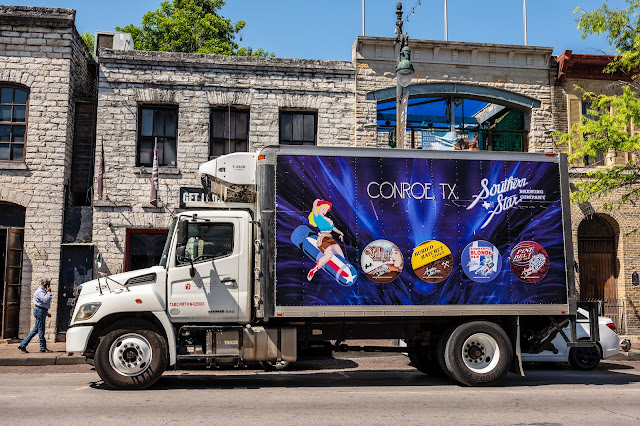 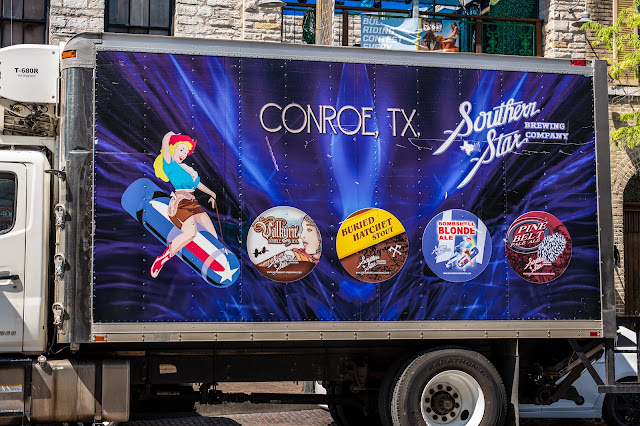 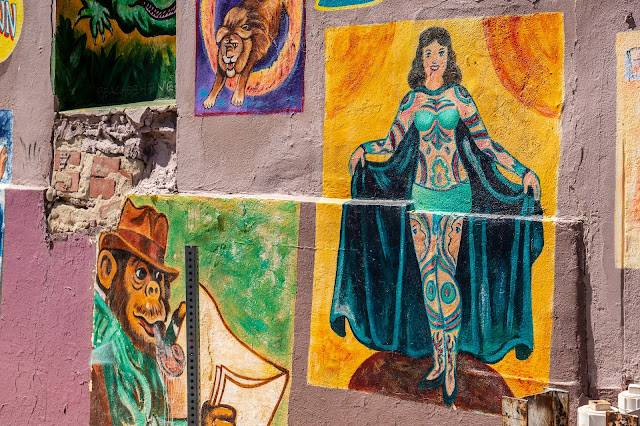 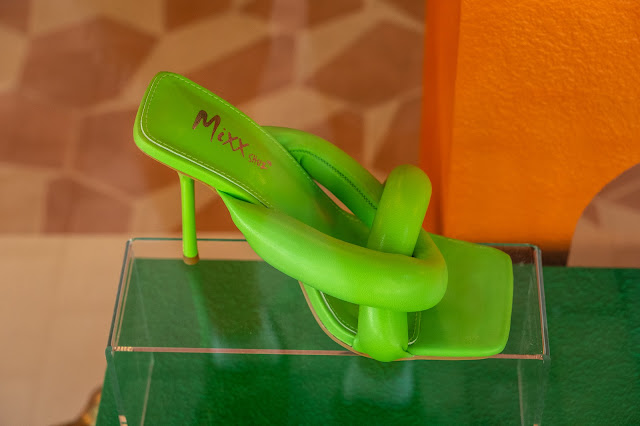 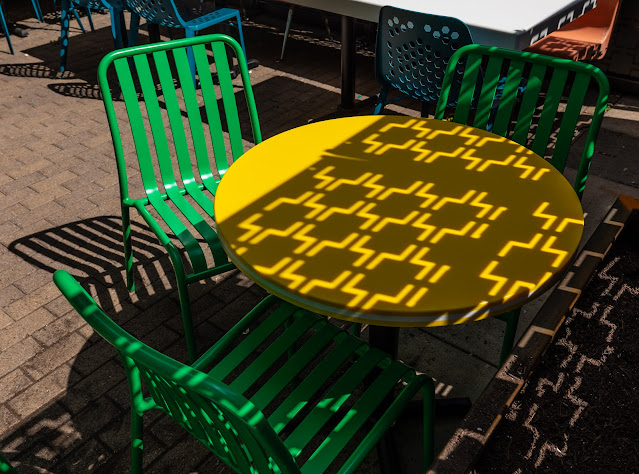 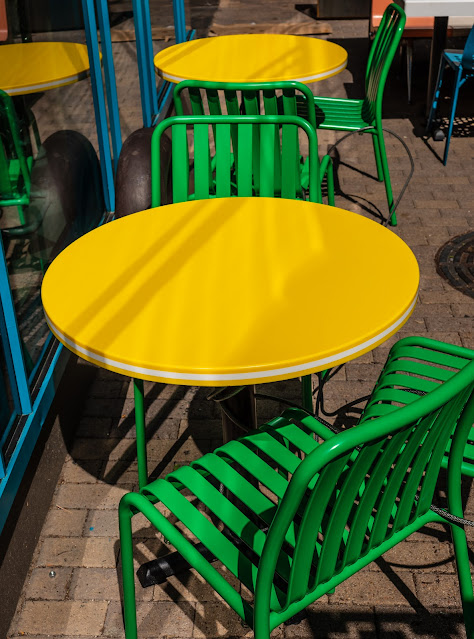 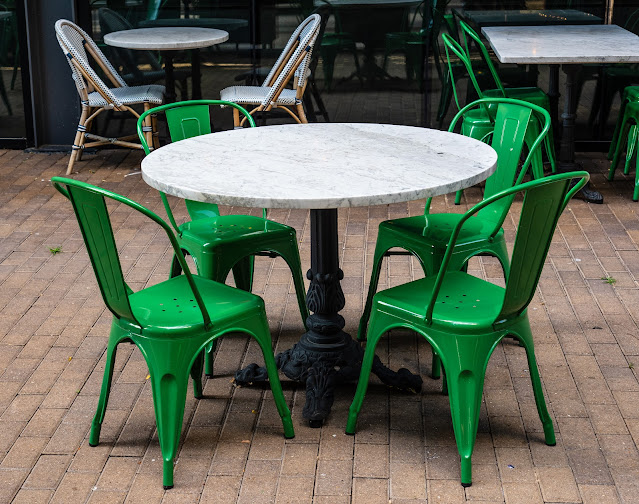 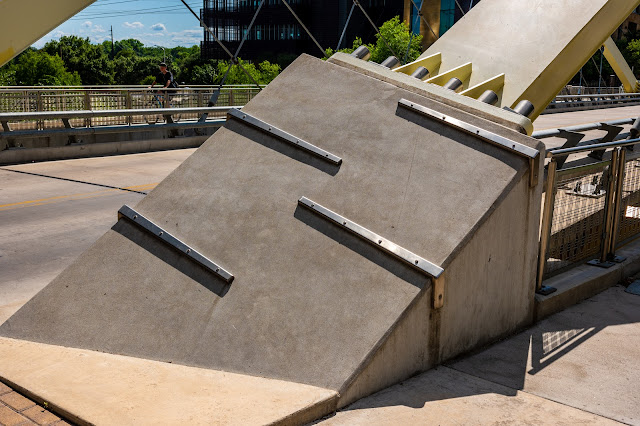 Today I embarked on a completely different mission. I took another step at clearing out the clutter of a long and prolific career. I realized that many of the DVDs and CD-Roms I'd archived and stored were no longer needed. They were just taking up physical and mental space. I cleared out nearly 500 of the little devils today and tossed them, willy-nilly, into the big trash can. What a feeling of freedom that was. So enervating that I immediately started attacking the filing cabinet where I came across a trove of my copies of paper invoices sent to clients over the last 30 or so years....  Thousands and thousands of documents that had not been reexamined....or needed....ever again. Now firing up the industrial shredder... 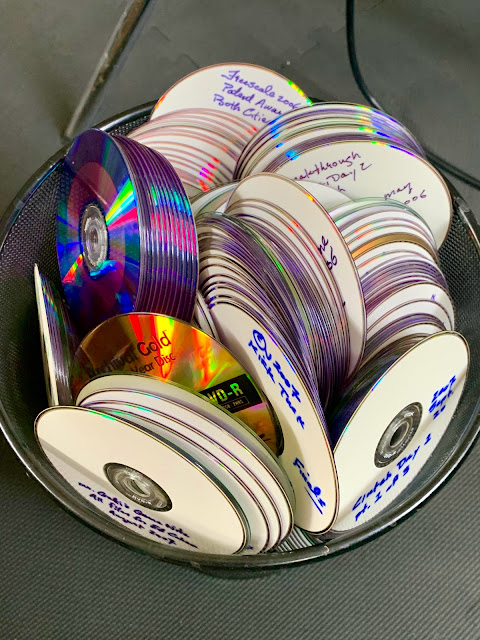 This is one of four trashcan loads I took to the big can.
So nice to bid it all "farewell."
Posted by Kirk, Photographer/Writer at 15:45 4 comments: