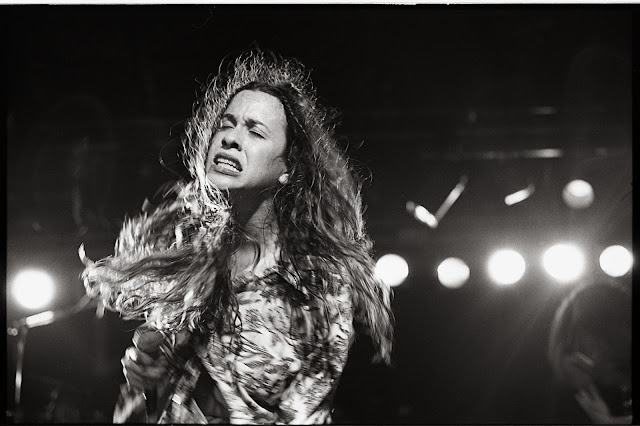 It was a hot, sticky evening in Austin when I went to Liberty Lunch to photograph Alanis Morissette in concert. Liberty Lunch was "old Austin." It started as a down town, out door, music venue back in the 1970's and it thoroughly pre-dated Austin's progressive downtown gentrification.  There was a small pool called, "Esther's Pool," no bigger than a bathtub up near the stage but off to one side back in the older days and one of the first times I went there to hear music the famous poet, Alan Ginsberg was soaking in the tub mostly naked.

For a couple of years Belinda and I had a standing date to go on Thurs. nights to hear a local band called "Beto and the Fairlanes" play very hip sambas, tangos, cumbias and other latin music and we would drink one dollar Shiner Bock beers and dance until early morning. One time we won the cumbia dance contest and took home the grand prize: two cases of Shiner Bock. We threw a party at my house the very next night.

Over time Liberty Lunch got tamed. Now there's a restaurant on the corner called Lamberts and some kind of chocolate and coffee shop where the heart of the club used to be.

On the evening of Alanis' concert the gentrification was already in motion. The owners of the club built a roof over the venue so they wouldn't be at the mercy of the weather. The club that used to cater to college kids and Austin fauna gave way to hundreds of screaming, adolescent girls. The club built a plywood wall that separated the crowd from the stage by about five feet. It was the first time I'd ever seen a physical barrier between the performers and their fans at Liberty Lunch but I guess that was the price of going corporate.

The distinguished members of the photo-press operated in the space between the barrier and the stage.  As memory serves there were exactly three photographers at the concert. It was a time of film and getting fun shots actually required some.....knowledge.

All I needed was one good shot. I was shooting in black and white and I took two cameras to the event with me. One was a Leica M4 with a 50mm Summicron, loaded with Tri-X film. The other was a Leica M6 ttl .85 with a 90mm Summicron, also loaded with Tri-X. I didn't plan on shooting much with the 90 but it sure made a nice semi-spot meter with which to gauge exposure.

Alanis wailed while an ocean of young woman screamed along with their favorite songs just behind me. I took one or two meter readings, set my shooting camera and then fired away. I shot two rolls of film, 72 shots in all, and then I decided I had what I needed and evacuated myself from the hot center of the action. While I like some of AL's music I'm really not a big live music fan and I was ready to give my eardrums a rest.  I headed over to the darkroom to soup my film and then headed home. I remember it as the last evening I went to Liberty Lunch. Shortly after, in the middle of the 1990's, development on steroids came to the downtown area and swept away the feeling and trappings of the counter-cultural Austin we'd known and loved. Liberty Lunch held on longer than the Armadillo World Headquarters but in the end it seems that bare naked commerce always wins over art. Too bad.

I have many casual snapshots from my evenings at Liberty Lunch but for some reason this is one of my favorites.

Posted by Kirk, Photographer/Writer at 14:02 5 comments: