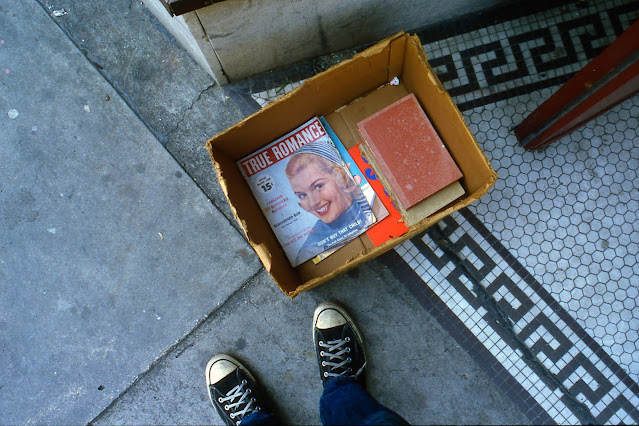 Well. We're heading toward the coldest part of the current massive freeze. It's about to start snowing and the temperatures are starting to head down to a predicted 9°. Swimming got cancelled this morning, not because the pool isn't functional but because there is slick ice on most of the roads in Austin and it would have been unsafe for the coaches to get there.

That's all okay. We're having a fine time settling in after a day of trying to find everywhere cold might get into the house and studio and then fixing it. I've made a few discoveries that seem to be working for me.

The house stays nice and warm. The gas furnace seems to do a great job keeping the house at 70° with lots of umph in reserve. We have the fridge and pantries well stocked and the faucets dripping away with both hot and cold water.

The office/studio is a bit different. I only have a small, oil filled,  radiator style, electric space heater in there and while it's great for our usual 40-50° winter weather, and serviceable for an occasional romp into the 30's, it seems to be overwhelmed by the 20's and teens. The space (about 650 square feet with high ceilings) is very well sealed and insulated, and all the windows are double-paned but without a big enough heat source it gets uncomfortably cold and I'm not yet resigned to working on my computer in a parka with mittens on my hands. The mittens, as you northerners probably know, make it hard to hit just the right keys on the keyboard.

I thought I'd sit for a while, give the situation some thought and conjure up some temporary fixes, and a few things that came to me under duress seem to be panning out well.

At some point, when LEDs became reasonably attractive light sources for domestic lighting I went through and replaced all of the lighting fixtures in the office with them. I put all the older, incandescent bulbs in a box. Today, I went through and changed them all back. Even though there aren't that many they seem to be helping to maintain a more livable temperature even as the cold blows in from the north.

With success on that front I ate some dark chocolate with almonds and sea salt and meditated about heating some more.

The next thing that came to me was the realization that I have four monolights which each take a 150 watt, tungsten modeling lamp. I pulled out one fixture and aimed it under my desk. Now my feet are happy and warm. The glass desktop keeps the heat from rushing toward the high ceiling too quickly and seems to be sufficient to keep my fingers flying across the keyboard. My toes inside my hiking boots are toasty warm.

With success on that front I pulled out another monolight and stuck it into the equipment closet where, incidentally, the water pipes run through the south wall. I've got the monolight about four feet from the back wall and it's doing a good job keeping that small space acceptably warm. I have two more monolights but I think I'll take one into the house because the one space I like to sit and read in is the furthest corner of the living room from a heater vent and closest to a row of double French doors which, no matter how well weather stripped they are, seem to be less sealed than say, a sheet rocked wall.

I think I'll put one of those monolights on a shorty stand and aim it at my feet for that little touch of....ahhhh. Should make some evening novel reading a bit more comfy.

One choke point for me, while coming and going between house and studio, is that the 15 feet of walkway is totally exposed to the ravages of the north and quickly gets icy. The one thing I forgot to stock in yesterday was a bag of rock salt or a bag of sand that I could use to treat the stone expanse. I thought about it in a panic this afternoon when I almost slipped and spilled my hot tea on the way back into the office. Then I looked over on the floor near the studio door and saw five film/photography sandbags. Four of them are 30 pound bags that are permanently sealed by one is a Tenba bag that's about 20 years old and has two compartments which seal with zippers. The bag is refillable. I originally bought it for travel. You could dump all the sand out, stick the bag in the luggage for plane travel and the refill it on arrival.

I filled the bag once, years ago, and never did put it on a plane. But today I unzipped it and found 20 pounds of beautiful, dry sand, just ripe for the spreading. I used the sand from one of the two compartments and now have both a safe passage way between domicile and work and also a reserve supply of emergency sand in the other compartment. Nice.

One more equipment note. You might not know this but if you park your car outside during an ice storm the windshield and back window tend to get covered with ice. I've already been cautioned a few times NEVER to pour boiling water on the iced windshield unless I want to drive in the bracing fresh air without the protection of an intact front barrier, but we've never had to buy a "windshield scraper." I wouldn't even know where to get one... and one day deliveries from Amazon aren't happening in Austin right now so I could not order one.

Not to worry. I have found that plastic lens hoods are marvelous for the task. I try to keep that big, rigid plastic one I have for a 82mm filter size lens that's long since gone on to a different home in the car now in case I need a quick scrape. And it did dawn on me that it might have been a mistake to skip the heated front seats in my new car..... But since I have no talent for driving on icy, slippery roads it's more or less a moot point since I won't leave the property for the next 24-48 hours unless there is an emergency or a half price sale on Leica SL lenses....

The chocolate is keeping me alert, the monolights are keeping me warm, the "professional photographer" sand is keeping me safe, and the lens hoods are keeping my windshield clear. Any other multi-use photo tips for my cold weather edification? They'll be happily accepted.

Ben, who is temporarily housing with us these days, is cooking his famous (and insanely good!)  Pasta Carbonara for dinner tonight, along with a fresh green salad. Belinda and I are making lava cakes for dessert. There's a nice Cabernet Sauvignon for the main course and a bottle of Prosecco for the desserts. Seems like we've been able to engineer a fun Valentine's Day after all. And the howling wind outside adds just a touch of danger and excitement to the evening.

Hope you are staying warm, happy and engaged in your own homes. I know the weather is worser and worser (I know that's not correct!) the norther and norther you go so my best wishes go out to all of you north of us.  In a week it's forecast to be back in the 70's here. For once I can hardly wait.

Kirk out. (No longer shivering at the keyboard. Oh the sacrifices I make....).

Posted by Kirk, Photographer/Writer at 15:21 29 comments: