A small collection of the photographs of the Berlin Wall as I saw it October 2013. Remembering the fall of the Wall today. 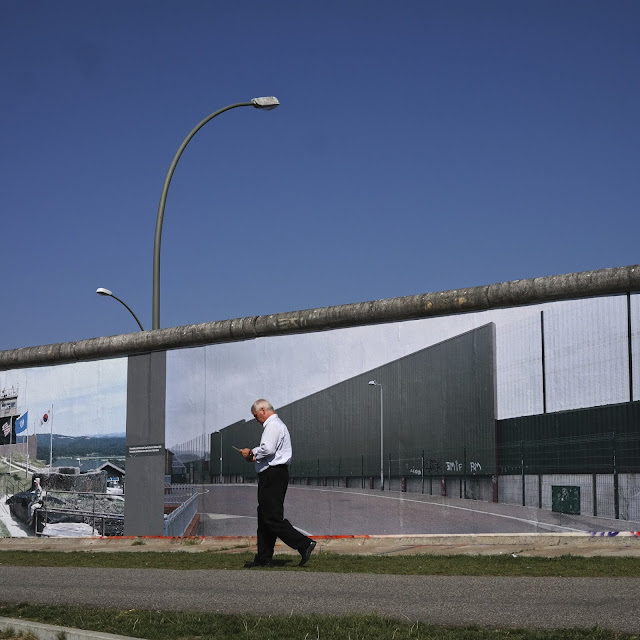 The parts of the remaining Berlin Wall that I got to see were covered with
commissioned, painted murals depicting fascism and repression around the world.
It's a somber place. 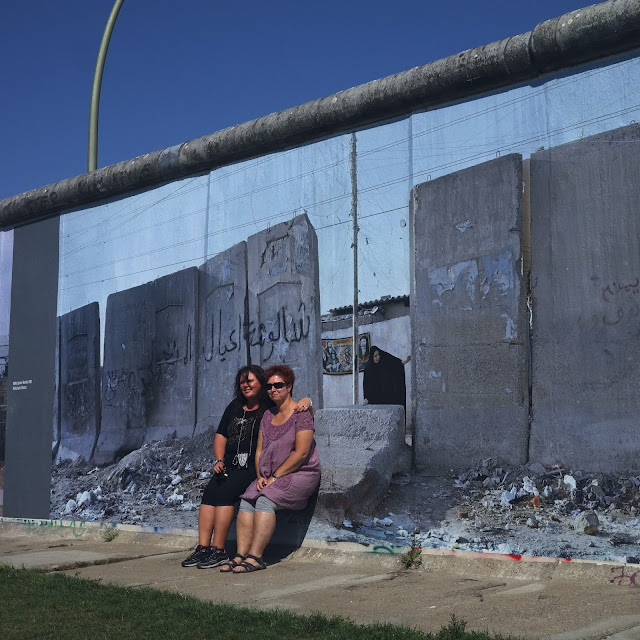 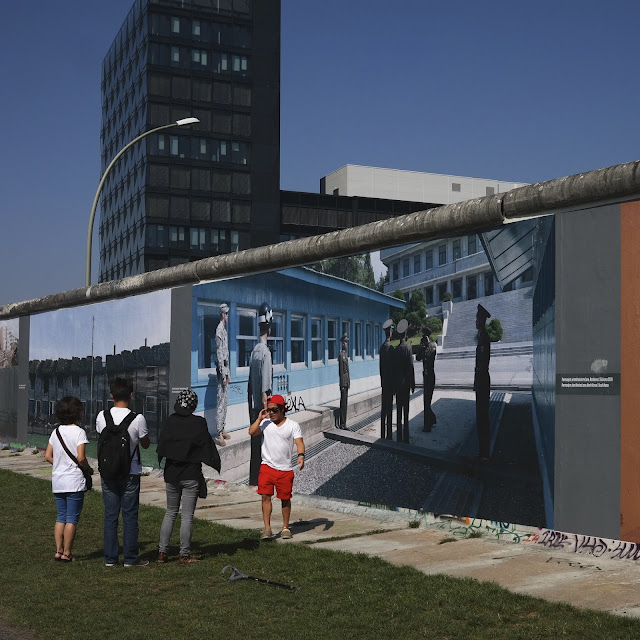 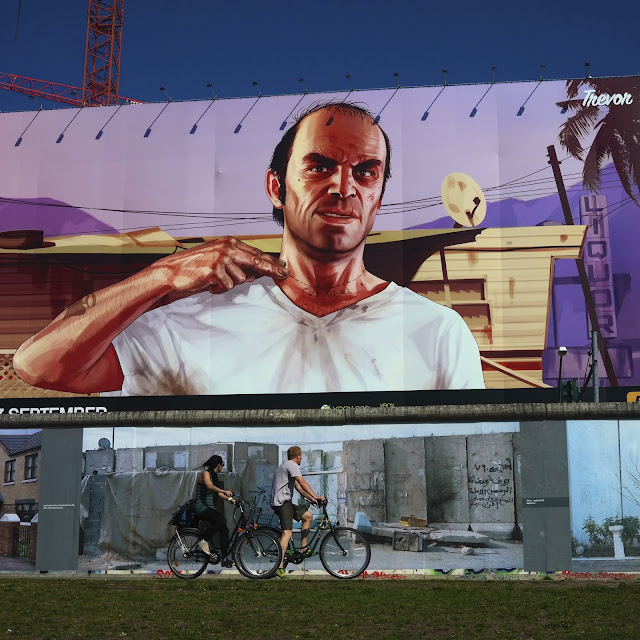 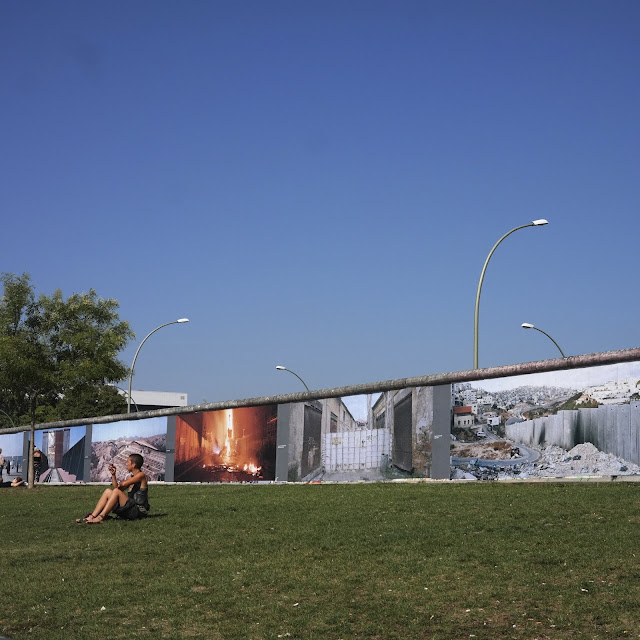 Out for a walk on Sunday. Critiquing a major corporation. Getting some vitamin D. Going super-wide to clean out the cobwebs... 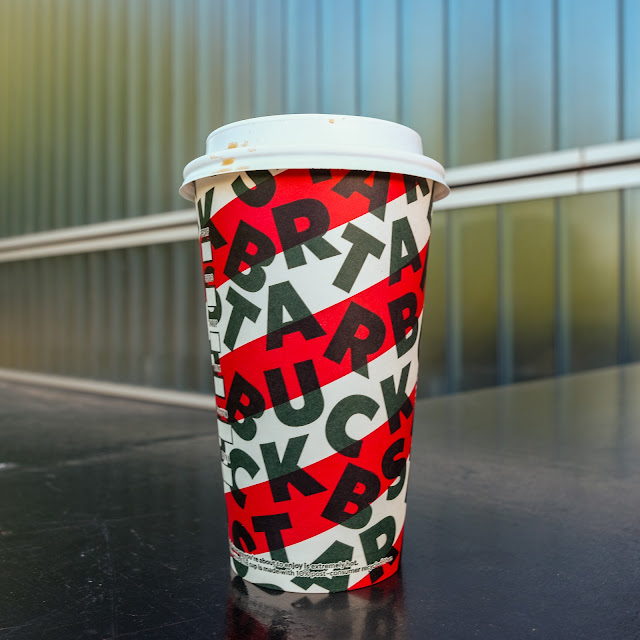 Let's start with this hideous cup. It's this year's "holiday" cup from
Starbucks. While Starbucks may be putting local coffee shops out of the coffee
business they are certainly not going to make a dent in the businesses of
any decent graphic designers with this visually cacophonous monstrosity.
Yes. Yes. I can see that the letters spell, "Tuck" right across the middle of
the cup. But it's not what I had in mind when I suggested they partner with
a world class photographer....

Do you think this cup design is as visually repulsive as I do?

Other than the "crimes-against-humanity" cup design imbroglio it was a really nice day today. The weather was about as perfect as nature could deliver and the city was brimming with people walking, running, scootering, biking and coffee slurping outside. I saw a larger than usual number of people strolling about with cameras including one very serious looking couple (each around my age) who were both sporting Leica M series digital cameras. Fun to see some Leica love out in the wild instead of just represented as the butt of jokes about camera pricing on internet sites with jealous vloggers.

At one time I was seriously, intensely into Leica M and R cameras and used them for many years as the primary "small" cameras in my business. That came to a screeching halt with the early ascendence of digital but I may venture back into the fold given all the fun and breathless press the new Leica SL2 is getting. If you use cameras for anything but AF-C oriented work you'd probably love the SL2. It's pricy but beautifully and minimally designed. In the nicest sense of the word, "minimally."

My attraction is less to the new camera and more focused on the lenses. I've been reading about the new Leica 75mm f1.2 APO (real APO, not advertising APO) lens and every once in a while I have to stop and wipe the drool off my keyboard with a lens cleaning cloth. According to one of the engineers at Leica this might be the highest (best? most best?) consumer lens ever made.

I say, "consumer" lens because the various professional cinema lenses are much more expensive but might just be a bit better spec'd. At $4,795 I'm hardly running out the door to acquire one of the 75's but from time to time, when I'm feeling maximum hubris, the thought of ownership does cross my mind...

The nice thing about my recent acquisition of two Lumix S1 bodies is that they are part of the whole Leica/Sigma/Panasonic L Mount Alliance and all the lenses are usable on all three of the manufacturers' bodies without caveat. If all one needs is a brilliant 24 megapixel sensor and a very, very well engineered body then the Lumix stuff makes perfect sense. And, with the cost savings over the Leica SL2 camera one might just be able to swing one or two carefully selected Leica primes. Or save for retirement....(an over the shoulder reminder from the in-house accounting department). But I say, "Why not both?!"

You would think after all the nonsense I just typed above that I was out today with one of the S1 bodies and whichever Lumix lens I considered to be most luxe but, no. When I stirred today, finished my frittata and my coffee, gobbled down my blueberry waffle, brushed my teeth, my one thought was on getting out today and going with a wide angle prime lens to recalibrate away my compulsion to shoot everything with a 50mm equivalent. I chose the Fuji X-T3 (who needs image stabilization on a bright, sunny day when using a very wide angle lens?) and the 14mm f2.8 Fuji lens. I was less averse to it than I thought I would be. It's a wonderful little lens. It's got very low distortion but acres of vignetting which are discreetly handled by the in-camera software correction. And the combo of body and lens make a nice, small, unobtrusive package to carry around on a two hour walk. Plus, the files out of the X-T3 are hardly lacking... 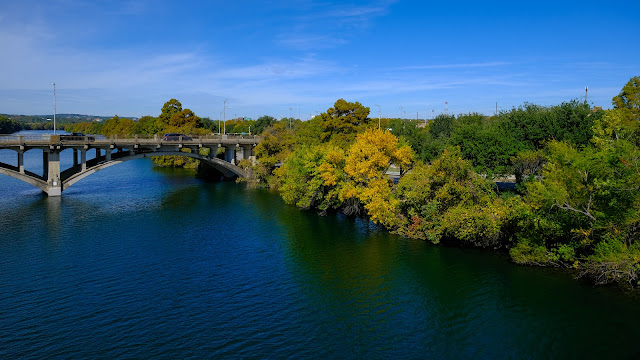 The look of the shoreline after storms have blown out all the micro-trash from the sky.
Lady Bird Lake in downtown Austin. 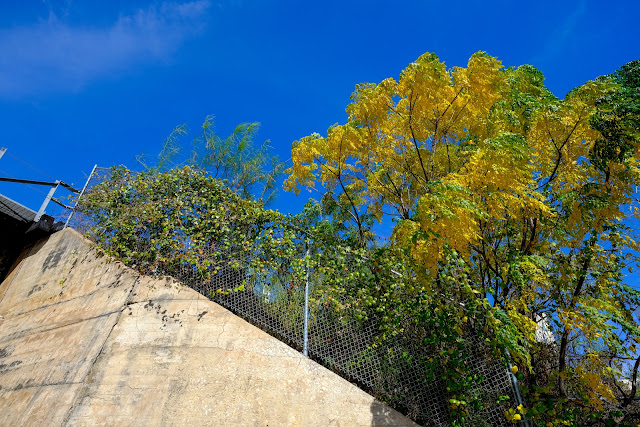 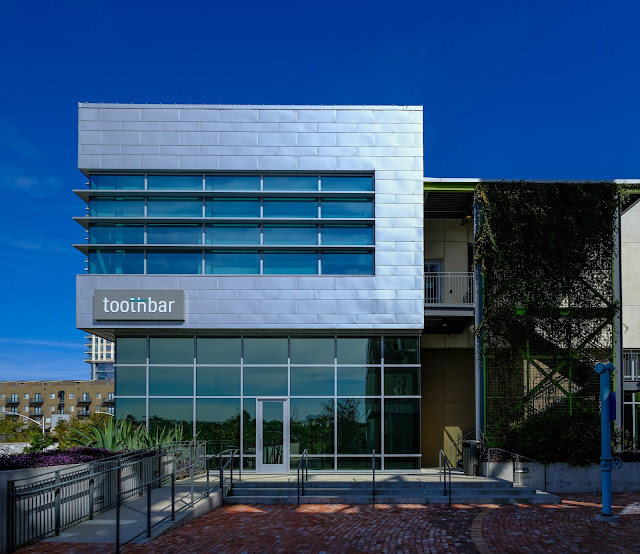 A millennial/hipster urbanist dentist office. Way to cling to the highlights! 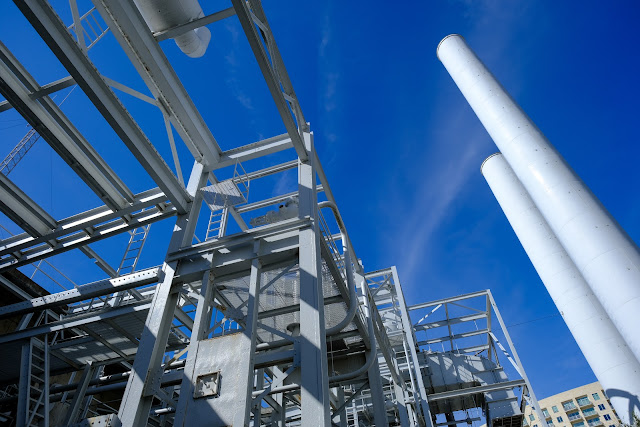 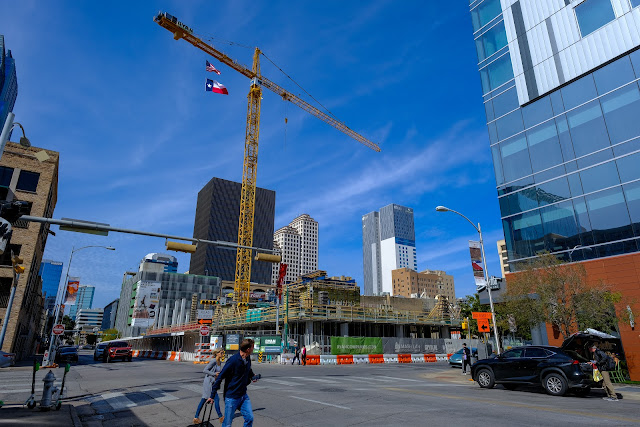 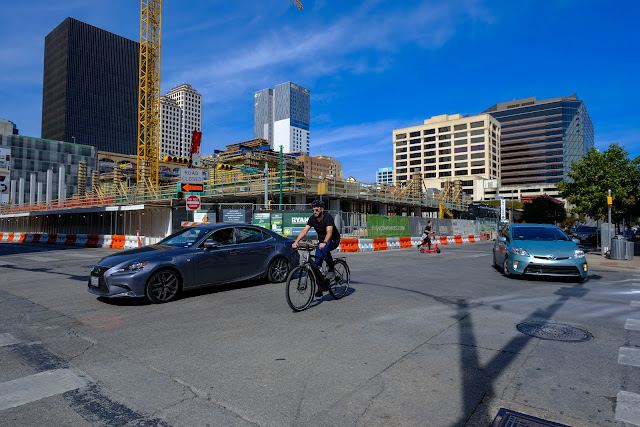 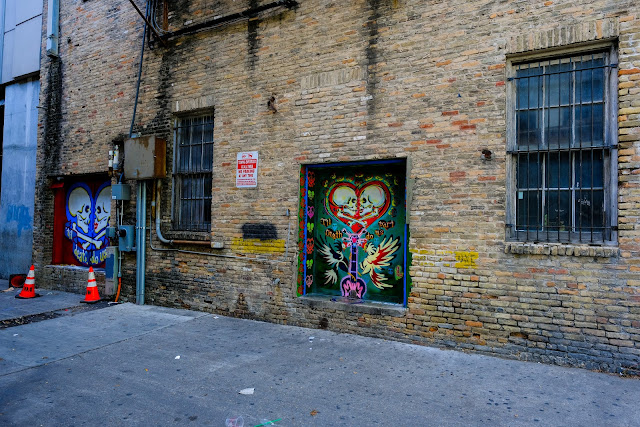 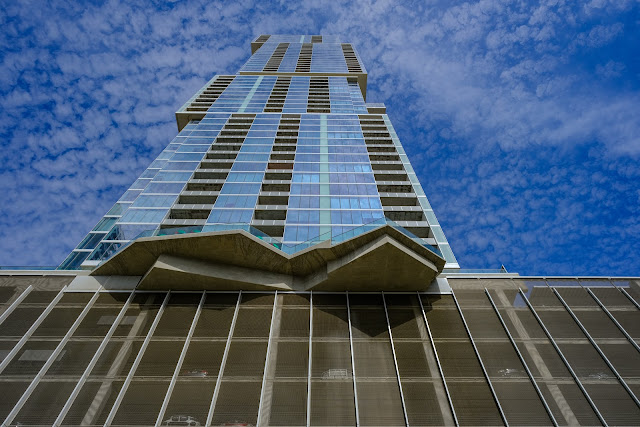 I think they've finally put the finishing touches on the "Jenga" building. 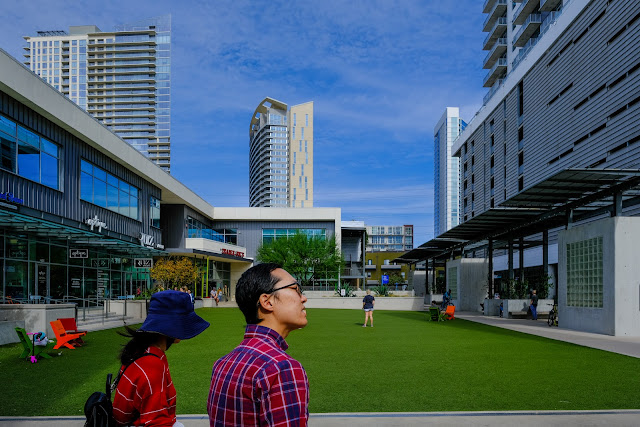 Yes. Fake grass. So fake that everyone knows it's Astro Turf but the dogs.
Odd to me that people bring their dogs here and the dogs do their "business"
on the turf. But other people bring their kids here and play on the same turf.
Modern life in downtown. Hope someone is power washing the landscape every night. 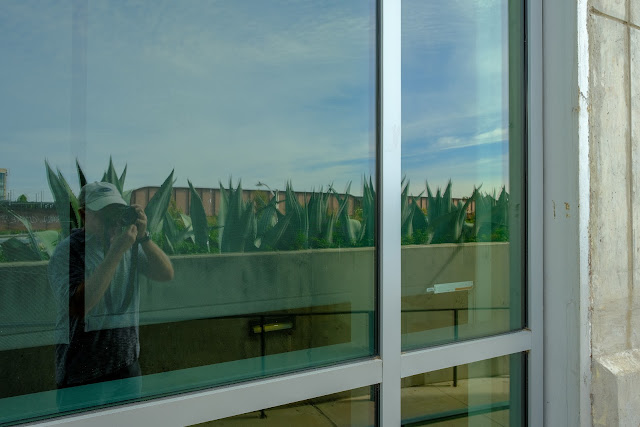 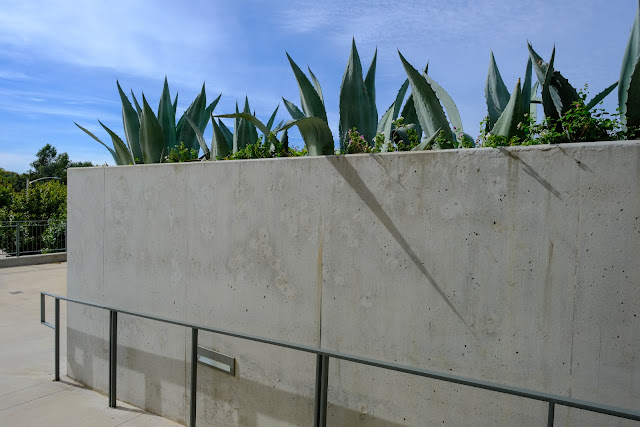 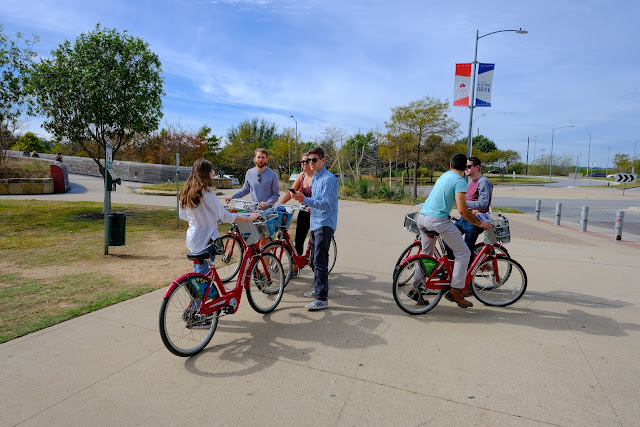 Uh oh. Is everyone sharing the sidewalk?
Bike rentals should include helmets and etiquette instructions.... 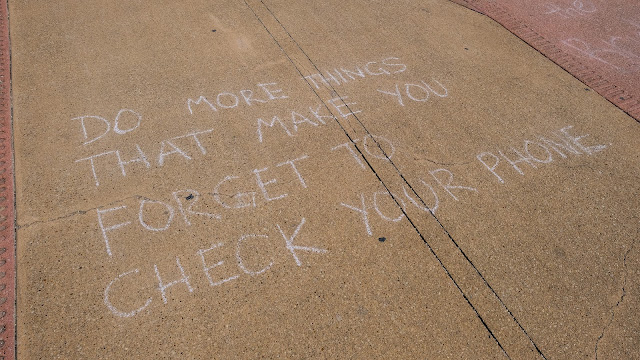 I seem to be recovering my work equilibrium and am actually getting excited again about various projects coming into the company. I've also been casting around for some young people to work with. Met one today who asked to shadow me on some projects. We'll see, potentially, how this mentoring thing might work out.

Much work coming up in the next few weeks. Marketing photos and possible video projects for three theater productions, a gala this Thursday at the Four Seasons Hotel and a fair number of private portrait commissions (seems like I acquired that 85mm f1.4 lens just in time).

Hope your pre-holidays are going well. Keep up the high quality blog reading. Knowing you are out there reading always serves to give me the desire to write.

Keep swimming or running or whatever active thing you do all the way through the holidays. Don't let anyone disturb your schedule for work or ancillary family stuff. There's always time to help out after workout!!!


Posted by Kirk, Photographer/Writer at 17:56 9 comments: