Sometimes available light is just fine with me. 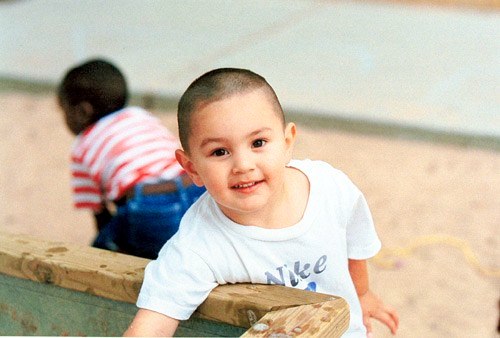 I was doing a brochure for a non-profit here in Austin. The assignment was to photograph kids in an enrichment program. At a certain age most kids are cute. We were trying to make them look hyper cute so that even crusty old curmudgeons would think twice before cutting funding for the program. Oddly enough I was shooting with a Pentax 6x7 film camera and color negative film. I might have wanted some fill flash but the mechanics of the large focal plane shutter on the "Pentax on Steroids" meant that the fastest sync speed was 1/30th of a second.

I opted to "zone system" my exposure by over exposing the color neg film by a full stop and having my lab pull the development time by 20%.

As you can imagine, four, five and six year olds on a playground move at a speed that would take a NASCAR driver's breath away. While it may seem impossible to those raised on high speed autofocus and built in Image Stabillization we routinely manually focused fast moving subjects while hand holding fat cameras back in the old days.

Was there a reward for that? I can't say for sure but I know I really like the way the depth of field falls off just past the front little boy's head. I know I had to edit through many fewer frames to find keepers and, I know that my arm muscles were toned.

I shot this project with two of the Pentax 67 bodies. A 150mm 2.8 on one body and a 55mm on a second body. One old incident light meter around my neck. No lighting. No assistants. No entourage. Just pure photography.

Had to get it right in the camera though because we went straight to the print.

One of my favorite kid photos.
Posted by Kirk Tuck, Photographer/Writer at 17:47 9 comments:

I don't like the gratuitous use of rim lighting or halo-like back lighting in photographs even though I am guilty of it from time to time. I was photographing an executive at a company called RackSpace in San Antonio for Accelerate Magazine (published for AMD) and I was in the throes of writing my first book on lighting ( Minimalist Lighting: Professional Techniques for Location Photography ). I wanted to show readers how much you could do with just a few battery powered strobes and this seemed like a fun place to start.

I'm using a small softbox to the right of the frame to provide main light for my subject. I've got a small flexible fill reflector over to the left of the frame for fill. It's being illuminated by a light set a 1/4 the power of the main light. I have two lights, zoomed to their widest reflector settings on the warm wall in the background and a fifth light aimed at the back of the subject's head as a separation or halo light. I thought it would be useful in separating the tone of the wall from the similar tone of his face.

There is much that can be done with small lights, and even though I've changed systems from Nikon to Olympus I try to keep my lighting bag full of small, battery powered flash units that can be used maually with power set in ratios. Currently I'm using a mix of Metz and Vivitar flashes. The Vivitars have built in optical slaves and a slave setting that overrides the energy saving programming of the the flash. This makes them great as secondary flashes for things like back wall washes and accent lights.

The photo session included a number of shots taken around the Rack Space facility and was well used by the magazine.

After writing the first book I had a reaction to all the battery powered, small light stuff. I took a hiatus and embraced my big, clunky, powerful Profoto lights for a while. My recent system change has re-energized my interest in the small flashes. I'm currently having fun figuring out how to conquer Texas sun with just a handful of Metz units. More details to come.

P.S. The Commercial Photographer's Handbook should start shipping from Amazon this coming week. I'm thrilled with the printing of the book. The colors are wonderful.

Posted by Kirk Tuck, Photographer/Writer at 09:47 No comments: