A Total Immersion Week with the Panasonic GH4. Or, Kirk Does the Math.

It would seem that the big news around here is the launch of the novel, The Lisbon Portfolio. But as much as I wanted to sit behind the computer and send e-mails to everyone I knew announcing it, the day after our publication on Amazon's Kindle Store I was on a Southwest Airlines flight heading to Denver Colorado to work as the event photographer for what has become my favorite show. It's the RLM Math Conference at which Inquiry Based Learning is discussed in depth by math teachers and professors from all over the country. I spent Weds. through Saturday soaking in the math gestalt in a wonderful building that was designed by the architect, I.M. Pei, back in the 1960's. And I'm not kidding, I had a blast.

But to stay on photo topic part of my reason for being happy was that this was my first chance to deeply immerse myself in shooting a full on event with my completed Panasonic GH system. I shot well over 4,000 images and the bulk of them were done with the new GH4. The rest were created on two different GH3s. And I will say that spending a cumulative 20 hours with one type of camera in your hands is a wonderful way to find out what you like and what you don't about the system....

But first a photo that the Panasonic marketing people should really enjoy: 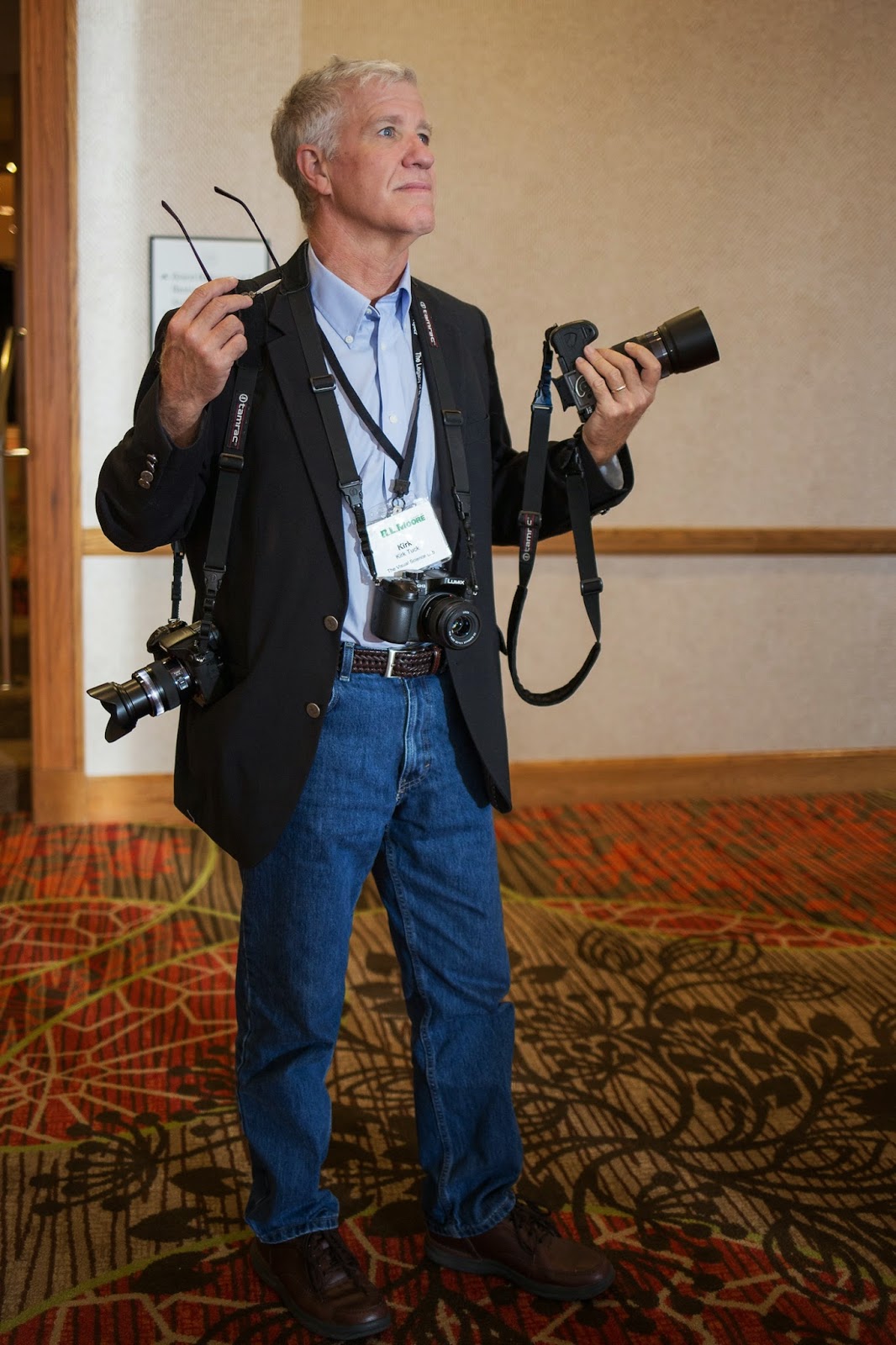 The image above is a fair representation of how I equipped myself for my time in Denver. Three cameras with three different lenses, extra batteries and a small flash in the pockets of the jacket. Totally equipped without a camera bag in sight....

Let me set the stage: The project was to cover a conference about Inquiry Based Learning in Mathematics. My brief was to document all the "main tent" sessions, the dinners and the social components of the conference. But the most time intensive part of the job was the need to photograph presenters presenting in five different locations, concurrently. An almost continuous cycle of parallel sessions that lasted almost all day long each day.

The conference took place in the I.M. Pei Building of the Sheraton Hotel complex is downtown Denver, Colorado. That's nice for me since Denver is quickly becoming one of my favorite destinations in the country. It's only two hours from Austin by direct Southwest Airline flights and the idea of embracing 50 degree weather each morning with coffee and a warm croissant in hand is enticing. Especially when the humidity and heat kick in for the Summer here in Austin...

All photo jobs are different and all the parameters are different as well. For about eight hours each day the conference ran the parallel sessions which lasted about 40 minutes each. The classes, filled with academic mathematicians were spread out all across one large area of the conference center. I would start the cycle by photographing the speakers and activities in the main ballroom and then move on to classroom A, the B, then C, and finally classroom D. I shot a lot of frames because I was trying to capture good expressions in which  subjects' eyes were open, hands were gesturing in a natural way and peoples' mouths looked as though they were caught, mid-sentence, saying something really bright and insightful. The important idea here is that I did this circuit, from ballroom to class to class a dozen or more times each day and I packed gear with a conscious thought to keeping my load of equipment as light as possible.

I did the same conference (here in Austin) last year with the Sony a99 and Sony a77 cameras along with some giant lenses (the five pound 70-200mm 2.8 comes to mind as a particularly painful thing to sport around on the front of a camera...) and a large camera bag packed with all kinds of stuff with which to support the "full frame mystique." The gear was heavy and many times the limited depth of field worked against me as I attempted to shoot in a documentary style using available light for small groups of people.

This year (as you can see above) I brought two Panasonic GH3 camera bodies and one GH4. (I wish I could wave a magic wand over them and convert all the cameras to GH4's....). For most sessions I actually carried only two cameras: the GH4 with the Panasonic 35-100mm f2.8 X zoom lens and a GH3 with the 12-35mm f2.8 X wide angle zoom lens. With one camera on each shoulder and a third sometimes draped around my neck (GH3 with 25mm f1.4) I barely noticed the weight or the bulk of the gear.

Two things to mention here: I was happy to shoot wide open with any of the three lenses as they perform very well at their respective maximum apertures. This is something I was rarely able to do with my previous cameras since the edges and corners of the lenses for the larger formats were never as well corrected when used at their maximums. Lens designers have pointed out for years how much easier it is to design well corrected lenses for smaller formats----at least theoretically.

The images I'm seeing today in Lightroom are sharp and well constructed and the extra DOF, even with the lenses wide open, is welcome. This selection of lenses really does prove to me that the smaller geometry of the sensors was quite welcome. It meant that, in most cases eyes and ears were both in focus but I could still drop backgrounds out of focus with the longer focal lengths of the 35-100mm lens.

One of the way I kept the file management manageable was to shoot high quality Jpegs instead of Raw files. My take on the real, current reason to people prefer Raw files is that most people don't take the time to do really good white balances while they are shooting! Seriously, if you shoot without getting the color right--in Jpeg or raw-- correcting in post after the fact makes a huge negative difference in both noise and exposure accuracy.

While the effects are evident in both kinds of files (in my experience) it's obvious that there is less potential to make large corrections in Jpeg files because each color correction step introduces complimentary color shifts somewhere else in the spectrum (or usually at multiple points along the color distribution) as well as causing non linear shifts in each of the three color channels.  And some of those non-linearities are not correctable.
Read more »
Posted by Kirk, Photographer/Writer at 16:49 17 comments: