Nearly four year old GH5 versus Nearly new Lumix S1H. Which is the more useful video camera? Well, I guess that all depends on what you're shooting... 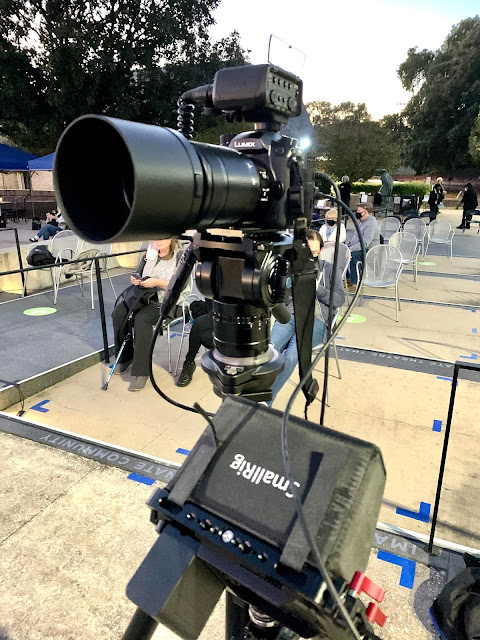 This was my main/follow camera. It's the GH5 outfitted with the new (to me)
50-200mm Panasonic/Leica lens, the Panasonic audio interface with
a feed from the main sound board, and an Atomos Ninja V monitor
which allows me to punch in to 1:1 or 2:1 while shooting to
fine tune focus. Something you can't do on the camera's own monitors.
A project saving accessory. And yes, it works with stills. 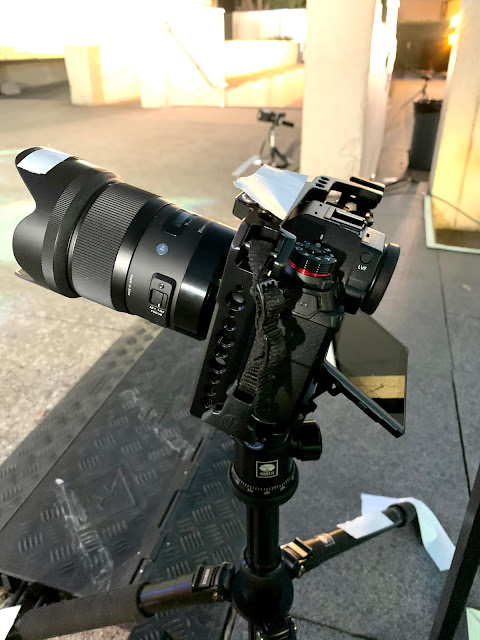 This is my camera used looking straight into the main stage. It's an S1 (with the upgrade) outfitted
with a Sigma 35mm Art lens and sitting on a Sirui tripod.
Do you see all the white tape everywhere?  It's on the tripod, lens, on the camera and
on the lens hood That's so crew doesn't miss seeing the camera
as they move through the set and run into it. The camera is parked next to a railing
but you can never be too careful. 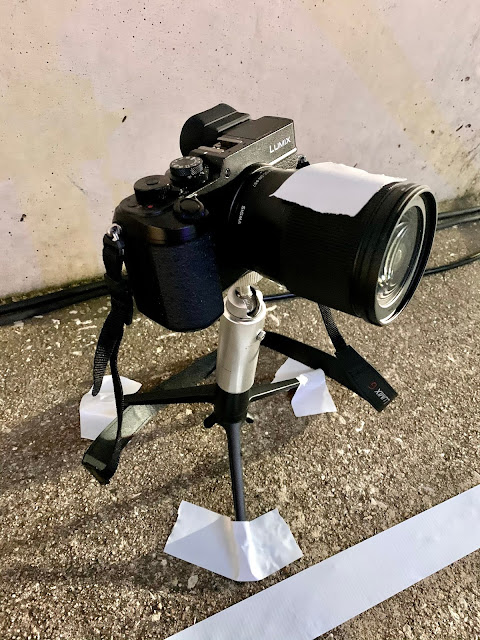 This little pup is a Panasonic GX8.
I've outfitted it with a Sigma 16mm f1.4 lens
used at f5.6. It's sitting on a Leica table top tripod
and that's sitting on the ground just next to a wall. On the far side of the wall
is the audience area. In front of the camera, at a 45° angle, is
the main stage. I just wanted something a bit different
and when I discovered that the "old" GX8 could
shoot 4K (in M4P) for an unlimited time I pressed it into service.
The files actually look great!!! 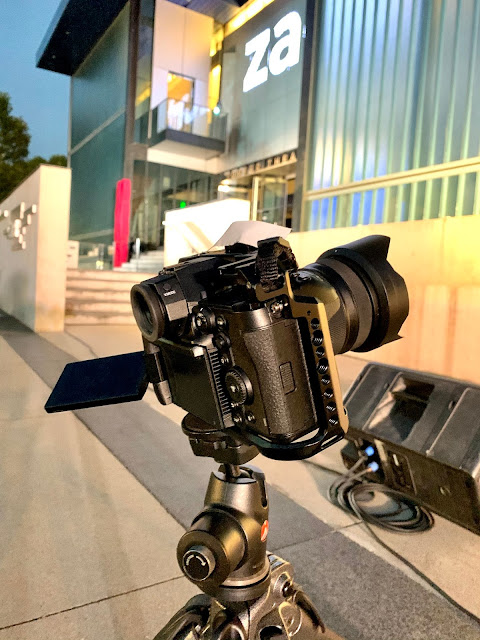 Finally, I'm using the S1H with a 24-105mm S lens as
the wide camera for the secondary stage area.
This camera got demoted when I discovered how good
the GH5+50-200mm lens could be.
It did a great job though.
Sitting on top of an old Gitzo tripod and a Manfrotto ball head.
One thing I did differently last night: There had been a lot of lighting changes since I last shot the show here but unlike a highly rehearsed and practiced stage show the lighting doesn't change during an individual performance of these smaller productions. I remembered to take along a favorite incident light meter and I carefully measured the actual light in the areas covered by all three of the fixed position cameras and then set them very exactly. The result is a bunch of technically better files to work with today.
On the main/follow camera I fine-tuned the exposure with a waveform reading on the screen of the Ninja, setting darker skin tone to 45-50%. It also produced technically perfect files for our use. The meter was much better than eye-balling stuff. And I can't remember the last time I saw a professional whip out a meter and use it. I bet I looked so cool. (That's a joke --- a program note for visitors from the humorless site).
So, "No good deed goes unpunished." Yep, we finally nailed the technical aspects of perfectly shooting a live stage show. The theater uses the finished, edited videos to make some extra cash by offering them behind a paywall on Vimeo. This should have been the video for this particular production. But, as fate would have it, the female performer was having some issues with her voice and two of her songs were scrubbed at the last minute. The creative team punted by adding a song each for the two male performers. I'm sure though that the artistic director had/has the original playlist burned into his brain and we'll be shooting this show again in two weeks when they hold it over for a three week run before Thanksgiving. Dammit. I was so close.
Funny. We say that cameras are just tools. But then we expect one camera to do everything. Like hammering framing nails with a Swiss Army knife. I really do believe that cameras are visual construction tools and like every other endeavor we do need different tools for different applications. Few people would be obtuse enough to try and put a four by five inch, technical view camera onto a drone. You might not want to shoot highly detailed material destined for monster big enlargements with an iPhone 5S camera. The fun thing about doing artistic work is that you get to choose the tools (plural) with which you'd like to work. And you aren't limited to having only one.
On the other hand, last night sure would have been interesting if all four of the camera had been GH5s...
Posted by Kirk, Photographer/Writer at 11:11 10 comments: