The Sony A7s. Writing about this because it's interesting. Not because I want one. Yet... 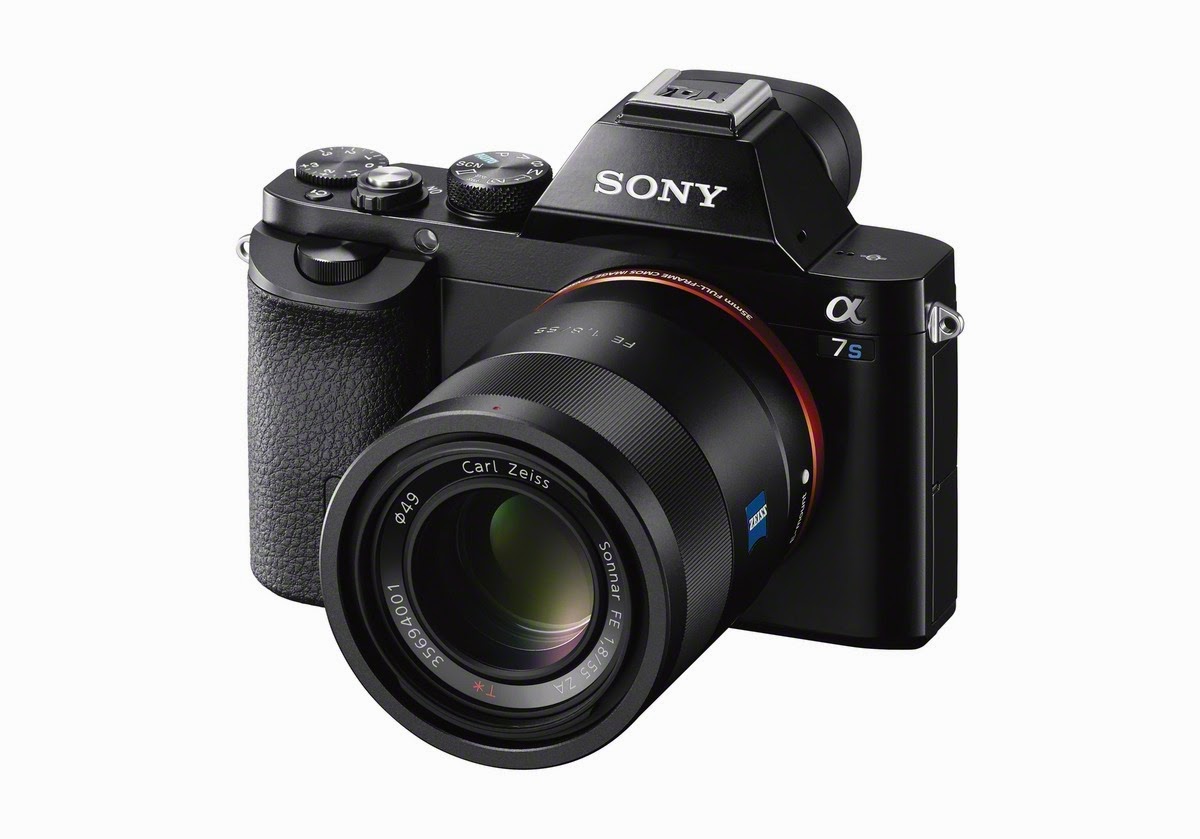 Sony announced a new A7 model at the NationalAssociation of Broadcaster's show today in Las Vegas. The camera is called the Sony A7S and it will be a very interesting product for people who: a. Shoot with the Sony Nex FE system. b. Think they might want to shoot nice video. and, c. People who think they might like to shoot under very, very, very low light conditions. After a very thorough inspection of the specs it seems obvious that Sony has still (like the A7r) found very interesting ways to take out their corporate handgun and shoot again and again at their own feet.

What is interesting about this camera? Well, for starters it contains a brand new, full frame sensor that  allegedly does what many have been calling for years---it promises bigger, lustier pixel wells for much better (lower noise) high ISO performance. Instead of 24 or 36 megapixels you can step up to 12 megapixels spread across a 24 by 36 mm sensor. The advertised high end of the ISO range is in line with the newly announced Nikon D4s at over 400,000. Yikes!

If you keep up with video production you probably have heard that a big issue with using traditional DSLRs like the Canon 5D3 and the Nikon D4s or D800 is having to get all of the information off the huge sensors and condense it down quickly into the much, much smaller video files. The cameras do this by binning and by using a line skipping scheme. The issue has always been the image processing pipeline which is optimized for the creation of huge image files with HD video as an afterthought. The problem with the current downsampling schemes is that the files generated don't have the detail they could and are no match for camera with smaller output sensors which are also optimized to be able to dump their entire frame of information without the processing to downsample.

In Canon's professional video line cameras like the C100, C300 and C500 use sensors that have limited the megapixel count to nearly the exact count of 4K HD. These cameras can write frames to memory without too much processing and with no downsampling which allows them to have faster frame rates and to do away with the image degradation of line skipping. Sony is following in their footsteps but for the first time introducing this strategy in a consumer camera. A camera that is affordable to many who want to stick a toe into 4K video with a relatively good assurance of high quality.

One of the benefits of the bigger pixel wells is something more important than high ISO performance, it's a much wider dynamic range. Rumor has it that this sensor will compete with some of Sony's professional cameras when it comes to dynamic range meaning that the camera will have up to 13.5 stops of usable range. The gap between consumer Sony and consumer Canon just got wider....

I was amazed to find that the camera will also come with film maker profiles and the ability to use S-Log curves that also protect highlight detail. In essence, aside from the lower resolution, this will be a noon time, bright sun, desert, swim pool in summer champion. Sounds good so far, right? So why would I say that Sony has their good ole Colt .45 loaded and aimed once again at their own big toe?
And what does this new competitor mean to all of us who've been waiting with bated breath for the Panasonic 4K camera? Will we now drop those Panny plans and rush back to the Sony camp?

Well, let's get logical and read into the specs with reckless abandon.

First off, the big one: Technically you can't use the stock camera to shoot 4K to the memory card in the Sony A7s camera. Wait, I don't get it. This is being touted as Sony's consumer foray into DSLR 4K video but the camera won't record 4K video? Nope. Yep. The camera will record 2K video in a 4:2:2 configuration which means wonderful 1080p files but to actually record 4K you'll need an outboard digital video recorder to make that work. You can pretty much plan on adding at least a thousand dollars and a lot more complexity (and weak, flex points) in production to get 4K from the camera. Hey, be careful because you'll have some wires sticking out and you'll need to attach that new digital recorder somewhere.... So, technically, yes the camera will record 4K video, just not to the internal card or any other inexpensive modality. Yikes! That's big news. The Panasonic has 4K directly to the memory card figured out and ready to go in its GH4.

But once you get that digital video recorder you're pretty much ready to go and put the GH4 to shame, right?  Bigger sensor and all that. Right?

Well, no. Sony has chosen to further cripple their camera with their new consumer codec XAVC S which is actually a smaller frame (consumer 4K) versus the Panasonic's more professional and full frame codecs. The max camera to card output for the Sony is about 50 mps which is less than half the information being lovingly placed onto the internal memory card in the Panasonic.

Yes, the Sony will offer less depth of field than the GH4 but on most other technical video standards the equally priced Panasonic walks all over the Sony.  Both cameras require outboard units for stuff like XLR microphone inputs but where the Panasonic unit also offers SDI output the Sony unit, at this junction is microphones only.

Then we get into issues of handling...both still and video. Sony is using the same NP-50 battery that we first met in the Nex-7. It's a decent trade off of size, weight and endurance for a small, mostly still-intended camera but it's a whole different compromise for a camera that's being aggressively pushed as a nearly "pro grade" video production tool. According to Sony specs the battery will give one a blustery 90 minutes of total run time. Now, I don't know if you've been on many shoots lately but that about enough power for set up, test and few dress rehearsals and maybe one or two takes. Better take along six of the batteries for a full shooting day.

The GH4 gives up about 3.5 hours of run time for a big, fat battery. I feel compfy with two batteries and a little charger (as a safety precaution) for a day of shooting.

The interesting thing to me will be the focusing. The A7 was one of the slowest to focus mirror-less system cameras I ever used (but in full disclosure I haven't retested since they did the big firmware update) while the Panasonic GH3 is one of the fastest mirror-free systems I have ever used.

I guess in the end the proof of the pudding is in the tasting. If you need full frame DOF you might be swayed in the direction of the Sony, and for the price you'll probably get better video performance than any of the other DSLR style cameras out there in the price range (or above it). You will get a nice EVF, a good LCD, and lots of software tools that might make the camera a wonderful imaging tool.  Be advised that there's you'll loose fast frame rates on the Sony when you go to 4K....

On the other hand I think the GH4 product is much better thought out and a real "user" for people who like to work with small, efficient crews. And people who want fast fps. And more battery life.

Good points for the Sony (based on a close read of their specs):

1. A system approach to still and video imaging in the same form factor as their high res cameras.

2. A better codec then their previously pervasive ACVHD offerings (still on the camera and still 28 mps...).

6. I presume they will include the really good focus peaking they've had in previous cameras.

7. The ability to use a wide range of lenses from many lens makers

8. *****The big one will be the quality of the sensor (I think it will be fantastic) and all the accompanying benefits: Dynamic Range, Color Accuracy, High ISO/Low Noise Performance.

We've already discussed the drawbacks above. To condense, be sure to get your out board digital video recorder and a pocket full of batteries.

All in all it's good to see Sony come into the market.

FYI, for all of you who think it will take a long time for 4K to flow into the consumer market please be aware that Sony is shoving something like 24 new consumer 4K TVs into the markets this Fall and Samsung, Panasonic and Toshiba are right there with them. When prices fall after the holiday season, and they will, I think you'll see affluent consumers all over the place upgrading at not much higher a price than they paid for a 2K LED screen only a year or so ago. The adaptation will be much more rapid than the original move to flat panel HDs. And the computer market, led by Dell's $600 24 inch 4K monitor is already heating up. It's a brave new world. Thanks a lot, Aldous Huxley.


edit note 4/7/2014: While I may not be an expert in video I believe that Michael Reichmann over at Luminous Landscape would qualify. Here's a very informative discussion thread on one of his forums about the intro of the A7S and a casual comparison to the Panasonic product. Please read it before pronouncing me "dumb as a stump." : http://www.luminous-landscape.com/forum/index.php?topic=88774.0

edit note 4/7/2014 evening in Austin: Here is a very even handed comparison between the Sony and the Panasonic by Andrew Reid at EOSHD. Well worth reading: http://www.eoshd.com/content/12562/panasonic-gh4-vs-sony-a7s-compared-wins-4k-battle-paper
Posted by Kirk, Photographer/Writer at 20:02 23 comments: