The practice of photography can be like fashion. Or it can be a life long linear process. 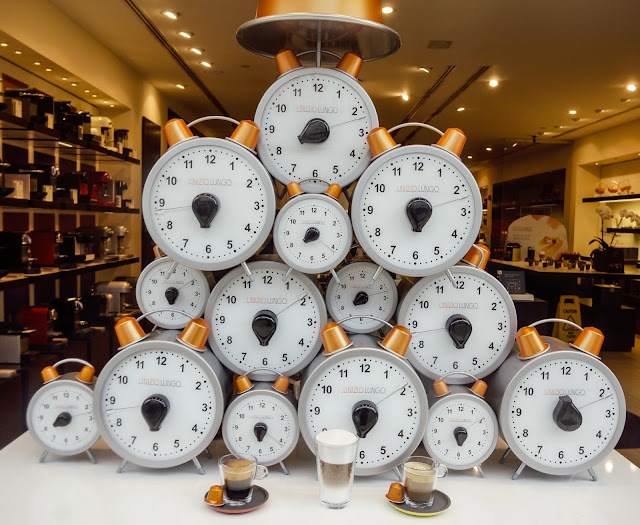 A display in the window of the Nespresso Shop on Newberry.

As I sat trapped in a coach seat on an aged and tattered American Airlines airplane I had time to think about the whole spectrum of art photography. I wanted to have a clearer window into the different ways in which people who aren't using their cameras to make a living in a traditional, commercial application of photography approach their subjects and their understanding of style. How much is generated internally and how much is a reflexive reaction to a world inundated in images?

I spoke with a person in the film industry on Friday. We were talking about HMI lighting (yikes! more lighting from Kirk?) and he made a remark concerning still photographers. I give him credence since his background originally included a successful career in photography. His remark, in regards to the real lack of lighting acumen among most shooters was this: "There's no such thing as a good photographer under 40."

Rather than trying to be snarky what he was really trying to say is that it takes both 10,000 hours of working on a craft to even begin to get a sense of mastery, and that the first twenty years of working in the arts is a process of working through all the different styles and influences you are plagued with until you finally get to the point where your true visual and conceptual nature shine through and you are able to comfortably separate your work from the transient seduction of the photographic fashion of the moment. It's the point at which you decide that you don't need to learn HDR or layering or a specific method of fill lighting just because everyone else is doing it, in the moment.

Said in a nicer and simpler way:  It takes time to find your voice.

Back in the 1960's John Szarkowski curated a show at the Museum of Modern Art in N.Y. called, Windows and Mirrors. Here's what the Museum's press release had to say about the show:

".......In John Szarkowski's view, the dominant motif of American photography during the past 20 years has been a movement "from public to private concerns." Unlike the generation of the 1930s and 40s, Szarkowski suggests, the generation that came to artistic maturity and public recognition after 1960 is
characterized by a pursuit of highly personal visions of the world rather than by any attempt to offer a comprehensive program for social or aesthetic progress.

MIRRORS AND WINDOWS has been organized around Szarkowski's thesis that such personal visions take one of two forms. In metaphorical terms, the photograph is seen either as a mirror--a romantic expression of the photographer's sensibility as it projects itself on the things and sights of this world; or as a window--through which the exterior world is explored in all its presence and reality.

The 1950s marked the historical watershed in photography's turning away from public to private concerns for a whole complex of economic, social and technological factors including the decline of the great picture magazines (Life, Look) and the diminished commercial and, by extension, social opportunities available to the photographic professional. Two major influences
in the realignment of photography's relation to the world were Minor White's magazine Aperture, which first appeared in 1952, and Robert Frank's 1959 book The Americans, a personal vision of the Eisenhower era.

Between White, the prototypical "mirror," and Frank, the prototypical "window," there was defined, in Szarkowski's works, "a model for the fundamentally divergent concepts of photography's function," a model still "useful in the critical
analysis of the continued evolution of American photography during the past two decades."
Among the leading practioners of the "mirror" approach are Paul Caponigro; Jerry N. Uelsmann, whose surreal, technically stunning montages have been widely influential; Robert Heinecken; and painter Robert Rauschenberg,......"

I was amazed that my memory of this show and of Szarkowski's thoughtful demarcation of the two houses of fine art photography was one of the first things that came into my mind as I grappled with my current opinion of where the momentum in photography resides and why I am so disquieted by the present trends in the art of our collective visual passion.

I've recently come to the conclusion that there are two spheres in our world of photography. There are images (the vast majority) that are "found." And then there are a tiny percentage of images that are "created." While most uses of cameras seem to be for documentation, or documentation with embellishment (cellphone images of today's breakfast taco with a bit of post production nostalgia thrown in....) and don't require more of a photographer than to wander about on a kind of scavenger hunt, looking for images that resonate because they are re-imagined icons of popular culture. Our re-capturing becomes just another echo... Even in this world there's a hierarchy. The most mundane on the bottom. The "street scenes" that mostly show a stranger's back. The gratuitous snap shot of your friend slurping coffee or smoking a cigarette. The top end of the hierarchy is arguably the landscape photo since it shows a higher form of active subject discrimination. A more nuanced search. But it's still an adventure in "found" work. Chances are that, because of the ubiquity of "found" photography and that implied saturation of that genre most of us would choose the same angles, the same basic icons, and make the same artifacts of our culture because we've already previously ingested the roadmap to the image, subconsciously.

Amazing to me is the idea that while we are all scavenging with our little cameras the people whose work we are fascinated with are busy "creating" their images. Whether it is Annie Leibovitz directing and demanding that people share in her vision of what their portrait should be (and making it up as surely as a movie) or Gregory Crewdson who imagines complex tableaus and then painstakingly creates them with crews of lighting professionals, actors and stylists. His images can take crews of forty or more to create and each is thoroughly imagined (created) before a single grip truck rolls.

David LaChapelle is another prime example of a photographer who created his own lush color fantasy world completely from his own fertile mind. It's the creation of a differentiated vision that compels us to be much more interested in this kind of work than in the vast majorities of mostly straightforward documentations. Look at the work of Chuck Close or even the lighting of Martin Schoeller.

Between the two spheres there is obviously a mix, or center ground, that gives us a bit from both pursuits. A fashion image by Peter Lindbergh is a combination of a found beauty subsequently written into a shooting concept which removes the found beauty from everyday and, by the application of lighting, posing, propping and rapport turns the object into a blend of conceptual and documented art.

In a more workaday sense, there are two kinds of portrait photographers. One is more or less documentary in nature, applying a set of accepting poses and lighting norms in order to make a documentation or enhanced found photo of the person in front of the camera. The more uniform the application of technical norms the less we are drawn toward the image. It becomes not a concept but cliched artifact of a portrait.

Then there are the portraits that reveal by collaboration and non-uniform technical structure. Marc Hauser rose to his highest stature on the strength of a series of black and white portraits done with very simple lighting but with wonderfully nuanced interpretations of non-artificial beauty in front of his camera. In some of his best work Arnold Newman's portraits are good examples of this successful intersection.

The work I've seen of someone like Zach Arias that rises above "normal" function are in his collection of studio portraits. Portraits that depend on his point of view and his direction of the subjects for their weight and value. His pursuit of exterior portraits always seem much more about working to get the technique correct more than interpreting a vision. Like a relatively new sailor trying to work a sail in a strong wind... But when he clicks in the studio it's transformative.

Like most fashionable pursuits I think we (in the collective sense) have embraced the "found" side of photography to excess over the last ten to twelve years. We've spent the time grappling with the effect of dealing with new technology instead of grappling with the exposure of our own inner visions and conceptual natures. We're constantly testing our cameras instead of testing ourselves. And it shows in a collective body of work that looks more forensic than narrative. More "cold, hard fact" than delicious and mysterious fiction.

The bottom line, I think, for the vast majority of practitioners who do this for the joy of discovering their vision, would be best served by doing just that. Now that we have a firm handle on how digital cameras work it's time to exit the cocoon of technical transition and get back to the real work of personalizing our work and exploring our own inner visions. We're not all sports photographers or war journalists.

Stock photography has given us (as a culture) an endless supply of descriptive, documentary images of everything from the Eiffel Tower to cream cheese to every variation of the female nipple. We don't need to exactly replicate any of that. We didn't embrace this passion to become Zerox machines.  What might be interesting is setting up images that tell the stories in your mind. It takes more time and commitment but the pay off might be much more rewarding. Interpretation is usually more interesting than documentation...

We can shift the fashion of photography away from endless documentation. We can create images that don't exist in the world around us. We can choose our models and our intentional messaging and have fun with it.

And once you find a subject matter (not style!) that works for you then you can dive in and do the hours it might take to translate your vision into a recognizable and diverse personal vision. And when you do the time you may end up with a genuine and unforced style you can call your own.

It's just a thought. Windows? Mirrors? As a portrait photographer I constantly vacillate between documentation and creation. Sometimes I win and sometimes I lose. But I mostly lose when I go on "auto pilot" and make a product. I'm more successful when I follow a plan in my brain instead of the ones in the books....

Posted by Kirk, Photographer/Writer at 11:59 31 comments:

Email ThisBlogThis!Share to TwitterShare to FacebookShare to Pinterest
Labels: One of those boring essays about the nature of photography.
Newer Posts Older Posts Home
Subscribe to: Posts (Atom)