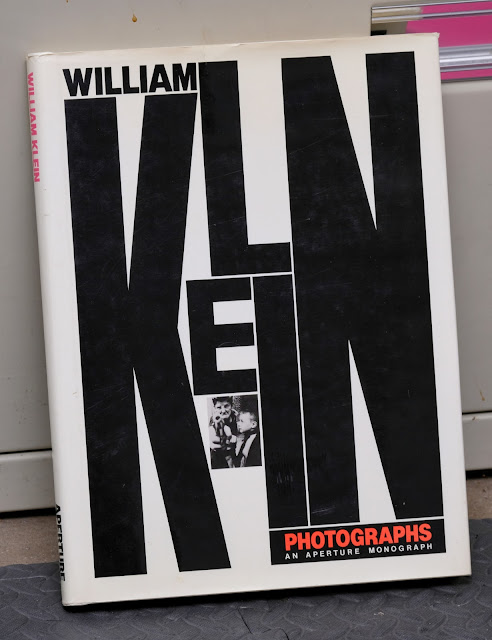 It's easy to assume that photography (art photography) in the 1950's and early 1960's was dominated by people like Henri Cartier-Bresson, Robert Frank and the talented crew who routinely shot for Life Magazine and Look Magazine. Fashion photography was widely thought to be the dominion of Richard Avedon and Irving Penn. And we assume that everyone else working back then was using one or another of a small group of superstar photographers like them as role models and beacons of style; that they represented the photo-cultural avant-garde of an era.

But there is one collection of work that I keep coming back to that seems fresher and more modern than most of the famous work from that period and it was done in a short span of time by William Klein, the essential proto street photographer.

Many years ago Aperture put out the above monograph of Klein's work. It covers his street photography in New York, Paris, Rome, Tokyo and Moscow. It also looks at some of his fashion photography, exhibition design and his graphic design. At a certain point in the late 1950's Klein moved to Paris, took up filmmaking (successfully) and never really came back to the U.S.

While HCB spent most of his career making (wonderful) images that fit into the formalist constraints of his love for the 50mm lens; with an occasional nod to the 35mm or the 90mm, and while Robert Frank also shot with neutral focal lengths, Klein seemed to have always had a wide angle lens (or a very wide angle lens) bolted to the front of his camera. Where Frank and HCB seemed mostly to relish being unobserved while photographing Klein and his wide angle lens are almost always right in front of the subject and usually fully engaged with them. In their faces! As a result his photographs are much more immersive, emotional, powerful, and even confrontational. They have a power to them that seems to have grown while (perhaps because of saturation or stateliness) the images of his street shooting peers now seem more like exercises in formalism and design by comparison.  Even his printing of images was a rejection of the standard of the day; rejecting a broad range of gray tones from black to white and instead relying on higher contrast printing to accentuate his approach.

When I bought this book, well over twenty years ago I leafed through it a couple of times and then it sat on a bookshelf for ten years. When I took it back off the shelf ten years ago it seemed to have aged well. Better than I expected. And when I pulled the book into my reading nook and sat down for a deeper look again last week I started to develop a stronger re-appreciation for the power Klein wielded; being able to wade into a crowd and compel a group of strangers to respond (not pose) to him and his camera. Almost like the subsequent photography of modern street photographer, Bruce Gilden but with none of the implied malice, voyeurism and affected disregard for the subjects.

I have not seen a show of Klein's original prints but I certainly want to. Learn more about him here: https://en.wikipedia.org/wiki/William_Klein_(photographer). Read what William Klein's work taught modern street photographer, Eric Kim, here: http://erickimphotography.com/blog/2013/03/26/10-lessons-william-klein-has-taught-me-about-street-photography/

And a quick Google search turns up a trove of his work here: william klein photography

I think everyone should take a dive into the photographs and life of William Klein. Much of what passes for art/street photography now owes a deep debt to his ferocious and energy filled plunge into the streets of the 1950's and 1960's, armed with a camera. 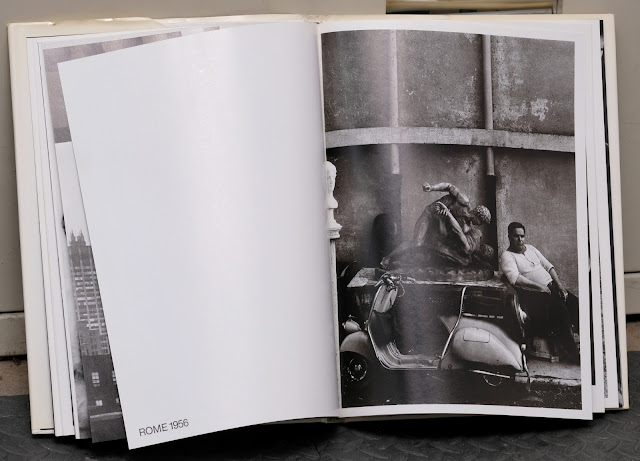 Posted by Kirk, Photographer/Writer at 21:03 9 comments:

OT: Can you help me with an ethical issue? 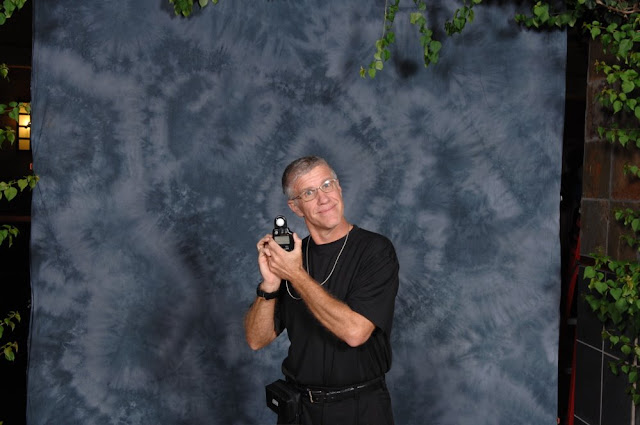 Kirk with light meter, ca. 2007.
My photo (above) has nothing to do with my conundrum described below.

Nothing as easy as whether or not to use a light meter...

Well, over the winter months, during the time during which I don't use the air conditioner, I wasn't paying attention and it seems that an enterprising finch (small bird) has built a nest just to the side of the unit that is least visible. The next is amazingly well done and cozy. The entrance faces straight out and there is a rounded roof that offers the bird some protection from the rain. It's too high up for cats or raccoons to reach and in most regards it's a perfect location for a bird. And in bird nests as in all other real estate ventures the secret is: location, location, location.

I met the bird the other day. I was looking up at the nest and she poked her head out to see what the hell I was doing. She flew away but she's been back.

So here's the issue: Right now the weather is mild and cool. The studio has two big windows on one wall and four big windows on another wall and, in conjunction with a nice fan, I can probably use the office with no air conditioning for a while longer into the Spring. But temperatures in the 90's are just around the corner and by May temperatures in the upper 90's should be routine.

At some juncture I'll have to turn the AC on to stay comfortable while working on my masterpiece, nano-acutance photographs, or I'll need to cool the studio for a visiting client/customer. Providing no air conditioning in Austin should be the perfect way to bring any studio business to a screeching halt.

But what is my responsibility to this bird and,  perhaps, a burgeoning family of finches? I'd hate to drive them away from a nearly perfect nest by subjecting them to the roar of an air conditioner and, if they stay, I'll feel guilt and remorse for potentially deafening their delicate offspring. I guess I could close the studio and go on vacation until such a time when they are through nesting but I would like the convenience of using my space to work in, and I might find it constraining to try and edit all my photos and video on a smallish laptop computer outside the studio.

Had I noticed the construction of the avian condo early on I might have gently deconstructed it and discouraged continued squatting but now I worry that by allowing (even tacitly) the construction to go to completion, and having not previously served them notice, that I have set an ethical precedent which seems to defy an equitable solution. One party or the other (or both, as is usually the case...) will suffer depending on our final solution.

My sweet friends suggest turning the AC unit on for short periods of time to acclimated the birds to the noise but as I mentioned above I fear for the auditory health of the bird and her offspring. My less empathetic friends suggest spraying the nest with a flamethrower....

I want to be a "good guy" in this and would hate to be haunted by the ghost of St. Francis d' Assisi for all eternity....

Perhaps the answer to my poignant dilemma will come from one of you; my sage readers. Can you help?

P.S. The bird seems far too small to eat so my vegan friends need not worry.....

Thanks in advance, KT

P.P.S. What a nice opportunity it would be to use the new Fuji 100-400mm lens for BIF (hate that acronym) except that the wall on which they've built is about six feet from the wall of our kitchen. Now that I think about it the 8-16mm lens might be a better choice.