What a nice weekend. 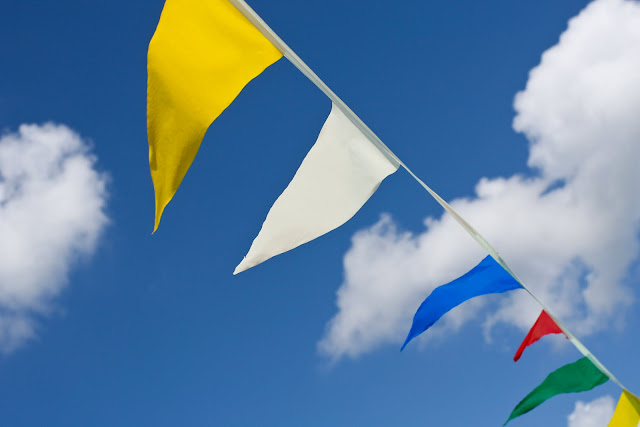 The backstroke flags flutter in the hot breeze and remind me of the Buddhist prayer flags on the foot hills of the Himalayas.  Just plastic playing with the wind.  Funny what goes thru my mind at the side of a pool. 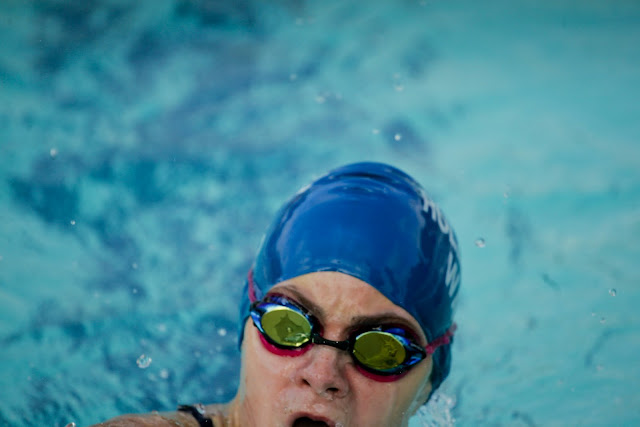 At the turn everything stops for the fraction of a second as all of the mass and inertia change direction; one hundred and eighty degrees and get ready to explode off the wall, heading for the other end of the pool. 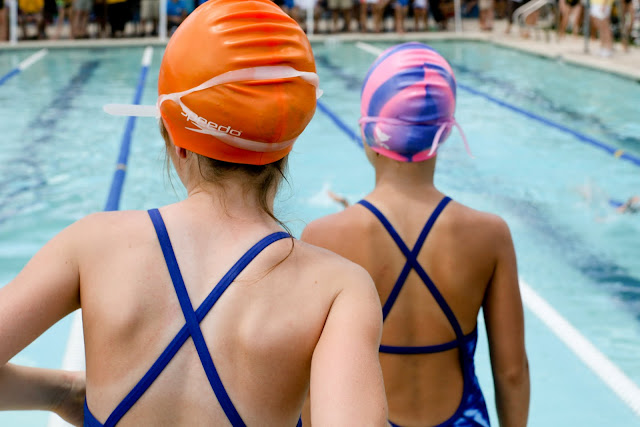 There's an anticipation when you swim in a relay.  You need to be like the middle of the three bears.  When your teammate comes barreling into the wall you need to time everything perfectly.  Stay too long and you lose time.  Leave too soon and you are disqualified.  Get it just right and the advantage is all yours.  Just like real life. 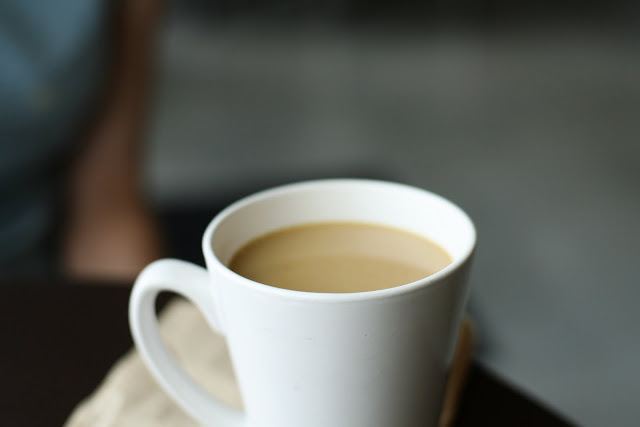 After the swim meet I went downtown to see my friend of 17 years, hundreds of shoots and thousands of smart conversations. (At least from her side of the table).  We drank "single origin" coffee.  We talked about growing older in America.  I looked down and her coffee was perfectly lit by the open shade of Congress Avenue in the late afternoon.  I couldn't help myself.  I photographed another cup of coffee.  I'm seeing a pattern emerge.

Around 2:30pm the first cracks of thunder peeled and it rained like crazy for forty minutes.  A soaking rain, by measures frothy and misty, and then hard and fast.  The gutters were foamy with street oil and dirt.  And everything smelled fresh.

I went to the camera store today to consign a carbon fiber tripod.  A vintage Gitzo.
I'm into my second year infatuation with wood tripods.
My two Berlebachs are my favorites by far.

I thought I'd make a little cash from the sale and open up some space in the studio.
But when I left I had a big Pelican case in hand and a couple more
Elinchrom Monolights to play with.

I swam.  We watched movies.  We ate breakfast tacos.

It was one of those weekends when everything was just right with the world.

Get Close. Get Wet. Get Photographs. 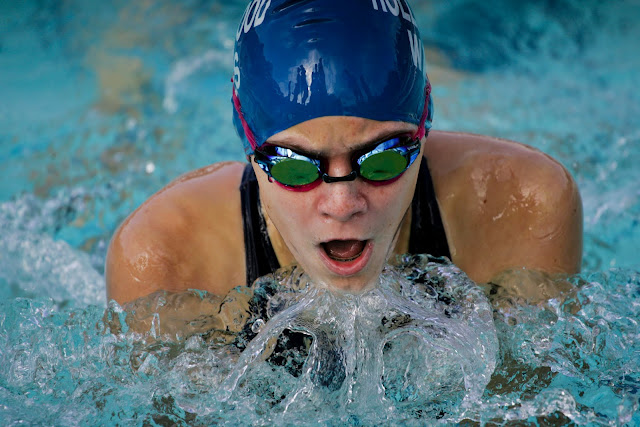 My son's Summer league swim team, the mighty Rollingwood waves, clashed with their rivals, the Barton Creek West Barracudas, yesterday.  The Barracudas were soundly thrashed in what turned out to be one of the longest swim meets of the season.  We arrived at their pool at 7:30am for warm-ups and then, at 8:00 am, we all settled in to the rhythm of the meet.  The meet wrapped around 1pm and with the temperature already well into the 90's (f) we were all ready to head home and hydrate.
I took two cameras with me yesterday and ended up using only one camera body and one lens.  The body was an original Canon 1d mk2 outfitted with a 70-200mm f4L zoom lens (not the IS version).  I broke the rules by using the camera to make only Jpegs.  I figured I'd try it out and see if the out of camera Jpegs from these older cameras were really as bad as I was led to believe.  They're not.  But they are unforgiving.  Get it right and you score a nice photo.  Get it wrong and you're Sumo wrestling angry photons.
In the last few swim meets I've been concentrating on getting nice shots of the kids waiting for their races or hanging around with each other.  Yesterday I tried to concentrate on the actual races.  The light was good and the angles of the pool were also workable.  So my real practice was all about my timing.  And the 1 series cameras are good for that.  They have a very short shutter lag, much shorter mirror blackout times and quicker overall system response than any camera I've used since my mechanical Leica rangefinders.  I stuck with fairly wide apertures and fast shutter speeds.  I love the way this combination freezes the wave just in front of the swimmers. 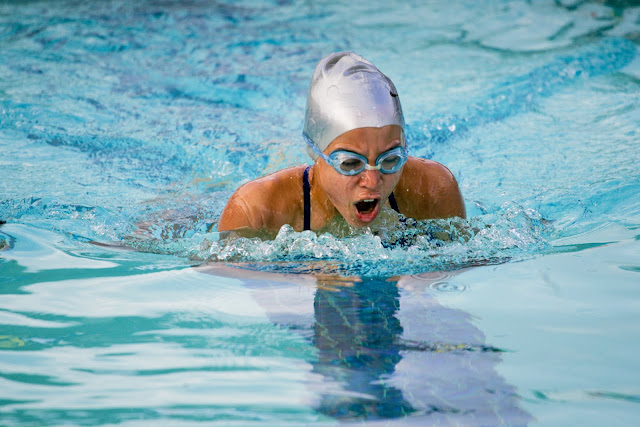 Avid swimmers among my readers will be happy to know that Ben's freestyle improved.  With a focus on front quadrant hand exchange his freestyle was smoother and more efficient which allowed him to breathe less per 50 yards and that meant faster overall time.  When I was in workout this morning I concentrated on staying long thru maximal glide and good front end swimming.  Helped me focus on staying with optimal technique instead of doing "trash" yardage. 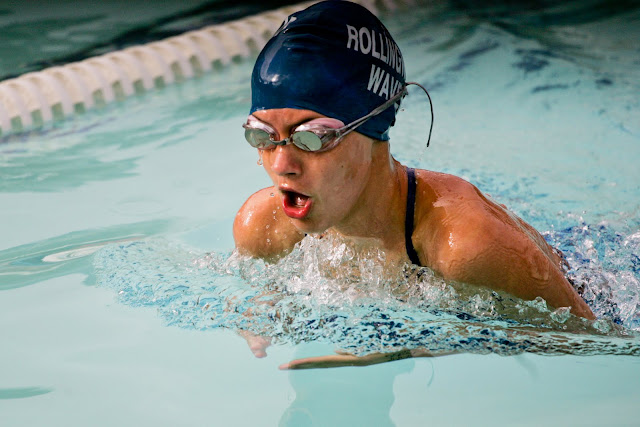 Whether you are swimming or photographing swimming or just photographing, timing is a crucial part of the calculus of getting good images  or having a good performance.  Over time, in any event or performance, you develop an awareness that there are moments of build, peaks of action and plateau's of recovery.  Usually (but not always) the best images are delivered at the peak of action.  This means that your mind and your camera need to be ready to react almost without thinking.  If you think first you'll lose the moment.  Mindless reaction?  Yes.

In the martial arts (or swimming or running or ....) practitioners practice moves over and over again, thousands of times.  The rational is to instill a physical and mental reaction that is quicker than rational thought.  An opponent stikes, your block is instinctive.  You parry and the thrust is instinctive.  Mapping out the moves in your head takes time and is fraught with hesitation.  Instinctive reaction, reinforced by constant practice means that, when the moment arrives you'll be able to capture it without analysis.  Every part of the system moving as one.

Workflow:  I came back to the studio with 1075 shots.  I downloaded them via Lightroom 3.0 into folders on two hard drives.  During the downloading Lightroom makes custom names for the files and also inserts my copyright and shoot information into the metadata.  Once all the images are downloaded I select all the images and run parameters that I want included with each file.  These include adding the lens profile, selection the color calibration I want to use (Adobe Standard for these), selecting medium contrast and adding some clarity slider fanciness.

Then I go thru and color correct and density correct in small batches.  The images are output to new jpegs with a quality setting of 90% and the longest dimension of each file is set to 2000 pixels.  Each file is converted to sRGB and then all are uploaded to Smugmug.com (which I have been using with great success and only scant minutes of downtime, since 2005) and placed in a protected album for the swimmers and their families.

At the end of the season Belinda will go thru all the images, making sure we have a good image of each child, good group shots and fun action shots and we'll put together a 12 minute slide shot.  At the end of our awards picnic, after the sun sets, we'll play the slide show thru an LCD projector onto a 9 foot by 9 foot white screen.  Once we do that we'll have another project done.

We will have gotten wet.  We will have had lots of fun.  And we'll have the photographs to prove it.

Random note for heat relief:  If the heat is getting you down, go here for some visual heat relief:
http://frankg-photoworkshop.blogspot.com/2011/02/winter-in-texas_08.html

Posted by Kirk, Photographer/Writer at 11:26 3 comments: