A mundane post about packing gear for traveling to shoot both photographs and video. 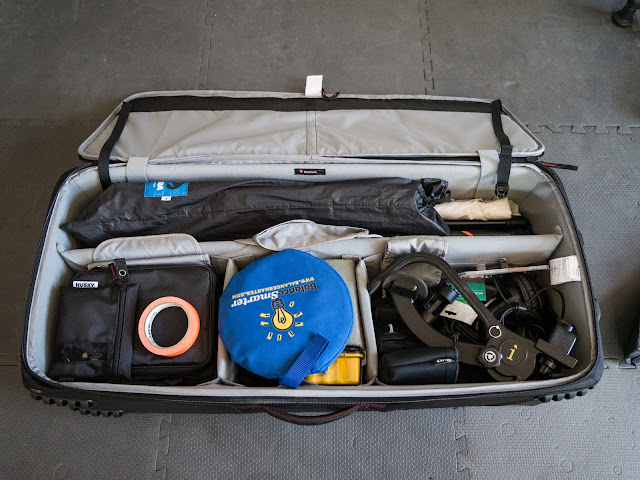 I'll be at the Austin airport first thing Monday morning. I'm heading out of town for two days to shoot a project that requires both video and photographs. It's not an especially complicated project. We'll be shooting two separate interviews and then we'll need video that shows our main subject engaged in activities of daily life. These will include walking with his dog and fishing. We'll need close up shots of the client's product in all phases of these activities. The interviews will take place inside an office and the active shots will take place outside. The photographs need to feature the two subjects from the interviews working together (patient and clinician) as well as a few "product in use" photographs.

We travel and scout tomorrow but scouting tomorrow doesn't help much with packing today. I tend to want everything I need close at hand on assignment and I know we only have four hours with one of our subjects on Tues. If we need additional gear there's no time to run out and get more; we'll just have to figure out a way to proceed with what I've packed.

In my main case (above) I've got: two large, 672 W Aputure Amaran LED panels, in their cases. I also have a smaller Amaran LED panel snugged in next to them. In the center, front area I have a big, sturdy Manfrotto fluid tripod head, and in the same compartment (just under the blue  case with the gray/white target) I have a Pelican case with a set of Sennheiser wireless microphones. On the right side of the case I have two different shotgun microphones, headphones, two preamplifier/phantom power devices as well as my usual Beachtek XLR to 3.5mm adapter box. There is an Ikan shoulder mount for shooting video and two 25 foot XLR cables; along with lots of connectors and adapters.

Somewhere in the front of the case is a Leica tabletop tripod with a ball head.

In the rear section of the case is a big set of Manfrotto video tripod legs. The legs are sharing the space with two Chimera 4x4' collapsible aluminum frames and several kinds of diffusion cloth. In a pocket in the same compartment is my Skidmore College-branded, wood paneled pocket knife; it's basically a Swiss Army knife with convenient things like a screw driver blade and a cork screw.

The case is a Manfrotto as well. Fully loaded, in this configuration it weighs in at about 35 pounds. 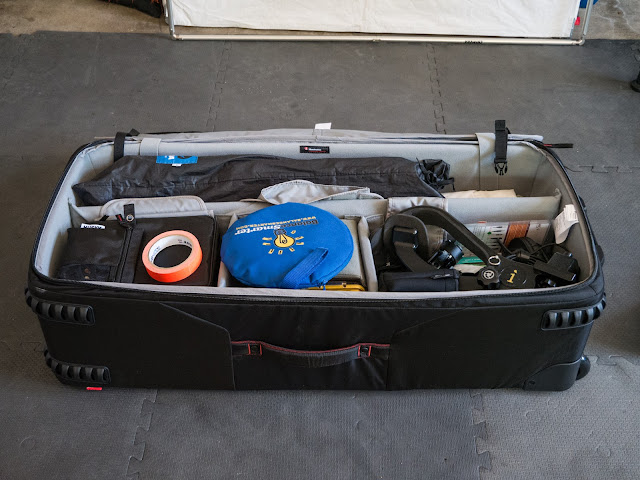 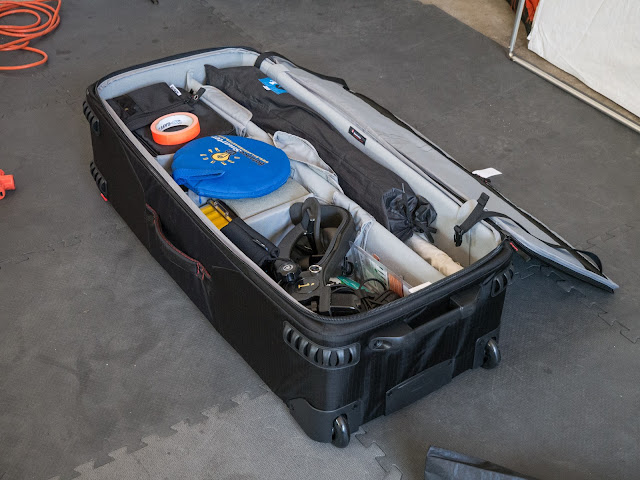 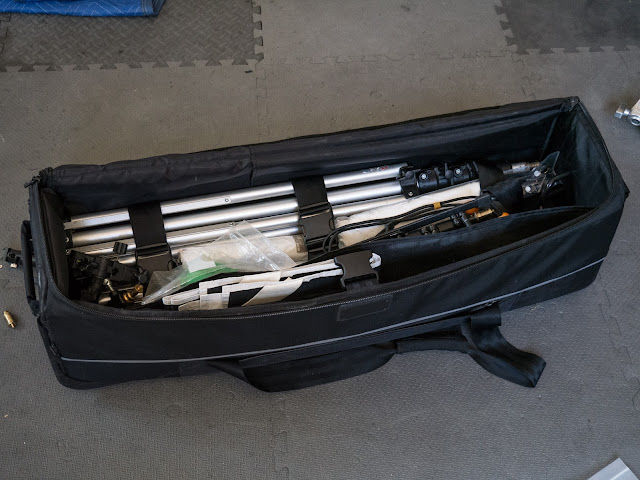 My next case is a Tenba 40 inch, rolling light stand case. I have three medium weight Manfrotto light stands and two nano-stands strapped in as well as a microphone boom pole, some grip heads, and various reflector cloths as well as two Westcott collapsible, shoot thru umbrellas. This case will also get a small shaving kit as well as a pair of pants, a pair of extra socks and a shirt for the second day.

The case has casters on the bottom and bigger wheels at one end. Packed as spec'd it weighs in at about 30 pounds. The two big cases get me up and running for an unmanned microphone on boom pole for interviews and they also get me lighting control for the interior shots, as well as possible overhead diffusion for close up exteriors. Being able to toss in shirt/pants/socks, etc. saves me having to pack any sort of suitcase. I'm flying Southwest Airlines so I get to check both of these without hassles. The final case is the camera container. 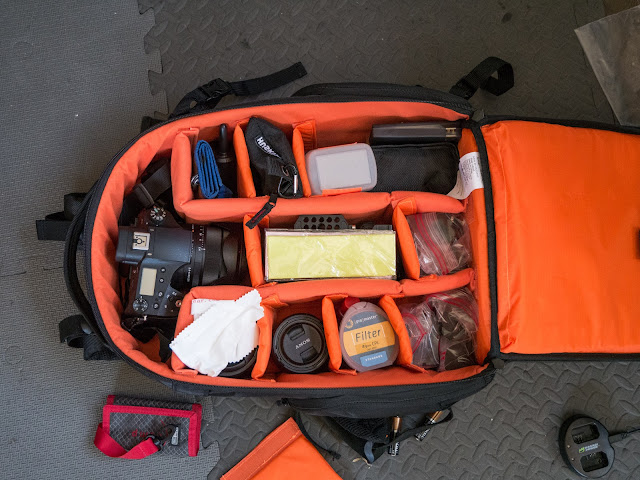 It's the same Amazon Basics Photo Backpack that I used when I went to shoot in Toronto in February.  I've got it packed with a Sony A7rii, an RX10iii and a complement of three prime lenses; the 28mm f2.0, the 50mm f1.8 and the 85mm f1.8. I'll lean on the A7Rii for the interviews and depend on the RX10iii for all the action/moving/dolly/handheld shots. We're shooting 4K.

Also in this case are eight batteries for the cameras, neutral density filters for all the lenses, cleaning cloths, a Godox flash and a remote trigger for the flash. The bottom right compartment and the one just above it are stuffed with big lithium batteries for the LED panels. You are no longer allowed to include lithium batteries in checked luggage. Now the weight gets added to the carry on. Ah well, safety first... I'll add to this collection my phone and its charger along with a vintage/retro 40GB iPod that I recently re-discovered in the clutter on my desk and have been enjoying immensely. It's nice to listen to music and not be interrupted by phone calls or text notifications...

That's pretty much it. I'm overpacked and under packed as usual and, if I knew for sure in which direction I was erring I would lighten my load, but I have a duty to come home with good, useable content and it's not going to make itself.

Why a small backpack instead of my ThinkTank Airport Security case? Hmmm. Well, on two of my recent short jaunts I had a connection delay and even though I had arranged for early check-in I was one of the last people to get on the plane. The overheads were full and my roller case had to be gate checked. I pulled the cameras out and wore them but I still fretted about the lenses. On a different flight we ended up doing one leg on a regular commercial jet and then the second leg on a much smaller regional jet and the overheads were too small for anything bigger than a backpack. Yep. Another gate check. I wanted to stop tempting fate with my gear and it seemed smarter to just pack down a bit and find something that would both fit and be portable enough to jog with all the way from one end of the Hartsfield-Jackson Atlanta Airport (yes, I had to do that to make a connection on the last trip..).

Travel sucks these days. If I can get to my destination in six hours or less in a car I'll do it but for anything else air travel still makes sense. That doesn't mean it's fun, it just means we (generally) save time. But traveling with gear these days always turns into a nail biter. Will it get there? Will it still work? Will our cases be held for baggage fee ransom? Are there ever enough light stands? Why do extension cords weigh so much?

When I write something like this there is always a chorus of voices suggesting that I ship everything via Fedex. Yeah. If we were staying in a big hotel like a Four Seasons or a W I'd consider it but a lot of the time we're heading for a rural area and we're lucky to find a nearby LaQuinta or Holiday Inn Express. Not sure I trust that set up for basic gear security. And....we've had stuff lost in transit before. My take is that if you want to be assured of an item's use on arrival it must travel with you. In the cabin if possible.

So now you know how I spent my weekend. It's a process of charging batteries, putting things in cases and then thinking better of it and taking them back out of the cases. There is no perfect way. But if you think you know of one, please share.

Posted by Kirk, Photographer/Writer at 14:38 5 comments: