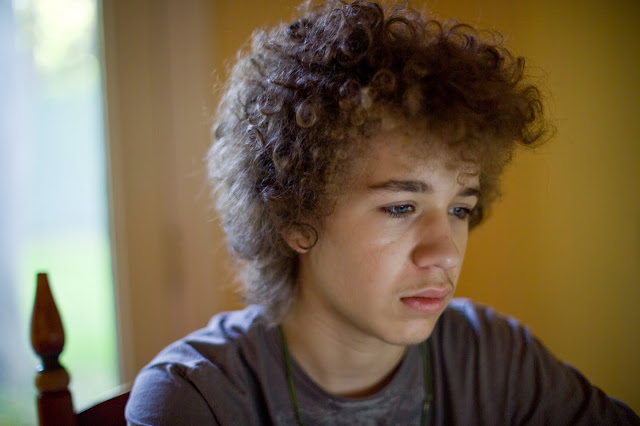 Teenage Benjamin, illuminated by the glow of his MacBook Pro.  Sitting in the dining room at sundown.  Taken with a Kodak SLR/n and an old Nikon 50mm 1.2.  ISO 320.
It's Sunday evening and it's been another week spent in the trenches of art.  As many of your know I usually try to put aside some time on Sundays to go out for a long walk in Austin's ever changing, ever growing downtown.  During this time I take photos for an audience of one:  Me.  And I don't really care if anyone else likes them because that's not the point of the excursion or the point of the photography.  The stroll is like walking meditation punctuated by anti-photos and photos that I would normally resist taking because I couldn't think of a rational market for them. And that, in itself, is even more reason to take them.  The images wouldn't resonate if something subconscious wasn't ticking away and tickling the alternate vision gland.

Everything about my photography seems to be a multi-track, multi dimensional process.  By that I mean that I'm drawn in a lot of different directions and tend to go backward and forward in assessments of gear and technique, subject matter and motivation.  2009 was the year of abandoning the traditional Nikon/Canon path and downsizing into Olympus gear, and more importantly, the micro four thirds gear. I've loved roaming the ranges with palm sized photo machines and snapping away with immediate feedback.  This afternoon I started to reach for a mini camera and I froze.  I knew I was pining for a taste of the old times.  Something big and brutal and manual.  A camera I would have to work at and beat into submission.  I opened some drawers and found just the right thing=the Kodak SLR/n and a Nikon 50mm 1.2.  When I purged the Nikon stuff last year ( I still remember how soulless the D700 was.....) I couldn't bear to send off the Kodak.  At some level I didn't want to let go of Kodak as a company and as a concept so interwoven in the lives of American photographers.  And no one who's ever used the 50mm 1.2 would willingly send it away.

Here's the deal with the Kodak SLR/n and the Nikon 50mm 1.2:  You get the right format, frame and focal length with the combo.  You get a very high res camera.  In fact, I'm planning to test it next to a Canon 5D Mk2 to see which one is really sharper.....Canon fans, get out your handerchiefs.  There may be tears......  But you get a combo that has to be manually focused, exposure set manually and there will be a total reliance on the histogram because the tiny screen is beyond useless for checking quality and exposure. 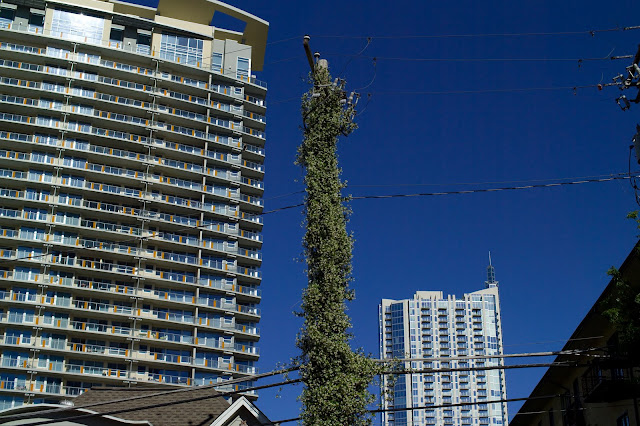 A downtown landscape punctuated by a vine that's captured a telephone pole.  Exposure calculated by conjecture.  Focus by zone and composition by chaos.  SLR/n+50mm

Sounded perfect to me, so I grabbed the combo, a couple batteries and an extra memory card and headed out the door.  I remembered that manually focused cameras can be "set once/shoot often" cameras and started to forget about the center autofocus sensor reality and started filling frame any damn way I wanted to.  I also remembered that, in full sun you can, "meter once/shoot often" so I metered once and stopped worrying about it. So, to recap:  No worries about focus, no worries about exposure.  All that leaves is:  see picture, compose picture, shoot picture.  Wow!  So simple and so straightforward.  Makes photos fun again. 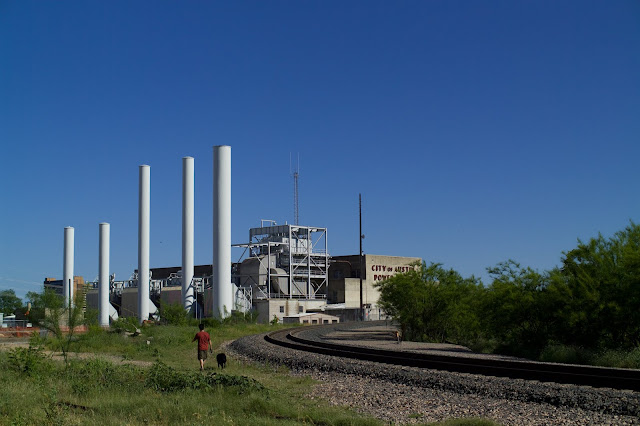 The vampire power plant.  Shut down years ago, it just won't go away.  The camera was already set for the exposure and focus, all I had to do was lift it to my eye and compose.  How easy is that?
The walking was the part that showed some intentionality.
I headed downtown in the high performance (satire intended here) Honda Element.  At first the total manual experience was frustrating and mind occupying but then, at a certain juncture, I stopped caring about whether or not the images turned out as turned my attention to the walking and the seeing. 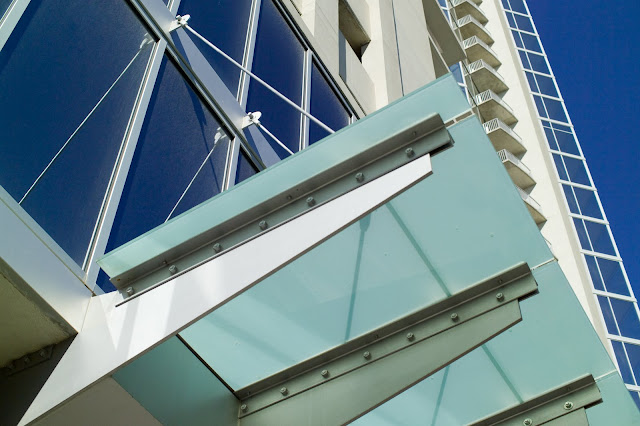 This is the modernist awning above David Garrido's restaurant, downtown.
It was cool not to care.  It's not that I didn't care, I just didn't have a dog in the hunt as it related to the final output.  I was playing scales, practicing stroke drills, working on the technique, screwing off, snapping at random.  The more playful I was the more fun I had.  The less I cared about the outcome the more I cared about the experience. And what I see is that the camera has less and less significance in the photography and my state of mind has more and more significance in the photography.

Let's face it, the lens is forty year old technology and the camera, in digital chronology, is an ancient relic.  And yet, in every instance, they were more than adequate for the tasks at hand.  The colors are no better or worse than my last year's Nikon or my this year's Olympus.  The difference is the quantity of my engagement. 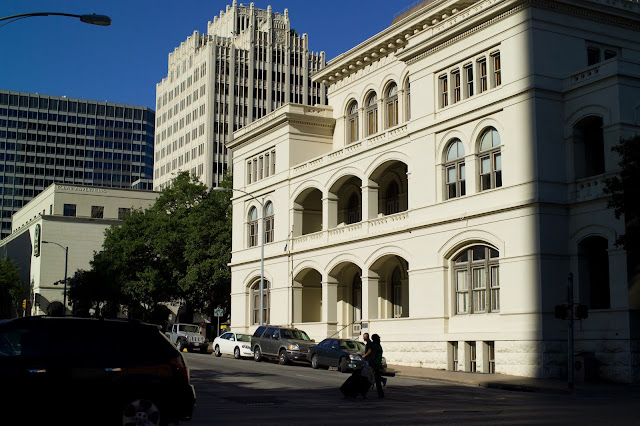 Just love that Norwood Tower in the middle distance.  Can you believe that one exposure setting and one focus point could last you on an entire two hour walk through downtown?  Well I did cheat by changing it once or twice when walking through some open shade.  But those weren't the photos my brain wanted.
If you've just sunk thousands of dollars or Euro's into some topflight gear and now you have the post cognitive dissonance because you shot with it in the front yard and it did not transform your every glance and gesture into a higher level of fine art, may I make a suggestion?  Put the damn miracle machine in manual everything, stop worrying about the ultimate image quality and then hit the streets and walk around until your eyes engage your mind in some sort of fun game.  Then shoot only what interest you and you alone.  No thought for your spouse's approval or how you think the image will play on some website.  And you'l be amazed that half the fun is just being by yourself, setting your own direction and pleasing yourself.  It's the value of less automatic equipment.  The more manual gear actually engages you in a much more immersive way that is much less about showing off and much more about being happy.  Or I could just be totally full of shit and maybe just needed a nice walk.....Whichever, it was a fun tromp through downtown.  Loving the character of the old Kodak.  Maybe I'll get some sort of ectoskeletal amplifier suit and drag out the Kodak DCS 760 after this............

Whatever you do for a living during the week be sure to spend the time appreciating the present rather than being fixated on a future that might not exist.  If the sun is shining and hitting a building or landscape in just the right way, shoot it now----don't come back later and hope is will all be the same.  It's never the same.  Just live now.  It's the most fun.

I had three epiphanies today:  I love coffee.  Anxiety is contagious.  Art is really totally about trying to bring order out of chaos.
Posted by Kirk, Photographer/Writer at 21:07 14 comments: