My first jaunt outside with the low light monster from Fuji. The 56mm f1.2 APD. 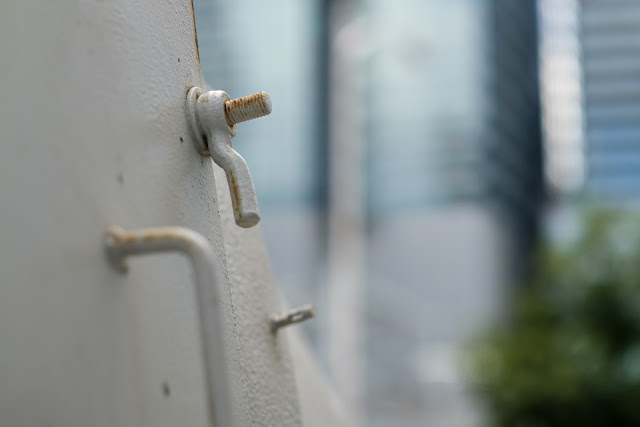 I know that this lens is pretty much custom made for the sole purpose of shooting portraits with extremely narrow depth of field in an APS-C camera system. An attempt to match the look of those fast 85mm f1.8s and f1.4s that people grew up with when they shot film, or now, full frame cameras. But I didn't have a handy human model today, and I've been reading about the enormous health benefits of long walks, so I decided not to have any expectations but to take a Fuji X-H1 and the 56mm f1.2 APD along with me on a two hour walk through central Austin. My one nod to curiosity about the camera's "wide open" performance was the application of a variable neutral density filter to the front of the lens. Sadly, mine did not come with the .8 ND that was originally delivered along with the lens (about 3 stops).

That's okay because I have a drawer full of variable and single neutral density filters to use on video projects.

I shot most of these images at f1.2, compensating for bright sun with a combination of my lowest ISO (200) and my VND. Getting the right stuff in focus can be a challenge but I must say that the manual focusing ring is wonderful, with just the right tactile feedback and not too extensive a throw. If I had trouble narrowing in with AF I could switch to MF and nail every image every time.

I love the idea of this lens and had a blast just getting to know it. 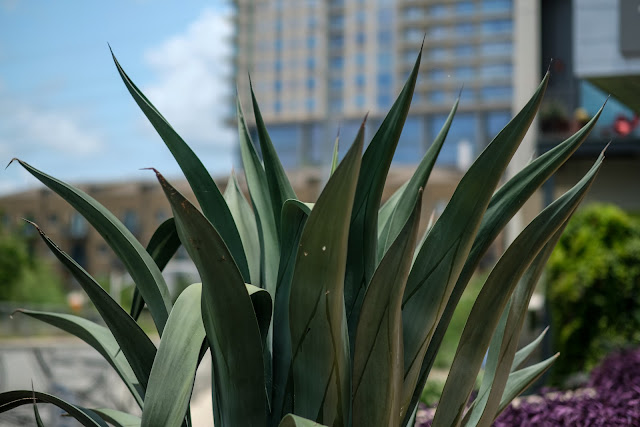 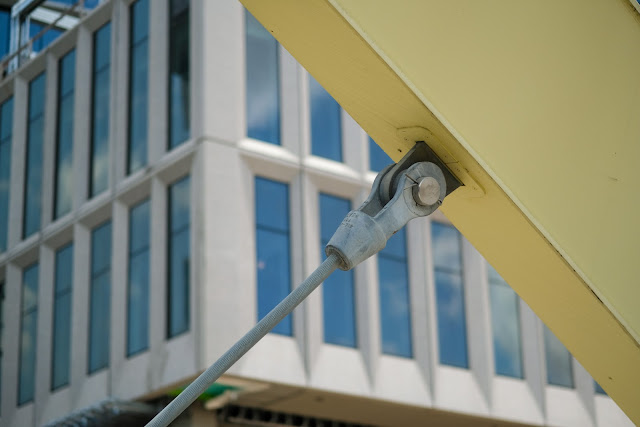 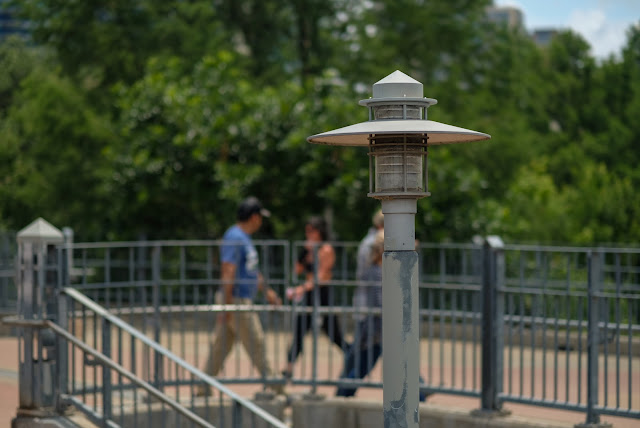 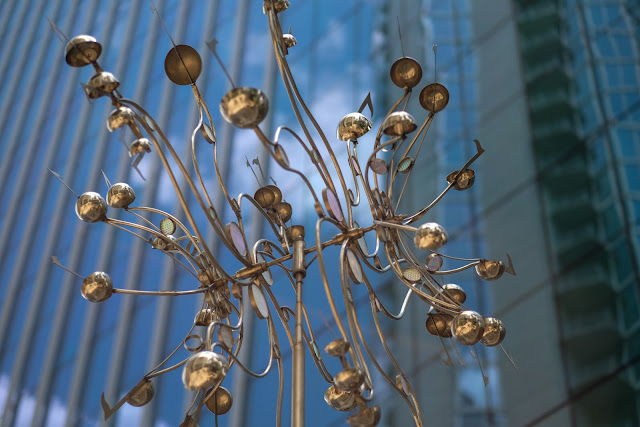 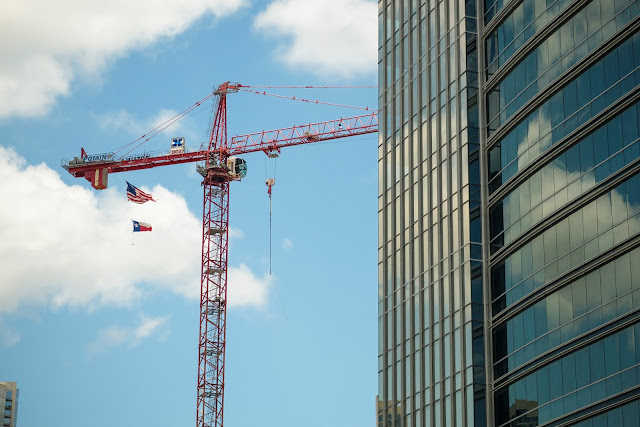 This one amazed me. It's wide open but the building and crane are far enough away to still provide enough depth of field to cover both subject; at least in smaller displays.... 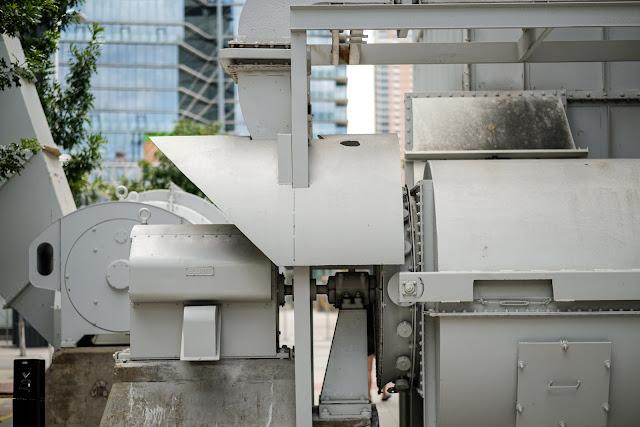 Stunned by the sharpness of this machine when shot at 1.2 with the 56mm. 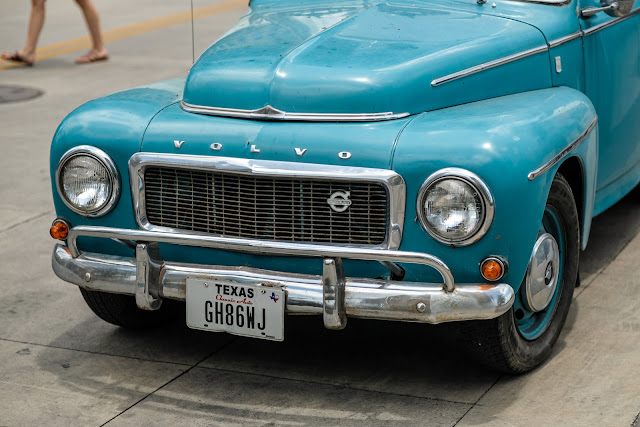 A quick nod to the "Pixie" cameras. I've finally dialed in the right way to shoot with my Canon G15 and I'm making progress with the older G10. 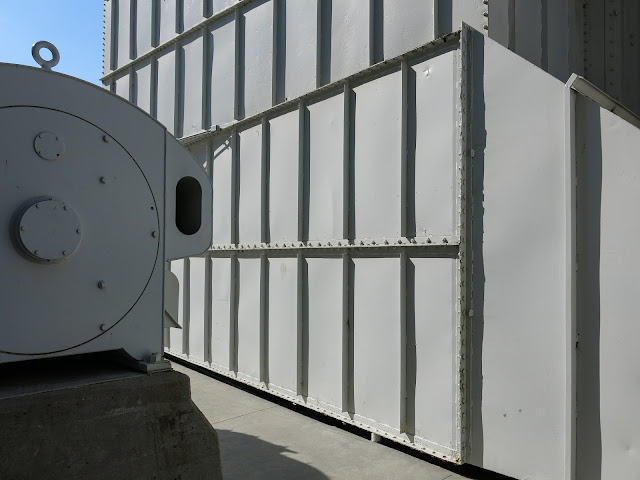 Every camera seems to require its own operating procedures to ensure that you can get the best files from it, and everyone has a different idea of what "best files" look like so it stands to reason that everyone's operating procedures for each camera will come with a lot of variations. I always thought I wanted and needed an optical viewfinder but the small Canon's have such horrible OVFs that I've had to become adept at compositing and (guessing) exposure based on the rear screens. It's not that difficult for most stuff but what a pain in the butt if you are shooting in an area with high ambient light; the reflections off either screen are a major hindrance to seeing the frame correctly.

Here's my routine for shooting with the G15: I set the camera to Large, Superfine Jpeg. I'm not shooting precious, once-in-a-lifetime stuff with these little gems so I don't want to spend an inordinate amount of time planted on my bottom in front of a big screen trying to duplicate the raw file alchemy that the cameras already do well as they create their own Jpegs from the raw material at the time of capture. So, no raw. Get it right in camera or just delete the offending mistakes before someone realizes that you (momentarily???) didn't have a clue as to what you were supposed to be doing.

These cameras have small sensors so they aren't really my first choice for shooting in dungeons, in dim night clubs or out on the streets at night. They work best for shooting in bright light. The higher the EV the happier they are! And both cameras come complete with neutral density filters that can be switched on so you don't run out of shutter speed. I set the cameras for the lowest ISO possible and also switch in the ND filter when I'm shooting outside in the sun; that's because I like to use the f-stop that's just one stop down from wide open. With the G15 you'll mostly catch me working around f3.5 or f4.0. Anything smaller starts to deliver increasing doses of diffraction and anything wider doesn't seem as sharp to me.

The meters in these cameras work pretty well but I'm loathe to depend on them, especially if it's hard in bright sun to check my work via chimping. That being the case I like to figure out the actual exposure based on the "sunny 16 rule," verify that this works by taking test shots and retreating to a shady spot or interior location to take a good look at the represented frames and the histograms and then setting my camera via the manual exposure controls. I find a setting that prevents highlight blow out and use it until the light changes or until I'm pointing the camera at something in totally different light.

If I were to use the small cameras with a heightened sense of seriousness I would bring along a Hoodman loupe so I could "field check" the output while eliminating light contamination. But that sure messes up the ideal use of the cameras as small, light, highly portable and minimally noticeable tools...

Since manually setting exposures works so well I'm also all in on setting the WB manually. If I'm shooting in full sun, as I was in all the samples shown here it's just logical that all the color setting for the images should be exactly the same. I find that people who think older cameras have a "different look" are really responding to the reality that older automatic white balancing was not as sophisticated as it is in current cameras and they are mistaking inaccurate color metering with some color cast or rendering of images from older generation sensors. In the sample below (set at the "sun" pictogram in the WB menu) I find color that's a close match to my present generation of Fuji cameras when the Fuji cameras are set to the same WB preset.

I use the flexizone metering which allows me to move the focusing sensor, but I never do. I keep it centered and move the camera to focus and then recompose. It's primitive and I'm sure your method of moving the AF point around until it's right over what you are interested in focusing on is much quicker more accurate but....my method works for me. Especially with a small sensor camera.

I don't do much post production to the images. As I've written above, if I missed it I blame myself for sloppy technique and toss the shot into the virtual waste basket. Trying to apply mascara to a pig is not a pastime in which I'm interested.

My initial interest in these G series point and shoot cameras from Canon was piqued when I got a G10 back in 2008 and subsequently read an article on Luminous Landscape in which the late Mr. Reichmann  wrote about shooting almost identically composed frames with a much larger format camera and also with the G10, made reasonably big prints and challenged pros and non-pros alike to figure out which prints camera from which camera....   Just the fact that the question was raised at all made me think that something was afoot there. I pressed my copy into service and used it for the majority of images in an illustrated book I wrote for Amherst Media. The images looked perfect as they were generally printed at less than 8.5 by 11 inches at 300 dpi. Most were half or quarter page sizes and I'd be hard pressed to tell which images came from a Canon 5D mk2 or the G10 in that context.

If I press one of the smaller cameras into service for a real job (which I do from time to time) it's probably a quick illustration of: A. Something that can be well light in the studio or is already well lit by the sun. B. Something that does not move so I can place the camera on a tripod, use exactly the right shutter speed and focus very meticulously. And, C. Something that I can shoot at the lowest ISO on the camera (80) for the best image quality.

Done well these cameras can perform really wonderful feats of imaging. Used in a cavalier way they'll dive down to meet your lowest expectations. But really, that's on you. The more difficult a camera is to use the more you have to pay attention to technique. But you'll be rewarded by surprisingly good shots....except when you aren't. 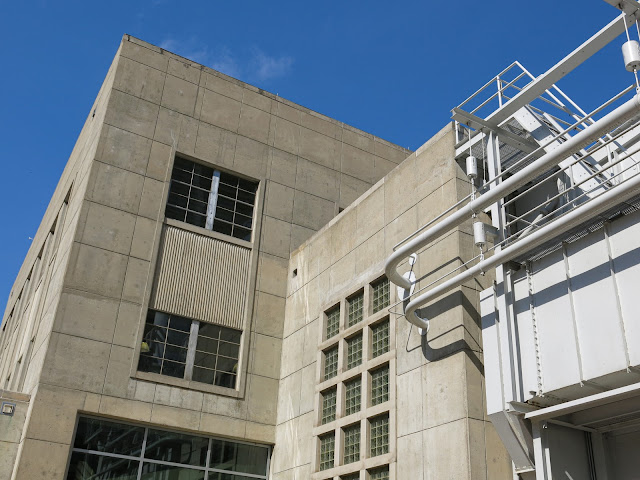 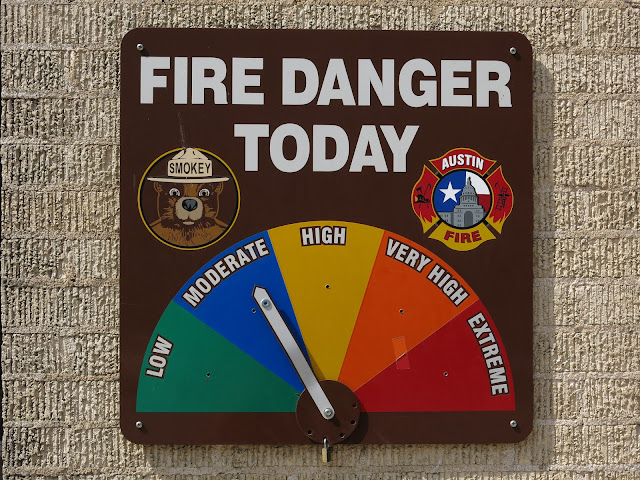 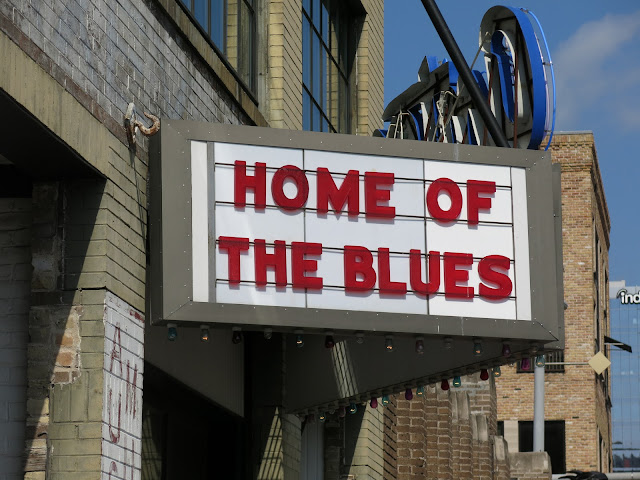 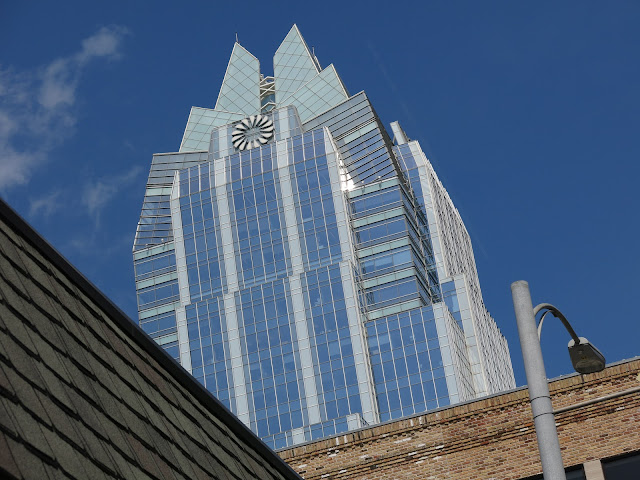 Waiting for the right light. A few minutes of idle time, a big difference in the entire frame. Courtesy my Canon G15. 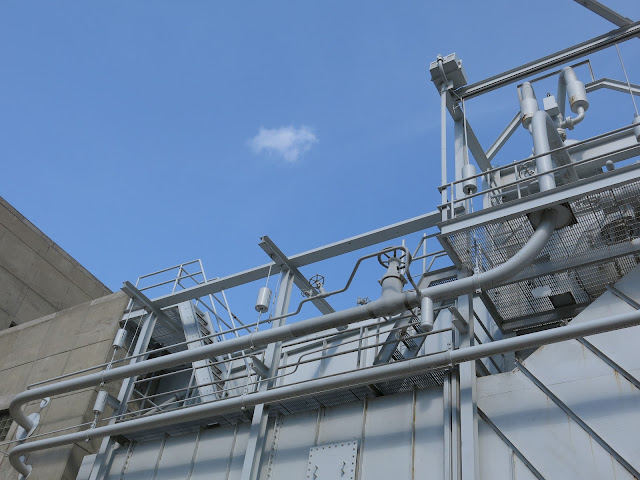 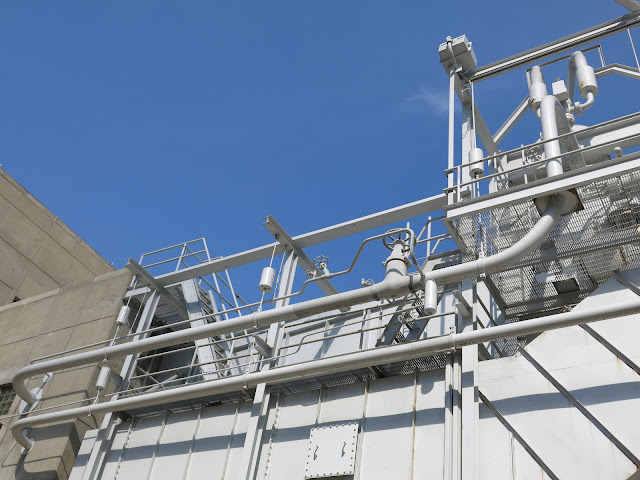 These were shot about 30 seconds apart and they serve to remind me of the value of patience. They look so incredibly different to me that it was amazing. But then, I am easily amazed.

Happy Father's Day to all you Dads! And Grandfathers!

Posted by Kirk, Photographer/Writer at 16:01 2 comments:

The view of Zach Theatre's Topfer Stage from the street. Across Lamar Blvd. 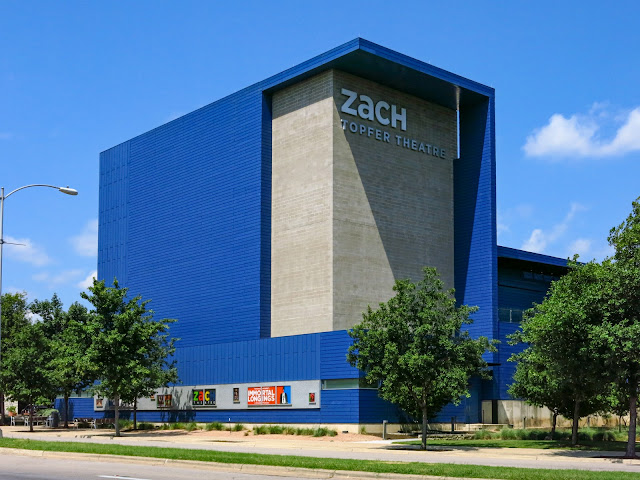 When I first started photographing for Zach Theatre we called it, Zachary Scott Theater (named after a Hollywood actor) and it consisted of two pretty small, brick buildings each of which had smallish theater spaces. One seated about 150 while the other one, in a pinch might seat 180.

Right in the middle of the economic downturn the board of Zach Theatre embarked on a capital campaign aimed at building a first class performance space, complete with a "fly tower" and stage trap doors as well as (my favorite) two spacious bars, one on each level.

The theater design followed one production which was done in a refurbished musical hall. The sound in that rented space was atrocious even though it was supposedly built from the ground up as a performance space. The board learned just how important sound quality in a space is and spared no expense to make the Topfer Stage one of the best sounding auditoriums I have ever worked in or seen a live performance in. It absolutely blows away the main theater at the UT campus, the 2500 seat Bass Concert Hall.

Lately, the area around the theatre complex has become my beginning and end point for my walks around downtown. Mostly because of the parking and the free bathrooms (yes, I have a name badge....).

Just thought you'd want to see an exterior shot of a place in which I spend a lot of time and energy working with cameras, lenses and actors.

Posted by Kirk, Photographer/Writer at 15:57 4 comments: