One of those rainy, sunday afternoon walks around downtown. Camera in hand. 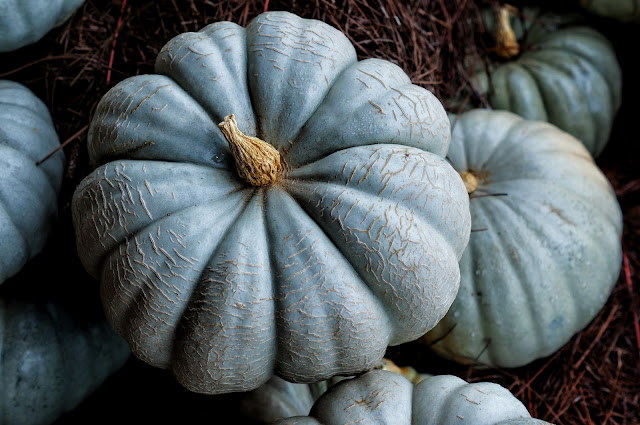 It was a wonderful week for the lawns and lakes and bushes and flowers of central Texas. It rained long and hard on Thurs. and it's been raining a nice, steady, drippy rain all day today. The streams, just weeks ago dry from the drought, were roaring and filled. Shoal Creek was deep and fast as it ran toward Lady Bird Lake.

Even though it was raining steadily I just couldn't bear to stay inside and wile away the time working on this or that. Some irrelevant errata of photography or the mind numbing business of business. I grabbed a sweatshirt because it was our first day in months and months to be under seventy degrees. I grabbed the small, collapsible umbrella I bought the last time I was in Italy, and I grabbed the most eager and anxious to please camera in my collection, covered it with a neoprene case and headed out.

My first stop was to Whole Foods for a sybaritic snack of coffee (decaf, of course) and a vegan, raspberry filled, jelly donut. I had ulterior motives as I'd seen a delivery of pumpkins there earlier in the week. At the time the sun was up and bald and the light held no mystery whatsoever. Today was a different story. The blue-ish pumpkins let the light wrap around them like they were in league with a DP on the set of some kind of Tim Burton movie.

I was shooting today with a Sony a57. I'd given my first a57 to Ben for his use in this year's ongoing cinema class and I missed the camera so I bought another one yesterday and I put a 50mm SAM DT 1.8 Sony lens on the front and I haven't taken it off since. I also bought a Hoodman ruggedized 16 Gb SD memory card. Don't know why but it looked cool on the rack and  it seemed like it wanted to come along with the camera. I don't know if it's any better than the Transcend SD cards I've been using but it seemed like a fairly harmless (though more expensive) indulgence.

I spent 15 minutes with the blue pumpkins and now I have a wonderful collection of them.  So with my pleasurable merienda and my warm up photography complete I set off toward a gray and quiet downtown. The streets were slick and shiny. The crowds were staying indoors, watching football, napping, reading novels or locked in endless multiple player online games. The light was vague and milky.

I walked for about an hour, the rain a constant soft stoccato on my umbrella, the neoprene case dangling from its tether, my right hand wrapped around the camera body. 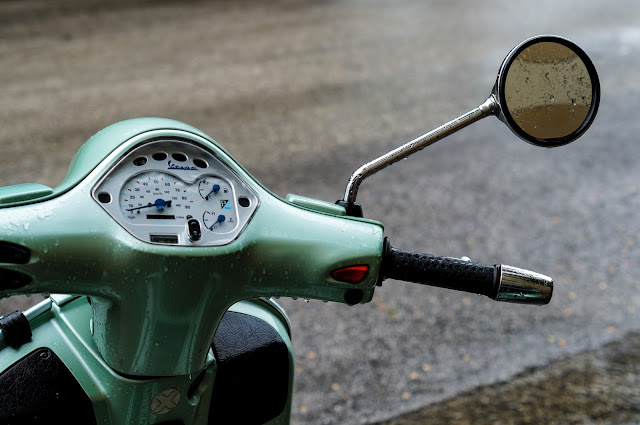 I walked past restaurants with their big umbrellas folded and anchored against the weather. I saw gloomy college students nestled in for the afternoon with their little computers at little tables all around my favorite coffee house, and I saw harried parents dragging their over-bundled small children toward the Children's Museum, intent on providing some sanctioned entertainment. 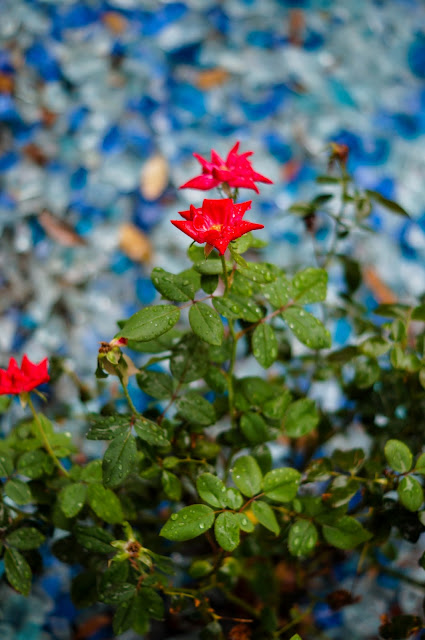 On the way back to my car I walked by an anonymous condominium project and I remembered seeing the white and blue glass in the beds earlier in the Summer, in lieu of mulch, and I changed my course to go by and see how they'd fared.  The little red flowers against the crispy blue background was my reward.

I came home and poured myself a cup of tea, settled into the leather chair in front of my small, laptop computer and proceeded to write this to tell you what I did today in order to relax and keep at bay the routine of my regular business.

Tonight we'll eat crostinis and green soup. Goat cheese and kalamata olives or fresh tomatoes. After dinner we'll all take the dog for a walk and we'll turn in early. Everything starts all over again tomorrow and it begins with the 6:15 am drive to Ben's cross country practice.

I'll have a blog entry up in the morning with some Olympus announcements. I hope your Sunday afternoon was as quiet and peaceful as mine.

Posted by Kirk, Photographer/Writer at 18:19 9 comments: