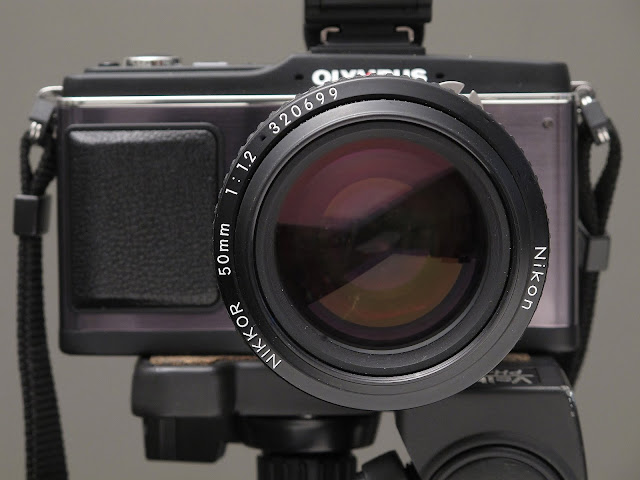 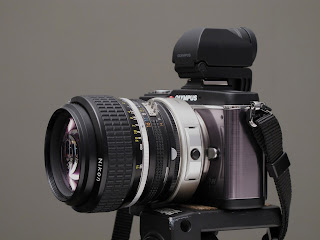 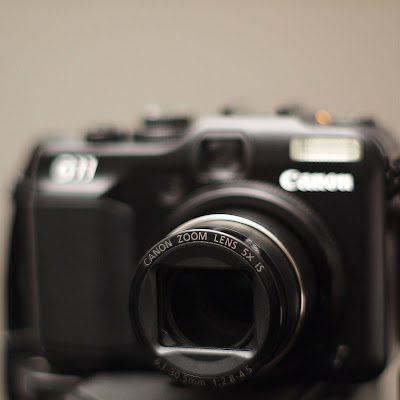 
Just above:  A shot of the front of the Canon G11 made with the Frankenstein set up in the top two images.


Well.  I think it's because I really like shooting square with this little camera and I like the way the finder looks.  But, when I use the kit zoom lens I can't really make the DOF dramatically shallow.  And, with the exception of the 50mm Macro, Olympus e series lens, there are really no fast lenses for the system.  I bought the Nikon adapter to use the 50 1.2 on the e series cameras.  I like the effect on the e30 and the e3.  But when I bought the adapter to use e lenses on the EP2 this seemed like a fun experiment.

I haven't had time to shoot any portraits with the set up because of the holiday crush but that's next.

1.  The shallow depth of field!
2.  The amazing center sharpness of this older lens.
3.  The wonderful out of focus feel.

What I've come to dislike about the combo:

1.  I can't really focus it accurately unless I used the quick magnification in the finder.  That gives me an image that is 10x to focus with but it really slows down the process.  Take this caveat with a grain of salt.  I don't have perfect vision and I usually wear glasses for close focusing.

2.  The lens has some nasty green fringing wide open that show in the high contrast intersections.

3.  I lose autofocus.  Obviously.  The lens never had it to begin with.

4.  If I stop down I am looking at more and more gain artifacts in the finder.

5.  If I stop down I lose the visual effect I'm trying to get with this lens in the first place.

What I hope to end up with is a camera/lens combination that gives me back the tight crops and the shallow depth of field I like while being more convenient than other set ups I've tried since the film days.  In truth I'll probably give it a valiant effort and then start using the 50 Macro Olympus lens.  It's almost as fast at f2 and, if I compare them side by side, at f2, the Olympus is a bit sharper and much better corrected for chromatic aberrations.  It will also allow me to set all apertures while focusing and metering at the wide open value.

I'm on week two with the EP2.  Here are my thoughts.  I like it very much.  It requires a bit more control freak intervention on the +/- controls to keep the exposure in the sweet zone.  No problem there.  The IS is astoundingly good with the little kit zoom.  That lens is sharp in the center zone at nearly every aperture I want to use.

Should you rush out and buy one if you already have a G11?  Good question.  I used the G11 to take the photos of the EP2 above and I was impressed once again at what a good job Canon did on that camera.  Unless you have Euros or dollars cascading from your stuffed pockets I would wait a while and push the G11 to its limits.

In fact, I just saw a 16x20 black and white print in my friend's office, made on a G10 and printed with an Epson 3880 this week.  It was absolutely perfect.

If you did pixel peeking you might be able to find a fault but at the normal (and even at the "I'm an opinionated photoshop expert smart-ass" level) it was damn good.   I mean good enough to compete with similar images from the latest DSLR's.  But, this guy has his chops down and the image was well seen.

What to make of all this?  Sometimes a cigar is just a cigar.  And sometimes we buy cameras because we just like buying the cameras.  And there it is.
Posted by Kirk Tuck, Photographer/Writer at 18:52 15 comments: