The GH5. What does it really look like at ISO 3200. One quick example shot in murky conditions. 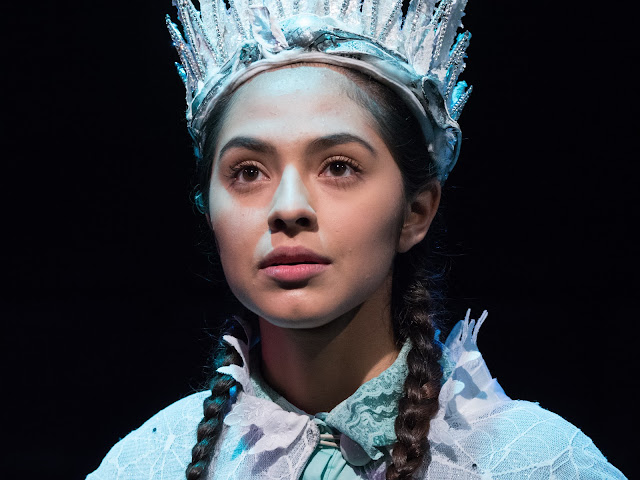 Leslie as the evil queen in a Zach Theatre production of
"The Lion, the Witch and the Wardrobe" for kids.

My friend, James, and I have views about camera noise performance that seem to sit on opposite sides of some spectrum of visual aesthetics. You have to beat me over the head with noise in a photograph before I protest. If I can't see noise in a file at the resolution at which I'll be using the file it just doesn't exist for me. In early days of digital the noise always consisted of color splotches and random color crap but now everyone's camera seems to deliver a nicer (to me) monochrome, film grain-like noise that effectively mimics film grain from black and white films overlaying a color file. James, on the other hand, seems to have a severe allergy nearly as strong as a deadly peanut allergy to the presence of moving noise in the shadow areas of video files; and by extension, still image files. He's usually on the search for a video camera (or still camera) that's more or less devoid of noise.

I'm pretty happy with the general control of noise I get out of one inch sensor cameras and most micro four thirds cameras; as long as the detail and color are there.

We've lately been having coffee and sharing resources about the GH5 camera since we are both interested in it. My interest bleeds over from video and into the photo realm. He would use the camera strictly for video production. I think the high ISO noise presented by my Sony RX10iii or Panasonic FZ2500 is quite acceptable for most productions. James considers cameras like the Sony FS-7 or A7Rii to be the more appropriate tools with which to create un-noisy video files.

I wanted to see if I was in the self-delusion mode (happens from time to time) about the amount of noise in GH5 files at various settings so I did what I usually write about here at VSL. I took the camera out on an assignment and tested it in the kind of situation I find myself in from time to time.

I was at the Zach Theatre campus to shoot a children's play in their small, theater-in-the-round stage. It's a theater that seats about 140 people. The walls are painted black as is the high, high ceiling. Since all the productions in this auditorium are presented in the round there is no effective front fill for the lighting. It all comes from catwalks high above the stage. This means that every face has bright highlights and unfilled shadows. There is very little fill from any direction. This small auditorium will also be the last one updated to use new LED lights. The lights currently hanging from the rafters are ancient tungsten spots and floods. This means that when they are filtered heavily you can only get so much power down onto my subjects.

While the lighting looks dramatic and fun for audiences it's not often optimal for camera work. In the film years we routinely dragged in huge amounts of flash and set up the scenes we wanted to capture and lit for them. We tried to match the "feel" of the theatrical lighting but with all the proper ratios, and an ample amount, to make slow film emulsions happy. We don't do that now. There's no time or budget to get too fancy now.

With all this in mind I dragged a Panasonic GH5 and an Olympus 12-100mm f4.0 to shoot a dress rehearsal of the play ( without an audience; thankfully). When we got rolling I realized that my base exposure/working exposure was going to settle in at 1/125th of a second (needed to have even a chance of freezing motion) at f4.0 (my widest available f-stop) at ISO 3200. Several of the parameters are fixed. I couldn't drop below 1/125th without having too many images blurred by subject movement. I couldn't shooter at a faster aperture than f4.0 because the lens I brought doesn't have a wider aperture setting. I couldn't change the lighting. That left ISO. I started out at 1600, which I consider to be safe for the GH5 sensor. I migrated to 3200 to keep the shutter speed up.

I shot for an hour and tried a number of strategies but in the end it all boils down to the fact that sensors of various sizes and generations have various noise limits. The noise generated is also dependent on the subject matter and lighting. Even, well filled light situations seem to yield less noise while low key, unfilled lighting situations tend to pump up noise. Nailing exposure is a big help. If you have to push up the exposure in post you invariably push up the parts of the image that are most subject to noise generation. Over use of the shadow slider in Lightroom or PhotoShop will affect the noise in shadow pretty profoundly.

Here are my personal takeaways from my shoot/test yesterday: I am okay with most of the noise I saw in the files; given how the files will be used. I would not want to go above 3200 ISO in low key situations with the m4:3 sensors, even the latest 20 megapixel versions, if I could prevent it. The noise reduction controls in both programs can be very effective but take experience and trial and error to get right. The camera's implementation of noise reduction is better for generating large numbers of nicely less noisy files than trying to batch a "one size fits all" setting in post. There is a caveat to letting the Jpeg engine do your de-noising; the default NR setting in the standard profile at ISO 3200 is too aggressive and blurs too much fine detail. I back off one or two notches in the parameter settings now.

Even in situations with ample light you can run into noise issues if you are basically underexposed. Camera meters tend to compulsively protect highlights and they do so by pulling overall exposures down by anywhere from 2/3rds stop to a full stop. Sometimes even more. Recovery costs noise.

Finally, if you read the information about the GH5's "improvements" over previous models you'll find that the new types of noise reduction use formulas to decide whether an area in a frame is detailed or flat and the camera applies different kinds and amounts in each area. There isn't such a thing, in camera, as uniform noise reduction. Which means that sometimes the camera gets it just right and sometimes it leaves you with the question: "Dear God Camera! What were you thinking???"

My noise abatement solution for the next dark show in the all black theater? Bring fast primes! I probably could have done a good job covering the show with two lenses: the Panasonic 15mm f1.7 and the Panasonic 42.5 mm f1.2. Maybe I'd toss a 25mm f1.7 in as well. I think all of them could be used wide open which would get me either two stops more of shutter speed or the ability to shoot at ISO 800.

It's all part of my continuing experiment with photography... 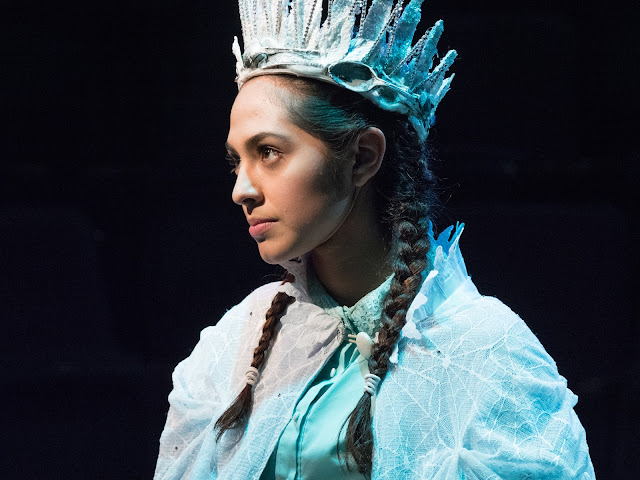 Posted by Kirk, Photographer/Writer at 14:26 13 comments: