Rehearsal Photograph from "An Night with Janis Joplin" at Zach Theatre. 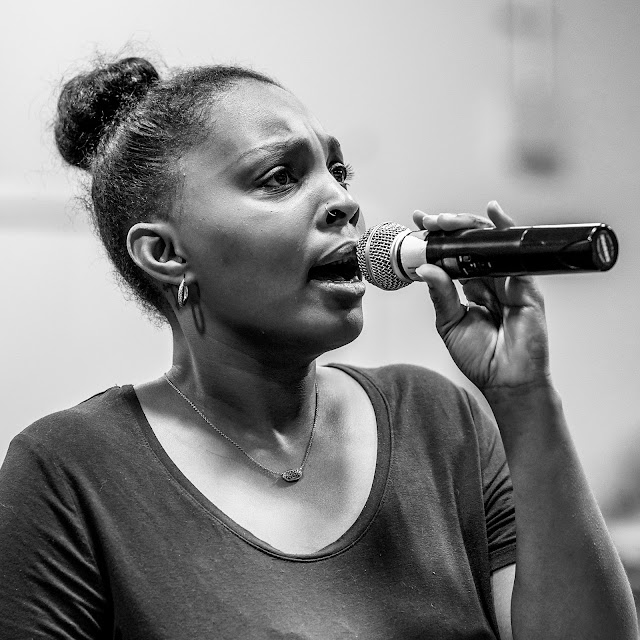 
Posted by Kirk, Photographer/Writer at 22:38 No comments:

"A Night With Janis Joplin" is coming to Zach Theatre and they asked me to sit in on an early rehearsal and take some photographs... 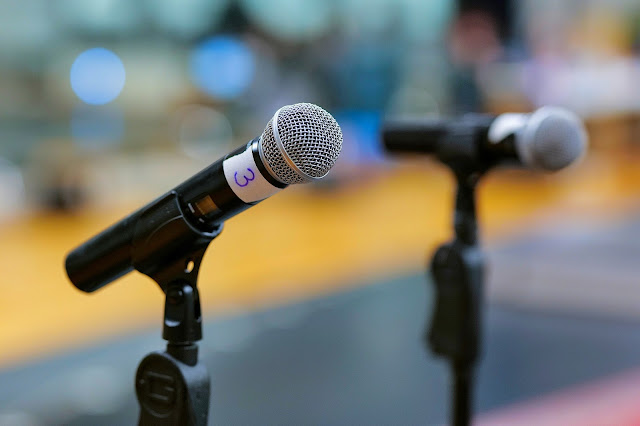 Last week was a full one for me as a working photographer. I spent a couple of days shooting corporate portraits on location for a large, national accounting firm, I photographed a couple of radiologists here in my studio for a big radiology practice, and then shifted gears for the next two days and photographed a fast moving event/symposium, produced for spinal surgeons from all over the country, at the Fairmont Hotel here in Austin, Tx. By the end of the week; the end of the day Friday, I'd already put an additional 5,000 frames on my Lumix S1 cameras. But we had one more project to shoot on Saturday. It was a rehearsal of "A Night With Janis Joplin" over at Zach Theatre's rehearsal facility. And it was the most fun job of the week. Few other jobs are so self-directed and also accompanied by lots of Janis Joplin's music. Plus, actors are a blast to work with.

Mary Bridget Davies plays the lead and has Joplin's voice and mannerisms nailed down with incredible accuracy. Living close to Austin I had the opportunity to see Janis Joplin live, at Threadgill's on Lamar Blvd., back when most of us got just about everywhere in this (used to be) small college town on bicycles and traffic was just a laughable idea. I've seen several different Janis productions in recent years but Ms. Davies just gets everything so right...

At any rate, I was just off a week of non-stop commercial work and feeling pretty exhausted when I packed up to head to the theater. I'd been shooting mostly with zoom lenses all week and wanted a complete change from the f4.0-f5.6 mentality. Knowing I could work in close to the performers I selected three lenses for the Janis project: two Sigma Art lenses (the 35mm and the 85mm) along with the Panasonic Lumix S Pro 50mm f1.4. The space we would work in has boring walls and hideous lighting so I wanted to work nearly wide open with each of the three lenses in order to drop the back walls out of focus and to eliminate as much clutter as I could. I was also ready for a bit of limited depth of field. And I'm always interesting in putting the cameras and lenses to tests at the limits of their operational envelopes.

I chose the S1 model over the S1R cameras because I knew we'd never need these files to go really big. Most of their use will be in advanced press, and on social media, and even the 24 megapixel files will be greatly downsized before use. But my real reason for choosing the lower resolution cameras is my new found appreciation for their wonderful image quality at ISO's I used to consider emergency use only.

Under the most dreadful lighting around I was able to generate nearly noiseless image files while shooting mostly between ISO 3200 and 6400.  And to give you an idea of how low the lighting is from ceiling mounted florescent light banks hanging 40 feet up I was sometimes using exposures like: f2.2 at 1/250th of a second with ISO 3200. The misery of the rehearsal space is that there's a wall of mirrors along one of the long walls and the stage markings (to match the actual stage next door) are faced to the mirrored wall so people can work on the choreography together. What this means for me as photographer is the banks of fluorescents that provide all the lighting in the cavernous space are behind the actors most of the time.

I almost cried in joy when the actors' blocking occasionally placed them in the middle of the room and I could get front light on their faces....

The first thing I do after getting and giving hugs to cast and crew is to pull out the camera and set a good, solid custom white balance in the middle of the space. While this is a good thing to do you have to be aware that when an actor moves into a space where light bounces off a different part of the floor or a different part of a wall you'll probably get different color cast that you'll want to tweak in post production... But having a legit starting point makes life easier. Of course, I could just shoot it all in black and white and forget all the color stuff but not everyone wants to flash back to the 1950's with me, as far as photographs are concerned.

Nothing I'm showing here was set up for me or posed. I'm supposed to be like the proverbial fly on the wall trying to capture good shots of the actors  that the marketing team can use to generate pre-show buzz before the costumes are ready and the sets are done. I did as much as I could in terms of moving trash cans out of my view lines and moving people's backpacks and stuff out of the line of sight as well.

The downside of shooting something in a really dark space, using lenses at or near their widest apertures, and trying to nail focus on the eyes of moving, dancing and singing people is that even the best eye AF has trouble nailing focus every time. I spent much of the day with the camera set to continuous AF at a high frame rate with face detect AF engaged. I won't call what I did "spray and pray" but at some point you have to trust that the camera will drill in and nail the focus you want and that the event of nailing focus corresponds to one of the decisive moments you might be looking for...

Yes, the S1 and S1R do the wobbly in and out of focus thing in the EVF when you shoot with the camera set as above but the hit rate can be very good if you let the camera settle in before mashing the shutter button. I used the faster frame rate with the continuous AF to give myself a better statistical chance of getting technically good stuff. It's a decent technique if you are trying to cover your ass but the downside is that I generated something like 2800 images by the end of the five hour session. 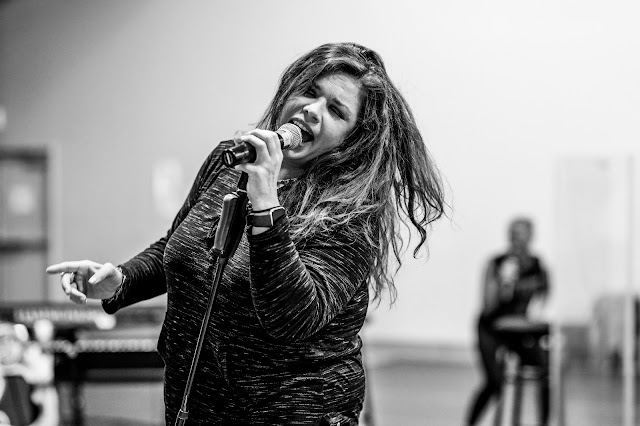 I ended up using the 85mm f1.4 for almost everything and tried keeping it right at f2.2 or 2.5 so I could get the thin depth of field but using the hysterical edge of the cutting edge by attempting f1.4 all the time. Being down one stop gave me at least a fighting chance of getting and keeping and eye in focus most of the time. The other two lenses are great and I'm sure they are as sharp as the 85mm for what I use them for but the 85mm had the focal length I wanted so I would be able to get a tight crop without stepping across the line into someone else's personal space. Had there been more "two shots" and small group shots I probably would have defaulted to the 50mm or the 35mm.

I had always hated shooting in this room because of the flicker and exposure inconsistencies I would get from the ever present florescent lighting units. On this foray I experimented a lot with the flicker control feature offered by the camera. In the past I was too impatient and it didn't seem to work but the reality is that you have to (this is conjecture, but working conjecture on my part) half-press the shutter button and let the camera figure out the flicker rate before you proceed. Once the camera figures it out your can shoot for as long as you want in a single series --- as long as you maintain at least a half-press. Once you let go of the shutter button you'll need to half-press and hold while the camera finds its pace again vis-a-vis the lighting.

You can actually see, in the finder or on the rear panel, a dark diffuse line slowly roll up the screen. That's the darkened line or area that you would capture if the camera wasn't helping you by getting the exact timing of shooting the frame calculated. Once you let the lines go through a time or two if you keep the shutter half pressed you'll most likely notice no repeating dark area scrolling across the screen. This is a godsend for event photographers since we are mostly now working under either flickering florescent lights or flickering, commercial LED lights.

Shooting at a fast frame rate and not spending much time (at all) in review, I was able to get about 1250 shots out of my first, freshly charged battery. I was using the grip so the camera automatically switched to the second battery. I'm sure I could get double that rate out of a DSLR but it's certain not a "deal killer" for an very advanced mirror-free camera that incorporates such a high resolution EVF. The EVF and the image stabilization put a heavy load on the batteries...

Yesterday I was shooting to a C-Fast 128 GB card that writes at 1400 megabytes per second. I was also shooting in Jpeg fine. You'll just have to believe me that it seemed as though the camera had an infinite buffer. I could shoot sustained bursts and never have to wait for the camera to be responsive. I like the C-Fast cards, they are pricy but fast and seemingly indestructible. They are the same form factor as the XQD cards but are more advanced, internally. Now I'm back to having a mix of cards by generation. This includes: UHS-1 SD cards, V60 and V90 UHS-2 cards, several sizes of XQD cards and two of the C-Fast 128 GB cards. Some work well with conventional card readers but the C-Fast cards download more quickly and reliably just using the cameras USB-C connector.

The cast did a partial run through of the play at the end of the day and wrapped a little bit before 7pm. I was happy to join them because I felt less like a "supplier" and more like part of a very sweet and hardworking team of artists. It's a whole different mindset.

After doing a quick edit I was able to peel down from 2850 to about 1,000 files which I then color corrected by groups and also tweaked contrast and clarity. Mostly, my post is about neutralizing color and opening up shadows in Lightroom. Easy stuff. But I did want to share that I was very, very happy with the lack of noise and the very detailed and beautiful files I came away with even when facing bad lighting....and not much of it. Good to have some fast, sharp primes in your back pocket...just in case. 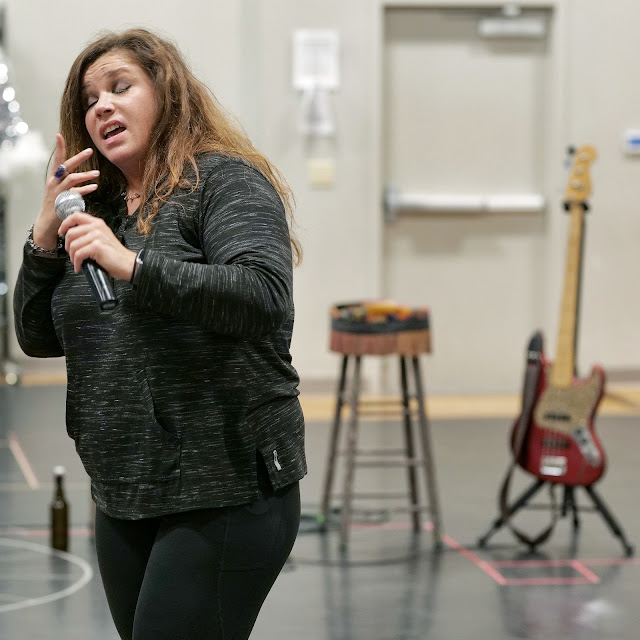 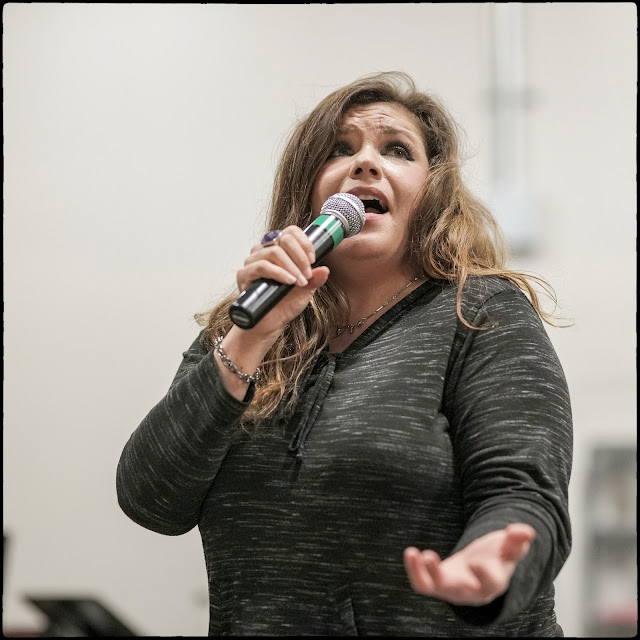 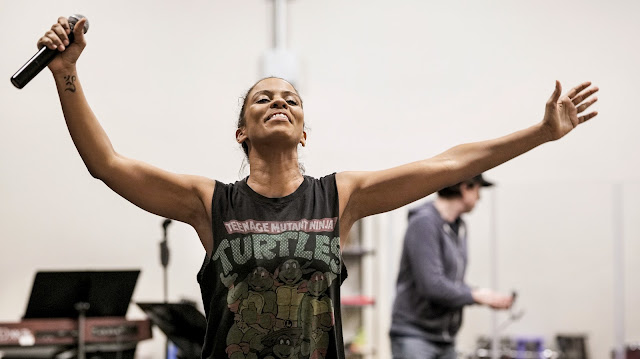 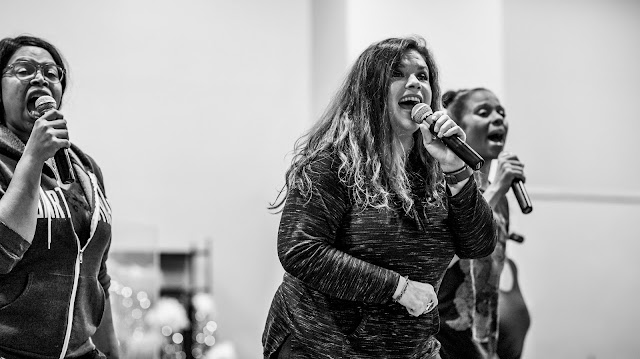 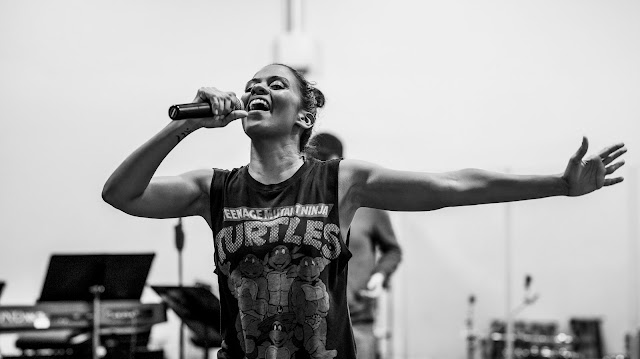 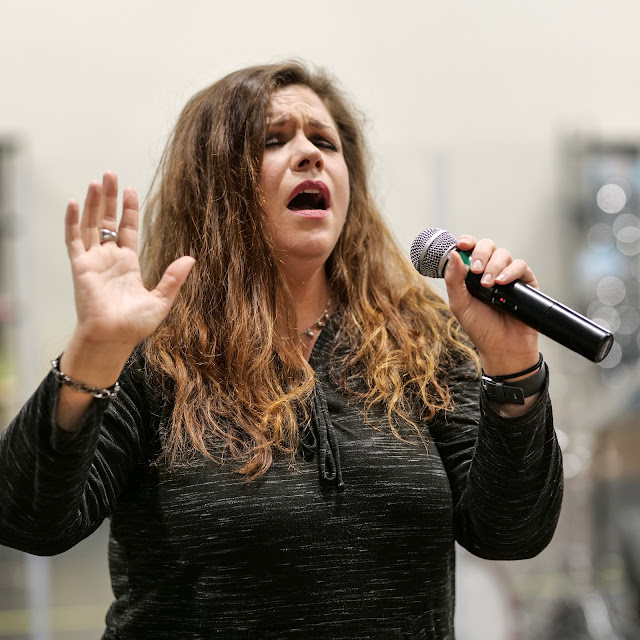 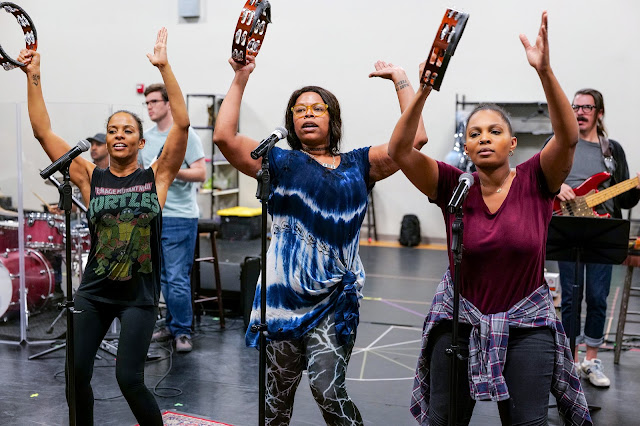 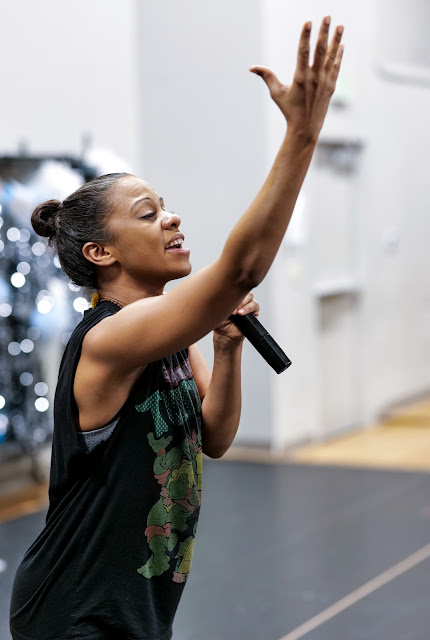 Click the images to see them bigger. Look for noise. You won't find much.... 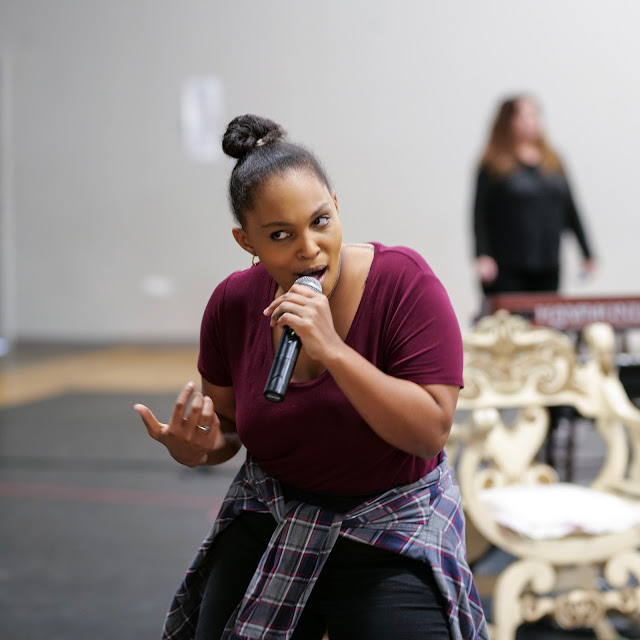 Posted by Kirk, Photographer/Writer at 15:51 2 comments: