Familiarity breeds attempt. I'm warming up to the Fuji X-100V. Setting a few things in the menu and adding an accessory or two helps. A lot. 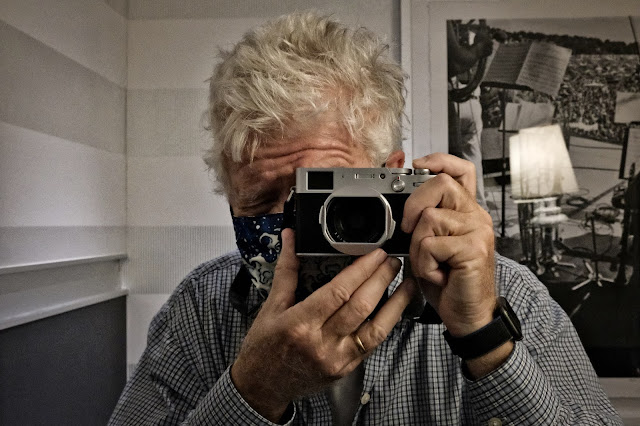 Pounding the sidewalks and dragging a camera all over the place is the only way I know to warm up to a camera. You learn a little bit more every time you bump up against an impediment and dive into the menu in an attempt to fix the roadblock. Two physical things improved my handling of the new camera a lot. First, I added a Hoage lens hood to the camera. It's made of metal and fits well. Some won't like it because there's no neutral detent to let you know when you have it placed correctly. It can rotate. But it a very stiff fit and you'll know if you rotated it and you are still sentient. The defect this cured for me is that it kept me from inadvertently touching the lens with my greasy fingers. I'm sure it will theoretically increase the micro contrast and also impart some additional grooviness to the package but for now I'm happy with the degreasing technology. 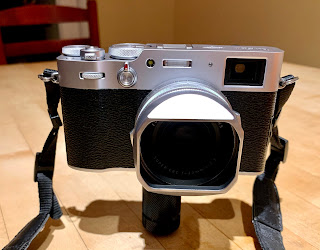 Metal Hood from a Company called "Hoage" on Amazon.com
The second thing I added was a small, dense handle that I originally bought for the Sigma fp, on a lark. It's designed to give you some additional grip on a small camera body and it screws into the tripod socket. The attachment is a small, dense knob that gives the index and middle finger of your left hand a place to grip that's safe and convenient. You won't be accidentally changing any settings. It also helps to add density to the camera to make it more stable during exposures. 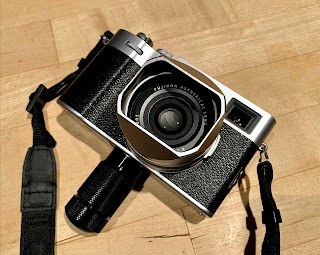 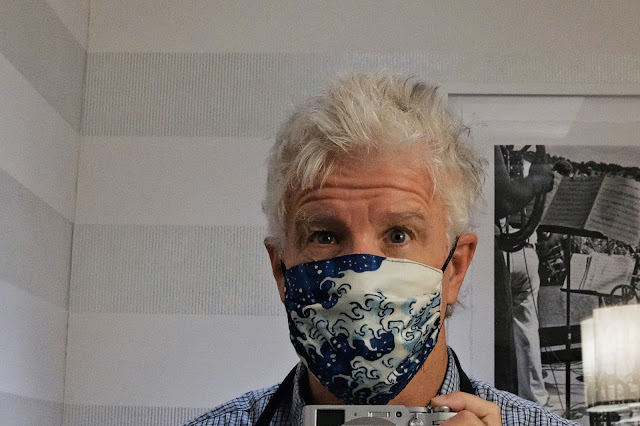 I've also taken some time to go through the menu a number of times looking for settings that might make the camera nicer to operate, at least for me. I noticed that when I have the camera set to "S" for AF and the drive setting to single frame that the camera switches the OVF to EVF and blacks out while writing the file. Then it shows the file on the EVF if I have the camera up to my eye, or the LCD screen if I have the camera away from my eye. I was able to obviate the long black out by turning off the review function entirely. Now I shoot and if I want to "chimp" I hit the "play" button and the image comes up on the LCD screen (assuming I have the camera away from my eye...). The shooting operation and the playback operation can be set separately. That's a nice touch.
I find that I chimp much less if I have to go to the button and take the extra step to review the file. I tried using the EVF instead of the OVF for general work but the EVF in no way matches the color or contrast of the rear LCD so I'm settling on using the OVF and enjoying the frame lines.
If the camera is set up just to turn on when you bring it up to your eye you'll find the battery life is much extended over the default which is to just switch back and forth between the finder and the rear screen, depending on your proximity to the eyepiece switch. My method of using the OVF exclusively is much like the operation of my favorite, old Leica M rangefinder cameras. 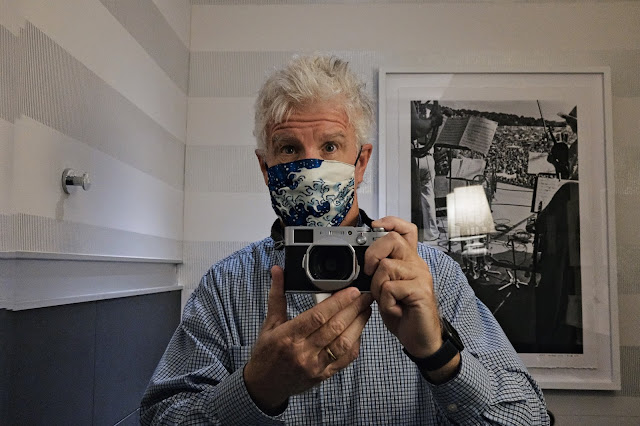 Note: middle and third finger of left hand resting on the Sigma BG-11 attachment...
Another feature I was very happy to master is the "digital tele-converter." Essentially, the camera is able to record a frame cropped into either a 50mm equivalent angle of view or a 70mm equivalent angle of view (in full frame speak). The cropped frame is interpolated in the camera so that all files appear as 26 megapixel files. Digital sleight of hand has been done to the files but it's actually hard to see without big enlargements on a sharp screen. The additional, nice part of this feature is that the 50 and 70mm "frames" are shown in the OVF, depending on which one you've selected. The framing area is commensurately smaller but then so are the framed areas in an $8.000 Leica rangefinder if you select longer focal lengths.
One advantage of the OVF and the finder frame lines (which only show up one at a time --- depending on your focal length selection) is that you can see outside the frame which can help you anticipate objects coming into the composition. It's a nice plus. But....if you want to see each of the three focal lengths filling the entire eyepiece frame you can switch from OVF to EVF and each focal length will display itself magnified (or shrink-ified) to fill the eyepiece frame. I find I prefer the size differentiation in the OVF because it constantly informs me which one I have the camera set to. There is a symbol that shows up when you set the camera to 50 or 70 in the EVF or on the LCD screen. That's nice too.
Let me backtrack for a second and admit that using the 35mm focal length on a rangefinder style finder seems more comfortable than using the same focal length on a more conventional finder like the ones in most mirrorless cameras, like the Lumix S1 or S5. I'm happier with the (dreaded) focal length on this camera than I usually am when shooting lenses in that class. 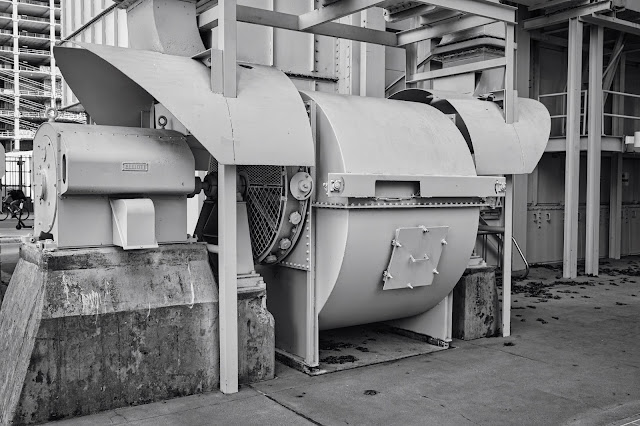 Once I mastered the non-blackout, non-review settings, figured out the digital teleconverter, remembered the different Fuji film simulations, got a decent hood on it and attached a weighty gripping surface from the tripod mount I started to feel more comfortable and less apprehensive about the camera's handling.
And that's good because I'm finding the combination of the camera's sensor and the improved (over previous models) lens to be a generator of some of the nicest files I've seen. I was thrown off balance at first because I assumed that the EVf would give me a fairly accurate representation of the final file but it doesn't come close enough. I supposed I can dial in the color in the settings menu but I couldn't find a control for gamma or contrast and for me that's just as important as getting the colors correct. Many people default to the EVF but it doesn't look like I'll be one of them.

While the focusing is pretty quick you have to know that I'm using the center sensor and using S-AF so I think we could all expect that focus would work as it should. Some day, for some reason, I'll try the focus tracking but it's not really the way I generally want to shoot with this kind of camera. I won't be doing sports with it so it seems a bit silly to get all worked up about slamming through a zillion frames while tracking an athlete running or otherwise doing kinetic stuff. I do like setting up the camera for street photography by setting the aperture to f8 or f11, setting the ISO to auto and figuring out a good hyperfocal manual focusing distance. Once you have all that set up you can generally just point the camera in the right direction at the right time and click the shutter. 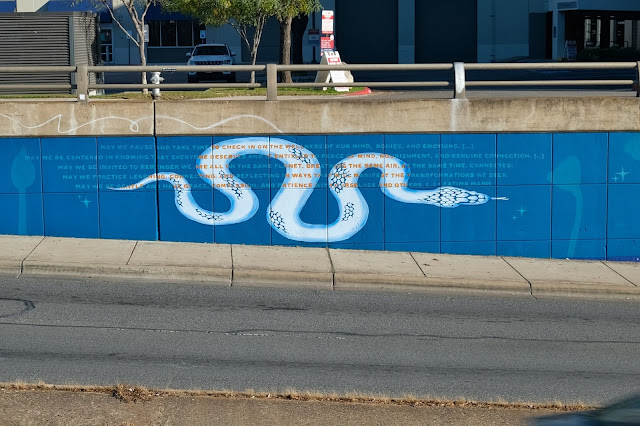 I do want to touch for just a few sentences on the exposure metering. Most of the time it "seems" a little hot or bright but I think that's a side effect of the meter being very accurate. I think we've come to expect metering to take into consideration light and dark scenes and automatically compensating for them. The X-100V doesn't seem to compensate in the same way. If I shoot a dark wall the camera aims for a neutral tone in the center of the grayscale. It's up to me to tweak it in one direction or another to compensate for light or dark scenes. I get a lot of use out of the EV dial and even though I've only done three, two hour long forays with the camera I'm getting a good sense of how much to compensate exposure based on how light or dark the scene in front of me might be. It works and it's very predictable and to me that means it's accurate. You just have to zero in your methodology based on getting to know the metering characteristics of this camera model.
Because of my previous experiences with Fuji cameras I seem to have over-bought on the 126S batteries. I have four of them. I could have called it quits with two since the camera is parsimonious with electricity. It's also chargeable via the USB-3 plug so I can pop in a cable while I'm driving somewhere and recharge fairly quickly.

One my point of interest to me and then I'll let it rest for a while. I had some misgivings about buying a modern camera without image stabilization. I guess I've subconsciously bought into the hive prejudice that image stabilization is now as vital as being able to actually focus a camera. I've found that once I added a touchable extension to the bottom of the camera and practiced my old rangefinder stance I've been able to photograph non-moving objects at hand held shutter speeds down to about 1/15th of second with consistently good results. Couple that with a fast, sharp lens, a zero vibration body and fairly noise free ISOs to past 6400 and all of a sudden, for the most part, I.S. becames inconsequential. Would I like to have it? Sure. But for almost everything I'd use this camera for we'll have more than enough light to allow for high enough shutter speeds as necessary. Perhaps the whole design of the camera and the lens has a tighter integration between them that makes files sharper from the get go. It's a thought.
So, am I regretting having bought the X100V? Not in the least. It's a good, little camera that reminds me in a very nice way of the years I spent shooting rangefinder cameras in the film days. It's simple, direct, non-threatening and fun. Just work to personalize the menu and the physical touch points and it works like a champ. More to come later. More photos below. As always, click to enlarge. 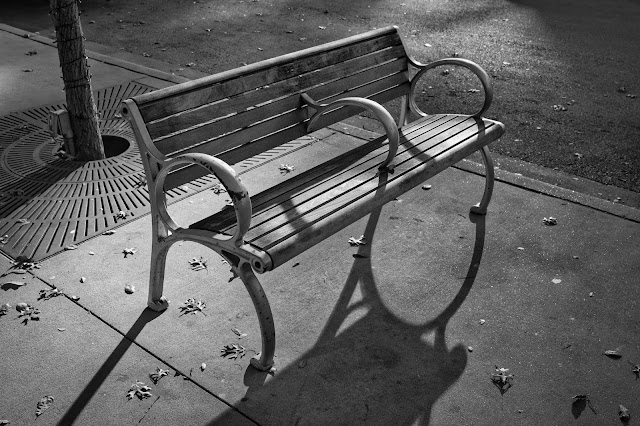 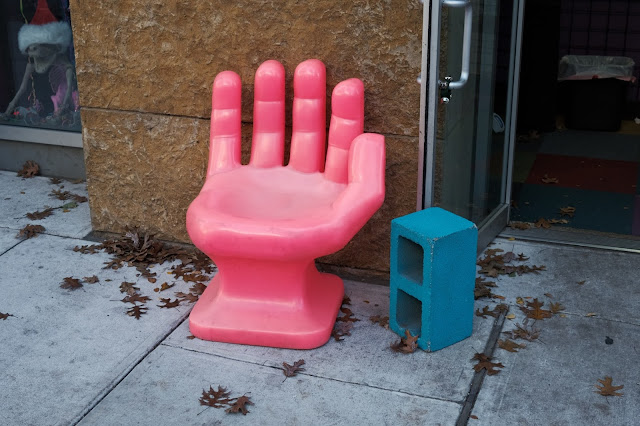 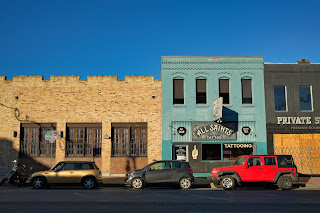 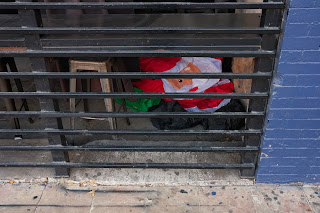 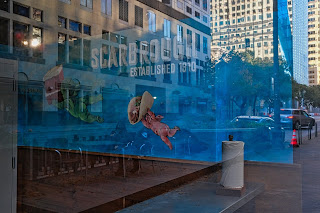 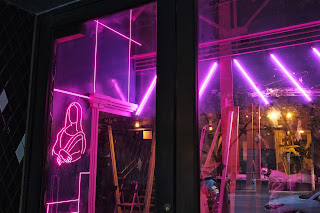 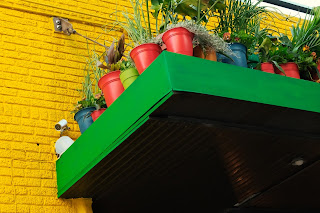 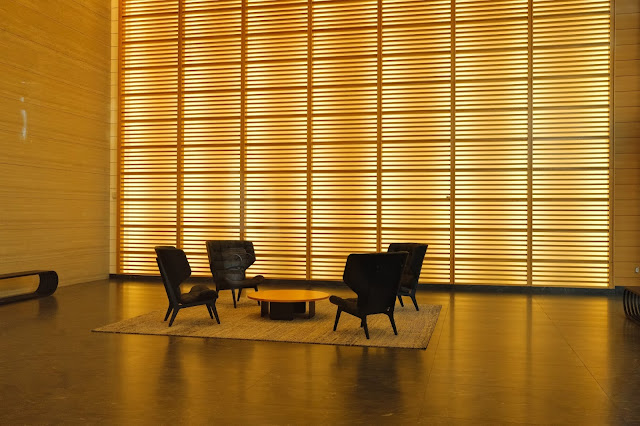 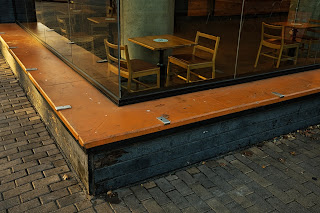 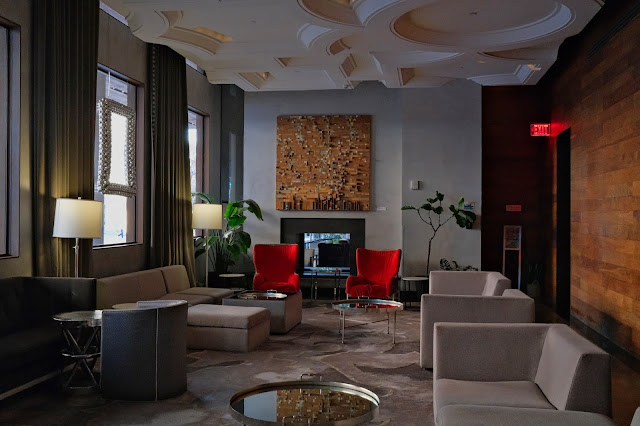 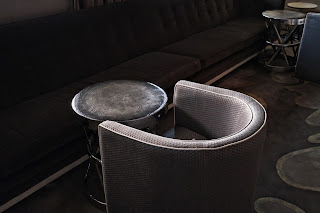 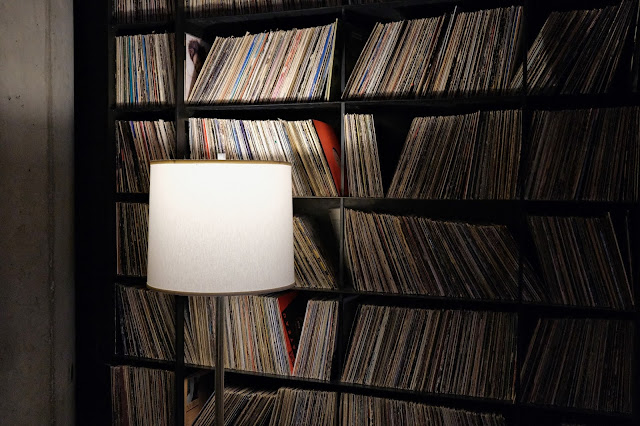 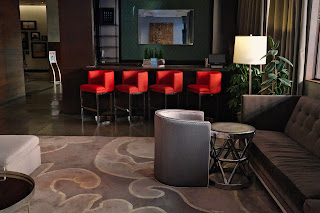 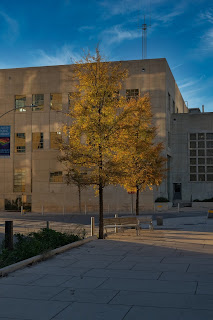 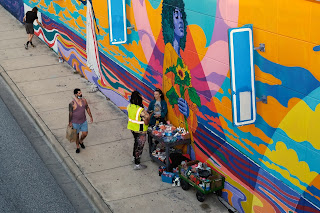 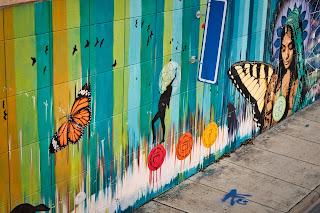 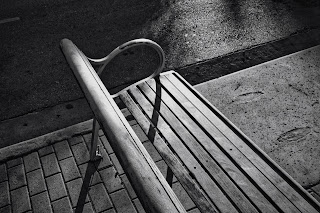 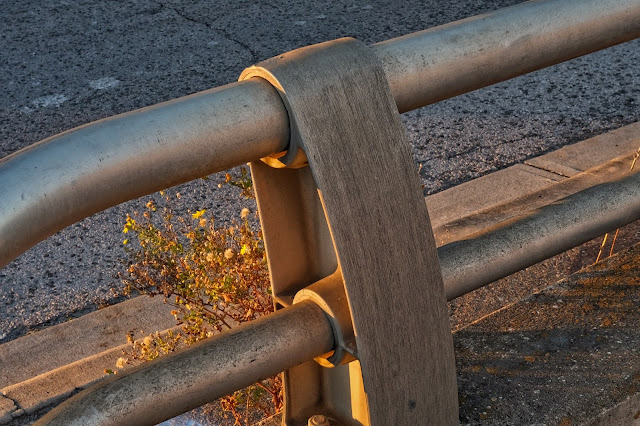 that 70mm focal length is nice to have.
Yes, I know I can crop in post. I could macramé my own car seats too, if I had the inclination.
Posted by Kirk, Photographer/Writer at 20:49 11 comments: