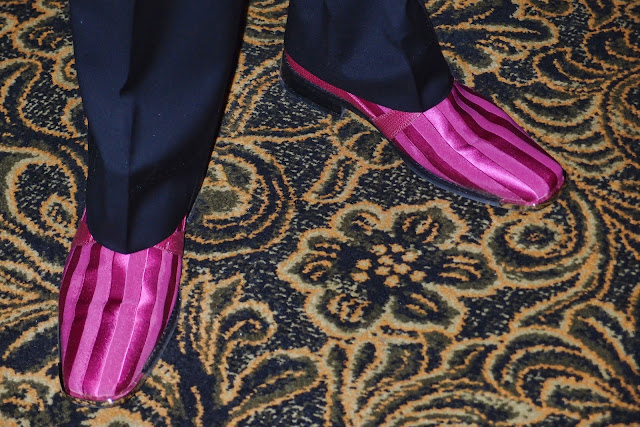 Dave Steakley's shoes.  Perfect with a black tuxedo.
Belinda and I went to the $300 a person, super deluxe, wonderfully fun, fund-raiser for Zach Scott Theatre last night at the downtown Hilton.  The event is called, Red Hot and Soul, and this year's theme was the 1960's.  Bee hive hairdo's and Sgt. Pepper outfits we well represented as were pink suits for men and "Madmen" fashion for women.  The culturally clever even made reference to, La Dolce Vita, with some pretty stellar sunglasses.  Tons of great music.  Mercifully short speeches.  And best of all,  NO SILENT AUCTION.
Since I wasn't working I didn't take a serious camera but I did take along a camera I almost condemned.  See,  I was just about to send Olympus back their ZX-1 for a list of what I considered, "design faux pas".  I'll list them and we'll get that out of the way:  1.  You charge the tiny battery in camera with a USB charger.  All cameras should come with chargers that allow "out of camera" charging.  And the camera size shouldn't be so small that it compromises battery performance.  2.  While we're on the subject of small !!!!!!  Things can be too small.  I don't have big hands but I felt like my hands were the size of catcher's mitts when handling this one.  And the buttons.......they are made for ants.  3.  The camera is way too thin, front to back to hold comfortably.  Really.  Were they trying to become two dimensional?  And is that a selling point?  This is why serious photographers opt for a Canon G12 instead of the S95......there's more to hold onto.  And finally, of course, #4.  The menu and interface operation still sucks.
But I stuck it in my pocket with an EV-2 finder on the top and we went downtown.  I had the camera set for auto-ISO, AWB, and auto flash.  Sometimes I turned off the flash.
So,  I wrote all that negative stuff above.  Why am I still writing?  Because I like the photos I got out of the camera.  Because it locked focus in a very dark room very quickly.  Because the flash was nuts on every time.  Because I could use the eye level viewfinder from my EP-2.  Because it has a raw mode.  Because it has a built in neutral density filter.  And because the battery didn't run out.
I'm keeping it for another few weeks and then I'll decide if it really deserves a big review or not.  I will say that Belinda thought it was wonderfully small.  And it's a good reminder that not everyone is looking for the same things on their cameras. 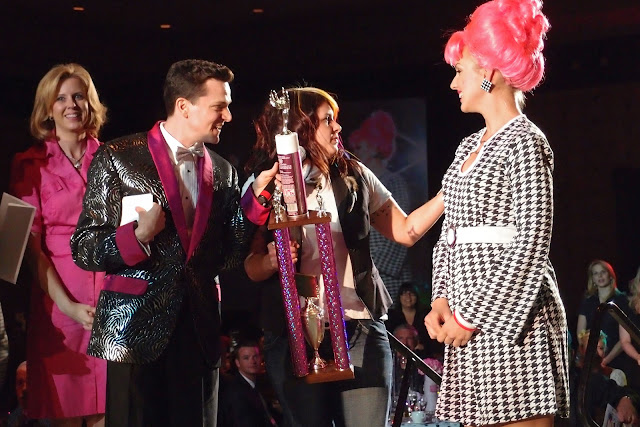 The Winner of the Best Hair. 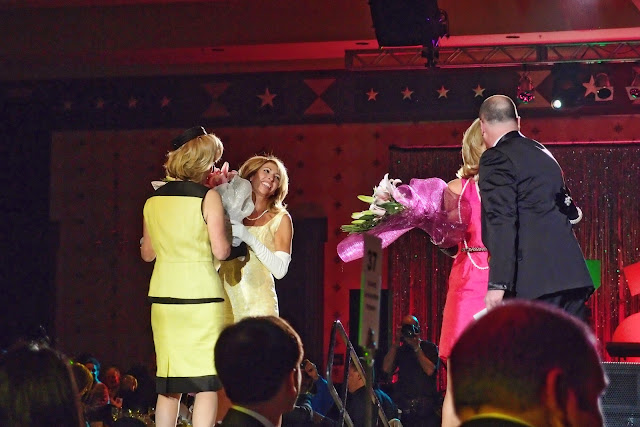 Kissy Face with the managing director, the artistic director and the two incredibly dedicated board volunteers who filled the giant ballroom to its fire code limit with generous donors and fans of live theater. 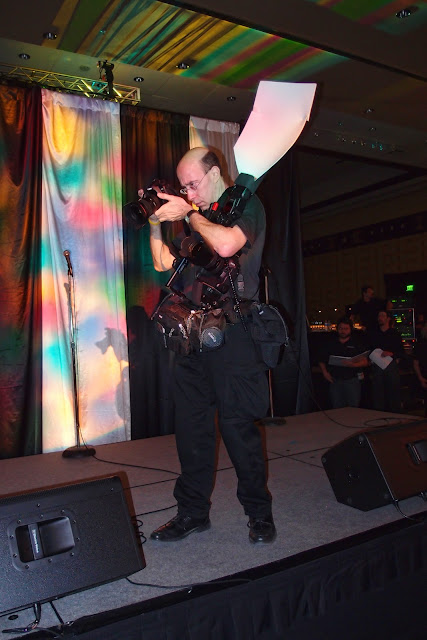 And...what does a grisled old pro like me do on a night off?  Well I certainly take a moment to check out the photographers (there were three) who were working the venue.  While I am the official photographer for the Theatre I only do the shows and the creative marketing campaigns.  I don't do the "grip and grins."
Above is my favorite photographer of the night.  Dressed in a black shirt (approved) and black paramilitary cargo pants (neutral)  he got extra sartorial points from me for the matching it all up with a good pair of black shoes.  Lost points for wearing at least five big pouches all over his tactical belt.  But what amazed me was the size of his flash reflector.  Instant award for the biggest one I've ever seen.  Black Rapid (camera suicide straps)  on one each of a 5Dmk2 and 1Dmk4.  The only two lenses I saw him use were the 24-70mm and the 70-200.  I'm dying to know what was in the five cubic feet of bag space hanging all over his belt........
I'm dying to see the photos.
Added at 6pm CMT:  The interview with Michael O'Brien goes up at 1 am Monday morning.  Thanks.
UPDATED:  The photo gallery from the photographer has been posted and it's pretty darn good.  Guess he had some magic in those little bags!
Here's the link:http://www.austincandids.com/gallery/v/austin/rhs11/
Posted by Kirk, Photographer/Writer at 12:48 18 comments: