Amazed at just how good digi-cam video can be. The super power of the GH3. 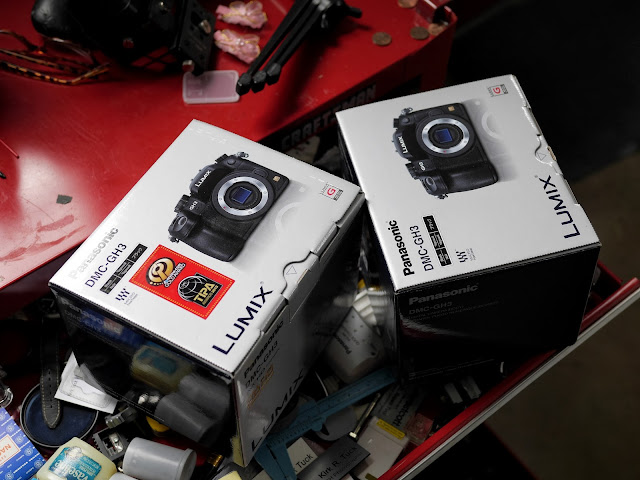 Out of long habit I believe that any camera worth having as a work tool should
have an identical or nearly identical back up. Buying GH3's as a set means
only having to master on video menu at at time.

The Panasonic GH3 is a good still camera. The quality of the files is not quite as good as that which I get from the Sony a99 or, at lower ISOs, the a850 which are both full frame cameras but the Panasonics do quite well when compared to a large range of cameras I've owned in the past. But as good as their still imaging capabilities are I did not originally buy the GH3s as replacements for my full frame Sonys for still use, I bought them because I had seen some quick video work done on one by a close friend and I was impressed by how much better detailed the files looked and how clean the overall feel of the video was.

I was busy to the point of being overwhelmed when I bought the cameras so I didn't immediately test the video. Oh, I shot some stuff in the office and made a few available light tests but I didn't really do the kind of test that would emulate the work I would normally do with the camera in the field.

Yesterday was my first chance to do some real, on location work with the GH3 and I want to tell you that I was very, very impressed by what I saw on my monitor this morning. Very impressed. If you have no interest in video you can stop reading here because I'm going to talk more about video.

As an aside I want to mention that I purchased both GH3s from my local, "bricks and mortar" retailer for the same price as any other customer. It's the same price you would pay for the cameras at B&H or Amazon.com.

Further, no one at Panasonic offered me anything of any value to shoot, test, buy, enjoy or write about their products. I am writing this because I am impressed by what I consider to be a very inexpensive tool with a very high value to purchase price ratio. No past or future promise of consideration from Panasonic or their assigns was proffered.

Here's the story from yesterday: I was hired by long time client, Zach Theatre, to concept, shoot and edit together a public service announcement video (commercial) for one of their holiday plays based on the movie, It's A Wonderful Life. I'm sure you know the movie, it's the one with Jimmy Stewart and it takes place in Bedford Falls. Jimmy Stewart's character, in a moment of suicidal crisis is given the divine gift of seeing what life would have been like for his family and friends if he had never been born.  One of my favorite actors, Martin Burke, does all 37 major parts from the movie in a one man play.

I wanted to shoot Martin doing some of our favorite characters' lines. I went to the theater and set up on the stage. I wanted to shoot pretty tight. Just a little looser than head and shoulders. We set up a GH3 on a Manfrotto tripod, topped with a 501HV fluid video head and established a "mark" for Martin and worked out a good camera height for the feeling we were trying to convey.

Martin was lit by a few of the white stage lights (all overhead fixtures) and four of the Fotodiox 312AS LED panels I bought last year. Two of them were used as back lights, one as a main light from camera left and the other, used much further back, as a fill light. All of them were set halfway between tungsten and daylight using the rotary color temperature control knob on the back. All four light units pack nicely into one small Pelican case, require no power source other than their own batteries and have the stamina to shine on for hours. Of all the lighting I've bought over the year these have proven themselves to be very flexible light sources and useful in a range of applications.

I keep trying and buying various micro four thirds cameras because I have a large number of older, manual focus Olympus lenses that were originally made for their line of (film) half frame cameras in the 1960's and 1970's. The lenses are beautifully made and, in many tests, mostly hold their own with even some of the best lenses on the market today. I keep looking for the perfect cameras to use them on and I think I'll be pretty happy using them on the new Panasonics. If I get further into the m4:3 world I might pick up an Olympus em-1 just to see how the lenses work with the five axis IS... but that's a whole different story.

I took along a range of current Panasonic lenses but I was leaning toward using several of my favorite Pen FT lenses and I did end up shooting almost all of yesterday's footage with the 40mm 1.4 Zuiko lens. In the video mode just touching the rear screen brings up a magnified window of the image and allows for very sure fine focusing. Additionally, once the magnified window appears you can use the touch screen and your finger to move the magnification window anywhere on the screen. Very convenient for situations where the important feature which needs to be in focus isn't centered.  I used the lens two stops down from wide open at f2.8.

The camera, in movie mode, was set to manual exposure, the .MOV mode (for much easier editing) and it was working at 1080p, 1/60th of a second at 30 fps. My basic ISO was 640. I was able to do a custom white balance for the mildly mixed lighting and achieve perfect flesh tones and a perfect over all exposure as confirmed by the onscreen histogram. That part being set we moved on to designing the audio.

I used a custom microphone stand to hold the Rode NTG2 shotgun microphone in position about eight inches above Martin's head and about eighteen inches in front of him. The microphone (with foam windscreen) was aimed just slightly below Martin's mouth. I used a transforming cable to match impedance and connector types for the camera's standard 3.5mm mic input and I set the levels so that Martin's voice, in character, caused the meters to get close to pegging red but not quite. Additionally, I was able to monitor the levels and change them on the touch screen, even while recording. If something was a bit hot I could see it, adjust and then have Martin run the line again.

We were able to monitor the audio that was being written to the camera's SDHC card via headphones. There's a software switch that allows you to monitor the live sound or the recorded sound. I suggest that you'll want the second option so you can really hear whether or not hum or other noise is being added in your recording.

Since the camera position was outside the circle the lights were illuminating and no stray light was hitting the rear LCD screen the art director and I thought we could see very clearly that we were getting really good quality video..... but you never really know until you get the footage up onto a large monitor and you can really pixel peep it. We shot what we needed in our allotted time yesterday and then I came home for a dinner and movie date. It was only this morning that I first saw the raw footage on a big, calibrated monitor for the first time.

I was so impressed I came back into the house to get my son and have him look. Ben is an accomplished film maker, has logged a lot of hours shooting and editing in FCPx and I value his opinion (and his younger eyes). He too was impressed by the look of the video. Even with the standard color setting on the camera the image wasn't too saturated and the colors were right on the money. Equally impressive was the level of detail and the sharpness of the files. And all of this was without any post processing whatsoever.

I have perhaps two or three days of post production to do on this project over the course of the next week and I am looking forward to it. These .MOV files go straight into Final Cut Pro X without the need to transcode. With a few very minor color tweaks this footage will look fantastic. And the bonus in this project is just how good the audio is. It's clean, natural and coming through at appropriate levels to make sound sweetening pretty simple.  In my book that's pretty darn cool for a camera that cost me less than $1,000.  Happily.....or sadly (depending on how you look at it) this camera, as a video production tool, blows the Sony a99 AVCHD format footage right out of the water.

One more check on the plus side of the column for the GH3 is that fact that it's still imaging performance is really good too. 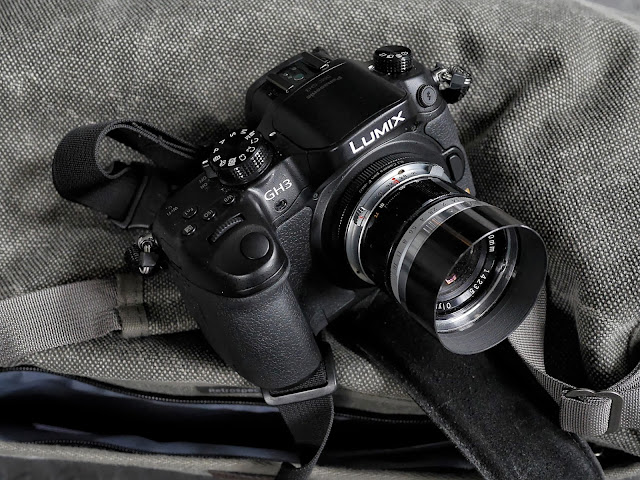 Below are a couple shots from the side show part of the Formula Une weekend we lived through earlier in the month. The cycle riders where there to promote the "X Games" which are coming to Austin in 2014. The air brush painting commemorating the F1 GP was just a nod to Kitsch... 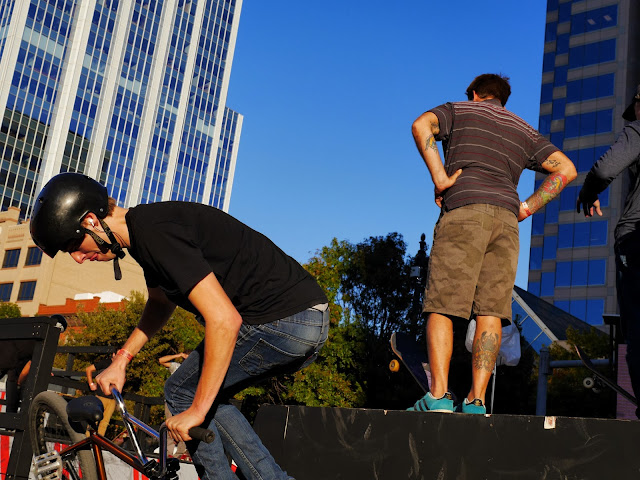 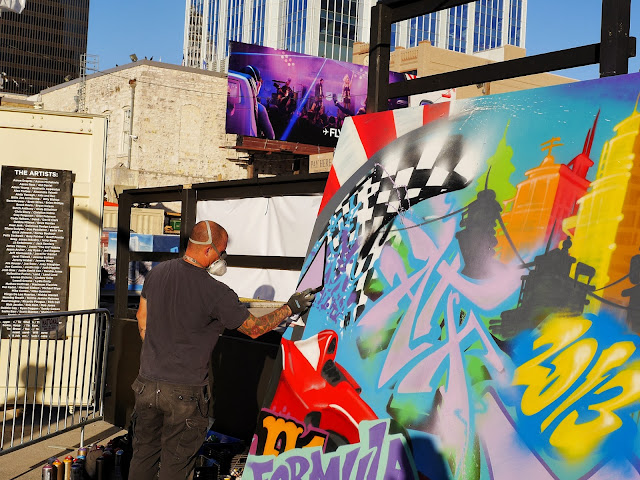 As soon as we have the "Wonderful Life" video cut together and approved we'll toss it up onto the VSL site.

In the meantime remember that Craftsy.com is offering one of my classes for free. Head to the site and take a look around....

Posted by Kirk, Photographer/Writer at 16:35 14 comments: